We woke up at the BLM campground south of Battle Mountain to assess the site in daylight. It looked like a lot of people had camped there on the previous holiday weekend and trash was still overflowing the garbage cans. It must be a hunting camp because the picnic table was covered in blood stains, maybe somebody cleaned their deer? Something worse? We tried not to think about it too much and packed up quickly to leave.

We rode the 20 miles back to Battle Mountain to where else? The Owl Club for breakfast. Soon it was back on the dusty (literally) trail. We came across an abandoned car, this person wasn’t as successful on the TAT.

The track was as difficult as the previous day with long stretches of sand and ruts. Jon was riding at a very significant disadvantage with his sprained right ankle. It was challenging for him to stand and painful if he needed to put a leg down in a turn or tricky spot. Sometime before noon Jon crashed again trying to negotiate a tough spot with only one good leg. Ouch, sprained the other ankle. This sprain (right) ended being much worse than the left.

With nothing to do we didn’t dare remove his boot so we dusted off and rode for another hour before we came to the Chimney Dam Reservoir with water access. We decided to take a break to inspect Jon’s ankle and soak it in the lake. We set up our camp chairs and rested for a while.

Back on the trail at a slower pace we continued into the Humboldt National Forest eventually coming to a 7,000 foot pass where we stopped for a few pictures. I took this picture looking east, where we came from.

It was windy, Weston and I took a break off the bikes but Jon decided it was less painful to stay mounted. Getting on an off the bike was a painful challenge which had one advantage, when we got to locked gates Jon was excused from gate duty. I would open the gate and Weston closed them.

Glamor shot of the little 250 that could.

Soon we were riding down the West side of the pass, you can just see Weston’s dust.

By 5:30 in the evening it was starting to get dark in the mountains and we had gone 160 miles without seeing a person, building, vehicle or most importantly a gas station. A little worried about our gas situation and not wanting to repeat our late night from the day before we decided to look for somewhere to camp along the trail. We came across this somewhat level wide spot on the trail and decided to call it a night.

We got Jon wrapped up and situated on the best chair. Good thing he still had his cane with him.

Weston was on dinner duty, corned beef hash in tortillas.

I climbed up a nearby hill to see if there might be a cell signal, there wasn’t but I got a good picture of our camp site.

We were tired and sore after another long day of difficult riding and quickly fell asleep in our remotest camping spot of the trip.

The most excitement we had in the night was a small herd of cows that ran down the road, I think we were in their regular sleeping spot judging by all the cow pies in the vicinity. We packed up without any problems and continued down the road. After about 20 miles we were in McDermitt which is on highway 95 and the NV, OR state line. We filled up our gas tanks and extra fuel containers and had a big breakfast at the local casino.

Soon it was back on the trail. The dry hot weather was changing and the day was overcast with cooler temps and some rain. There was still a haze in the sky from nearby forest fires. As usual we came across many gates so we settled in our pattern of Jon waiting for Weston and I to have gate duty. I didn’t count but there must have been 20 or 25 gates.

After about 60 miles we came to Denio Junction. We were warned that there was no gas there and it was recommended if we need fuel we should detour 20 miles north to Fields, OR. We decided to empty our extra fuel containers into the bikes and continue on.

It started to rain so we donned rain gear before moving on.

The further west we got the road became more and more rocky, eventually coming to some steep hill climbs on loose rock. I tried to take a few pictures but the hills never look as steep in pictures.

This was tough going, especially for the old guy on the 250 (me) and even the young un-injured guy (Weston) but it was especially hard on the guy with two bad ankles….. 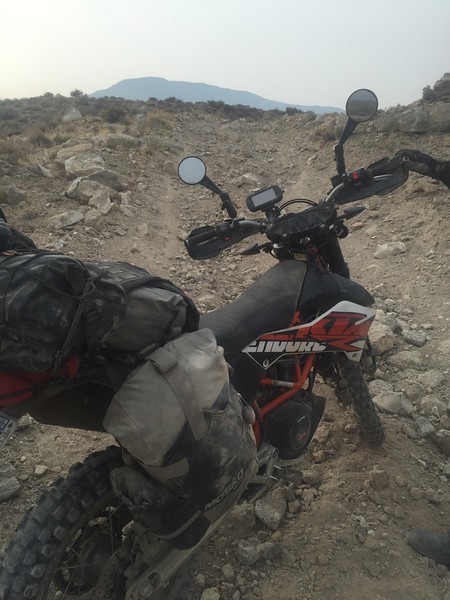 At one particularly bad section, unable to use his legs Jon just decided that instead of another painful crash it would be better to hop off when he lost momentum.

Again, the pictures don’t show how steep and difficult these sections were. The difficult riding continued, we weren’t in Kansas anymore….

Another long day of challenging riding with no gas stop since morning and slow progress. After 130 miles for the day it was getting late so we started looking for camping spots. We almost pulled over and “cowboy” camped in another wide spot in the rode but decided to keep going a few more miles when we came across this! 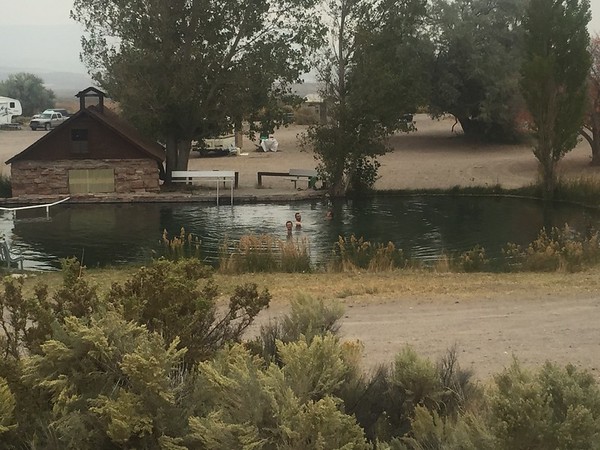 A camp spot in a Dufurrena Ponds wildlife refuge, no charge and a genuine Hot Spring Pool! Wow, how cool was that. We would have jumped right in but decided to wait a few minutes for an amorous couple we startled to finish their turn. It ended up being more of a Warm springs than Hot but we didn’t care after not having showers for days.

In addition to the hot (warm) pool, the building had showers with the same water that just ran 24/7. We all took advantage of the chance to get clean with actual soap and shampoo.

The weather was threatening with high winds but we stayed dry that night.

I was glad I reinforced my tent with a bungee to the mighty 250.

There were a lot of these rabbits with big ears running around. We had been seeing them for the last few days and I just happened to get a picture.

Strong winds continues throughout the night and it was cold but we survived intact and had a relatively good nights sleep.

I’ll take a break here, tomorrow…. Oregon, the last state in our adventure.

Thanks for following. Donn, Jon, Weston.