This was the day we were going to ride south from Bahia de los Angeles on the dirt road to San Francisquito. It is a well worn route for ADV motorcycle riders with a certain reputation for having some tough sections. I had contemplated doing this route on previous rides but decided against it on the bigger bikes. It turns out that was a good call…

The road south ended up being mostly fast washboarded gravel. The rough road bounced our bikes and we finally had to get the speed up over about 50mph to “glide” over the top of the bumps. About a mile south we saw a motorcycle on a smaller Beta bike stopped and looking around. His Garmin Montana GPS mount broke in the washboard and the unit went flying somewhere in the sand, bummer. We stopped and helped him look to no avail.

The road was fun and not overly difficult through some turns and peek a boo views of the Sea of Cortez.

Around one of these corners there was a group of 4 riders stopped on the side of the road including the guy with the lost GPS. Three of them were on small bikes like us and one was on a big GS1200. He was the one with a flat tire. By the time we arrived they had the tire off the bike and were getting ready to apply a patch to the inside. Hmmmm, wait a minute, doesn’t the GS1200 have tubeless tires? Yes. And why the patch? Well, the big bike with the extra weight and from what I’m told, high speed, hit a pointed rock just right and put a split in the tire. We hung around a bit to make sure they had everything they needed before we resumed our route south. I wish I would have thought to take a picture.

Lots of interesting rock formations, it almost looks like a stacked wall here.

Soon we arrived at an intersection where a eastward track goes to the small community of San Francisquito and turning west goes to El Arco. At the intersection there was a motorcycle stopped and what looked like a guy laying on ground under a shade tree? An accident? Of course we had to stop. Evidently it was nap time as this rider was waiting for his friends. We found out he was guiding a tour and the riders with the flat were with him. I told him I thought he might have a long wait and we spent the rest of the time talking about the route. Yes, the route to El Arco was what I had heard of and was notorious for about 70 Km of sand. It was to early to stop so we decided to make a right turn and hit the sand.

It was hard work but we were doing it with no spills, really, Deby did great. The key is to GO FAST! The small bikes helped of course. About halfway through we found about the only shade and took a break.

Saw this growing in the desert, not sure what it was.

On and on we rode until thankfully we eventually connected with Mex 1.

It was a long offroad ride as we were reminded when we made it to the  Vizcaino Pemex on fumes, about 180 miles in total.

The next stop was the wonderful city of San Ignacio, one of our favorite places to stay for a few days. We arrived at the San Ignacio Springs resort just before dusk. We stayed there before in their Yurts and had struck up a friendship with the owners Terry and Gary. Rumors among the other riders we met were that the last hurricane flooded them out and they were out of business. We were relieved when we pulled in that not only was the resort still there but Terry came out with fond greetings. Except…. they were full.

Not to worry though – Terry sent us down the road to a new hotel, La Huerta where we had an excellent room for the night.

Behind the hotel was a huge grove of orange trees. We then learned La Huerta means Orchard in Spanish. We went out for a walk and saw these trees full of vultures with flocks flying in the air.

We were glad to walk to a nearby cafe in the main square for a nice meal and beverage to wrap up an excellent day of riding.

Old town San Ignacio is a fun place to hang out. Most travelers in Baja pass through and make a stop. We spent a long time talking to some guys on Harleys. Just goes to show the roads are just fine for big bikes down here, even Harleys (Jeff….). 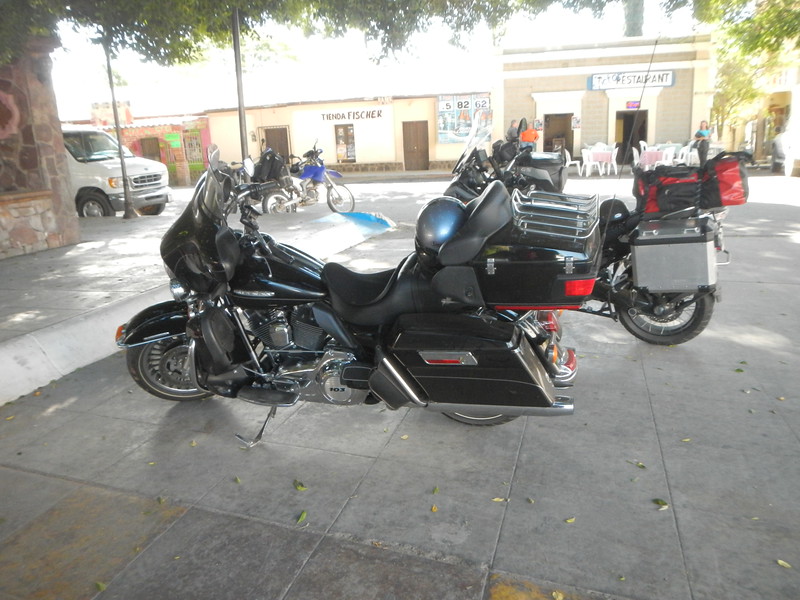 On the square is the Mission.

Terry had openings for two nights so we reserved them and the next day moved into the Honeymoon Yurt. This one is complete with concrete walls (better to withstand hurricanes) and an indoor bano.

Even a nice patio where we spent all day reading books and relaxing.

I’m glad we took the time to rest up. The next day was hard.

Thanks for following and thanks for all the comments, we read them all and love them. WiFi is really hit or miss so it’s difficult to reply to all of them.