As I write this we are getting ready to leave Sucre tomorrow, I’ll miss this city after being here a little more than a week. If you are only interested in the motorcycle riding part of this blog skip this post, the motorcycles are tucked into a parking lot some blocks away and haven’t been touched in a week. If you are interested in my take on this Bolivian mountain city of 700,000 people and why we like it so much, read on…..

First of all, we totally scored one of the best hotels in town and even better with some smooth talk in my improving Spanish we managed to get the penthouse suite on the third floor with wonderful views for the same price as a regular room. Nice. We also learned Sucre is famous for Spanish immersion schools, hummm, Something we’ve been wanting to do so we decided to dive in and give it a try. After some research we ended up signing up for classes at the Me Gusta Spanish School. Click on the link to learn more. I would recommend it to anyone interested in improving their Spanish skills.

We arrived on Friday February 3rd and arranged for classes beginning on the following Monday. That gave us the weekend off the bikes to check out the city.

It’s known as the white city. Why? We learned on a walking tour that it is because the buildings are painted white. Ha, go figure..

Narrow colonial streets full of people, cars, buses and motorcycles of every shape and size. Like many Latin American cities it was organized chaos.  Sucre, however, seemed more organized than chaotic. The road in front of the main square was always bustling.

Here’s another picture for my friend Gary who drives a bucket truck for Seattle City Light…. safety third. 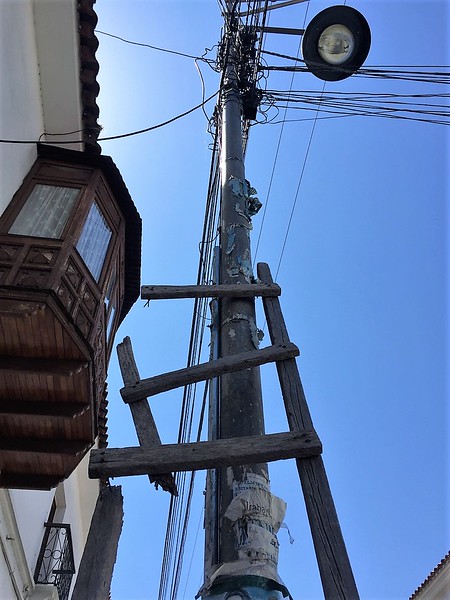 Kids everywhere playing and climbing on the statue in the main square.

Bolivia is home to the largest indigenous population in South America, I was told is is over 40% of the population. The new president is a supporter of the indigenous people and has put policies and laws in place to support their way of life. Really different from what we’ve seen in other parts of South America.

Here is the view from our deck on the first night. No modification was made to this picture.

Here’s me, nice place to hang out with a cool cup of water (off the booze due to the high elevation).

The view from our deck, ever changing with the weather…super nice.

The city has a very vibrant market that was only blocks from our hotel. It is open every day and we were able to route our daily trek to Spanish class to walk through the market in the morning when they were opening and loading produce for the day. Get ready for a bunch of colorful market pictures…. 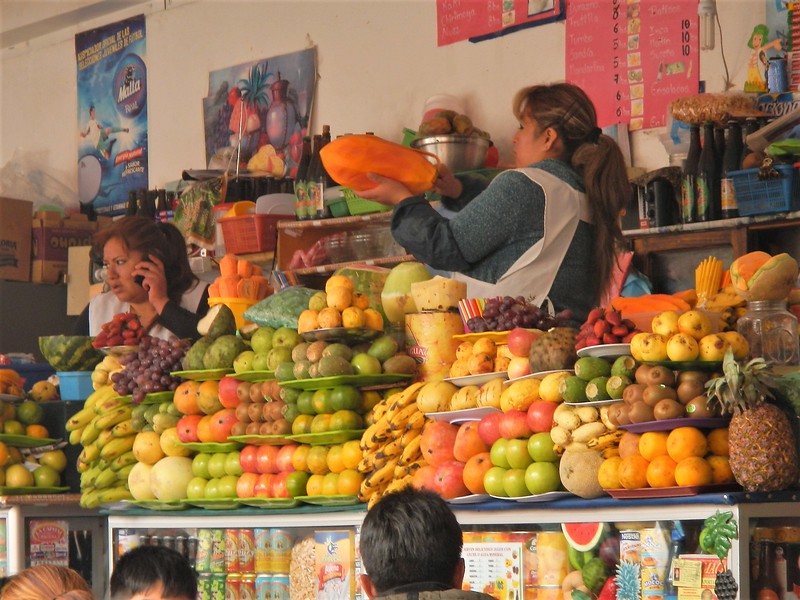 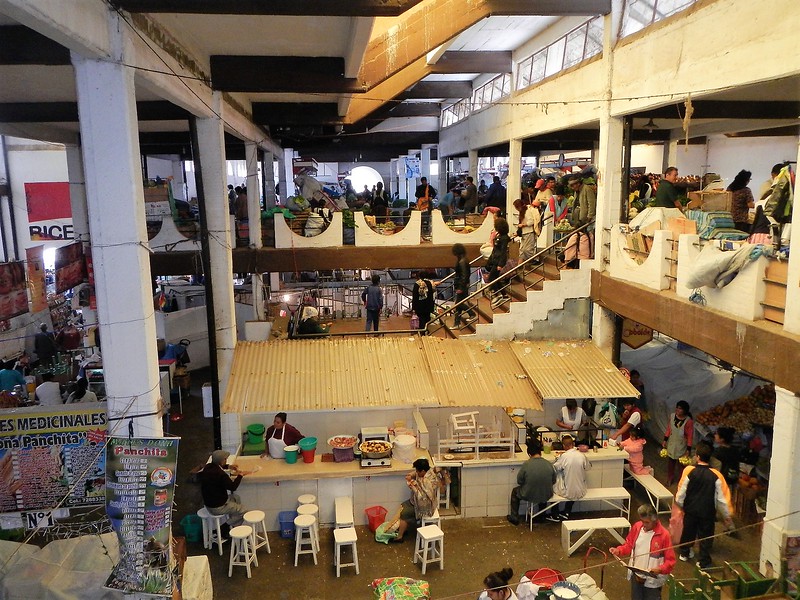 I love this next picture. We are sensitive about taking photos of people and usually ask permission. Often the answer is no. Deby took all the market pictures and had to sneak a few, this next one included. This woman was there everyday, I never saw her awake.

They had the cake section with booth after booth of cakes.

Here is the potato section, bags, bags and bags of potatoes. I was told over 50 different kind. 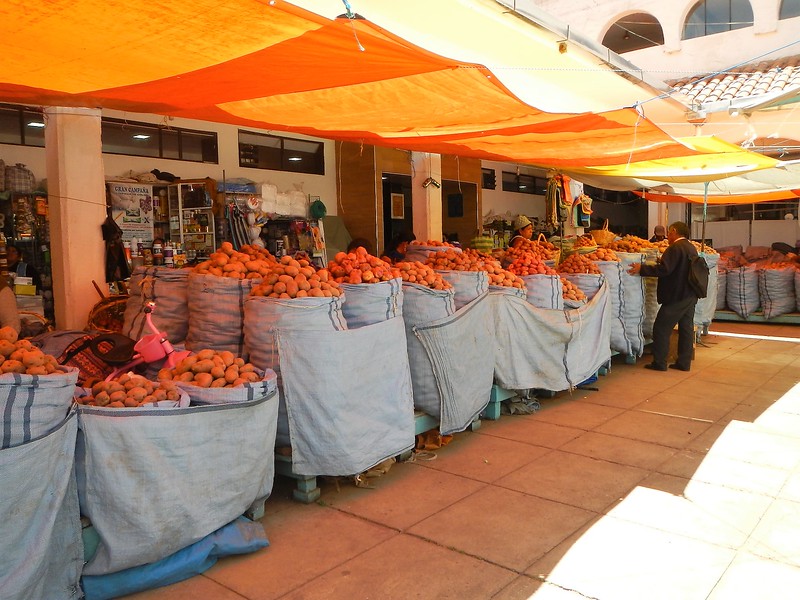 As part of our Spanish class we went to the market and were taught how to buy fruit and ask typical questions. It was fun. 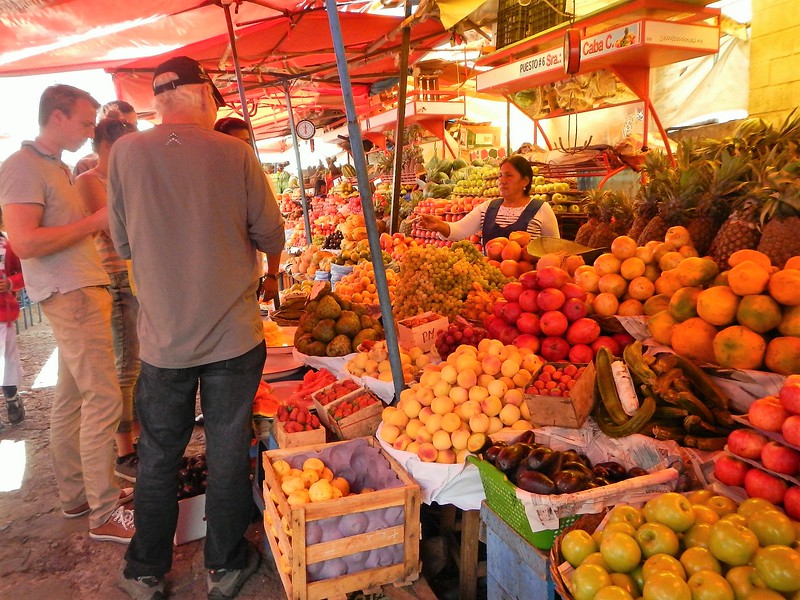 We learned the names of new fruits that we sampled. They tasted really good but we immediately forgot the names.

There were about a dozen of these stands. We learned they are juice stands where they will make you any kind of blended juice drink you can think of. You go up and order your drink and then wait in the chair. After some time and the whirring of a blender drinks appear. Each booth had a number of chairs and all the chairs had people sitting drinking their juice concoctions. We learned the Sucre is very proud of these juice bars, they should be, it was delicious and refreshing.

The meat department, like most meat sections in markets can be somewhat disturbing. Deby had to sneak pictures and at one point had someone throwing meat at her as a reprimand for taking a picture. She got a good picture and we hurried out of that part of the market. 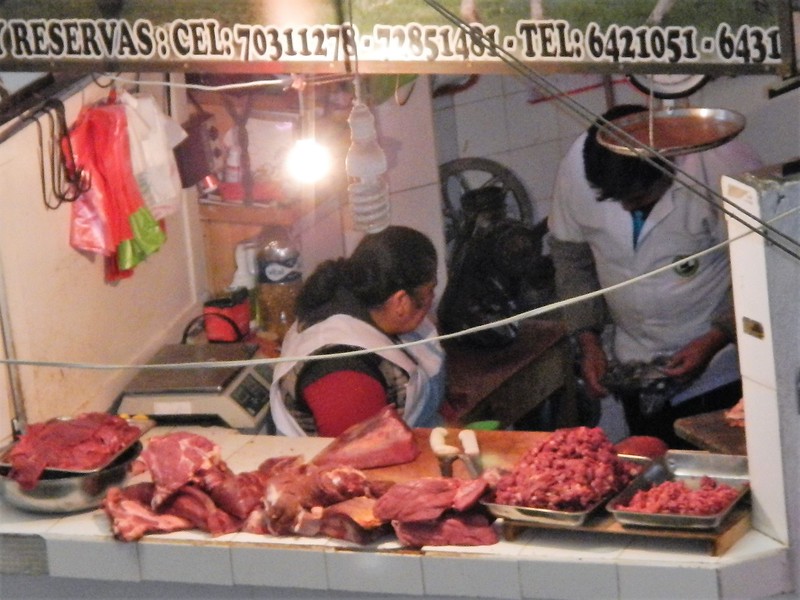 Ok…. gross alert on the next picture.

What the? It’s from a cow. We learned that cow tongue is a delicacy here and we had a lengthy explanation from a local we met about how it was prepared and how good it tasted. He said Sucre is famous for it and we should try it…. Umm, maybe? I don’t know though.

The street life was just as vibrant with people everywhere, children in school uniforms, people selling things and like I said, general but organized chaos. Does that make sense?

Maybe most endearing was the little kids who were drawing chalk drawings on the sidewalks for money. Deby, being a softie for kids and art was a good patron of these little artistas. Here is only one example, most of the kids seemed to be about 5 years old and some were really good artists.

Loading huge produce into the market in the morning.

Seriously Costco has absolutely nothing on this part of town. 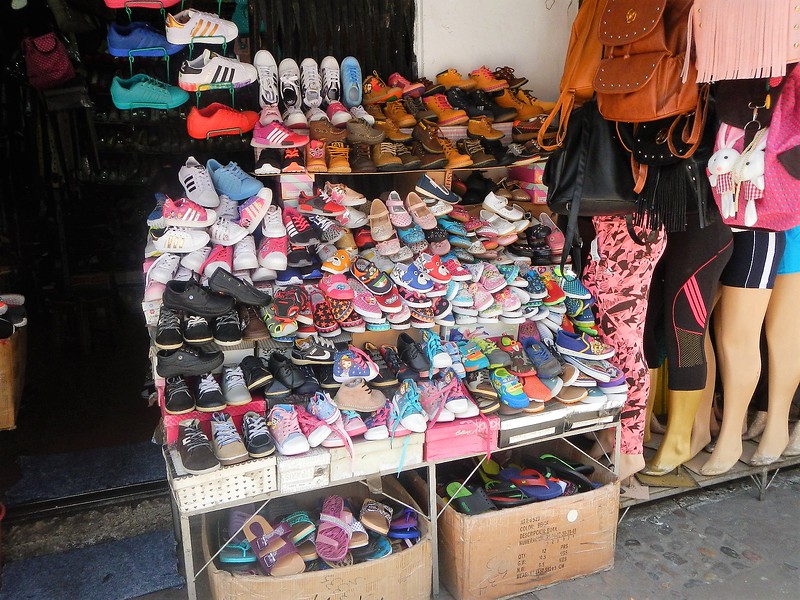 Oh, and the motorcycles…. got to love this!

This next one if my favorite….. the little kid was actually sleeping!! 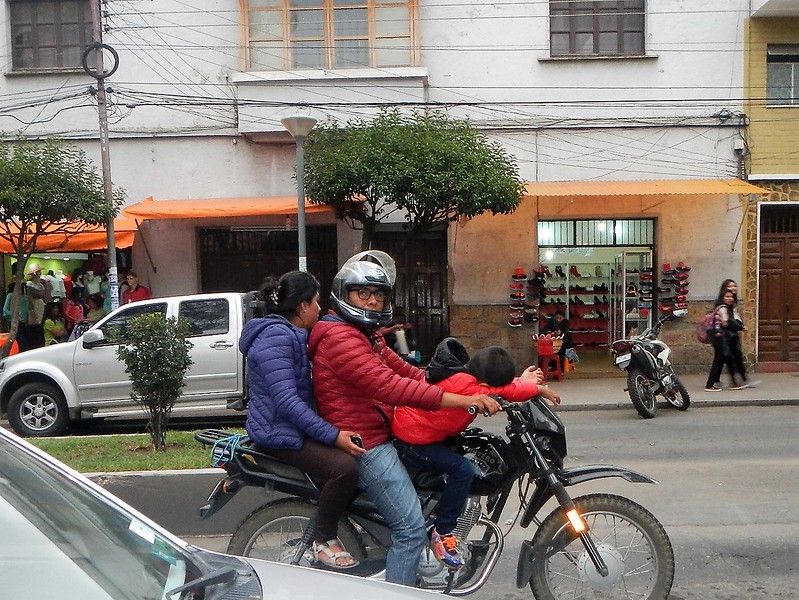 We saw everything on motorcycles, a well document fact of life in all south and central america. It’s common to see mother, father and child on a motorcycle so that no longer becomes unusual. The other day we came across such a trio but noticed the mother was nursing the baby… now you don’t see that every day.

On our way home from school this particular street was always full of buses. A bus lane of sorts I suppose.

We were definitely the oldest people… including the teachers. All of the students were in their 20’s and ALL of them were from Europe doing some sort of gap year or another. Here are some of our classmates during a break on the porch. 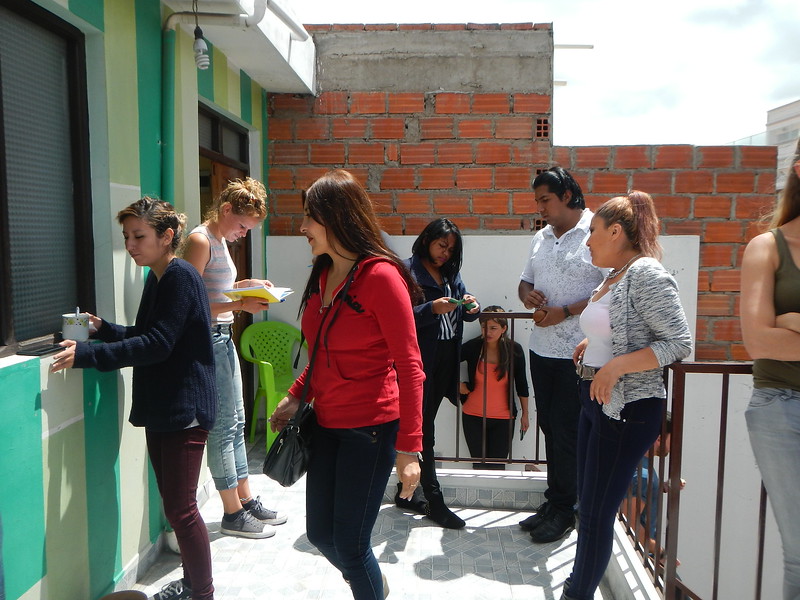 And here is our graduating class. I would list names but I don’t want to butcher the spelling. Our teacher Vinciente is in the middle with the red shirt.

It was a really fun and educational experience. Four hours a day for five days and then a few hours of homework after that. Thankfully Vincente spoke good English, it really helped with us beginners. By the end of the class he spoke less and less in English and mostly in Spanish. It is amazing how much this class helped working out problems we’ve been having. We still struggle with the language but every day get’s better.

Finally, just now, on our last night some thick clouds suddenly formed and before we know it we were on our third floor suite in the middle of a huge thunder and lightning storm. I don’t know if it was because we were at nearly 10,000 feet but the storm seemed really close rattling the windows and building. Suddenly we heard hail. Lots of hail. Our room has two big double doors that we just usually leave open but with the wind and rain it was starting to flood the room so we had to close them and put a towel under the door to keep the water out. When the hail started I had the great idea to walk about 6 feet down the patio to an area with big windows where we could watch the impressive hail storm. We put on rain coats and ran out the door for the shelter of the stairway a few feet away. We were slipping and sliding on the hail it was so thick on the tile floor. Once sequestered safely behind the glass doors we realized we left the key in the room. Really? Yes. The windows that we usually left open were closed and latched because the wind was blowing them around. Oh great, what to do? Run down three flights of outside stairs in the hail to the office to get an extra key. Good thing we had the camera.

Here is the hail in the inner courtyard we had to traverse, Deby in flipflops that she just ended taking off because it was too slippery. 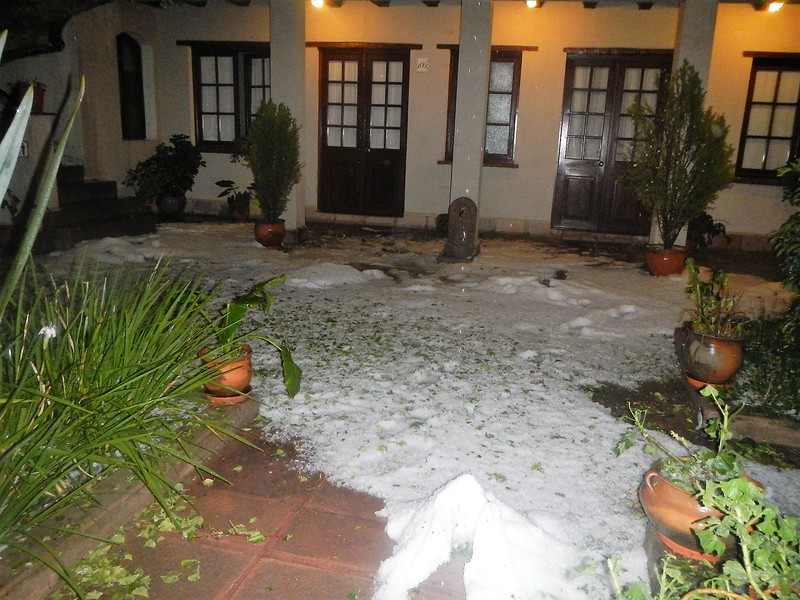 We ducked into the restaurant and watched the deluge.

The staff doing their best to keep the water under control. 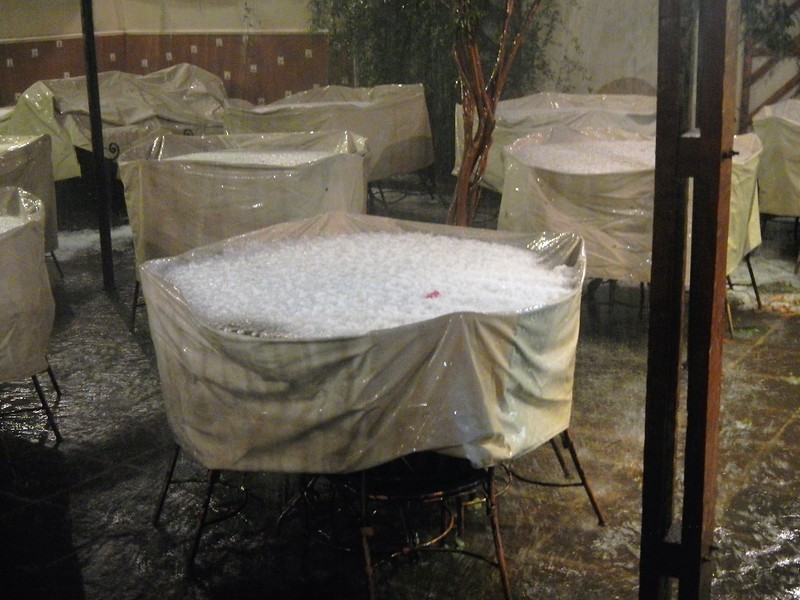 Wow, what a night. After an hour it was all over and we found our way back to our rooms where I’m completing this blog post. Never a dull moment, so it seems.

OK, Tomorrow it’s off to one of the craziest places in the world and probably the biggest tourist attraction in all of Bolivia, the Salar del Uyuni.

The world’s largest salt flat sits at a lofty 3653m (11,985ft) and blankets an amazing 12,000 sq km (4633 sq mi). It was part of a prehistoric salt lake, Lago Minchín, which once covered most of southwest Bolivia. When it dried up, it left a couple of seasonal puddles and several salt pans, including the Salar de Uyuni. The savage beauty of this vast salt desert makes it one of South America’s most awe-inspiring spectacles.

From strange islands in a sea of blindingly bright salt to delicately colored mineral lakes in the Andean mountains, this is an unforgettable Bolivian landscape.

We booked a three day 4WD tour of the salt flats. I’ve heard too many stories of motorcycles being ruined riding across the “dry” lake bed. Since this is the rainy season most people expect the salar to be wet, not conducive to safe motorcycle travel…

More to come. Thanks for following. Donn and Deby