See, it helps if I put the day, date and city I’m in when I write these posts to help me keep track of the days…. crazy. I didn’t mention that Dave’s wife Janice and her friend Faye flew down to Guatemala and have been hanging around with us for the past few days. They are two amazing women who have traveled the world and spent extended periods of their lives in other countries. I think Deby was glad for some women to hang out with.

We arrived in Panajachel (or Pana for short) Thursday evening early enough for a walk through town and dinner. Faye and Janice had been here before and recommended we take the boat across the lake in the morning to Santiago, a Mayan town on the south side of the Lago. Faye called a woman she know who worked as a guide and arranged a private guided tour of the city.

Boat ride across the lake, volcanos in the background 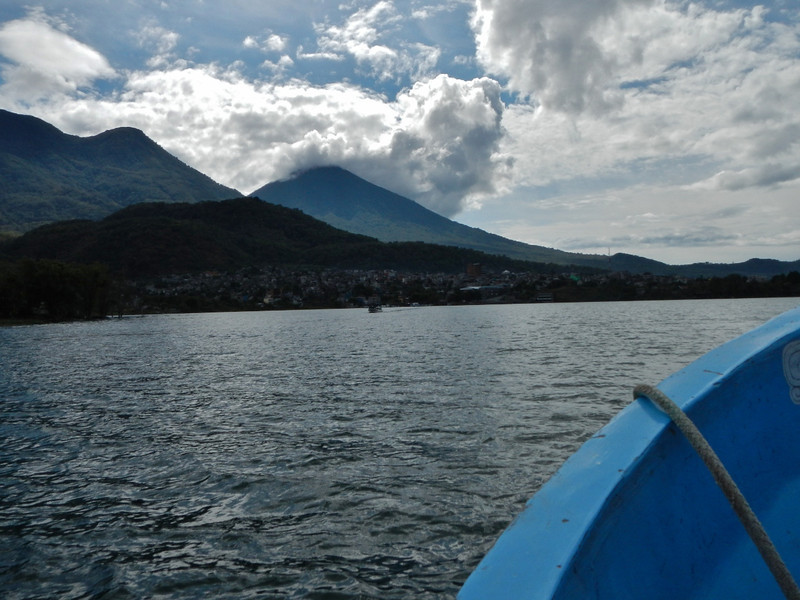 We were greeted by a woman demonstrating a Mayan headpiece wrapping technique that is steeped in tradition which was explained by our guide. 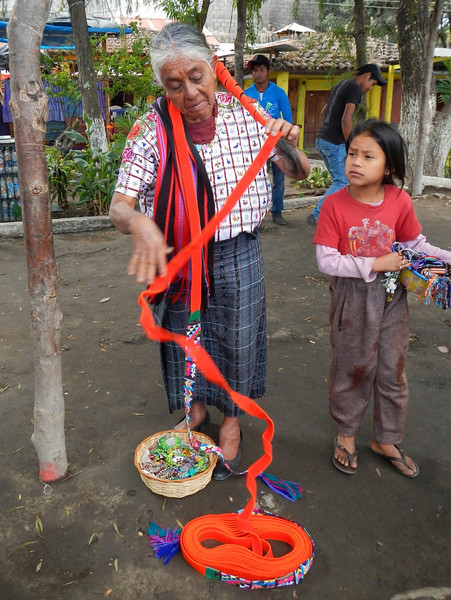 Just wrap around the head 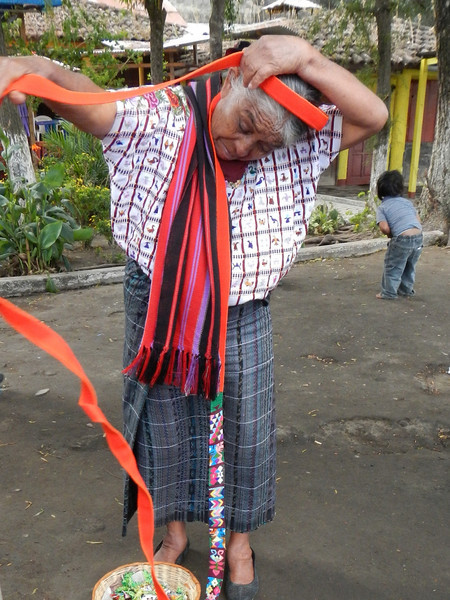 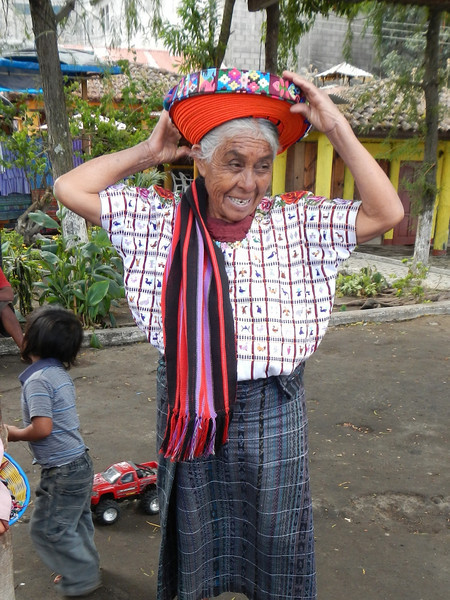 Deby and Faye walking with our guide, Delores, into Santiago, most of the roads in the city were better than this.

Vendors along the way

Guess what? It was market day! This one was pretty wild, you could absolutely buy anything there.

I had to take a picture of the power lines…. safety third! 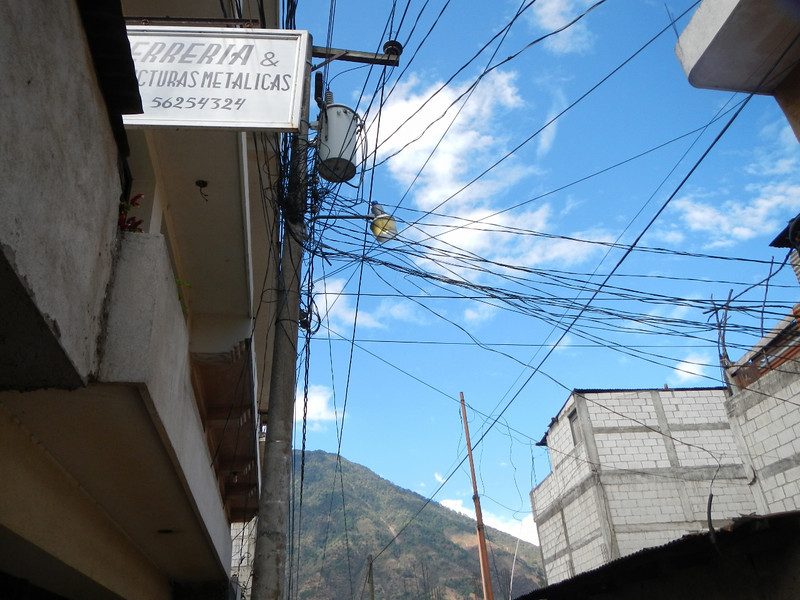 The next stop was to visit the local shaman idol Mashimo in his shrine, Delores filled us in on the story of the Mayan religion, their deities and traditions as we walked the steep and narrow roadways.

The path to the shrine 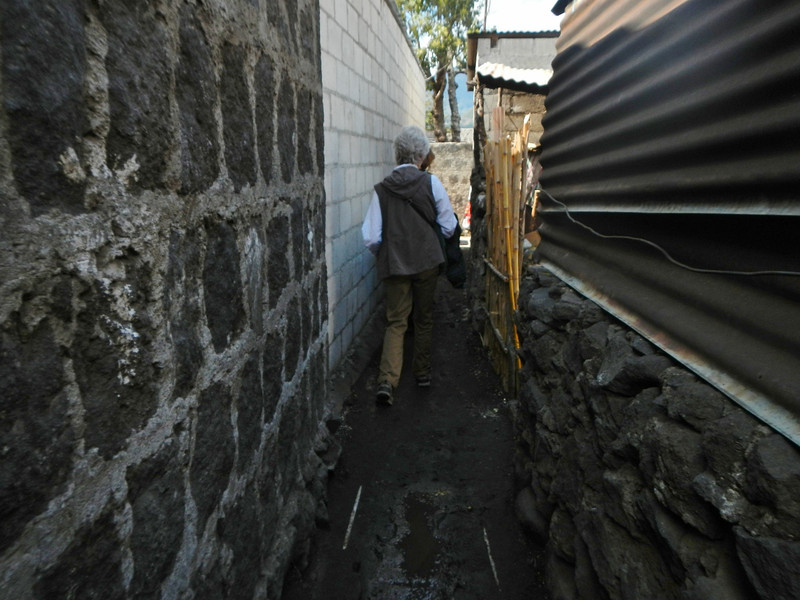 I didn’t take any pictures at the shrine because there was a charge. Mashimo was a wooden mask under a cowboy hat with a big cigar sticking out of his mouth. He was covered in woven cloths and was sitting in a chair in a room smoky with burning incense. On each side was a man who where the local medicine men ready to cure any ailments that needed curing. Every item represented a tradition with a long explanation, it was very interesting but I wasn’t sure exactly what to make of the whole deal.

Next stop was a special ceremony in a small room filled with incense smoke. Our group of seven tall gringos ducked into the back door to observe a blessing that was going on. In the corner was an older man playing a Mayan folk song (with a long tradition) on a out of tune guitar. He played the same two chords over and over while singing a song that was more like a chant. In honor of the large group of guests they decided to to give us a blessing as well, who am I to argue? Turns out that later in the day we probably needed it. Part of the blessing was passing of the swinging incense thing to each of us, we were instructed to swing it under our armpits. Nice, given our lack of showers it certainly served two purposes. The second part of the ceremony involved drinking Coca Cola out of Styrofoam cups, the phrase “drinking the cool aide” came to mind  but it seemed safe enough. I managed one picture. 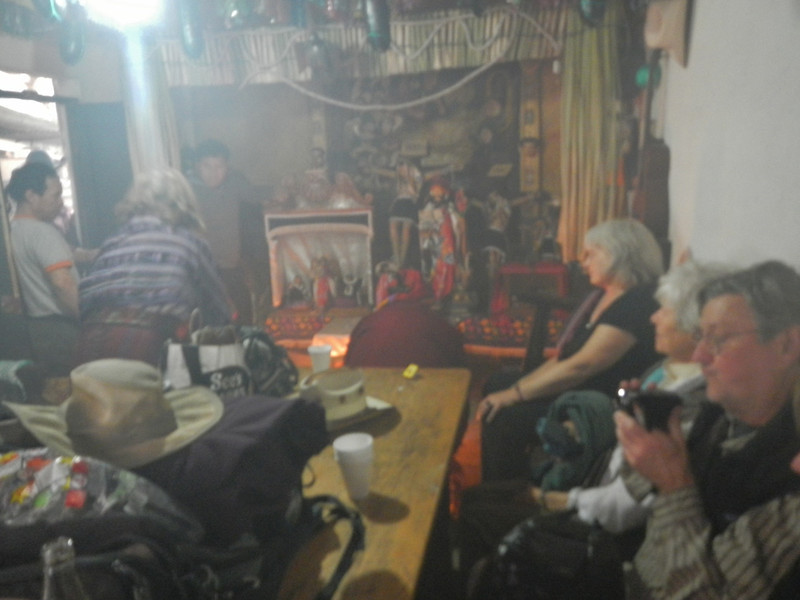 The next stop was one of the best parts of the trip, Delores took us to meet her mother who is a weaver.

Her “studio” was a mat on the floor of her house, which was mostly some tin over a couple of walls. 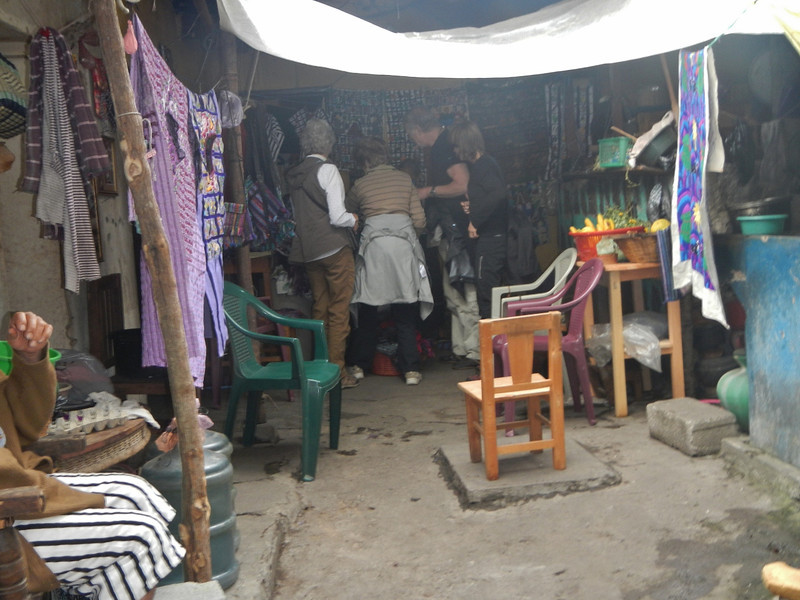 Here she is demonstrating her craft. This wasn’t a demo just for the tourists, she sits here everyday weaving, did I mention she’s 70 years old? 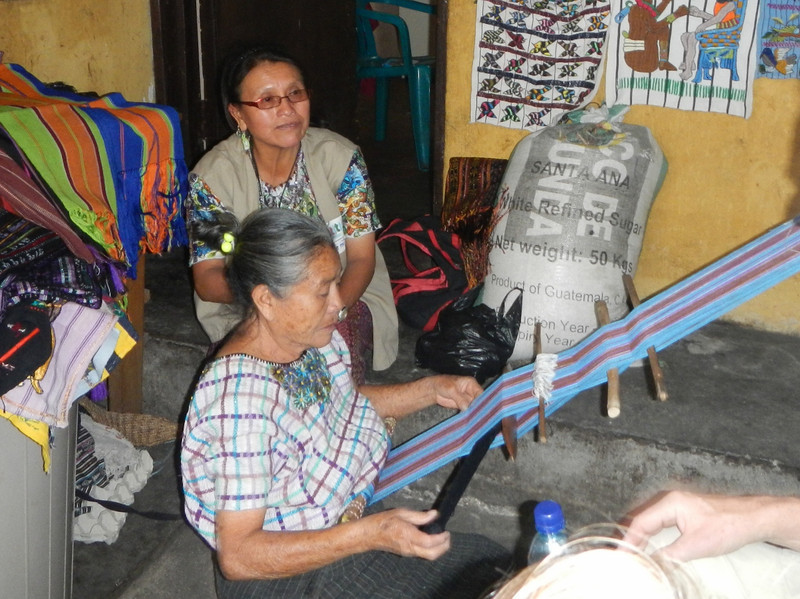 This is serious business, look how she sits, ouch.

We found out she has work in an art museum in Belgium after being discovered by a curator who was visiting Guatemala. Deby bought one of her beautiful pieces for the asking price which was a screaming bargain, about eight US dollars.

I took a few more pictures on the way back, these things are used as cabs and are everywhere. They drive like crazy! 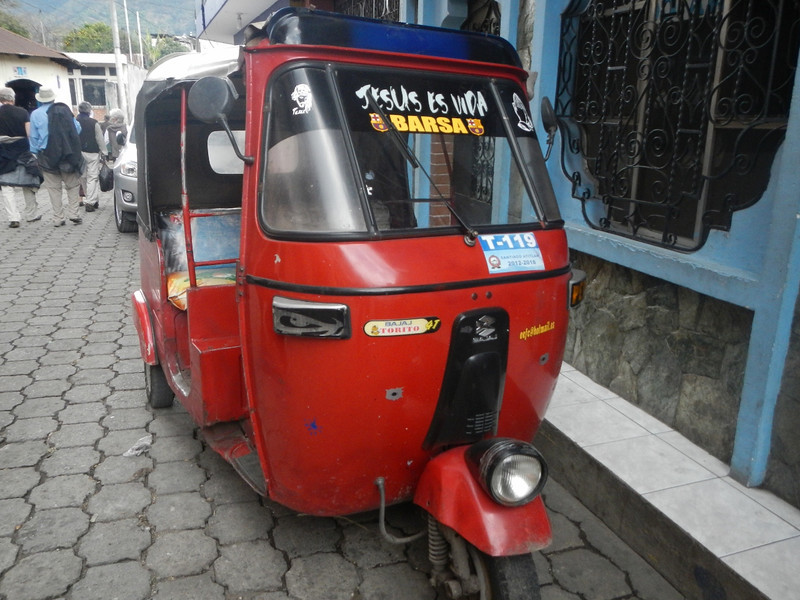 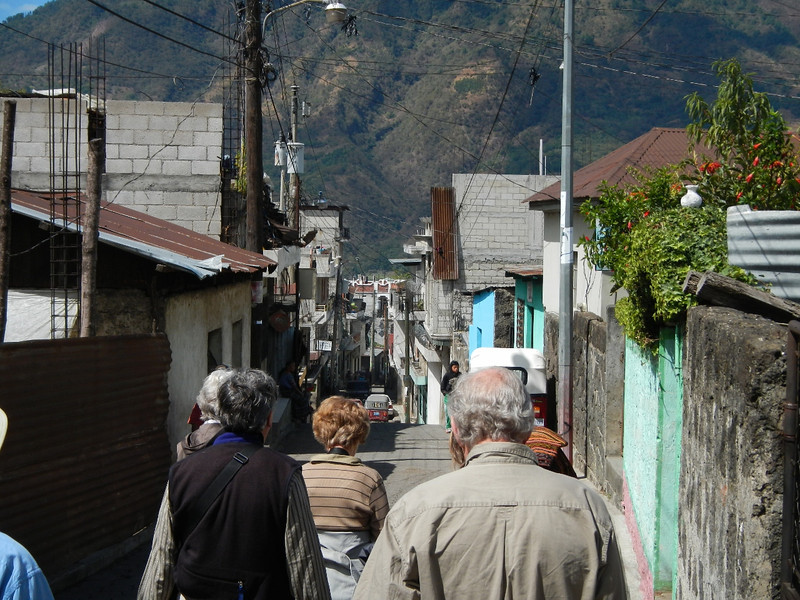 It started to rain pretty hard on the boat ride back across the lake, here is a picture of Jim demonstrating the proper wearing of foul weather gear. Did I mention he used to be a Commander in the Navy? 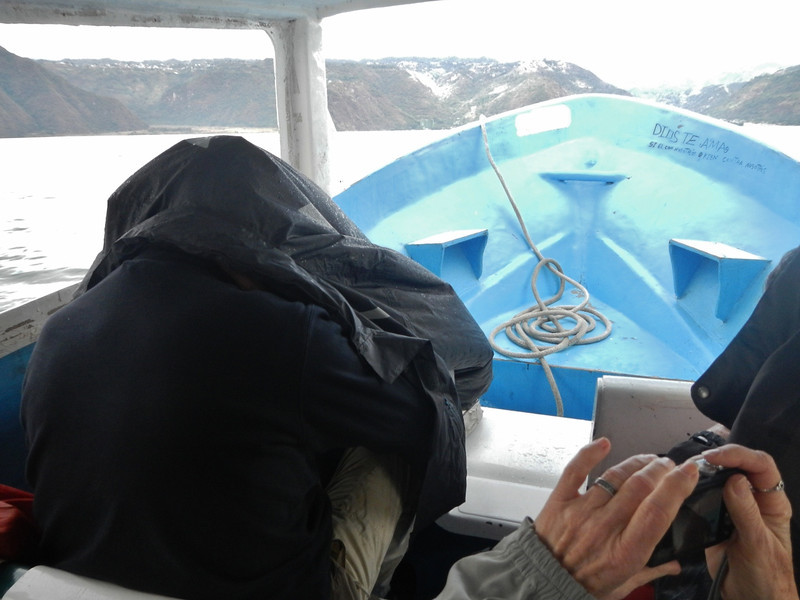 The weather cleared by the time we were ready to leave for the short 45 kilometer ride to Antigua. As usual traffic was crazy and the group was immediately split up when we exited the hotel driveway. Deby and I were in the rear trying to catch the other bikes when we totally lost sight of them on the winding road out of town. Somehow we thought they turned left at an intersection and turned around. About that time my GPS (now I know why they call it the Devil Box) said the route was behind us and since I thought that’s where the group went I followed the GPS. Bad move. We rode pretty far before it seemed clear we were going a different way than the other four bikes. I should have followed the rule and went back to the last place we were all together for a re-start. It turns out the rest of the gang did and was waiting for us. Somehow Deby and I decided to continue on our way since it was a short distance and I had an address in Antiqua. I learned later that they were on the NEW highway 1 and we were on the OLD highway 1 which explains why I kept seeing highway 1 signs and mileposts. The old highway was paved (barely) and in rough shape. I kept expecting the road to just end anytime. The worst part was when a bridge over a river was out and we had to detour and cross 2 foot deep water on the bikes. I wasn’t in the mood to take pictures and was worried that I should have went back and everyone was going to be really pissed. In the end it all worked out and we met about 7:00 pm in time for dinner. Yes, they were slightly upset but in a nice way (thanks guys, I deserved it).

Today was spent hanging around Antigua, here are a few more pictures

One of the local churches

Deby thought I needed a picture of the fountain

I saw a professional photographer taking a picture of this cart so when he was done I stood where he was and took this picture.

This old church from the 1500s was damaged in an earthquake and is now just in ruins. It shares a wall with the B&B we stayed in www.casamarie.com. It is run by Marie DeLattre, an amazing French woman with stories that kept going all night. Of course, it was market day in front of the church. 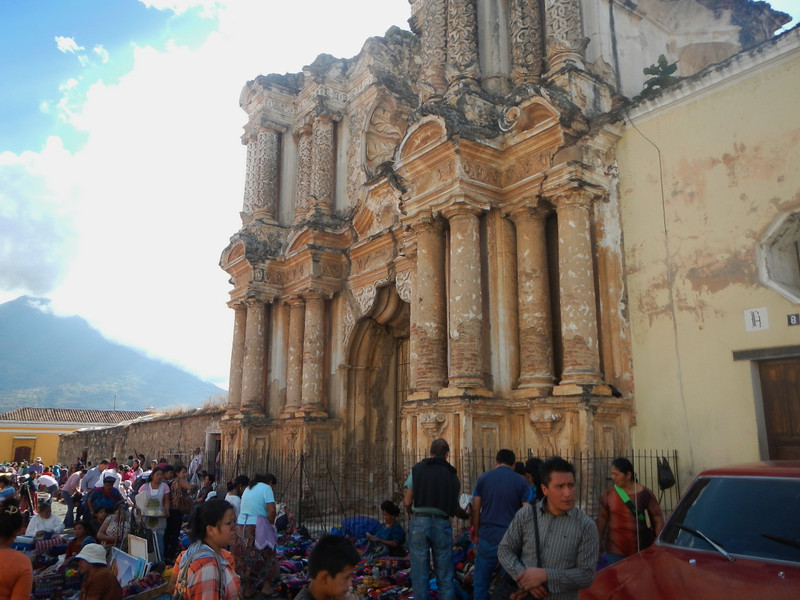 Tomorrow we are heading to Choban where Janice has arranged a stay at a farm where there is a Mercy Corp project going on.

Hey – I have my new SPOT tracker and I should have it on tomorrow. I think the same link will work. SPOTWALLA LINK

3 thoughts on “Lake Atitlan and Santiago”