Thursday morning we decided to split up, Keith and Jim wanted to ride to Cali for a stay in the city and do a zipline tour over the jungle canopy. Deby and I decided to go with Dave and Michael to a Turismo Rural stay at Villa Martha, a coffee farm run by Rafael, a retired civil engineer and his wife Martha. Villa Martha was a stop highly recommended by Gustavo at the BMW dealer in Bogota and he helped us make a reservation. Gustavo said the road (ruta 40) was a pretty twisty road through the mountains and the locals call it “the line”. We weren’t sure what that meant, but we would find out.

First of all, the mountains, the Andes, in Colombia are amazing. Green and lush with steep slopes and deep crevasses.

The “line” is a super twisty two lane road that is the main east to west route through the mountains. Consequently, every truck traversing this part of the Andes was on the road lugging up the steep inclines and hairpin turns. Each truck, and there were hundreds of them, had a “line” of cars behind it trying to pass. I’m assuming that’s why they call it the line.  Mix in some totally insane bus drivers and scooters everywhere passing on the shoulders and it was general mayhem. With our big bikes we generally, but not always, avoided passing on the shoulder but became very daring about passing on double yellow lines in tight turns. It sounds crazy, and it was, but I’m pretty sure we would still be there if we didn’t aggressively pass. Most of the time we could catch a spot where nobody was coming the other way but from time to time someone would be stuck passing and a truck would be coming the other way and we would just squeeze in the middle. Deby started calling it “having a threesome”.

I pulled over at a curve and took this picture. Notice the guy riding on the back of the jeep? Perfectly normal.

Or you could always hitch a ride on the back of a truck.

I didn’t take more pictures because I needed all  my concentration to not get killed on this crazy road. There were dozens and dozens of hairpin turns that the trucks could only make by going wide into the oncoming lanes. On each of these turns there were entrepreneurs waving flags directing the trucks when it was clear and warning oncoming traffic that a truck was coming. When a truck made it through they would hold out their hats for a tip. On some corners it looked like whole families were directing traffic with hand signals telling of oncoming traffic. More than once I was glad for their help and would have given them a tip if I could get my gloves off and into my pocket without stopping. They found a way to make order out of chaos and make a few bucks doing it.

Finally, we exited “the line” and stopped for lunch before taking the side road to Martha’s.

The back road to Martha’s wasn’t as crowded but wasn’t as smooth either.

We started to get a little bit of rain but it wasn’t that hard.

As usual, the scenery was beautiful.

As we got close to the unpaved turnoff to Martha’s we passed the road three times trying to find it so we traversed this route a few times before finally nestling into our parking spot on the farm.

This was our cabin, really nice.

Complete with pool and hot tub. I didn’t know this adventure riding stuff would be so rough!

Our hosts, Rafael and Martha, prepared a delicious trout dinner. Probably the best meal we’ve had on the trip.

We were some pretty happy campers. 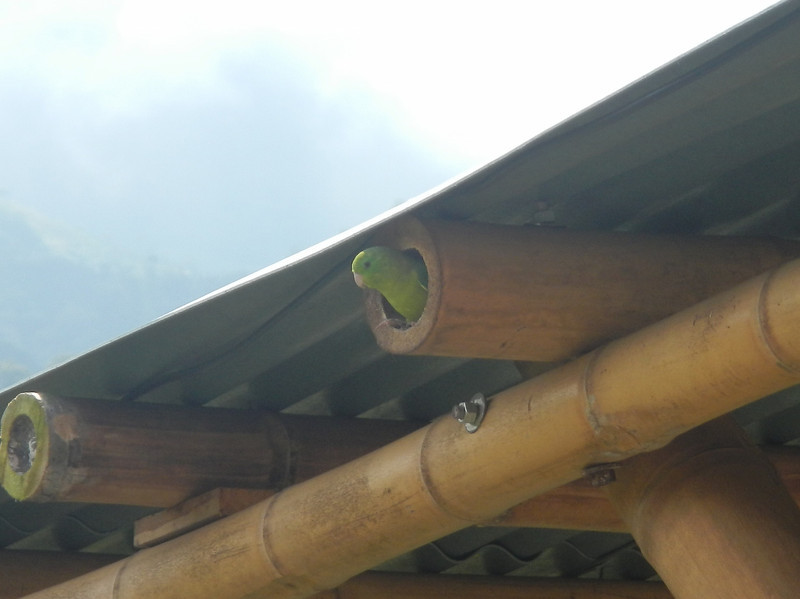 The next morning we met for breakfast prepared by our hosts.

Before heading out for a tour to lean about how coffee, the beverage of the gods, is made. Rafael took us through the process starting with picking the beans. It was important I strapped on the official basket and wore the official hat before starting to pick.

We all had a turn.

Back at the house, Rafael showed us the whole process of converting the raw beans into  what we see in the Starbucks bags.

To the final product.

Eventually, after becoming highly caffeinated, we loaded up and prepared to leave, but not before letting Martha have a sit on Michael’s bike.

We had an excellent day riding on 4 lane roads to our meeting spot south of Quito where we reconnected with the rest of our team for part two of our ride through Colombia.

6 thoughts on “Adventure Riding in Colombia”