Thursday we left Rio Hondo with the group back intact for our ride to the border of El Salvador. We knew that border crossings can be difficult and the El Salvador crossing was the worst one yet. We arrived at close to noon and didn’t get through the paperwork until after 3:00 in the afternoon. More on border crossings later.

Once across the border we cruised south through Santa Ana and continuing on to the ocean community of Acajutla in hopes of finding a beach front hotel. We arrived at the coast as the sun was setting and rode in a couple of circles looking for a decent hotel. It’s actually a comical routine that we’ve developed that involves a lot of stops, checking of GPS hotel locations, asking local opinions and making a spectacle of ourselves to the entertainment of the locals. Thursday night was no exception and we found ourselves riding in the dark to a recommended resort only to have the guard tell us it was full. Really??? We saw a sign to another resort hotel and back tracked to that place. When we arrived the heavily armed guard seem shocked to have guests and eventually led us to the reception office. It became clear we were about the only guests in this rather large complex and even though we arrived well after dark we were told to wait while our rooms were prepared. In the end it worked out and we found ourselves in nice little stand-alone buildings. We needed to get to the restaurant before they closed at 8:00 which surprised us with a pretty good meal.

View from the hotel resturant the next morning 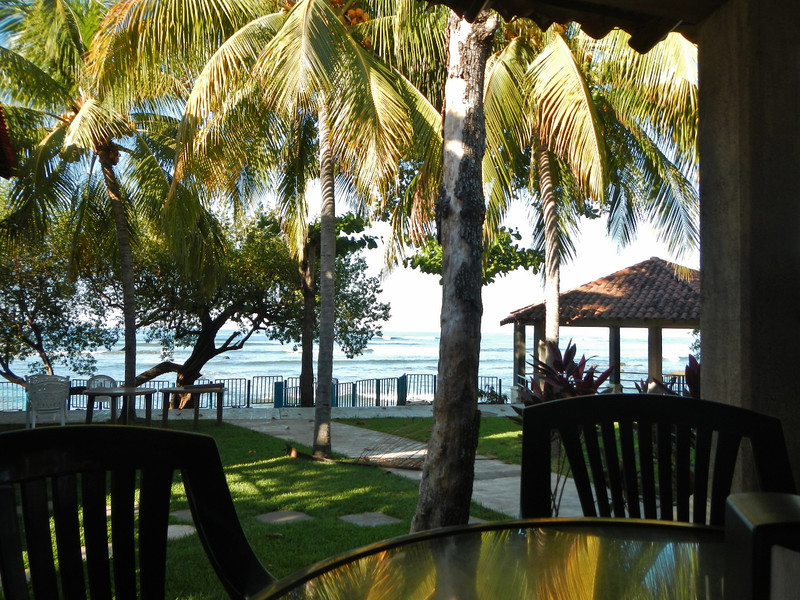 After a hard day riding on Thursday we decided to have a late start on Friday and a shorter ride to another beach hotel somewhere along the coast. We ended up near La Libertad about 55 miles from our start point and after our usual routine finding a hotel checked into a place on the beach by 1:00 PM. The temperatures had been nearing 100 degrees F for the last few days so it was nice to have most of the day to cool off in the pool or by the beach. Deby and I had a long walk along the shore and explored some cool (literally) caves. It was a great beach with excellent sand and a super warm surf. It was unusual that we walked for most of the afternoon and absolutely no one hassled us or tried to sell us anything which was a nice change of pace.

Sunset on the beach, plenty of locals enjoying the evening. 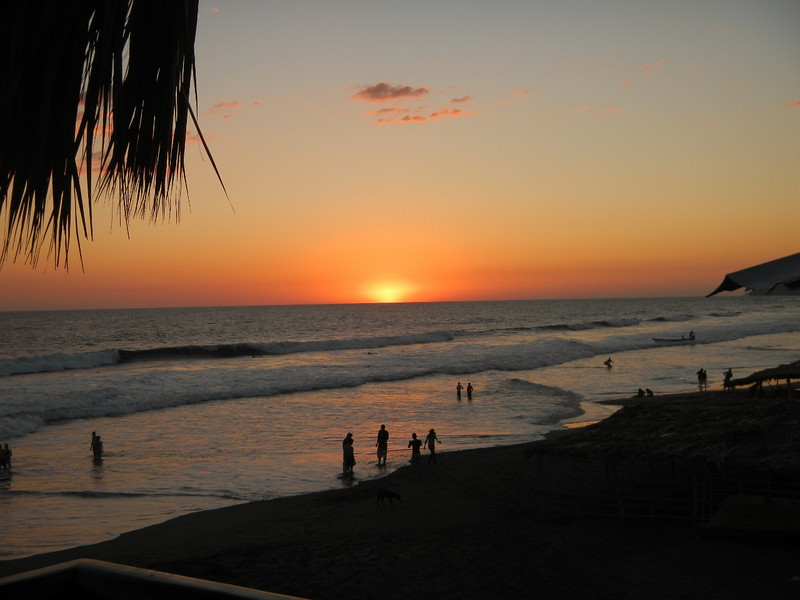 Room side dining service was available.

Armed guards protecting the bikes at no extra charge.

View from the rooftop restaurant.

At dinner we decided to get an early start the next day so Saturday morning we were on the road by 7:30 trying to beat the heat and get to the Honduras border at a reasonable hour. We ended up getting to the border crossing about noon and started the three and one half hour process to get six motorcycles exported from El Salvador and imported into Honduras.

On the way Deby added a MotoRaid sticker to a gas station window. 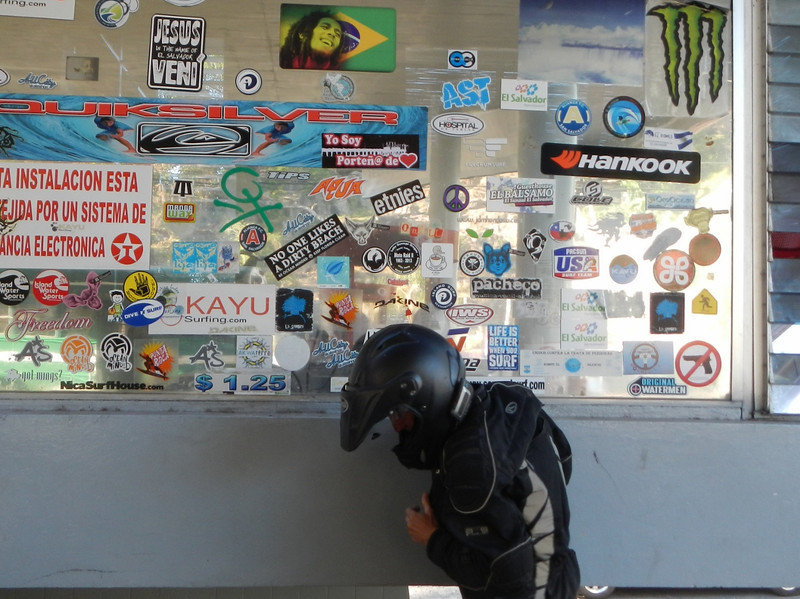 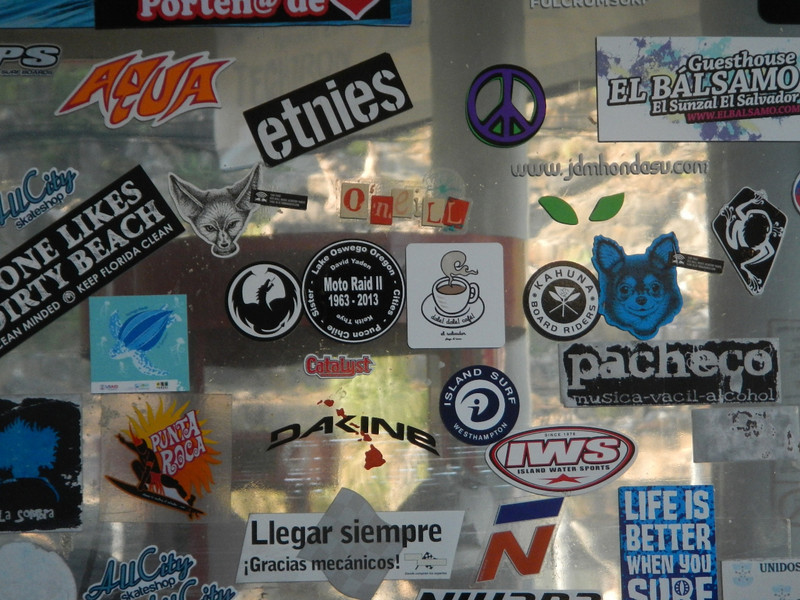 Just to give you an idea of what a border crossing is like I gathered the collective memory of the group at dinner and took notes of exactly what we went through today. Here it is:

We stopped at a gas station just outside the border to fill up the tanks which would give us enough gas to transverse Honduras without filling up. We were immediately solicited by at least a half dozen “fixers”, people who want to “help” us get across the border easier. We shook them off but on guy was so persistent he followed us through all the check points hoping we could use him.

We rode about 1km down the road and were waved down by someone that looked official. He told us we needed to get two copies of a form that was the entry paperwork for the bike into El Salavador. Deby volunteered to collect everyone’s form and went to a nearby shanty to make copies. Upon arrival the power promptly went out. While Deby was trying to figure out what to do the power came back and the woman helping her declared “its’ a miracle”.

Deby came back and distributed the copies and we each went one by one to another more official looking shack and gave the copies to someone who stamped them and kept one.

Keep in mind, all this is going on while we are guarding the bikes in shifts, fending off offers of “help” from fixers and money changers and guarding against pickpockets and other shady characters. Oh, we were in the sun and it was nearly 100 degrees.

After that paperwork was complete we gathered and moved the BMW parade to the next checkpoint. This was the exit immigration point where we needed to get exit stamps on our passports. Once again we parked in a row and one by one stood in line at the window in shifts while someone watched our bikes. I should have took more pictures but here is one from this line. 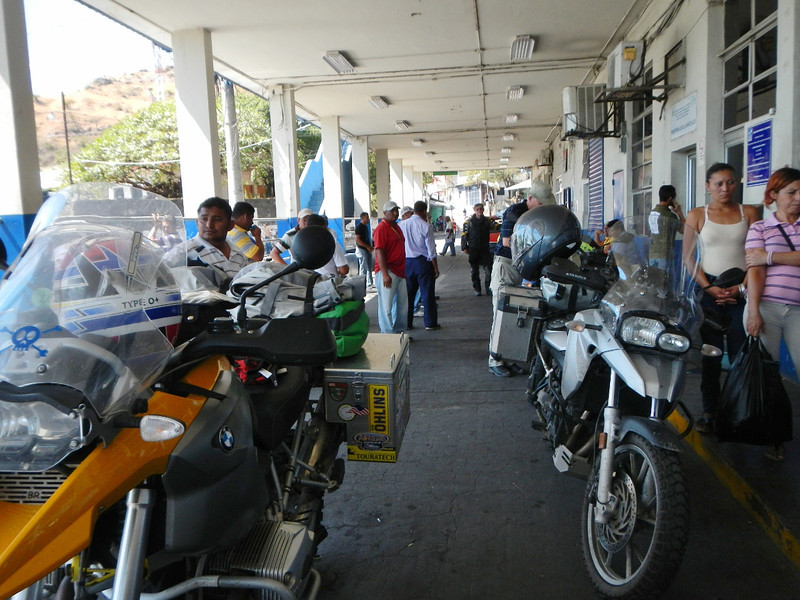 The line for the window is on the right and the people wandering around are the money changers and fixers.

Once we got our passports stamped they gave us the smallest piece of paper that literally was the size of a fortune in a fortune cookie. We had no idea what that was for but assumed it was important and that we shouldn’t loose it no matter what. I shoved it in my tank bag where the potential for loss was very real.

We always wait and travel to the next checkpoint in a group so after some time we all loaded up and the circus rode about 50 feet before we were stopped by someone looking official. He wanted the other of the two copies we had made previously, then someone else came over and wanted the fortune cookie piece of paper. I have no idea why but it worked and they waved us through.

I’m pretty sure this was the point where we were officially out of El Salvador having successfully exported both us and the bikes.

From there it was 4km to the next check point, I know this because numerous “helpers” or “fixers” were giving us detailed instructions hoping for a tip.

We made the very short ride with no helmets or jackets trying to stay cool in the oppressive heat . We parked at the Honduras immigration where we directed by the fixer we met at the gas station, he had followed us this whole way working for his tip. This guy spoke reasonable English and led us to an air conditioned office, that I’ll call the White Room, to speak with an official looking person. That is when we found out he didn’t really know what he was doing since we were supposed to go the another window first to get our passports stamped and fill out an immigration form. One good bit of advice he had was to bring a pen which we did. One by one we walked a few building down and stood in line to get the immigration forms and then sat on the ground filling them out while fixers hoovered around offering help and little kids offered us their pens (for a fee). Once that form was completed we stood in line again to turn in a copy and get our passports stamped.

Somewhere along the way we found out before we could go back to the White Room we would each need two copies of the following: Passports, Vehicle Registration, Vehicle Title, Drivers License, the vehicle exit form from El Salavador. Conveniently, there was a small shack between the official buildings that sold cell phones and made copies. One by one, we took turns guarding the bikes and waiting go get copies made.

Finally, with all our paper work we entered the White Room where a very pleasant woman helped us out. To make things easier (not faster), she wanted the paperwork for all six bikes together so we gathered the stacks of paper with our passports and handed them over for processing. The room was sort of air conditioned so we took shifts watching the bikes in the blazing sun alternating with monitoring the progress in the White Room. Pleasant lady pulled out the documents for one of the bikes and started reading, copying, typing, and finally after about 20 minutes started stamping all kinds of paper with all kinds of stamps. I thought stamping was a good sign and gave her a big grin. I was right after the final stamp she gathered the papers and put them in the corresponding passport and set it on the corner of her desk and seeing my big grin flashed me a gigantic smile and said “Ono”. My cheesy grin faded when I realized that it took 20 minutes to process just one bike.

Do the math… 20 times 6 is 120 minutes which is two hours, plus a thankfully short lunch break and we were there for over two hours while she typed, stamped and stacked papers. Each time she completed one she flashed her big smile and gave us a count.

Somewhere between numbers four and five I had to take her picture.

Finally, she started stamping number six and we could tell that we were almost free. After the last stack was complete she collected all the forms in nice piles to give back and then told Dave she needed MORE COPIES! We thought for sure she was joking and having fun with us but no, so off we went back to the copy shack, this time we needed two copies of our passport, 3 copies of the exit form from El Salvador and four copies of a new form that she had created. So off we went in shifts to the copy machine while the others guarded the bikes in the heat.

Finally with copies in hand we went back to the white room for the final time for more paper shuffling before she returned our passports and gave us some new official paperwork that certified we had permission to bring the bikes into Honduras. We did it, we were legal to enter the country and even better the process took so long that our fixers gave up on us and were all gone. We jumped on the bikes eager to make some progress before we stopped for the night and rode 150 feet before we were stopped by a guard who wanted to see our paperwork and take one of the copies pleasant woman gave us.

The whole process took almost 4 hours to enter a country that it takes 3 hours to ride through. So tomorrow we do the whole thing again when we exit Honduras and enter Nicaragua.

Are we having fun yet?