As you may recall we met Michael on the dirt road outside of Duck Canyon. He was turned around and saved us 4 hours riding time, he lost 8 hours riding time trying to get to Cusco before us. We spent the night in Chimbote and Michael left early the next morning to get ahead of us. The 5 of us went towards Lima and Michael took a route we thought we would take to Huancayo to take the original highway three to Cusco. Michael went to pre-run the route a day ahead of us. When we arrived in Lima to get tires from Ivan he strongly recommended we not take the Huancayo route, he said it was cold, snow, possibly ice and there was over 100 miles of dirt roads that turn into slick mud in the rain. Ummmm, too late for us to tell Michael, he was on his way.

On Tuesday the 5th Michael left the Lima area and headed into the mountains in decent weather but as he approached the 15,000 foot summit in Abra Anticona (4843 meters) it started raining and then it turned to snow over the summit and the flooding. 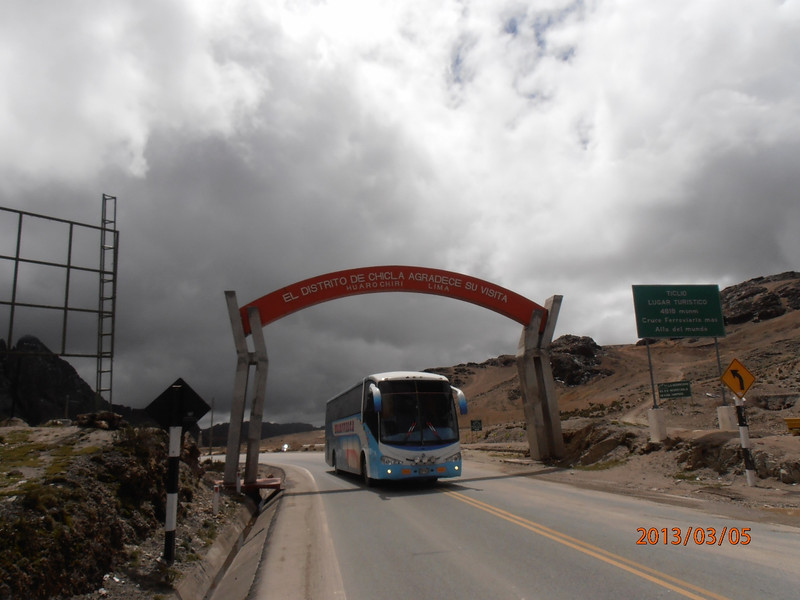 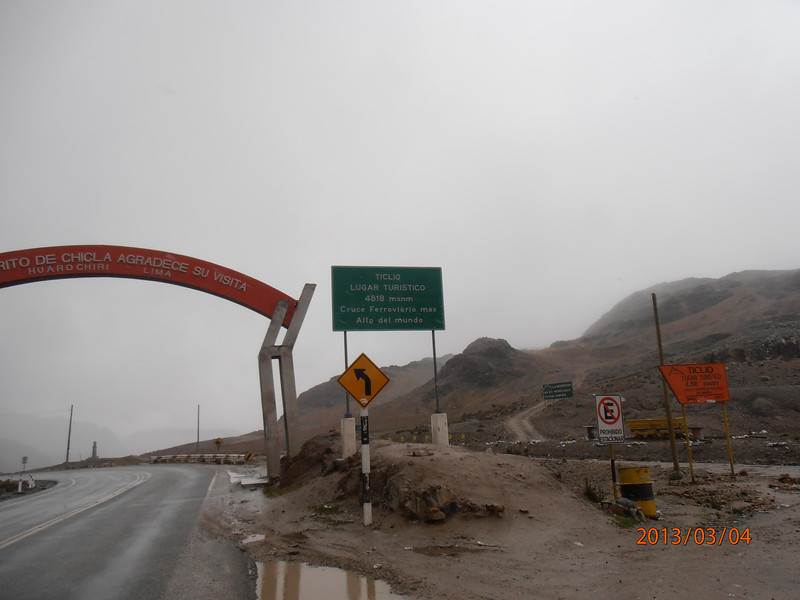 After the summit in the rain and snow, Michael continued into Huancayo in drenching rain, cold, and traffic. In Huancayo Michael stopped for the night and when checking his e-mail found a message from Keith about the road conditions ahead. It was Tuesday night and Michael decided he had to turn around to to make it to Cusco to meet Dee Dee. Now he had 1380 km to go including the backtrack to Lima.

Wednesday morning Michael was on the road by 8:00, the weather was better over the 15,000 summit. The flooding in the picture was worse the second time. He crossed the water which was halfway up his boots and a truck blasted in the other direction drenching him the rest of the way. A good way to start the day. Back down to Lima, just outside of Lima Michael stopped for soup. In the English / Spanish translation he ended up with pig jaw soup. It was a pig jaw in some mystery broth. The tongue is not shown. (Ethan, this picture is for you!) 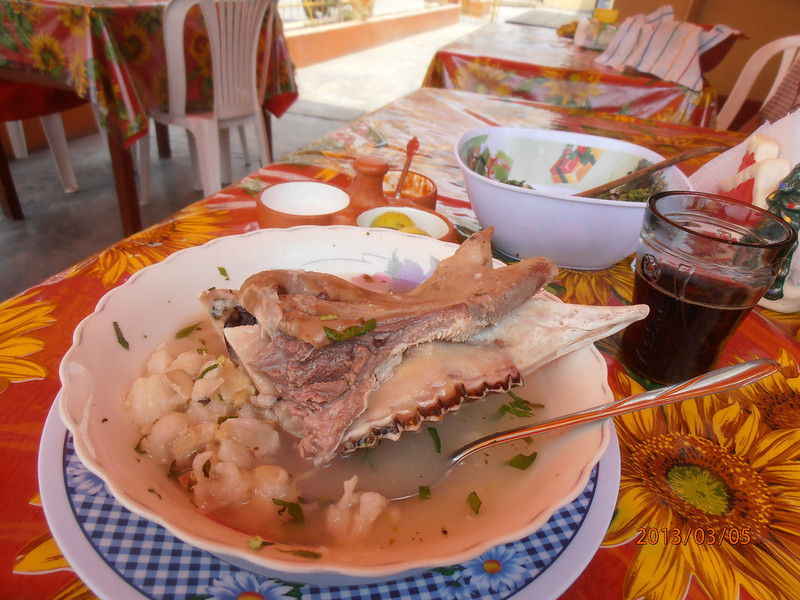 After a late afternoon fight with Lima traffic Michael found his way to the four lane Zona de Billboardos and flew south trying to get all the way to Pisco. Late in the afternoon he had a flat along the road. 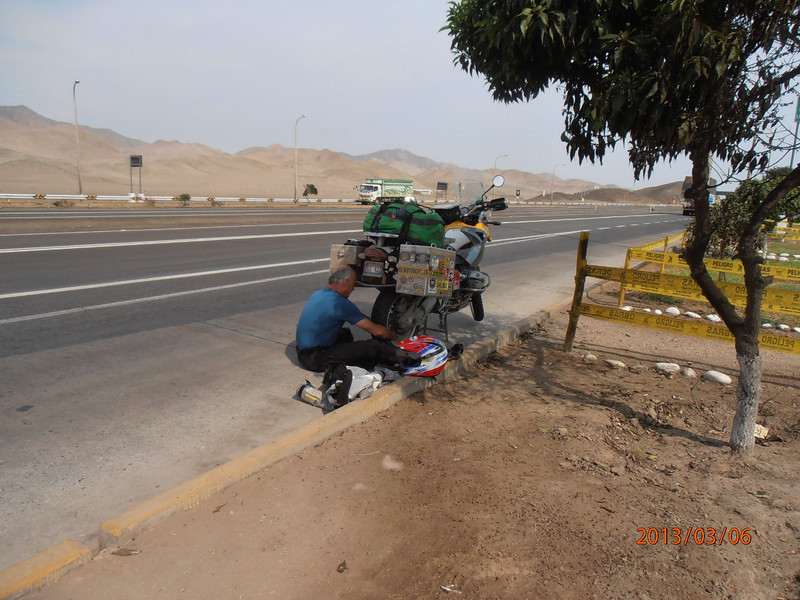 Michael didn’t have an air pump but managed to get a plug in the hole and filled up the tire  to about 15psi with a couple of CO2 cartridges. He managed to get to Pisco for the night. Total mileage for the day was 325 miles including the flat.

Thursday, with one day and 540 miles to go he left with the goal of 300 miles through the hot desert into Nazca. Somewhere near Nazca Michael’s wallet with his charge cards, drivers license and some cash disappeared. Left at a gas station? Stolen? Left on the seat at a stop to fly away along the road? We still don’t know. Michael didn’t even know it was missing and rode on into the 14,000 foot Andes.

Remember in my report we stopped Puguio because it looked like the last stop and the clouds were forming? Michael rode through there at 4:00 and saw the same dark clouds but didn’t have his 300 miles in so he kept going. Big mistake. Sure enough when he hit the 13,000 plus level the rain started and turned into snow. It was getting dark, cold, snow and with fogged visor couldn’t see a thing but kept going. Finally he arrived at Negro Mayo a small town consisting of about six huts. The snow, cold and dark meant the end of the ride for the day. He went and knocked at a hut and communicated in his limited Spanish that he was near frozen and needed a place to stay for the night. After some negotiation he ended up in a shed along a house. Home for the night, freezing cold, no heat.

Here is the room.

It was during the night that Michael realized his wallet was gone and he didn’t have any money to pay for his stay at the beautiful hotel.

Friday morning, cold, damp, broke and with almost no gas in his tank and a leaking rear tire that was pretty low Michael got up early after not really sleeping and jumped on the bike and left feeling bad for running out without paying. Good thing Michael had a spare charge card stashed away, all he needed to do was 1) find a gas station and 2) find one that accepted charge cards……

Eventually after draining his spare gas can and with the bike computer saying he was out of gas he found a station that accepted cards and even had an air pump for his tire. He was ready to go!

From there with 15 sole’s which is about 6 dollars he had enough money for a bite to eat and some money left over to pay a cab in Cusco to find the hotel. Determined to arrive the same day as Dee Dee he blasted through the twisty mountain road the final 265 miles to the hotel where Dee Dee was waiting!

There, the tale is told, Michael’s three days in hell.

8 thoughts on “All About Michael – Three Days in Hell”