Did I mention that premium gas in Ecuador was $2.00 USD per gallon? Regular was around $1.50, when was the last time you saw that? The currency is the US dollar so we were in familiar territory with the money. We have to go back. Ecuador seemed clean without trash scattered all over the roads, was beautiful, the people were exceedingly friendly and cheap gas! We stopped at two gas stations to fill be bikes with cheap gas before the border and they were both closed down, hmmm, wonder why.

The first order of business was to traverse the border. Again, it seemed to take longer than it should of but we were getting used to it. It took about 3 hours to process the 5 motorcycles, I suppose that is roughly about on half hour per bike which wouldn’t be bad but we have to wait for the whole group to get processed. It was about 95 degrees and we were standing in the direct sun waiting our turn with the Aduana man. One person at a time was allowed in the air conditioned room where we were processed. I was too hot to take any pictures.

It was a different experience at this crossing, there were no “fixers”, money changers or other pests to swarm around us, it was all business. The aduana office was actually a converted shipping container. We had gotten used to utilizing the money changers to get local currency and without those we entered Peru with no money. It wasn’t long before we came to a toll booth, great, no cash. I slowed down to put David in the front to negotiate our dilemma since he speaks reasonable Spanish. We arrived at the booth to find it vacant, whew! As it turns out all the toll booths we’ve come to so far were closed. I’m not sure why but I’m glad.

Northern Peru is night and day different from Ecuador. Without seeing prices we knew gas was much more expensive because of the amount of motorcycles everywhere. Trash and garbage dumps lined the roads and horse/donkey drawn carts re-appeared. We dropped into the planes of the Peruvian desert and it got hot, flat and sticky. In each town we tried to locate a bank with an ATM with no luck. Most of the towns didn’t seem very inviting and we immediately drew crowds whenever we stopped.

Finally it was getting late in the day and we came to the farming town of Sullana. Click on the link for the Wikipedia entry for the city, not much to talk about. With no cash and low on fuel we stopped and three different stations to see if they accepted charge cards, the answer each time was no. The funny thing is each station told us the next station accepted charge cards which of course they didn’t.

Giving up on gas, and being that it was late in the day we then started asking about hotels. Yes, there is a good on across the street. Ahem….

Here is a picture of the hotel, looks nice right?

We turned our heads and saw this. 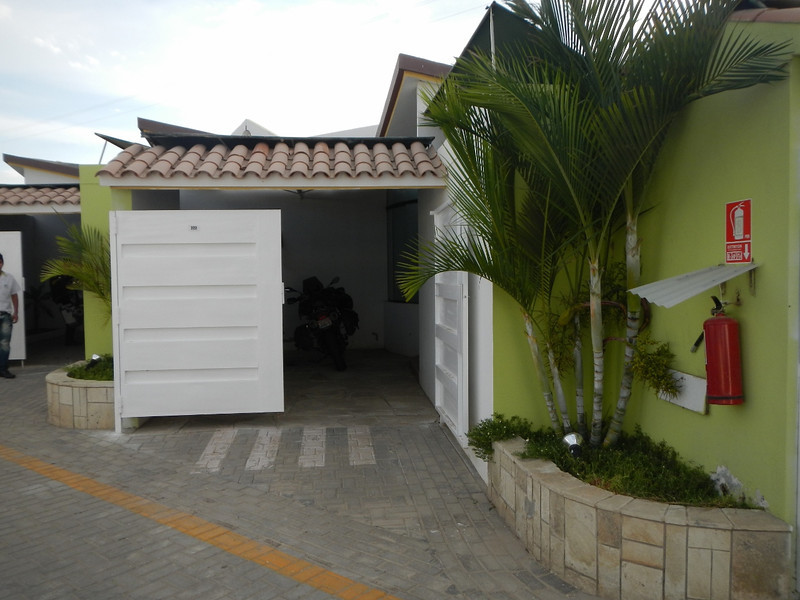 We all knew immediately what was going on and started laughing. It had to happen eventually, we were tired, hungry, hot, broke and it was getting dark. What better time to check into an Auto Hotel.

What is an Auto Hotel you may ask???? Look at the pictures again and I’ll attempt to explain. An automobile pulls into a large walled compound and is greeted by an armed guard. The guard tells the driver which “garage” to pull into and the door is shut behind him for total privacy. Nobody can see the driver or car and it’s hidden from view for the duration of the stay. The garage connects directly to the room entrance. The rooms are typically rented by the hour and evidently (here’s where I have no direct experience) accompaniment can be arranged.

Now, having explained all that, it’s well known in the Adventure Motorcycle community that Auto Hotels are some of the best places to stay because they are usually very clean, have secure parking and are pretty inexpensive. In our case that was all true and there was even hot water in the shower. I’m guessing the hotel we were at had around 30 rooms and it was hard to gauge how full they were but there seemed to be a relatively steady stream of traffic. We paid for a complete nights lodging and jumped on our bikes for a trip into downtown Sullana looking for a bank.

We maneuvered in the chaotic rush hour traffic (isn’t it always rush hour?) and somehow I found a main street with banks on either side. I was about to pull over when a motorcycle cop was behind me with his lights on waving me over. Yikes.

Somehow I neglected to notice that I was on a street that was off limits to motorcycles. Really? In my pathetic Spanish I managed a lo siento and told him we needed some dinero. About that time the rest of the group pulled up compounding our lawlessness and parked. The cop gave up and ended up having a good laugh about our haphazard group and let us park for a while.

Flush with Peruvian Sol’s we found a restaurant near the town square and had an excellent night enjoying the activities in the town center. It’s so hot that during the day that it seemed like whole town came out in the cool evening to enjoy the town square activities. Well after dark we found our way back to the Auto Hotel on the edge of town and turned in for a good night’s sleep.

Thursday the 28th, into the desert.

I took a few pictures.

It was pretty impressive in it’s own way, what a change from Ecuador! 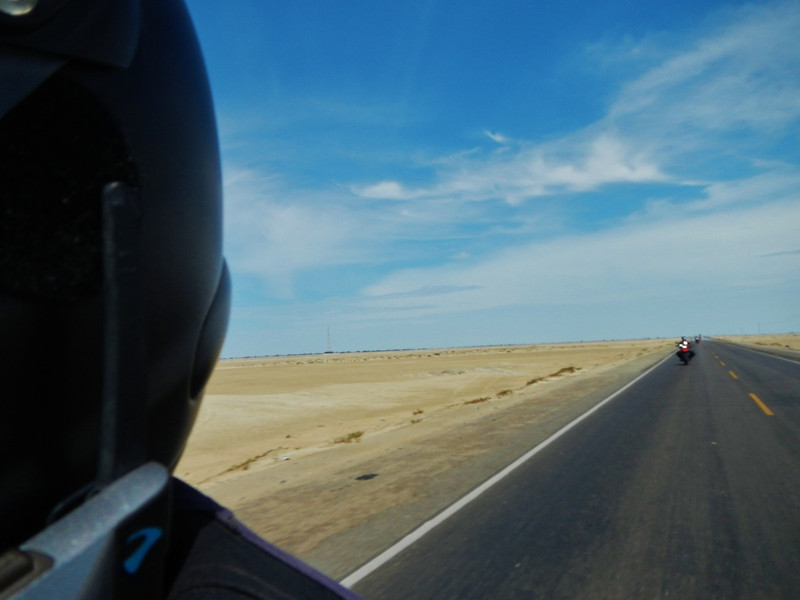 Eventually we found ourselves in Pimentel Peru. We picked Pimentel because it’s on the beach and we thought we would find a nice hotel.

Here it is, Pimentel’s finest, up the dirt road to the right.

The cost was about $35 USD so I suppose we got what we paid for. It was pretty basic but seemed clean and even had hot water! Deby and I splurged for a “vista” room on the corner. That is our room on the corner just under the wire.

Hey, not every place we stay is a luxury hotel.

We were there early enough for a walk on the beach which was really fun. The whole beach was surrounded by fog which seemed odd until we put our feet in the water, burrrrr, it was freezing cold. I wouldn’t have expected that! We learned there is a cold current from the antarctic that runs up the northern coast of Peru and keeps the water cold all year round. The cool water clashes with the hot air inland and forms a constant cloud of cool fog along the beach. The water and cool air attracts masses of people from the nearby city to escape the heat. Walking the beach it was clear this was a local’s beach and everyone was down for the day. Must be, there was only one hotel to the best of our knowledge and it didn’t seem very full.

We got our first look at these Peruvian boats, they were everywhere. 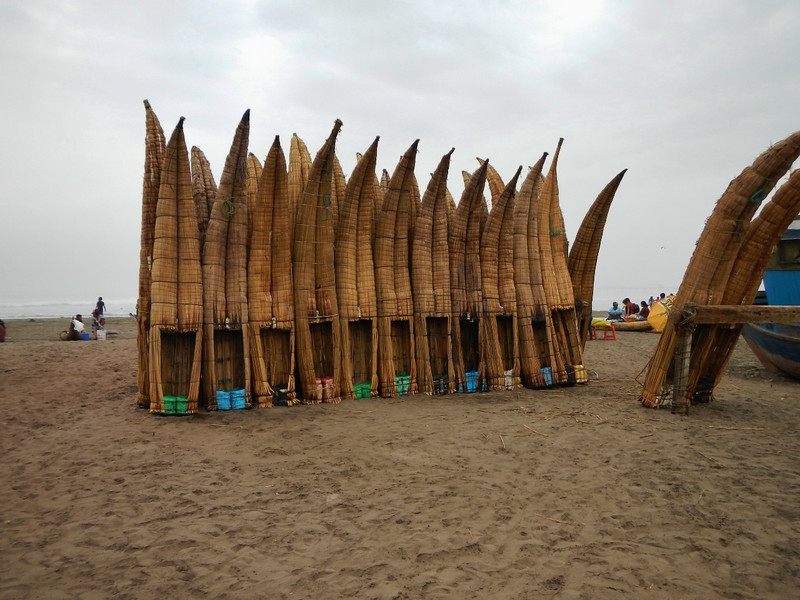 Here are a few more pictures from the beach. 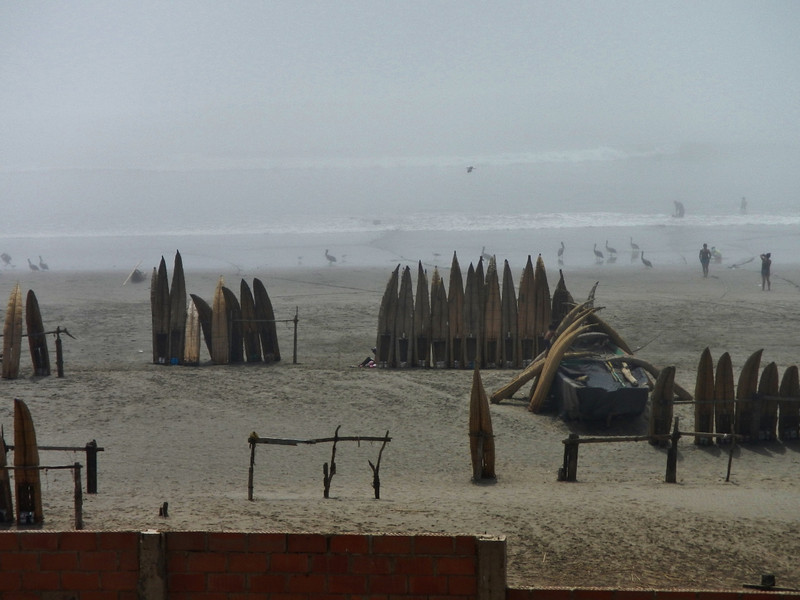 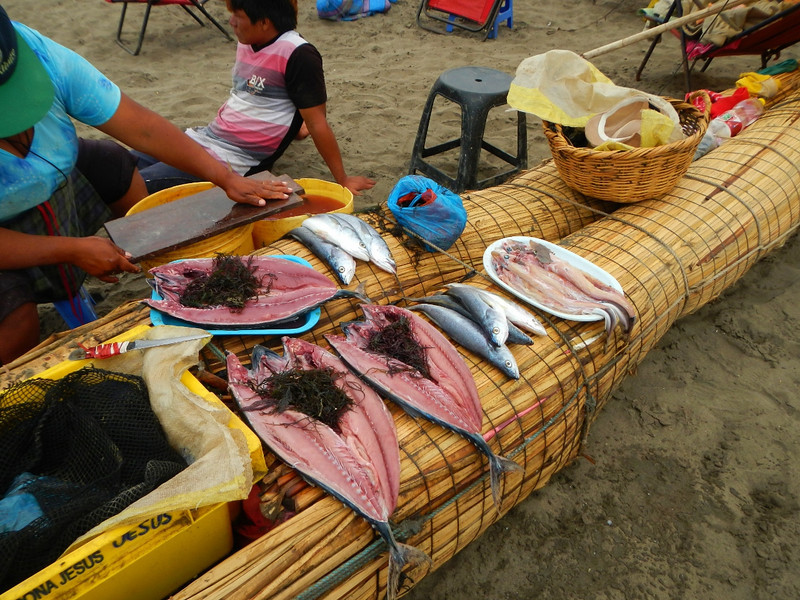 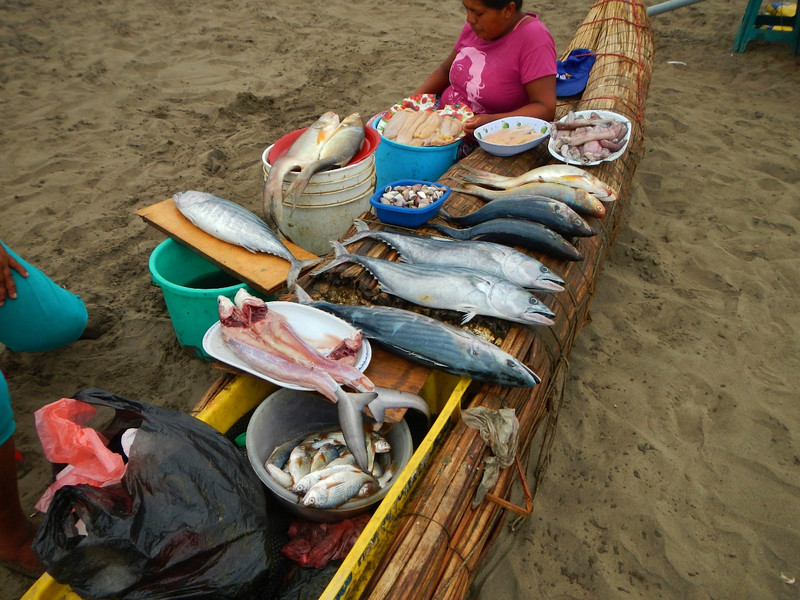 A very popular spot for sure.

After dinner and some time in the lobby of the hotel posting my last ride report I took one last picture and fell asleep with hopes that my sweat soaked socks would be dry in the morning.

I started a SmugMug gallery for my Peru Pictures, the link is HERE. Click it to see the latest pictures.

You can follow us real time on SpotWalla HERE.

I’ll try to get another post in later tonight or maybe tomorrow. Thanks for following and we love the comments even if I don’t get back to everyone.