The driver arrived Saturday morning at 10:00 to take us on a day long tour of the Huaca del Sol temple and then to the ruins of Chan Chan, both of which were pre-Inca civilizations in Peru.  I took a bunch of pictures which are on my SmugMug Peru page. It was an amazing day.

Here is one of the temples at the Hauca del Sol site that has yet to be excavated because of lack of funds. 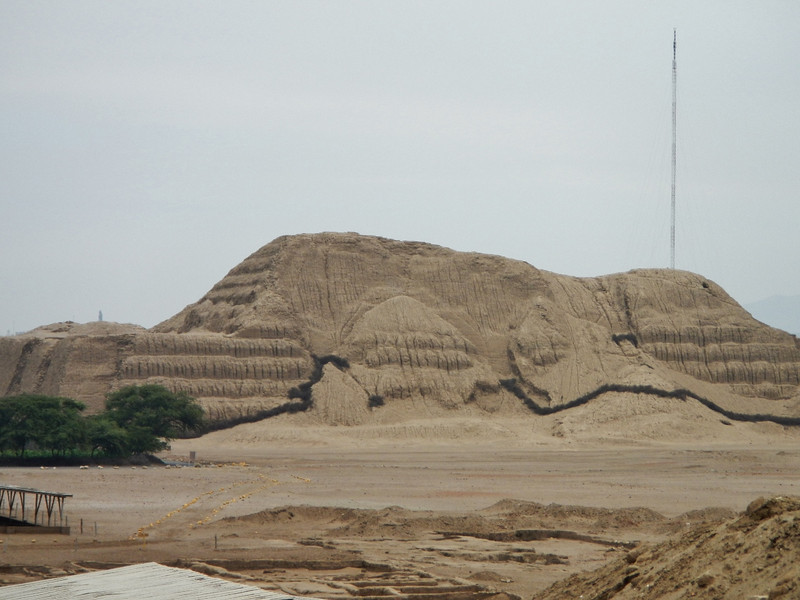 Everything was made of these mud bricks.

The hole in the wall is where Spanish grave robbers broke in and looted in the 1500’s.

This hairless Peruvian dog was greeting tourists at the visitor center. 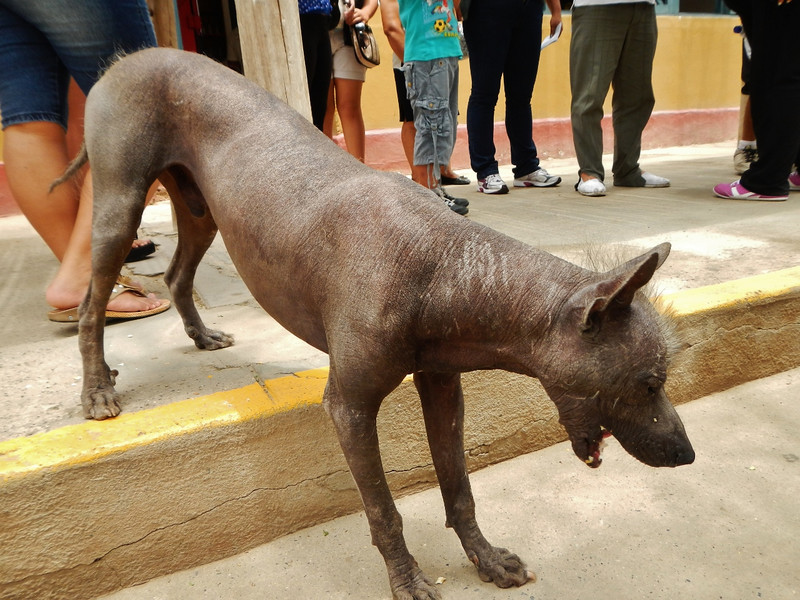 Next we went to Chan Chan, this place was HUGE! 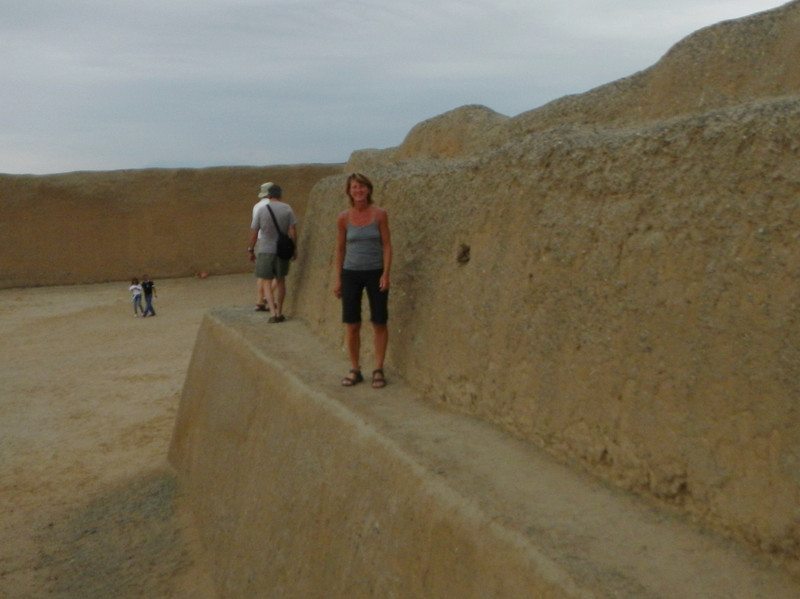 Only a small part of the ancient city has been excavated. The Trans-american Highway bisects the site and only the southern half is protected. On the northern half of the site we saw crops, a garbage dump and some houses being built.

We enjoyed the day at the ruins and learned and experienced way more than I have time to write about here. Take a few minutes to click on the links above, pretty interesting  stuff.

Back to the ride!

Sunday morning we saddled up the moto’s and had a plan to explore Canyon del Pato. Do a search on You Tube for Canyon del Pato to see why we wanted to go there. 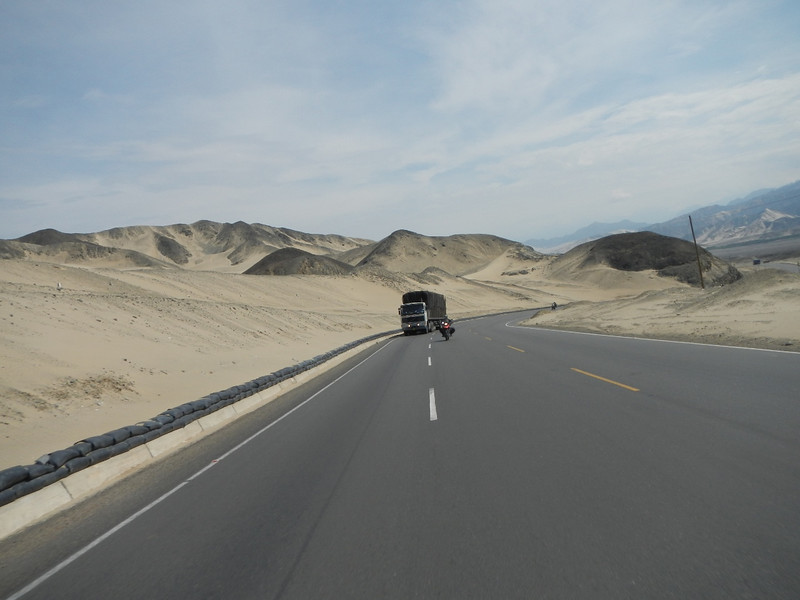 Then, after some difficulty finding the road because the two maps and the GPS did not agree if the road even existed, we headed into the canyon.

After about 50 miles we stopped for a snack at the point where the pavement ends and the road heads up into the mountains through the difficult section of Duck Canyon. 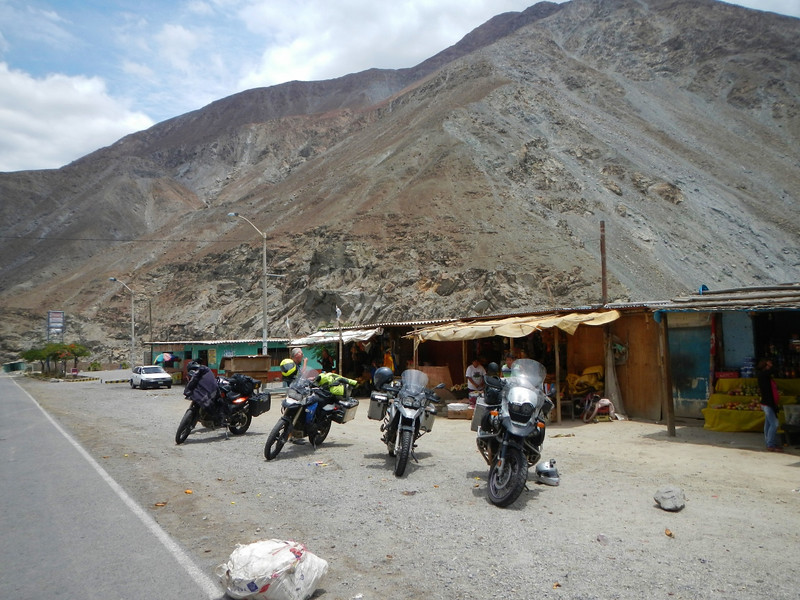 This road was totally amazing, the views were larger than life and stunning.

The rushing water of Rio Santa was nearly black. 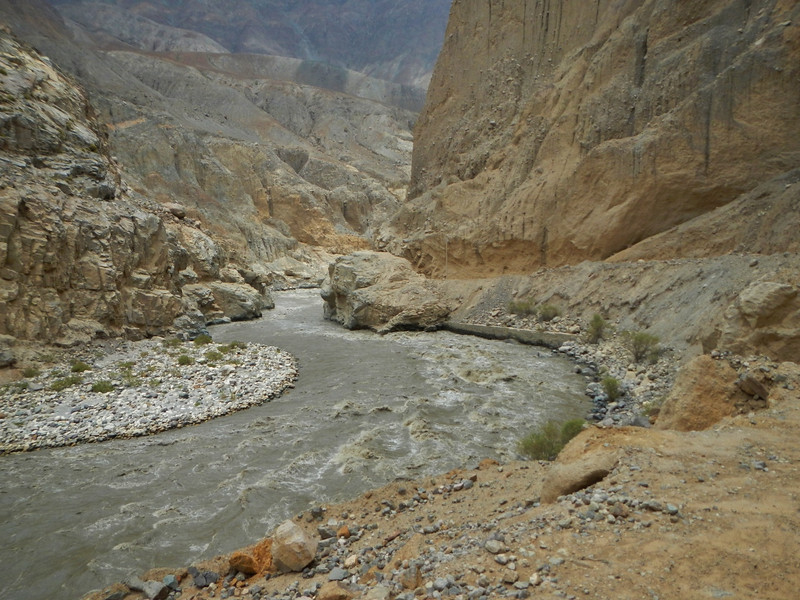 My wimpy camera doesn’t even come close to capturing the majesty of this canyon. I almost just stopped taking pictures.

Traffic was light with the occasional bus. Think about that bus going over that bridge….

Roughly 20 miles into the dirt section we see an adventure bike riding towards us. I can tell from the distance it’s a big BMW with panniers, as it gets closer I notice it’s yellow and as it gets even closer the rider has a red helmet. Could it be?????  Sure enough it’s our 6th rider Michael riding towards us! Michael left us a few days earlier to get to Cusco a few days before us. 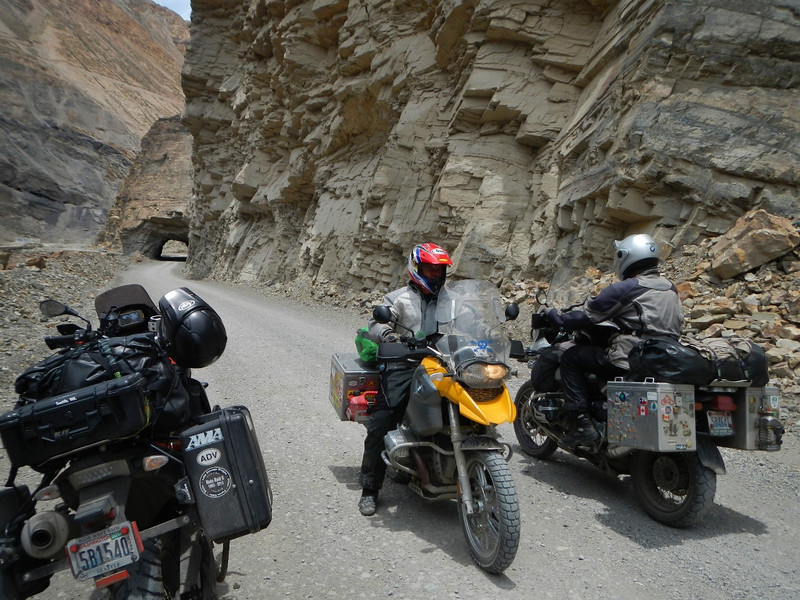 What was he doing here? Why was he going the wrong direction? We found out that he got an early start into the canyon and rode almost to the end where it connects with the main road (3) and a bridge had been washed out so he had to turn around. Bummer! The good news was that his misadventure probably saved us 4 hours of riding the dirt road in and out. The bad news was that we missed the best part of Duck Canyon that was beyond the bridge. Personally, I was really disappointed because Canyon del Pato was high on my list of things not to miss in Peru.

Dejected we rode with Michael to the port town of Chimbote where he had stayed the night before and checked into the same hotel. 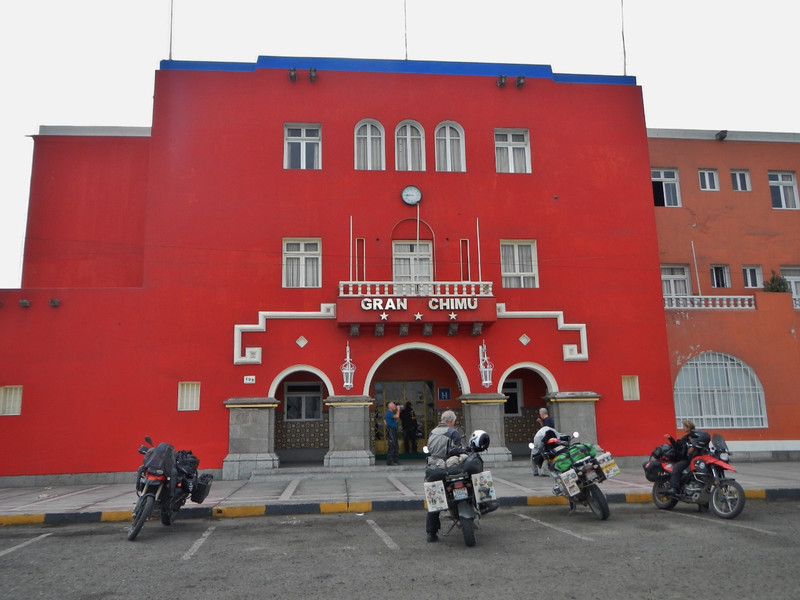 It was an interesting building that was easily 100 years old, I tried to find some history of the structure but came up blank. Pretty basic room. 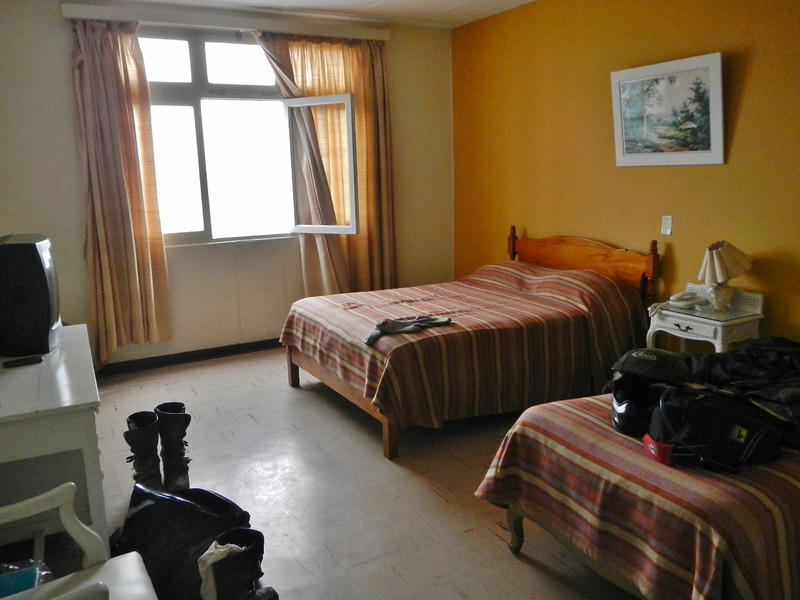 Had a nice view of the sunset out the window. 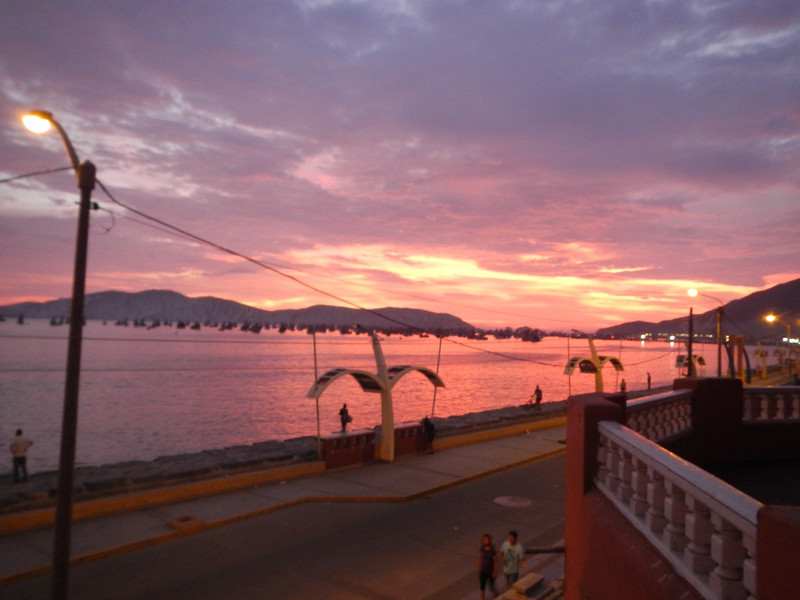 We took advantage of the open window to dry some laundry.

Monday we needed to make tracks towards Lima where we had appointments to get new tires on the bikes. After a leisurely start we left the port city and were back in the desert. I was expecting another relatively boring stretch of desert road but was surprised to discover some of the best riding of the trip through sand covered technicolor mountains. Again, I took pictures but my wimpy camera absolutely did not come close to capturing the colors. There was SAND of every color in the rainbow, how can that be? 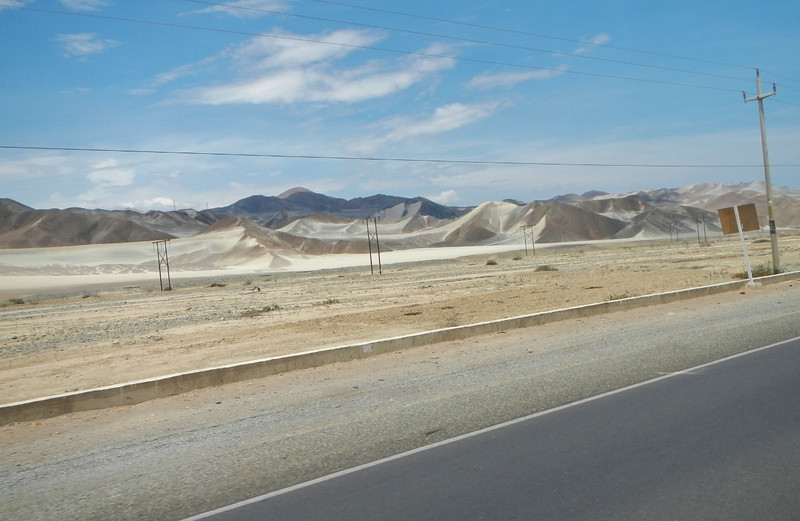 Ok, I just went back to look at my pictures, none capture the true beauty so I only picked two to post here. I would go back and ride that road anytime.

We ended the night in the small town of Chancay at the Hostal Villa De Arnedo. A nice place right on the town square. We went for an evening walk and I was kicking myself for not bringing my camera. They have a street market that was one of the most amazing I’ve seen, blocks and blocks of booths with everything you could imagine for sale.  Seriously, WalMart has nothing on this place.

Today, off to Lima!

Thanks for reading. Donn and Deby 🙂 🙂