Has it been a week already? Geesh, I must be getting lazy in my blogging duties. We’ve had some great days riding and a couple of adventures along the way. I left off last Tuesday in Cafayate Argentena where we spent an extra day catching up on laundry, some bike chores and a day of rest. Wednesday morning, Deby, Michael and I saddled up our steeds to ride south. Dave, Keith and Jim were still a day or two ahead of us and we were hoping to get in a few miles to eventually catch them before Pucon. We were in the middle of Holy Week in Argentina, which is a major holiday and we heard from our advance scouts, that hotels were full in every city. With that in mind we made reservations at a casa in Chilecito, Argentina. According to my GPS we rode exactly 300 miles between hotels. I realize now that I only took a few pictures from the day. Here’s one from a beverage stop at a small town. 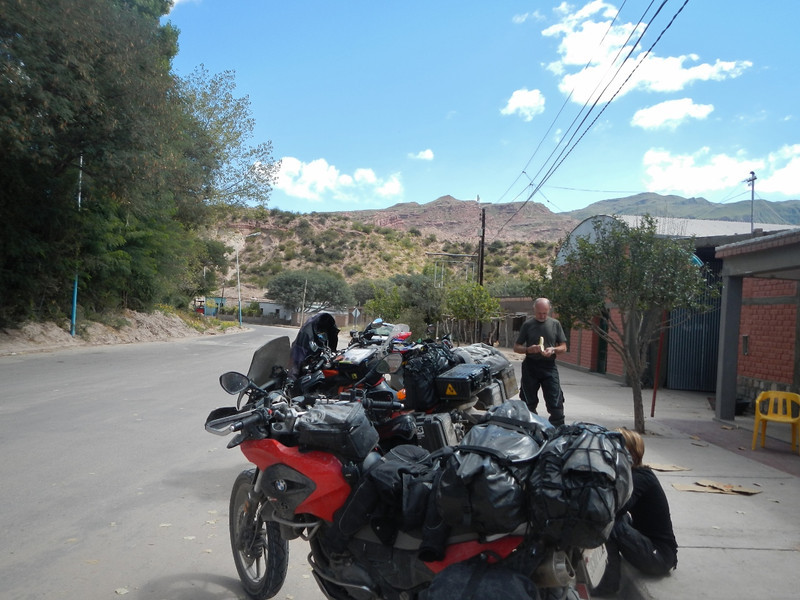 We had a room booked at the Cabana la Martina which was a short distance from El Centro. It was a nice country stay in a stand alone cottage with a full kitchen and two bedrooms, perfect. Instead of making the ride into town to look for a restaurant, Michael and I went to a nearby supermarket and bought provisions for dinner and breakfast. We dined under the stars at a picnic table on the grounds. We bought fresh bread and sliced ham and cheese from the deli to make sandwiches with a side of potato chips. 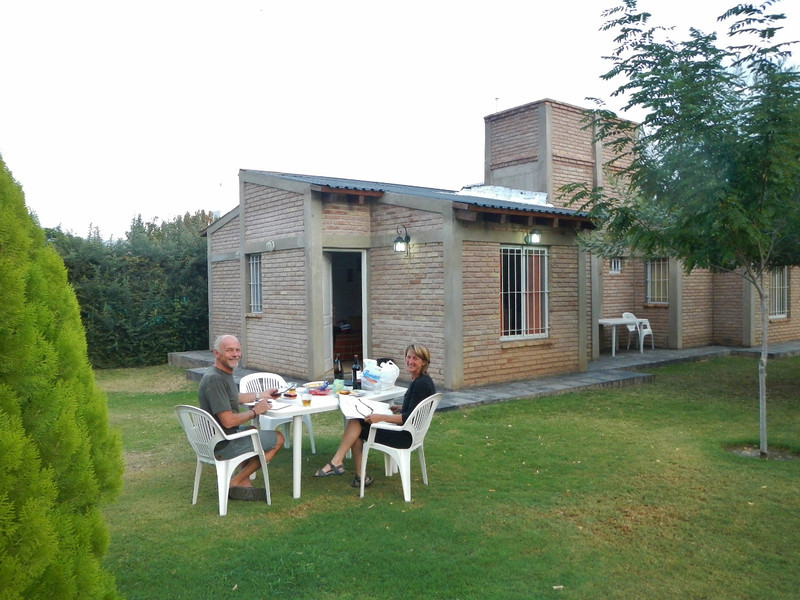 For breakfast, (because Ethan wants to know), we had yogurt with granola, bananas and coffee. A perfect way to launch the day. Interesting thing, yogurt comes in a plastic bag here and is really thin. Perfect to be used on cereal. 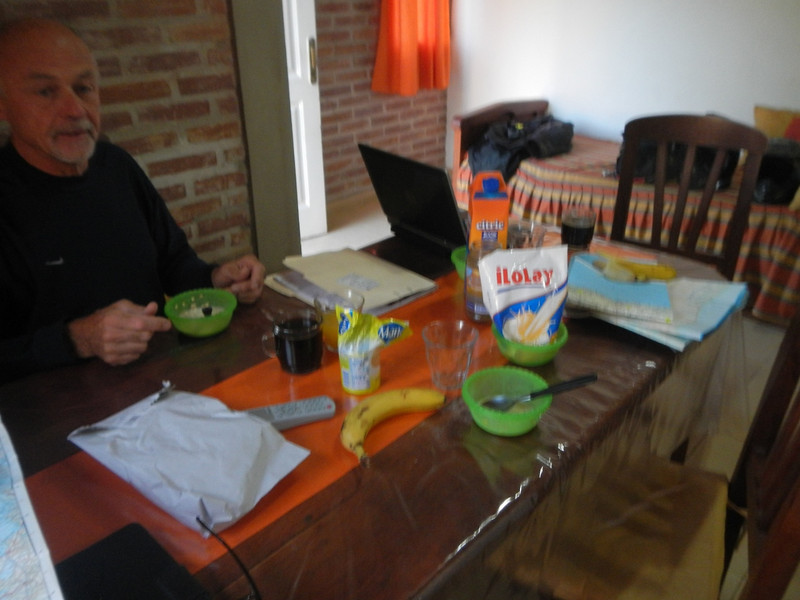 Thursday we continued south towards our destination of San Juan. Again, we went online to try to make reservations and everything was full. We finally booked what I thought was two rooms at the San Juan Hostel. Wrong.

The ride towards San Juan started out great, winding through some red mountains.

It wasn’t long before the pavement ended.

I don’t know why, but it was fun riding on red dirt. 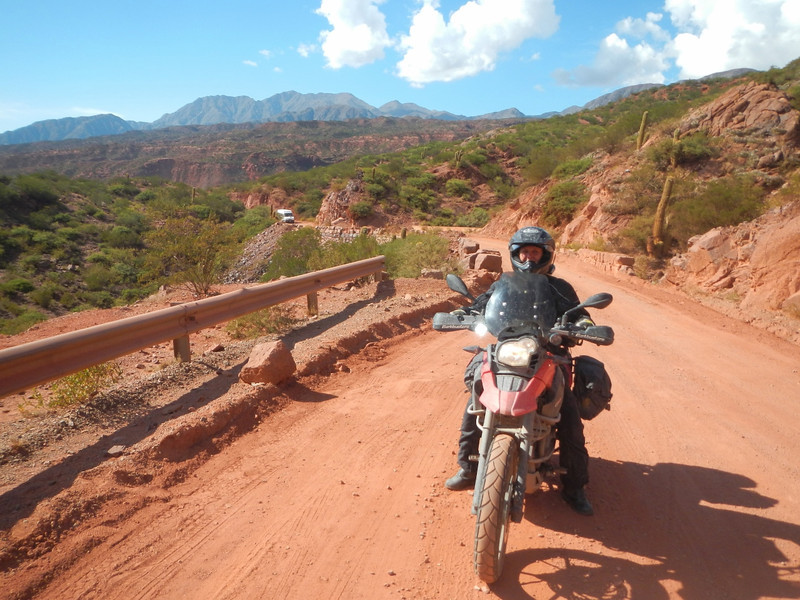 As usual, the road was cut into the side of the steep mountain. 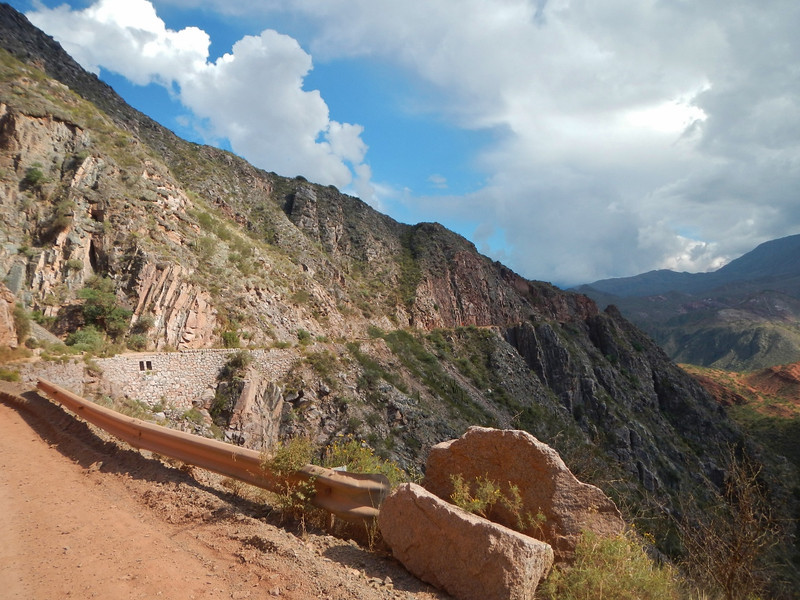 I’m glad it wasn’t raining because it would have been slick. 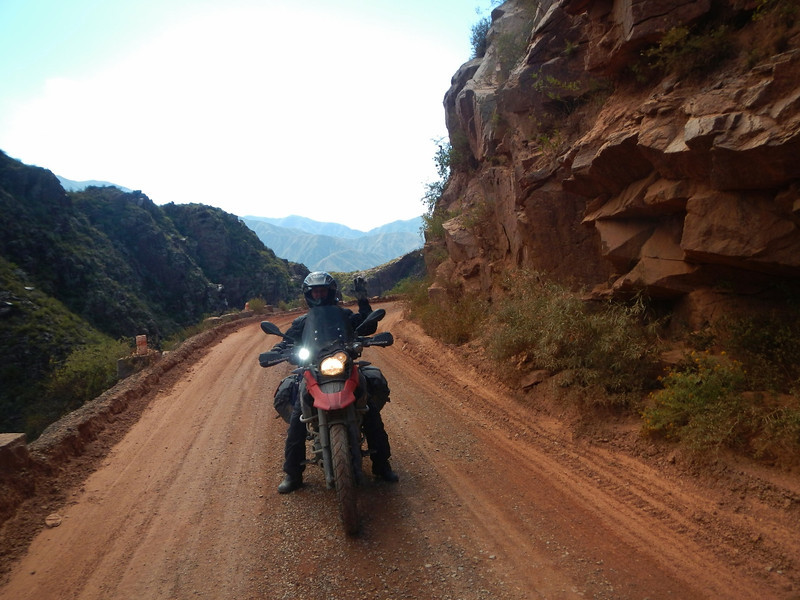 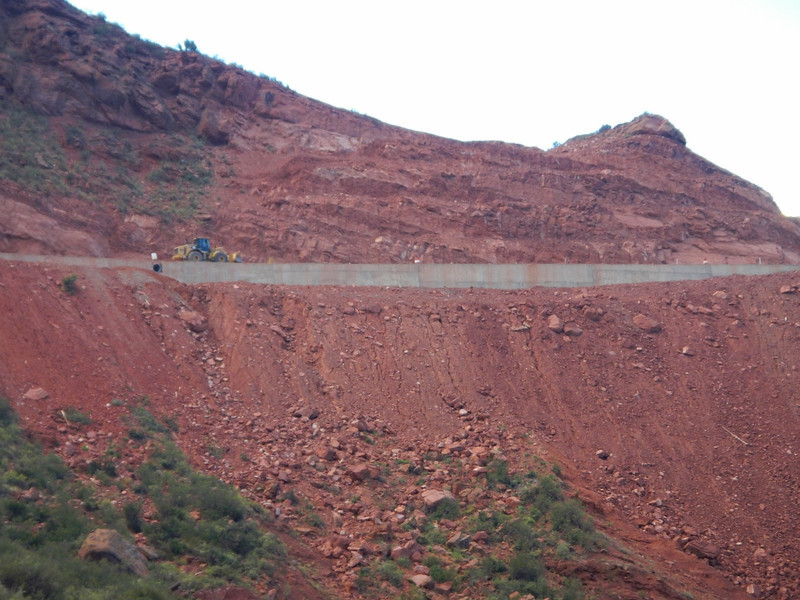 Somehow after this we lost Michael. When it’s the three of us we don’t always ride within sight of each other and he had the information on the hostel reservations so we weren’t worried until we arrived in San Juan and there was no sign of him. While we were waiting I went to check into the hostel…. hmmm, not two rooms as I thought but two upper bunks in a small room with about eight bunk beds. That wasn’t going to work.

The person running the hostel spoke decent English and was nice enough to make a few phone calls. Even though all the hotels were full he found us a private room in a hostel down the street. It had a shared bathroom but Deby and I could have our own room for $35.00 USD. We jumped at that and left a message that if another biker showed up to send him down the street.

We got unpacked and the first thing I did was fire up my laptop to check Michael’s SPOT. Sure enough he had just set off a “check in” from the main square of San Juan. I grabbed my helmet to go find him and as I walked out saw Michael standing next to my motorcycle. That was easy!

The next day was Good Friday. We had a message from Jim, Dave and Keith that they planned to be in Vina del Mar just on the outside of Santiago, Chile. Concerned about finding a hotel on Good Friday I went online and booked rooms for the three of us in Valparaiso which is close to Vina del Mar. We checked the miles and it was about 350 miles and included a border crossing, yikes! The previous crossing into Chile from Peru was easy and only took about a half hour so we hoped that would be the case again and headed south to the Paso Los Libertadores crossing between Mendoza, Argentina and Santiago, Chile. You can click on the link to read about it.

We got an early start and made some really good time including a fast bypass around Mendoza where we turned west into the mountains. Beautiful weather and great stretches of road greeted our day. 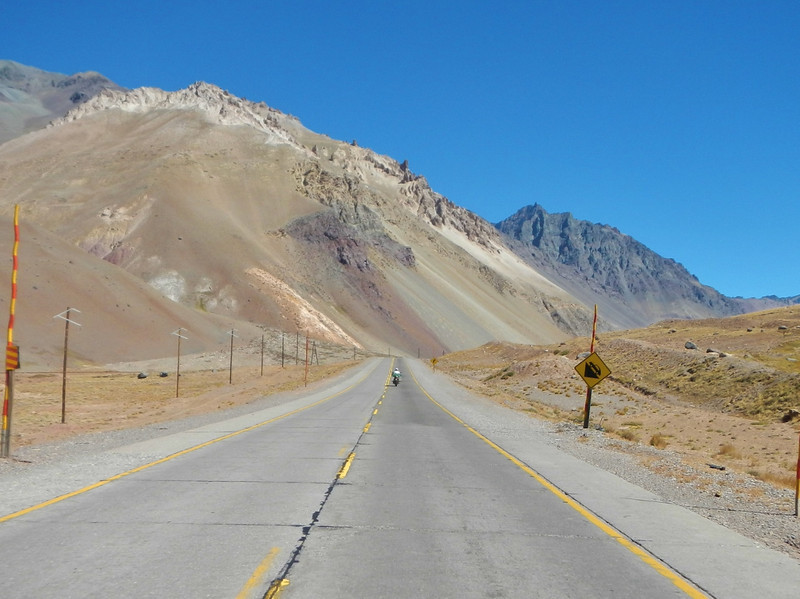 By 1:30 in the afternoon we had gone almost 200 miles and came to a small mountain resort town of Uspallata, only about 50 miles from the border, we were feeling pretty good about completing the last 100 miles into Santiago and catching up with the rest of the group. Just as we were leaving town I saw three big motorcycles coming towards us, hey, that looks like Dave! Then Jim and Keith! What were they doing going the wrong way? We stopped and had a small reunion on the side of the road, we hadn’t seen them for a few weeks ever since we split so we could hike Machu Picchu in Peru. They had turned around because a gas stop on their GPS didn’t exist and they needed to return to Uspallata to get gas. Glad to be back together we agreed to wait at the border for them.

The time stamps on my GPS and camera documented the rest. It wasn’t long after Uspallata that traffic came to a halt, it was 2:00 PM. As far as we could see down the mountain road cars were stopped. Thinking it was a construction delay (part of it was) we did what is common for motorcycles to do in Central and South America, we rode past all the parked cars. I’m not sure but I think we rode for at least 2 miles and passed hundreds of parked cars. I was starting to feel a little guilty. Eventually we came to the entrance to a long tunnel between countries. That must be it. We “filtered” to the front of the line where  the cars were stopped at a toll booth. No cars were passing through. I somehow managed to ask and determined that there was no toll for motorcycles and we would just have to wait for the tunnel to open in one hour. I wasn’t sure why it was closed but went back to the bikes to report to Deby and Michael. When I got there Jim, Keith and Dave were in line with us. They too had passed the line of cars and parked near the front with us. The hour went quickly as we got caught up on three weeks of riding stories. Eventually the tunnel opened and we went through. On the far side as we exited the tunnel traffic was stopped again. What? I looked ahead and as far as I could see down the twisty mountain road cars were stopped. They were only letting so many cars through the tunnel at a time so cars wouldn’t be stuck idling in the tunnel. We came to a snow shed that was probably a half mile long and was full of stopped cars. Somehow after we passed cars on the shoulder and rode to the entrance an official person moved a cone and told us to ride on a gravel road along the side of the tunnel. Wow! We must have passed another hundred or so cars!

Here you can see the snow shed way in the background, it was full of cars.

This next picture was taken at 4:48PM. 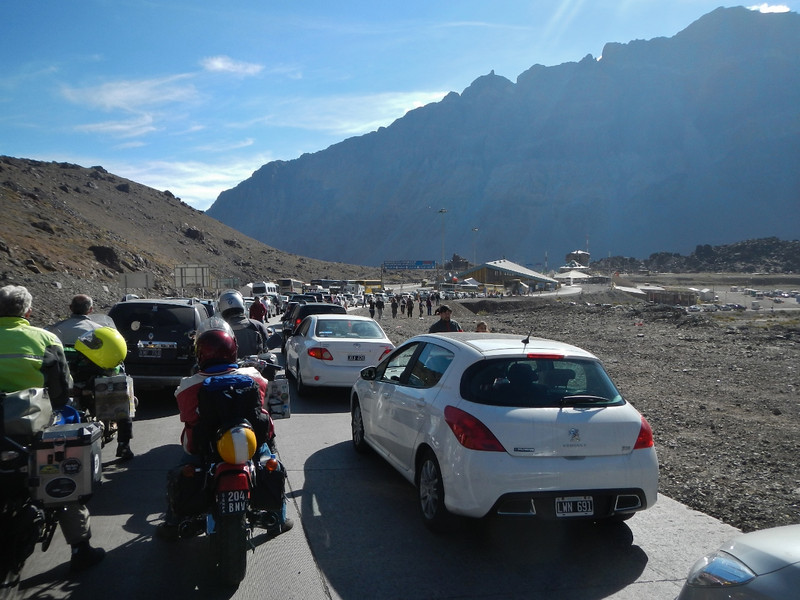 After the shed we were within sight of the border crossing but as we got closer there were police patrols watching for people cutting into line. I fell back and let Keith take the lead. When the police stopped him I pulled in behind a car to watch the outcome. Sure enough, Keith and Jim were being turned around. Surely they wouldn’t be sent back the many miles through the tunnel? The came back to me and tucked in with us thanks to an understanding driver behind us. We resigned ourselves to sitting out the final mile in line as the clock ticked towards sunset. 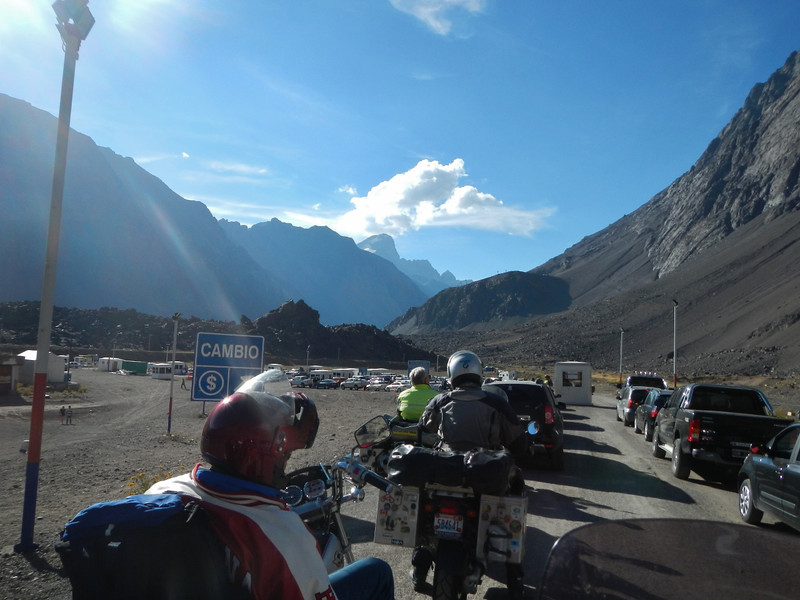 Since we had plenty of time to discuss the situation with the travelers around us we learned that on the Argentina side there was road construction and they only let traffic go West from 7:00 AM to 7:00 PM and East during the nighttime hours. Holy cow! It was nearly 6:00 PM and we were barely moving towards the border.

This picture was taken at 6:44 PM, we were almost cleared to enter Chile.

The border crossing is at 10,400 feet, it was getting dark, cold and we had prepaid hotel rooms in a city 150 miles away. Just before 7:00 we were set free by Auduana and Michael, Deby and I raced down the mountain to try to get through Santiago into Valparaiso, in the dark before we dropped from exhaustion. Dave Keith and Jim didn’t actually make reservations anywhere so they were going to ride and hope they found a place to stay in the peak of of the holiday week.

We made it about 40 miles when we came to the town of Los Andes and saw a nice looking hotel on the right. We rode past it and then I stopped. After a brief pow wow we decided to turn around and see if by chance they had any rooms. I was in the lobby negotiating our fate when our three amigos pulled into the parking lot. Great minds think alike.

Yes, they had rooms, we were in. We settled into our rooms and then met in the hotel restaurant, together again finally, and spent what was left of the evening swapping tales and catching up.

I’m sure most of the cars we passed never made it across the pass that evening, we barely did. Perhaps that is why the hotel had rooms? We’ll never know, but I was glad to eat the non-refundable charge for the Valparaiso hotel.

Next…. the final stretch into Pucon, the destination city for Keith and Dave’s trip 50 years ago.

3 thoughts on “Into Chile – the longest crossing yet!”