We allocated nearly a week in Buenos Aries to prepare the motorcycles for shipment. The week started on Monday with our scheduled meeting with Sandra at Dakar Motos. Sandra and her husband Javiar run a small motorcycle repair shop and hostel and they help motorcycle travelers arrange shipping to and from Buenos Aries. They are the same people that helped Michael ship his bike home the week before. Sandra was another of the people who went out of her way to help make arrangements for Dave’s bike. When we had questions about the paperwork in Bahia Blanca we would get Sandra on the phone to explain the process. She was great.

It was about a 20 minute ride from the hotel to Dakar Motos on the Buenos Aries freeway system. We were all a little nervous about these last few miles in heavy traffic in a strange city after what happened to Dave so we rode just a little slower. Despite being the second largest city in South America with about 3 million people the traffic seemed pretty sane. I was thinking it wasn’t really any worse than I-5 during rush hour in downtown Seattle. The dynamic was that we didn’t know our way around and needed to be on the lookout for our various exits. My GPS had the route but the street names on the GPS didn’t match the names on the signs at all. The freeways are named after famous generals so my GPS would say exit on highway 002 and the sign would be for general so and so. By this point in the trip I was used to these GPS anomalies, we managed with no problems and arrived at high noon.

While there we met two other travelers from the US who were staying at the hostel, Suma and Hoa. They had a crash and Suma broke a bone in her hand. They were there when Michael arrived the week before and had heard about our journey. Nice people. you can read about their travels on her blog http://whyweroam.wordpress.com/ I stole this picture from her blog: Yikes, this can be a dangerous sport!

Here’s Sandra explaining the shipping process to Keith and Deby.

We left Sandra’s with detailed instructions for the process over the next few days, we had an appointment the next day for 10:30 AM at the airport where we were to meet Franco at the international cargo area. That left the rest of the afternoon free to get back to the hotel and start preparing the motorcycles for shipment. The first chore was to get the bikes washed. We’ve been told that customs in the US does not like it when muddy motorcycles arrive for inspection, we weren’t sure if this was true but decided it would be nice to have a clean motorcycle when we got home.  Keith found a car wash a few blocks from the hotel so we worked shuttling the five motorcycles with four riders back and forth. There are no self service car washes in Argentina, at least that we could find so we left the bikes to be cleaned and were told to be back in a couple of hours. I wish I would have had my camera when we returned. All five motorcycles were parked in a row in front of the car wash all shined up like new. Wow, the tires and rims were cleaned and wiped down with stuff to make the tires shiny, it looked like they waxed the paint and were polishing the windshields when we arrived.

Jim took this picture of the clean bikes in front of the hotel.

Tuesday we took turns shuttling the bikes to the airport and parked at the gate.

Jim and Keith rode back to the hotel to get the last bike.

Sometime during that trip they had a close call with a bus! Yikes, be careful! I’m not sure of the details but evidently a bus tried to squeeze them in a traffic circle and was close enough to contact Keith’s leg. Jim maneuvered successfully and they got out of the situation. I was glad to see them return in one piece. Now we just needed to ride into the warehouse and onto the pallets without falling over.

The whole process is really organized, someone said they ship about 100 motorcycles per month out of here so they have it down to a science. The first step is to ride onto a scale to determine the weight. Mine was 294kg which is about 650 pounds with all my gear. Wow, really? According to the manual my motorcycle is supposed to weigh 400 lbs with nothing on it. All my stuff is 250lbs? This did not include me.

After weighing we ride to the pallet area and drive up a small ramp onto the pallet. At this point I had been warned not to take pictures so I managed the following pictures with my iPhone pretending to be checking e-mails.

A crew of people helped us strap down the bikes while we were busy removing the windscreens and disconnecting the batteries.

The cost of shipping is weight x height x width x length. Anything we could do to reduce the dimensions would save us money. Some people go overboard and remove wheels and handlebars, we just took off the panniers, windscreens and mirrors. 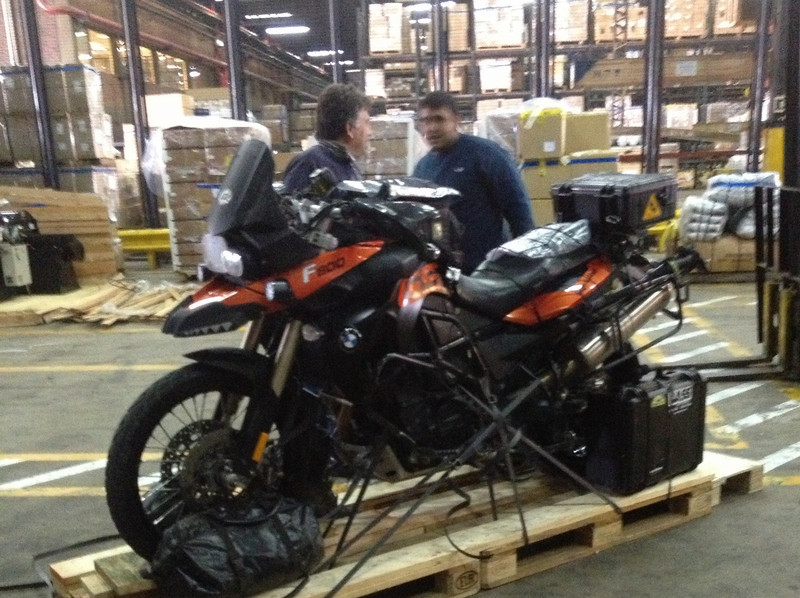 We were allowed to strap on bags with riding gear but no “personal effects”. I was glad not to have to carry my bulky boots, jacket or riding pants on the airplane as luggage.  After the bikes were strapped down they were carried via forklift to get x-rayed.

Here is Deby’s bike and bags going to get scanned.

Deby’s bike came back with a customs woman following behind. Something came up in the scan that they wanted to inspect. One by one they made her open her bags to check the contents…. jacket, ok…. pants, ok…. boots, ok…. rain gear, ok….. what’s this? A huge bag of rocks? NOT OK. Another? Four more bags of rocks??? Oh, what’s this? A huge bag of shells? NOT OK. Deby was totally busted. At first we thought they wanted us to throw her treasures in the trash can but instead we convinced them to let us take them in our bags back to the hotel.

Finally after x-rays the bikes are all wrapped for the ride home.

We managed to complete the whole task before the 1:00 siesta which was a good thing or we would have been there all afternoon. We gathered our remaining bags, including the rocks and took a cab to our new hotel in the heart of Buenos Aries, the Amerian. That completed our Tuesday tasks.

Wednesday our job was to go to the shipping office in downtown BA to find out the cost for each bike and the pay in cash by making a deposit at their bank and bring the receipt back. We had been told that this was a cash only transaction so we arranged to have approximately $2,000 US dollars with us.

We had read many places how dangerous BA was for pickpockets, there is a famous report how President Bush’s daughters were robbed in BA despite having secret service protection. Below is one account, click on the text to go to the original blog post.

“Buenos Aires is, unfortunately, a pretty easy city to get robbed in. Shock! I know. It’s quite a revelation. The number of expat or tourist forum and blog posts dedicated to the topic is pretty staggering; you’d think that every single foreigner who ever set foot in Buenos Aires had been robbed at least once.

That’s undoubtedly not the case, but still there’s no denying that the thieves in Buenos Aires are both plentiful and good at their jobs. In 2006, then-First Daughter Barbara Bush was robbed while eating at a restaurant in San Telmo (her purse and cell phone were stolen) despite being surrounded by a detail of Secret Service agents. You just have to respect those kinds of skills!“

So do the math, $2,000 x 5 motorcycles and we were walking around in the same neighborhood with some real money. It get’s better……

The official exchange rate for dollars is about 5 pesos per USD but on the black market, they call it the blue market here, you can get 8 pesos per USD. We were told we could pay for the shipping in either pesos or dollars. Hmmm, between us we could save a couple thousand dollars by finding some shady person on a street corner and giving him our $10,000 to exchange for a huge stack of 100 peso bills. I thought the adventure in a trip like this would be riding the motorcycles not navigating the underworld of the BA blue market working out a cash transaction.

One of the less crowded streets in BA.

So….. what to do. Greed got the best of us and we made a plan that involved multiple transactions over a couple of days. I’ll leave the details out but yesterday we managed to deposit our money in the correct accounts and retrieve our way bills. It took longer than expected and we spent way too much time walking the crowded BA streets with huge stacks of bills shoved in our money belts and pockets. I was glad to get rid of the cash and revert to my usual tactic of keeping only the money I need for the day in my pocket.

Back at the hotel we had dinner and toasted another day of accomplishments. We were done.The motorcycle paperwork was completed, the bikes were paid for, wrapped and on their way. Nothing left to do but hang out a few more days and enjoy the city. Here is a picture of our hotel.

I’ll try to do another wrap up post when I get a chance. Essentially with the bikes officially gone the ride is over. We accomplished our goal and had an amazing adventure doing it.

I think every travelogue should end with a beautiful sunset picture. This was the view from our hotel room last night…. fitting. 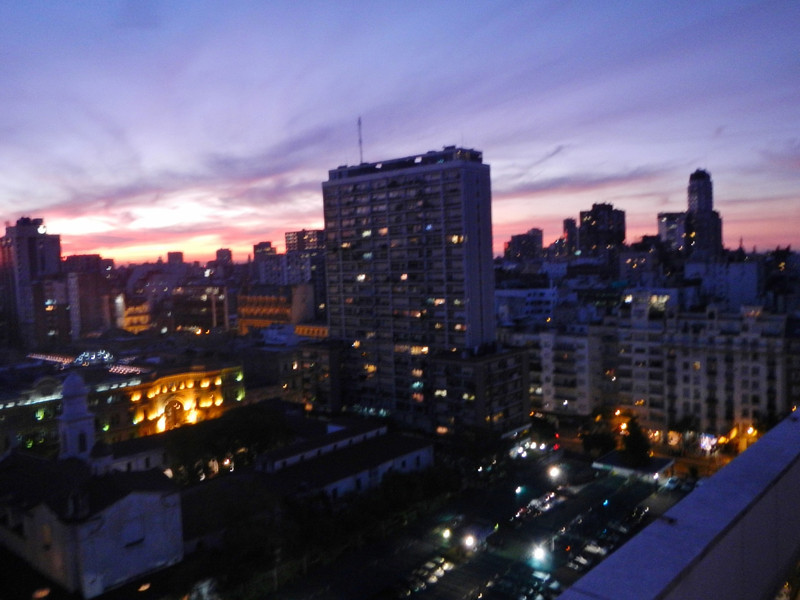 8 thoughts on “Motorcycles: It’s A Wrap!”