The only way to start the day.

we moved on to this:

And this for Deby:

The road to Mulege had some long straight sections. There is an offroad route south and then west to El Arco but we have reservations near Cabo Pumo for Monday and I don’t want to take a chance with any breakdowns. We just settled in and enjoyed the ride. It was slightly less than a year ago we followed this route on the Motoraid trip. I kept looking ahead wondering where Keith, Dave, Jim and Michael were.

But in my mirror I still saw my favorite Motoraid riding buddy. 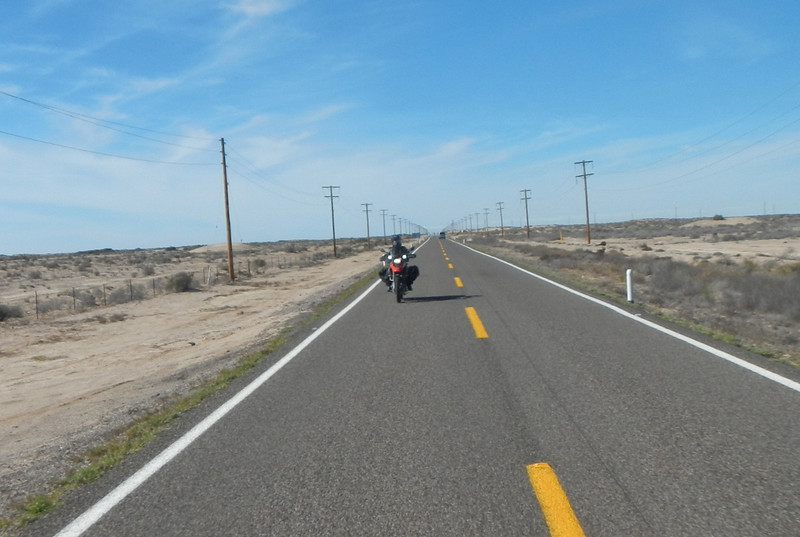 The view from behind bars – cruising at about 70mph.

Last year we stayed in Mulege at Serenidad, but this time we thought we would try something different. We read about Casa Granada in the Moon Baja book and decided to check it out. The advertise it as “A Classic Stone B&B” how could we pass that up?

Our hosts Lena and Kristian were made us feel at home in their casa.

After we settled in the first order of business was a walk along the estuary in front of the hotel.

As the sun set the birds were out hunting.

Shells were everywhere including this natural shell mosaic.

Casa Granada is literally next door to Serenidad so we walked over there for an excellent dinner of fresh fish. At the table next to us was Dale and Maria the couple from Washington state that we met at Coco’s.

Jock told us to look for the pictures of John Wayne, evidently he was friends with the owners. There were about a half dozen signed photographs of the Duke.

When we got back to our room the Wifi was still down so we entertained ourselves the old fashioned way, with books.

Saturday morning we awoke to an overcast sky and cool temperatures but magically the Wifi was working! After our mandatory coffee and a fantastic breakfast provided by our hosts Deby went off to scour the estuary for more shells and I got to work uploading pictures, videos and three posts. It was close to noon when we finally started loading up the bikes to ride south. Destination????

We weren’t sure, it was late in the day and we were a little ahead of schedule so we decided to attempt the whole 85 mile ride to Loreto.

So why not get to Loreto early enough to park at our favorite hotel (Hotel Oaisis) right in front of our room. 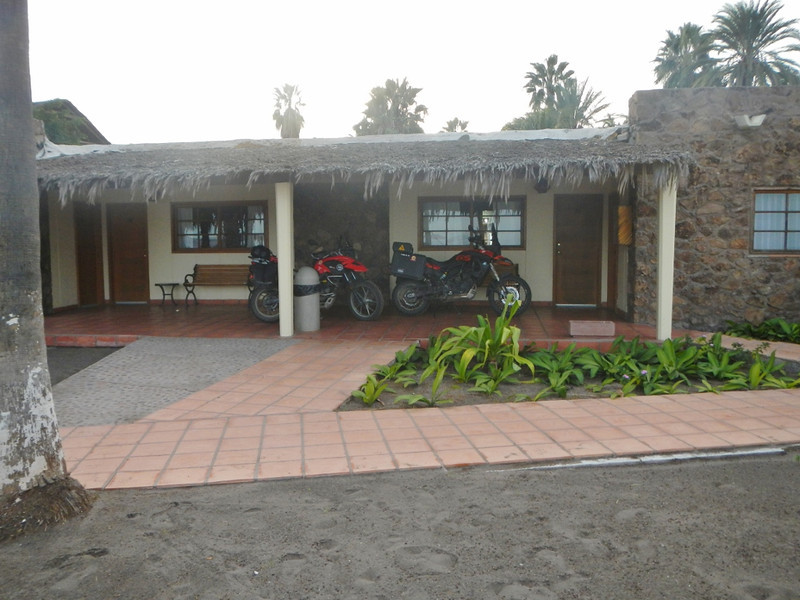 Spend some time walking around the town square.

Check out the oldest mission in all of the Californias.

Stop for a local Baja Cervesa.

Take a stroll on the malecon (don’t fall over the edge – safety third).

And generally enjoy the view.

And that is what we did.

Next south! To where? Stay tuned.

11 thoughts on “Bahia de Los Angeles to Mulege to Loreto”