Sipping morning coffee at the poolside restaurant at the Tripui resort we discussed…. camping. For over two weeks we’ve been hauling a tent, pads, sleeping bag (one dual Big Agnes – nothing like it), coffee making equipment and extra water. We mulled over a map and decided we should camp. Less than 100 miles away was Bahia Concepcion where we were told are some of the best beaches to camp in all of Baja.

You can read more about it by clicking HERE.

We were coming from the south so we checked out the locations one by one. The entrance to El Coyote didn’t seem too appealing so we continued on…

We finally came to Santispac beach located on the northern edge of the beaches. Our Moon guide book said it was the most protected from the wind and had a small restaurant, sounded promising. Santispac, like most of the beaches along Bahia Concepcion was a strip of sand between the highway and the Sea of Cortez dirt or gravel roads run down to the beach and people camp along the water. We turned onto the playa and found an unused plapa.

Setup our tent, yes we really did, and decided to call it home for the night.

I wasn’t too sure about the neighborhood though…. 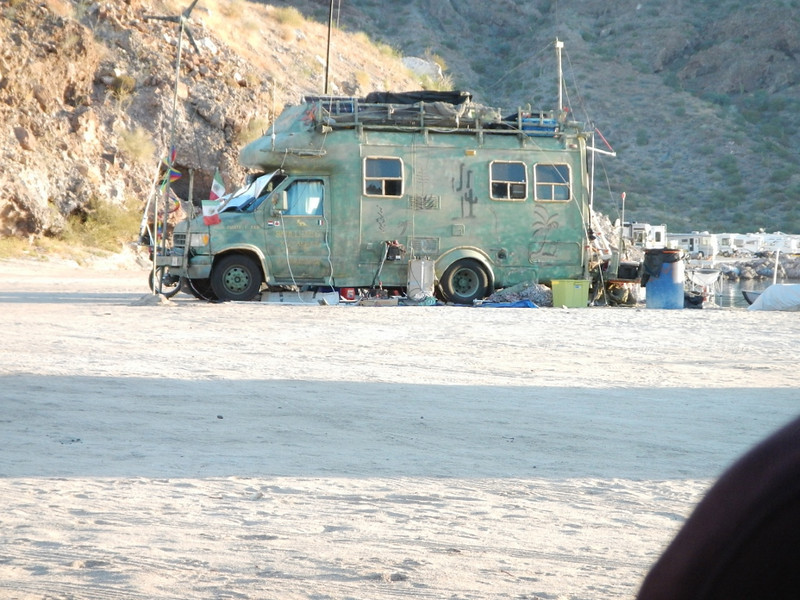 These guys were “camping” near us and we hung out most of the night.

They live there most of the year and don’t really seem to need to work.

Before dark we walked to another section of the beach where a caravan of huge RVs had pulled in for the night. There must have been 20 or 30 parked in a row. As luck would have it we were just in time for happy hour at the beach restaurant.

Everybody was there… the place was packed with RV people and their dogs. I’m totally bummed I forgot to carry my camera, it was an amazing scene. There was one woman with a short skirt and spike heels walking on the sand floor in the bar. The margarita’s were flowing, two for one and slowly the place was getting pretty rowdy. Everyone was friendly and talked to each other, we joined in too easily and began to wonder if an RV was a better mode of transportation than a motorcycle! That was the clue that we had enough and we ambled back to the tent where our neighbors has a ginormous bon fire waiting for us. We sat around swapping lies and stories well into the night before dragging our sorry bodies into the tent and collapsing into our sleeping bag. Ten minutes later I realized I didn’t pack the new inflatable sleeping pad but the old one with a leak. Oh, well, it didn’t really matter too much and we drifted off with the sound of the surf and the soft sand under our bags.