We made a decision to ride the southernmost loop around the Baja peninsula to get to the small town of Aqua Calienti where we wanted to visit “Gringo Doug” of Doug’s Baja Norton fame. We had avoided this part of Baja in the past because of the traffic and commercialness (is that a word?) of Cabo San Lucas and San Jose del Cabo. This part of Baja is where all the big resorts are and it’s more like Waikiki than anything Mexicano. On the other hand at least we could say we rode to the southern tip of Baja and check it off some imaginary list. To make matters worse, the whole route is a new 4 lane highway, hardly an adventure road but we would make good time.

Noting that we would be going past Pescadero again and the Baja Beans roasting company we decided to stop there for some good coffee and breakfast only to find out they were closed on Mondays. Somebody came out and recommended we try Marina’s restaurant a short way up the road.

It seemed like a nice place, clean and spacious.

One of the patrons at a nearby table told us to look at the vine like branch above our heads. A humming bird nest was balanced on a stick and a leaf.

The humming bird flew away for a minute and Deby got up on a chair to take a picture, what was in there? Eggs? Baby birds? The nest was too high to see into so she just held the camera and hoped for the best.

After that it was south to the big city. The ride was actually somewhat enjoyable, light traffic, sweeping turns, views of the ocean and nearby mountains. The day was sunny and warm but not too hot, a perfect day for an easy ride.

Once in Cabo the highway became a four lane boulevard with topes, stop lights, construction and bumper to bumper traffic. Not much picture worthy except when we stopped at a shopping center to visit an ATM and notice the parking lot security.

I suppose what ever works…

We followed Mex 1 around the southern tip of Baja where eventually the road turns to the north on the way to the Cabo Airport. We wound through heavy traffic dodging the tourist taxi-vans taking resort goers to the airport. Once north of the airport the road narrowed to a country two lane road and virtually all the traffic disappeared, nice.

After about 20 miles we came to a marker for the Tropic of Cancer, we had to stop.

“The Tropic of Cancer, also referred to as the Northern tropic, is the circle of latitude on the Earth that marks the most northerly position at which the Sun may appear directly overhead at its zenith. This event occurs once per year, at the time of the June solstice, when the Northern Hemisphere is tilted toward the Sun to its maximum extent. As of 2014, it lies at 23° 26′ 14.675″ (23° 26′ 16″) north of the Equator.[1]“

They had a nice little visitor center with some shops which were all closed. We managed to take a few pictures and eat a little snack before moving on.

The next stop was the hacienda of our friend Gringo Doug in the remote outpost of Agua Caliente just west of Santiago. We first met Doug on our 2012 Baja trip when we were encouraged to visit because of his connection to Norton motorcycles. For a little background – I’ve owned Norton motorcycles for most of my life since buying my first one when I was 18. Some years ago I restored a Norton I retrieved from California and did a complete restoration of it. During that time I joined the Northwest Norton Owners NWNO www.nwno.org and the International Norton Owners Association (www.inoanorton.com). For the last few years Deby and I have attended the INOA rally including the 2013 rally last July in Wyoming where we annually reconnect with other Norton aficionados, Doug is always there so we reconnected. The other thing I have to say is that only I call him Gringo Doug, but the name seems to be sticking. It comes from our last visit when in his e-mail instructions on how to find his casa he told us to go to the only tienda in town and ask for Gringo Doug, since he is the only gringo in the whole town.  Doug makes a living restoring old Nortons out of his small shop attached to his house, his workmanship is superb and well known in the Norton community. Recently Doug updated his website http://dougsbajanortons.com/ to read more about it.

Doug gave us a warm welcome and a tour, he doesn’t get many visitors and seemed genuinely glad, and surprised to see us. 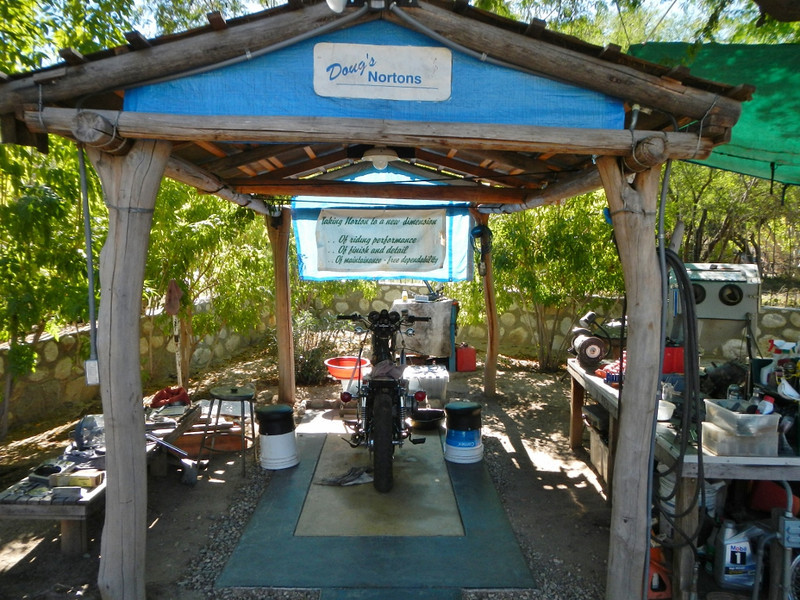 Doug rolled out one of his restoration projects from his “inside” shop.

A beautiful work in progress, still in the design stage as he works out the lines and plans the final product.

Deby waited in the outdoor kitchen while we talked Nortons.

Here’s a Norton he just took in from a customer he met at the 2013 rally. I look forward to seeing the final result. 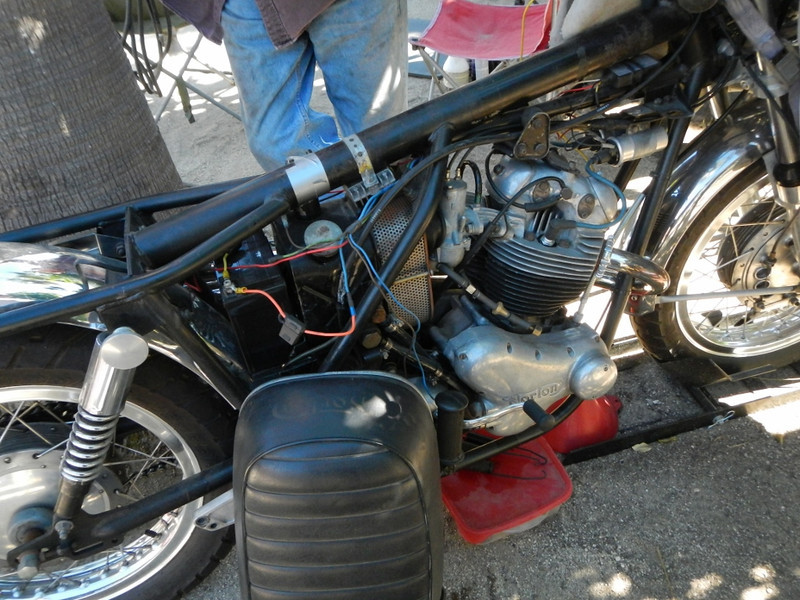 We posed for a final picture before Deby and I got ready to move out.

It was great to see Doug and hang out for a while, I look forward to seeing him this summer at the INOA rally in Oregon.

From Doug’s it’s a relatively short ride to Los Barriles, one of the kiteboarding capitals of the world. Every other person there is from Hood River Oregon, seriously. We stayed there in 2012 and sort of had a place picked out on the beach. On the way there I saw a sign for Rancho Buena Vista. I remember reading about that place and thought we would ride down and take a look. It was getting late in the day so we decided to spend the night at this resort on the beach. It ended up being an interesting choice for a place to stay……..here is an excerpt from the Moon Baja Handbook:

“In business since 1952, Rancho Buena Vista opened to host Hollywood celebrities for fly-in sport fishing vacations. Today the scene is much less glitzy – downright worn down in many ways – but the fishing tradition continues and longtime guests appreciate the simplicity of the accommodations and the quality of the food.”

They were correct about the “much less glitzy and downright worn down” parts. It was actually kind of sad. The famous restaurant was closed, maybe for good and as far as I could tell we were the only guests. We went to the bar that was conveniently located about 20 steps from our well worn cottage and chatted with the bartender who had worked there for over 20 years. He was nice enough and helped us order a pizza from a local delivery place to be brought directly to the bar. Not too bad. After a few minutes a gringo came in for his usual rum and coke. Cliff, had been going to the Rancho Buena Vista for nearly 30 years and ran down the whole history of the place. Indeed it was at one time a stop for the rich and famous and he regaled us with tales of grand parties in the great dining hall and bar. He proceeded to give us his opinion of the state of tourism and the ex-pat community in Baja, it wasn’t very positive.

Casita on the beach.

We watched the sun set and continued with easy conversation lubricated by beer, pizza and an evening with nothing urgent to do or anywhere to go. An interesting guy Mr. Cliff, and an interesting place, Rancho Buena Vista, I hope it works out for the best.

Tomorrow: We threaten to actually use our camping gear!