Our stay in Zacatecas was too short. Someday it would be fun to return and explore the city and surrounding areas. We were starting to get down to our last days available in Mexico and I was determined to check out one of the best motorcycle roads in the Americas, Espinazo del diablo or in English, the devil’s spine. I’ve heard about this road from many people over the years and always wanted to check it out.

Our launching point for the spine ride would be the city of Durango, the capital of the state of Durango. Our new four amigos on the BMWs recommended we stay at Hotel Pasada San Jorge. The hotel was right in the heart of Durango and the street in front had been converted into a pedestrian mall. We were told that the process was to double park on a nearby cross street, ignore any complaints by police and walk to the hotel to inquire about a room. We arrived in the early afternoon and the hotel staff instructed us to ride the motorcycles into the front door of the hotel and park in the Brasilian steakhouse restaurant. For those of you who haven’t traveled out of the US on motorcycles this is actually not that unusual. I made a short video of the ride into the hotel.

We had time to explore the city a little on foot before getting back to the hotel when the four amigos arrived. 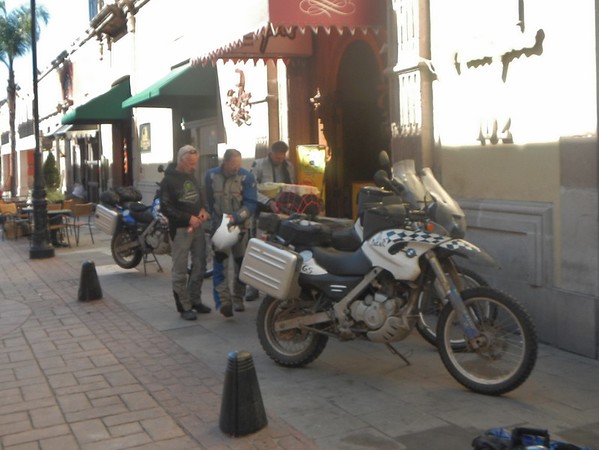 Sorry all the good parking spots were taken, they unloaded in front of the hotel and parked around the corner.

We ended the day together eating at the hotel’s Brasilian steakhouse, it was fantastic. In true Brasilian steakhouse style the servers came around with various cuts of meat and slice some onto our plates. Someone said they have over 20 selections and they kept coming and slicing until we couldn’t take it anymore. Content with one of the best meals on the trip and another fantastic night of motorcycle and travel talk we made it to our room to rest up for tackling Esainazo the next day.

According to dangerousroads.org this 180 mile long road has over 2,000 curves. I believe it. Nowadays, there are actually two roads, one is the old road winding through the mountains between Durango and Mazatlan and the other is the newer Quota, or toll road that roughly parallels the old road. The original plan was to ride to Mazatlan and spend an extra day on the beach but after some research and talking to people I was told the old road is all about the twisty roads and the new road is an engineering marvel. Wow, engineering marvel? As an engineer myself, I had to check that out, so which road to take? We decided to skip the wimpy beach stop and embrace the Adventure Riders we were and ride both roads. That would be 180 miles and 2,000 turns down to Mazatlan and then 180 miles of engineering marvel back. We couldn’t think of a better thing to do on what turned out to be the day of our 35th wedding anniversary.

For the first leg we rode with the four amigos. Out of the plaza in the morning with all six bikes.

Through town trying to keep all six bikes together. It brought back fond memories of the MotoRaid trip….

Finally onto the open road.

The roads and scenery were fantastic, turn after turn with light traffic and beautiful weather made for a memorable day.

Here is the track from my GPS.

With the elevation plot.

Almost 9,000 feet max elevation on the way down and then somewhat less on the improved road on the way back.

Here are a few more pictures I gleaned from the internet. My camera and photography skills were woefully inadequate to capture this road.

One of the engineering marvels, suspension bridge on the new road.

We stopped for lunch about halfway down at this typical roadside restaurant.

All in all one of the best days on the trip. Every motorcycle rider should endeavor to check this fantastic road off their to-do list. I’m really glad we rode it both ways to experience four hours of twisty fantastic turns and the return trip with the views, bridges and tunnels. This is one trip I’ll do again one day.