Adventure. From Dictionary.com
noun
1. an exciting or very unusual experience.
2. participation in exciting undertakings or enterprises:
the spirit of adventure.
3. a bold, usually risky undertaking; hazardous action of uncertain outcome.

Adventure motorcycle riding is one of the fastest growing segments in the motorcycle industry. If you’re new to this phenomenon check out www.ADVrider.com and spend time with the home screen slide show to get a better idea of this sport.  True, most ADV riders search out the toughest, rockiest, remote back country tracks to explore with their giant adventure bikes that have been outfitted with armor to protect against the inevitable crashes.  Deby and I have done that plenty of times, it’s fun and challenging. Below is a picture I took of Deby on the 2010 Sasquatch ride, one of her first adventure rides when she started riding 5 years ago. Since then we’ve ridden crazy routes including Moab, Colorado, Death Valley, the Continental Divide Route, Baja and multiple sections of Backcountry Discovery Routes in WA, ID, CO and UT. Deby is on her second motorcycle which now has over 30,000 well earned miles on it.

Yesterday was just as big an adventure, well inline with the definition above. According to my GPS we rode 310 miles with a moving time of 5 hours.

The day started in Kingman Arizona, a historic place on the famous route 66 that is actually one of the cities called out in the lyrics of the popular song. A quick early morning look out of the window at the Holiday Inn confirmed what I suspected by the sounds through the curtains, it was still raining. I turned on the TV which by some strange twist of technology failure only got one channel, Fox News 10.

The big headline news was RAIN! I love it, “Weather Alert” in a red rotating banner. They had live coverage with reporters driving the local roads reporting on what seems to be one biggest stories of the day.

Well, we are Seattleites after all so what’s a little rain right? We donned our rain gear and braved whatever adventure (3. a bold, usually risky undertaking; hazardous action of uncertain outcome.) would come our way. Interesting side note, two years ago Deby and I rode 16,000 miles to Patagonia and I only put my rain gear on one time, for a short shower that only lasted about an hour. Deby decided to chance it without rain gear and as usual she was right, we didn’t really need it. The drumming rain out the window convinced us both that we better put on every bit of Goretex we brought since we would be in for a wet one.

Here is a picture from the gas station in front of the hotel, my thermometer said 40 degrees F.

According to my GPS I-40 east from Kingman started at 3500 feet and the interstate startes climbing from there. We merged onto the 70 mph super slab between semi-trucks and associated spray and joined the fun on our unprotected motorcycles. As we gained elevation the temperature started dropping. At 40 degrees a light starts flashing on my dashboard indicating possible ice conditions. At 34 degrees with over 4,000 feet in elevation it starts snowing. I was counting the miles before our turnoff to the south on US 93 where I hoped we would descend and the snow would turn back into rain. In our helmet to helmet communicators Deby and I were actually laughing at the craziness of what we were doing. We had been to our destination, Tucson, around 10 years ago on motorcycles and we were discussing in our helmets what was worse, the blistering 100 degree heat we had then or this rain and cold.

Here is a picture from the second gas stop: 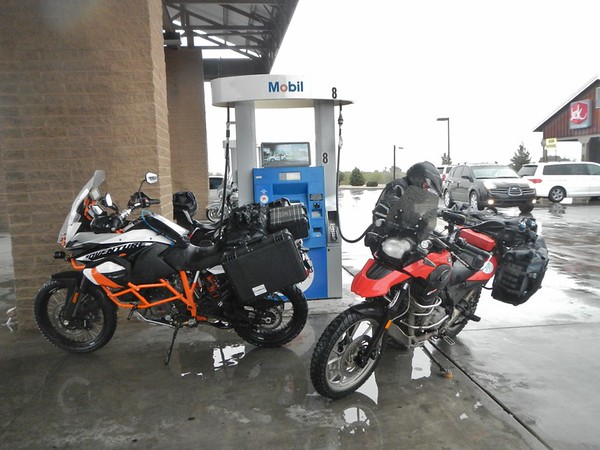 We went inside for some warm coffee and someone took our picture. 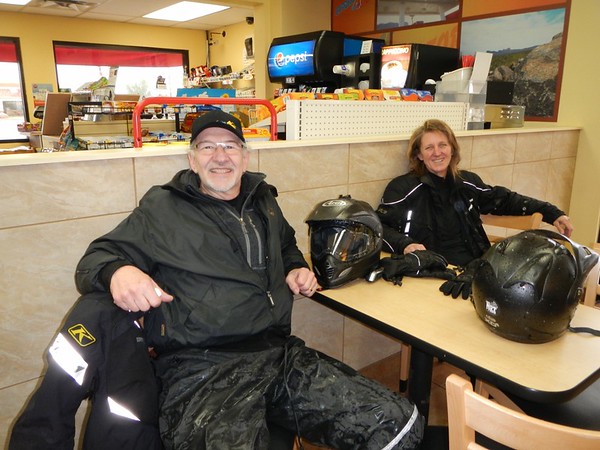 We were laughing because the whole thing was just too crazy. At this gas stop we met a half dozen Harley riders who didn’t look as happy as us. They were riding from LA to Florida for Daytona Bike Week and were hoping to ride 1000 miles a day and get there in time for the rally. They seemed to have decent rain gear but the open face helmets didn’t protect them from the stinging rain pellets. We chatted about rain, bikes and routes and they left before I was sufficiently caffeinated and ready to go.

I have to make a small confession here…. our motivation to press on in the driving rain and cold was our destination in Tucson, a 4 star Marriott resort. We’ve stayed there before and it has become one of our favorite destinations. It is super indulgent and luxurious. Somehow over the course business travel with stays in the Marriott system I had enough points for a nearly free stay, how cool was that?

We arrived on the mountain side resort in a driving hailstorm and parked right in front, next to the Valet-only parking stand. Deby and I walked into the elegant lobby looking like a couple of drowned rats, which we were. Literally, we left a significant trail of water on the elegantly polished floor leading to the reception desk.

Our original plan was to leave the next day for Mexico but neither of us thought we would be anywhere nearly dried out enough so I asked for another night which we got and I even had enough points to cover the stay. Oh yea! Adding the extra night took some time at the reception desk and the dripping continued off both of us until we had a significant puddle under our feet making for a dangerously slippery condition. As we walked to the elevator we saw housekeeping arriving with mops and a “danger wet floor” sign. Perfect.

We had a small “gear explosion” in the room.

So are we having an Adventure? No, we didn’t ride offroad climbing a boulder strewn mountain on a single wide track but we did survive relentless rain, cold, wind and even some snow. We tested our bikes, gear and fortitude. Our reward? Two nights at a 4 star resort. Tomorrow we cross into Mexico at the Nogalas crossing, a place of some notoriety………hopefully, not too much adventure.

Thanks for following and we love the comments even if we can’t answer them all we read each one, they make our day.