Deby and I were checking in at the front desk of the Best Western in El Centro, Las Mochas, once again, two dirty, tired, ratty looking bikers in a more upscale hotel lobby. The 20 something receptionist was very friendly and in reasonable English asked  us where we were from. When I said Seattle she turned beat red and turned to the young man next to her and asked him something in Spanish. He looked at her and then us and said in halting English “Fifty Shades of Grey”. She turned to us, still red in the face and said “….yes I know Seattle, famous movie….”. To funny, Deby and I burst out laughing, we said most people know us from the movie Sleepless in Seattle. They looked at us with blank stares, oh well.

I suppose that was better than the man at the reception desk in Tepic, when we mentioned Seattle he said he knew of Seattle’s reputation of having a very bad police force. He had a point given the problems over the last few years but I tried to tell him the city is working on it. It’s always amazing the impressions people have of Seattle, true or false.

We stopped for lunch on the way at a small roadside restaurant on the edge of a small town when a huge semi truck that was obviously newer from a large transport company stopped just outside the door. Very quickly a young woman ran out from the kitchen with a 5 gallon jug and a large diameter hose and within 45 seconds filled the jug with diesel fuel siphoned from the truck. I probably wasn’t supposed to see that but my chair was in the perfect angle with the door and the truck. Interesting, maybe the trucker is related? Just want’s free food? Something else? Who knows. Life in Mexico.

The KTM limped along and we made it to San Miguel, another long day at 349 miles. There is a lengthy discussion on ADVrider.com (click here if you are interested) on KTM fuel problems. Evidently anybody who knows anything about KTMs would never travel far without an extra set of fuel filters and even an extra fuel pump. How’s that for a great bike? I did find that if I kept the tank pretty full and didn’t exceed 4,000 RPM it would keep running. I was a little dismayed when I pulled into a Pemex and the engine died and the dash computer was flashing “fuel pump failure”.

Here is a picture of the casa we are renting in San Miguel.

Casa Gaudi, crazy huh? At least it was easy to find… Our host Steve let us into the bat cave where we had excellent secure parking.

Here are a couple of pictures on the inside. Below is the shower.

Here is the kitchen. 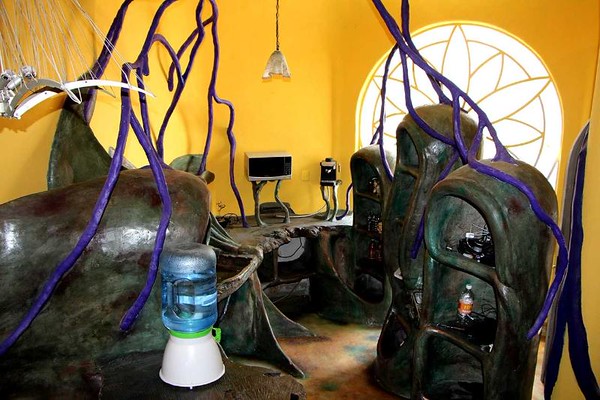 Desk where I’m sitting at this moment writing this

Yes, a little different but fun in a certain way…..

Part of the deal in renting Casa Gaudi was the use if a brand new Italika quad. We unloaded the bikes and Steve told us about a once a month art walk that was going on in town and would we like to follow him over. He was riding a cool 1964 Chinese military motorcycle with a sidecar that was a copy of a BMW R75, complete with machine gun mount. Sure… why not, so after a beer we followed Steve down the crazy highway and cobblestone roads in into town as the sun was setting.

All the ex-pats were there, and their was plenty of cool art. The place was huge with dozens of galleries all one indoor complex that used to house the town textile factory. This machine was still there. 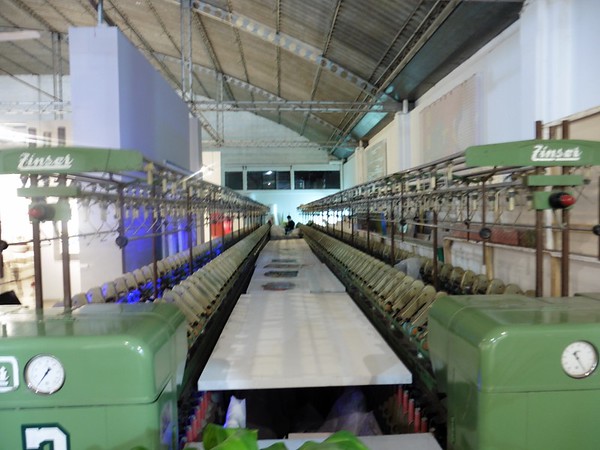 We didn’t make it through half before it was getting late and they started shutting down. Since we hadn’t had any food since lunch we stopped to eat before riding the quad back in complete darkness. 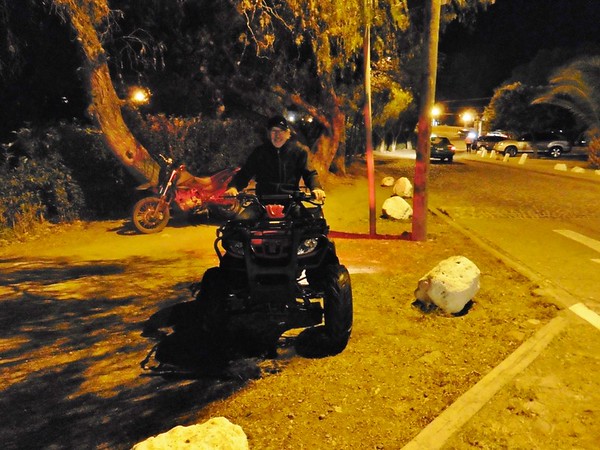 Steve gave us some vague directions back so off we went bouncing over the cobblestone roads dodging crazy cars, motorcycles, quads and pedestrians. All a normal part of Mexico….. we made it.

Back at Casa Gaudi there was an e-mail from our friend Art Bone, did we want to meet him in the morning and ride with him and a friend to watch a international rally race in a nearby town. Sure! It’s an international event that has racers from all over the world LINK HERE.

Deby and I met Art some years ago at one of the International Norton Owners Association rallys. Art is a Norton aficionado, past INOA president and now full time resident in San Miguel where he runs the local Motoclassico motorcycle club. We had a fantastic time riding with Art last summer to and from the INOA Oregon rally.

The trek to the races ended up being an all day event which was perfectly fine, we had a wonderful time talking about motorcycles and travel with Art and his friend Carleton.

Hung out with the locals 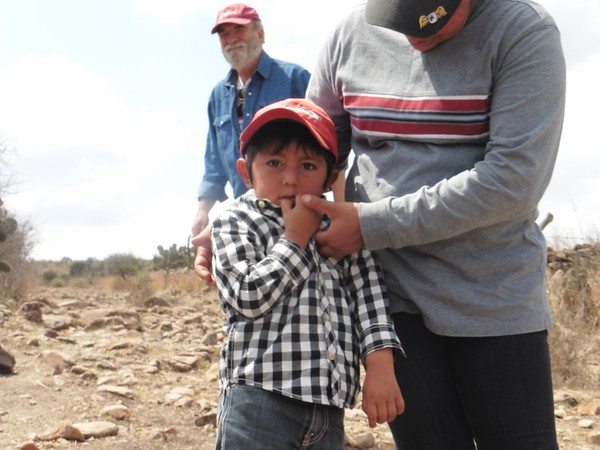 Typical road to the race site 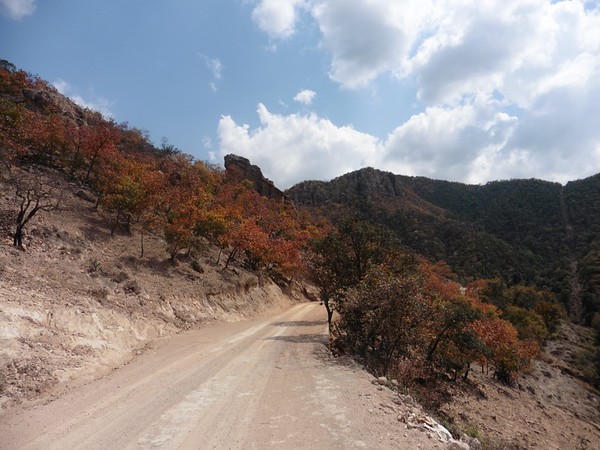 On the way back we stopped in Santa Rosa for lunch

It was Sunday so all the locals were out 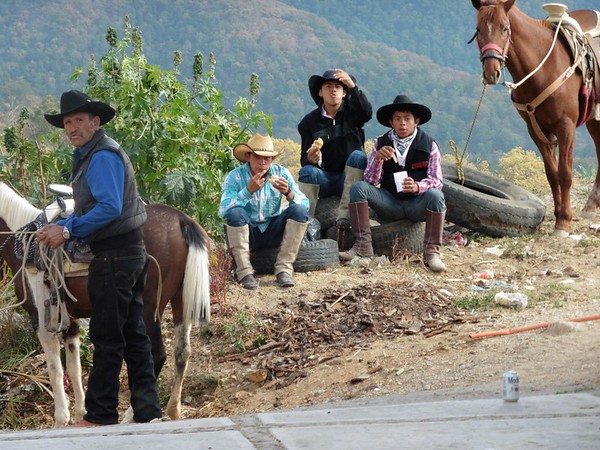 Every town has beautiful churches 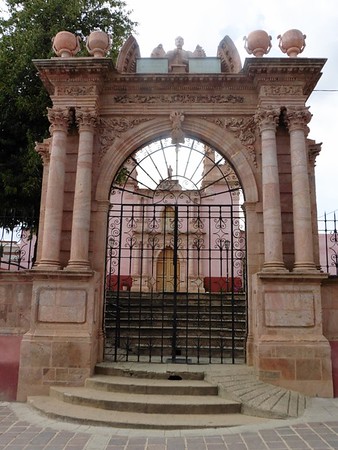 After lunch we stopped at a local cemetery

There was a mosaic representation of the local mountain range leading to a giant hat that was the grave of some local famous person, Art told me the story but I can’t exactly recall it. 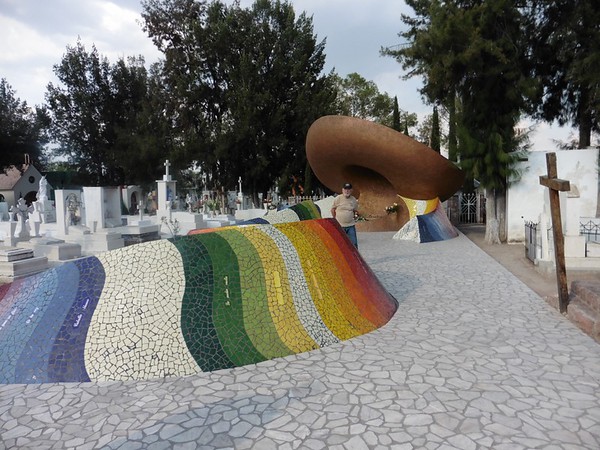 If you stand in just the right spot it looks like I’m wearing the hat. A local “guide” gave me the shaw to wear.

Eventually we returned to San Miguel and stopped at Art’s casa to check out his motorcycle shop. Wow, very impressive. Here is one of his garages 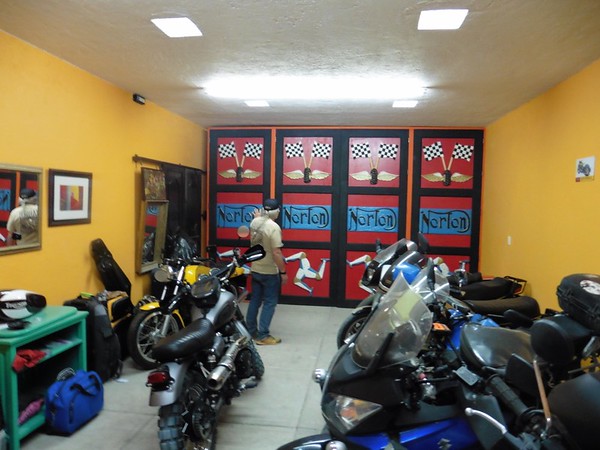 His actual shop is in a building a short distance away. Talk about shop envy…. 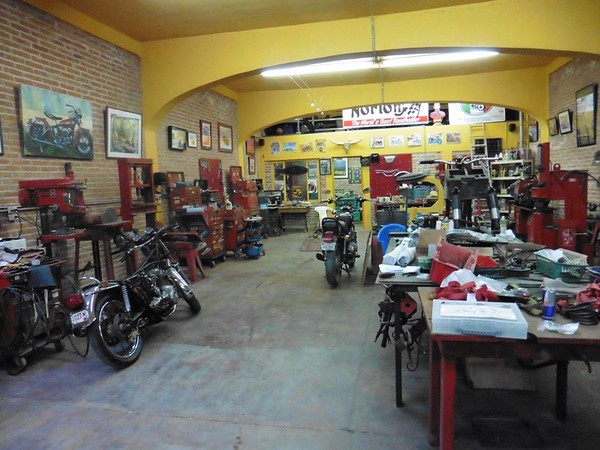 Wow, what a fantastic day with Art and Carleton, thanks guys for the fun. Here is a great picture of them I stole from Art’s Facebook page. Art is on the right.

So what about my sick KTM? Monday morning for kicks I went online and found out there was a dealer only about 30 miles away, go figure. Deby and I rode over and dropped off the bike and returned two up on the trusty BMW. More to come on that.

Sort of a long post but I wanted to catch up, hope you enjoyed it.