You may remember when we were stuck in the city of Patzcuaro waiting for the rain to reside that I mentioned we meet a couple from California. We were sitting at a sidewalk cafe and they were walking by. We exchanged a few words and didn’t think much of it. A few days later Deby and I were at an out of the way restaurant in Guanajuato when the same couple sat at the table next to us. Amazed at seeing each other again we talked and found out we were staying in the same hotel,…. small world. The next day was Deby’s birthday so I told them we would be having a bottle of wine on the rooftop deck if they wanted to join us so Thursday night our new friends Jeanie and Bo (hope I spelled that right) joined us with wine and a small birthday cake. We had a blast drinking and laughing until at about midnight when the security guy came up and told us we were too loud and someone complained. Ha! Busted for partying too late and loud, how about that for old age! 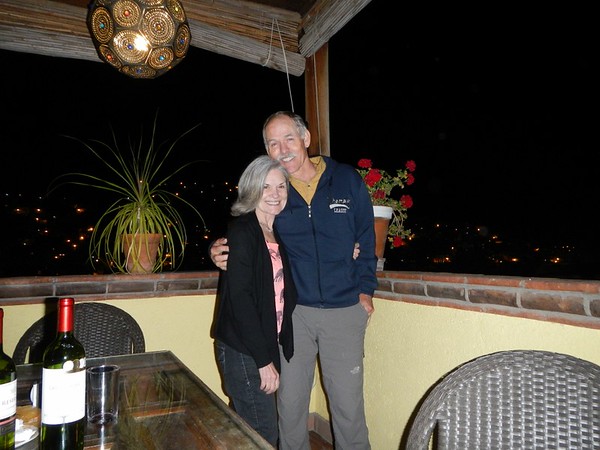 Bo and Jeannie were travelling Mexico by bus which sounded like a great way to travel.

We ended the day wrapping up a fantastic birthday, thanks guys.

The next morning it was time to leave Guanajuato, we had a fantastic time and the city is on my list of places to visit again. Did I mention that I counted the stairs to our room? Did I mention that there was exactly 100 stairs? Do you remember that since we have a rule not to leave anything on the bikes we haul around a bunch of luggage?

Here is our pile of stuff that needed to get dragged up and down 100 stairs. 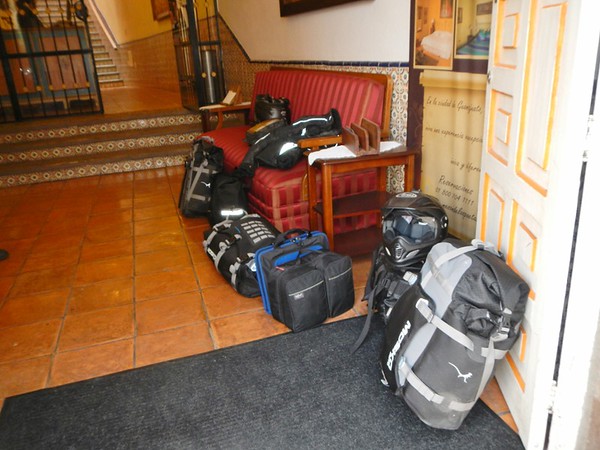 Do you know how heavy bags of rocks and copper can be?

Here is a short video of the trip up and down the stairs at the El Meson de Poetas hotel. I think it’s worth watching, the place was like a Hogwarts maze with hallways and stairs everywhere, there were at least three ways to get to our room. Needless to say we had the doorman help us with our bags and we were very generous with our tipping.

The motorcycles ended up being parked about a half mile away in a secure(?) parking lot. Here is a picture. 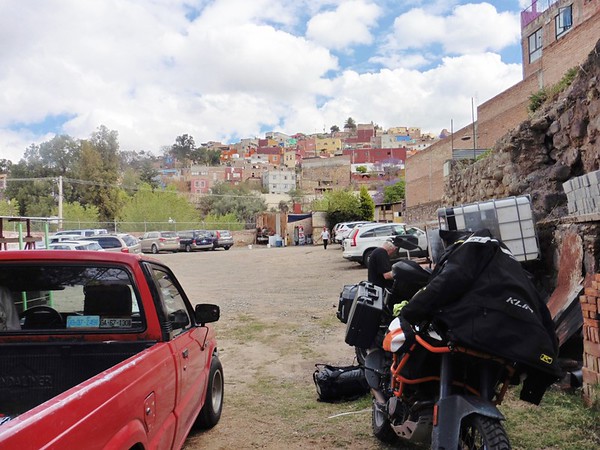 We decided it was easier to take a cab with all our stuff than negotiating the tight streets back to the hotel. When we got back to the bikes everything seemed ok but we soon found that when I (my fault) locked the forks on Deby’s bike I inadvertently set the locking ignition switch on the position that locks the forks and leaves the tail light on…. the battery was dead.

Good thing I now carry one of these things to jump a battery, it worked great. Microstart XP1.

Eventually, on our way we wanted to visit a giant art deco Christo Rey statue built in 1944 on the top of a road a ways outside of town. The cobblestone road weaved up this hillside for about 10 miles.

We were not disappointed, it was pretty cool and worth the detour.

There was a slight commercial aspect to the place but mostly it was a church and convent on top of this remote mountain.

You can read a little more about it HERE.

After spending some time walking about we walked back to the bikes and there was a car with the hood up and the guy was walking around with jumper cables looking for someone to help him out. Ah Ha! Microstart to the rescue. The shaggy, smelly gringo whipped out this little magic box and performed a miracle on his car at this holy site.  A small crowd gathered to witness the feat and were suitably impressed. Good deed for the day…. done.

With that we bumped back down the hill and continued our 212 mile trek to Zacatecas a historic mining and colonial town in the hills. We didn’t really have an exact plan or place to stay so in our usual fashion we programmed my GPS for El Central and then we would look for a hotel. We were wandering the confusing, twisty, cobblestone roads working our way into the city when a guy on a scooter catches us and yells to Deby in English, “…are you lost? Do you need help?” Huh? Well, we were sort of lost and I suppose we could use some help so we pulled to the side of the road to see what this was about. That is when we met Fredrico (sorry again if I have the spelling wrong). He said he knew of a hotel and if we followed him he would lead us there but first he would take us on a tour of his town which he was very proud of. After wandering the streets of Zacateca for a while he guided us to the Hotel Meson de la Merced. A great place with underground parking. We were just getting checked in when four additional guys pulled in on BMW 650 GS bikes. They were from California and every year spend a few weeks in Mexico exploring the back roads. Fredrico who himself owned a big dual sport, a Honda African Twin, was excited to get to know us all and talk about motorcycles and motorcycle travel. He knew a restaurant we just had to go to so we arranged the time and and met for the long trek in the rain to his favorite place.

I have to say Zacateca is a beautiful city. Many of the buildings are built with a pink color stone and at night they are all illuminated. Here are a couple of pictures walking to the restaurant. 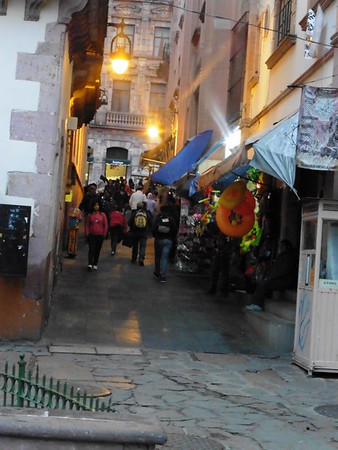 We had a fantastic meal and over beers and food the seven of us made quite a spectacle of ourselves carrying on in boisterous English in the crowded establishment.

Eventually we made our way back to the hotel on the crowded streets, it was late which made for another night without a blog post, sleep seemed more important. The next day we were headed for Durango, in preparation to ride Espinazo del diablo (Devil’s Spine) which is listed as one of the most dangerous roads in the world. You can read about it here on dangerousroads.org (Espinazo del diablo)

3 thoughts on “The People We Meet”