Oklahoma is a long state on the TAT, probably 600 miles or so. Our first night in OK was at Snowdale State Park, just across the border and probably 45 minutes from Tulsa. We had a great morning ride and stopped for breakfast at this place,

We rode up a place called Rock Mountain (Deby would have loved it) and took a picture here.

As usual Weston and Jon were well ahead of me so I came around a corner and found Weston standing in the road with his shirt up.

Glad this guy didn’t want to chase us.

The whole day was great riding, fast dirt through hilly wooded country. Had to go around two “Road Closed” gates but the road went through ok. One road said Dead End but we went anyhow and wow, a car couldn’t have made it. We rode about a half mile downhill through what must have been a dried creek bed. Good practice for the Colorado section to come.

Setup a nice campsite at Snowdale State park when we see someone coming in pushing an adventure motorcycle. It’s our friend Bryn from the TAT Shak. He got a flat tire just outside the park and was pushing it in so we camped for a second night together and we helped remove the tire and identified the smallest finishing nail that caused the problem.

The campground had a number of Ducks that lived there and liked to visit.

The black one was a Muscovy duck, interesting.

We shared the food in our pack for a community dinner, nice. 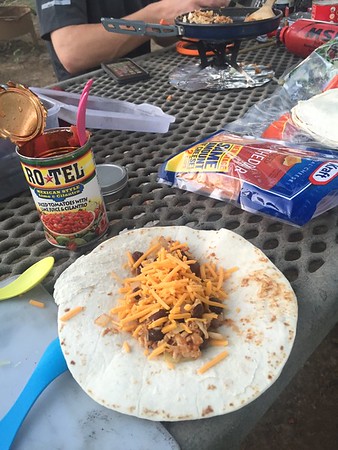 Even had a wonderful sunset.

The next day Ted from the campground (Bubba) told us about “an old guy” down the road that had “some kind of motorcycle shop.” Typical, turn left, turn right, left at old gas station and big brown shed on right. Ha, eventually we found it and met Eldon.

Eldon not only had a tube for Bryn, but had some brand new D606 tires for the KTM’s, wow. This was a deal too good to pass up so I bought his last inventory of these tires and decided to spend the morning getting them on. Eldon’s deal was that he could put tires on and off the rims but I had to take the wheels off the bikes, something about insurance I found out. No worries, he let me in his shop and let me use his tools.

It was an amazing shop, probably one of everything if you could find it. 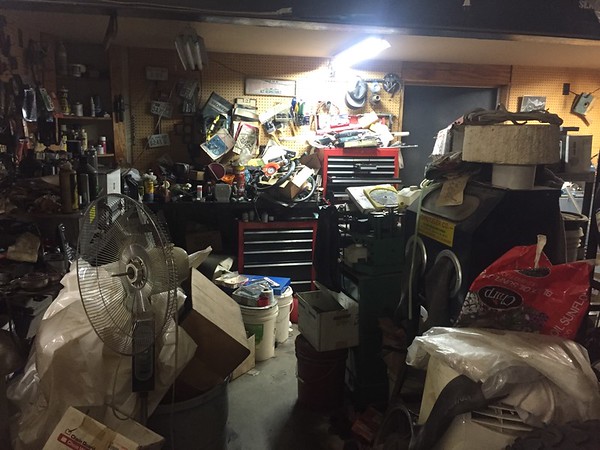 Although, go figure, he didn’t have an SAE Allen wrench for the wheel weight.

It was about 2:00 when we finally got going with new tires on the KTMs and off we were on fast gravel roads with the temperature climbing into the 90’s we were determined to make up for lost time when. 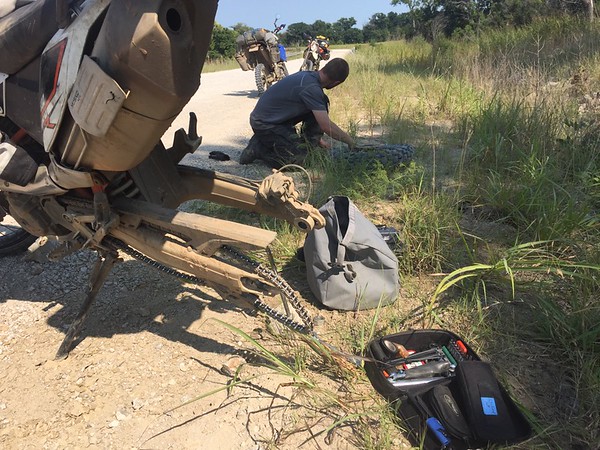 Jon picks up a nail 50 miles down the road from a new tube and tire. Well, no worries, popped off the wheel for the second time in the day and slapped in a new tube.

So Jon got the first flat award. 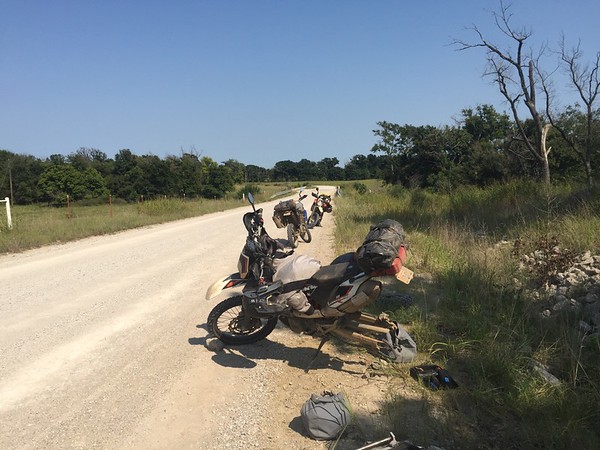 I didn’t take any more pictures on Tuesday just blasted on roads like you see above. We found a nice camp site in Copan, OK on Copan lake. We were hot and tired but managed a fire in the fire pit and had a good night. Another day in the books. 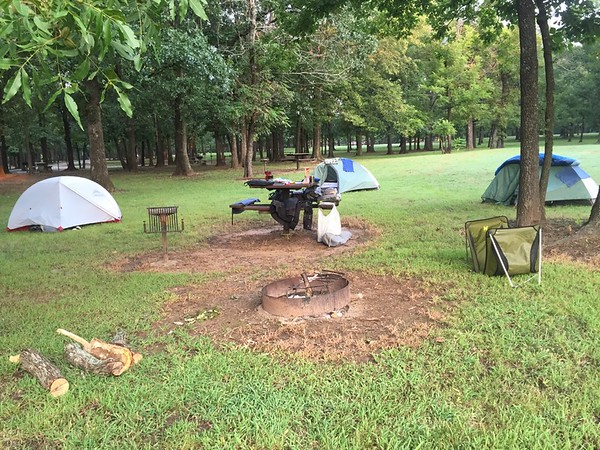 Decided to break into the pancake supplies Deby made for us, yum. Light and fluffy brown, the finest in the town. 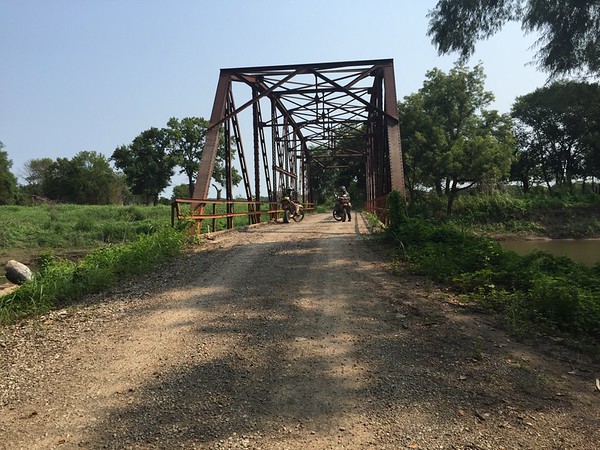 The rest of the day was HOT and dusty.

Says “feels like 130” wow, yes it did. We stopped in the afternoon at a Mexican restaurant just to cool off before recharging our evaporative cooling vests and getting back on the road. We ended up at Alabaster Caverns State Park just outside of Freedom, OK. We were told by the ranger that it was the only Alabaster Cavern in the world. The have daily tours but we wanted to get an early start to beat the heat. I called Deby and she was jealous and asked us to find her some Alabaster. Hmmm.

We woke up and were determined to get most of the way through OK. First we had to make a stop along the road….. 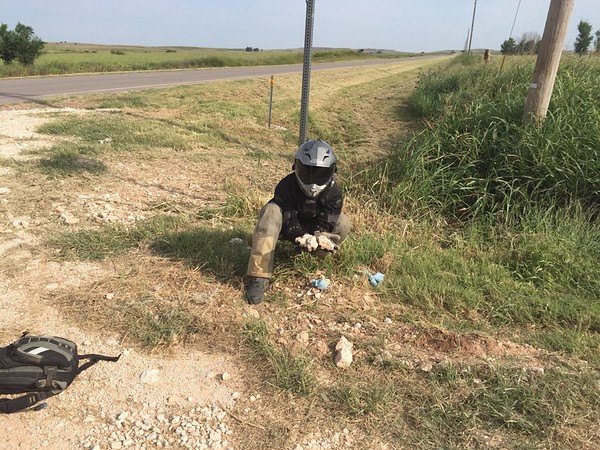 Ha, Alabaster just laying about. That Weston, what a good kid Deby.

We were on the road early and it was back to HOT, dusty, long straight roads. I had the poor WR pinned all day (really ALL day) trying to keep up with the 690s. We were flying 50 to 60 MPH all day. There were long stretches of deep sand that we just hit at speed and kept going. There was loose gravel, ruts more sand and lots of dust. It was HOT again so all the dust and dirt stuck to our pores. It was a rough day.

Around noon we needed gas and the nearest place was in here of all places. 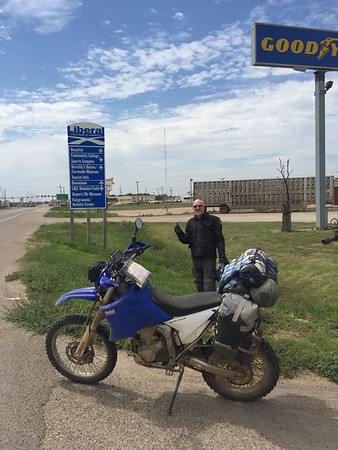 Liberal KS! Holy cow. When I was in my early 20’s and toured with a rock band this was one of our stops. Ha. I asked an old timer (someone my age) at a gas station about Naomi’s Lounge and the woman laughed. Yes, she remembered it and used to go there about that time. We told some funny stories and she said it was still there but called The Hitching Post. Well I had to check it out.

Liberal’s #1 Honky Tonk. Well, it sure was back then.

Some of the roads were these two track sandy stretches.

Some sections with ruts. 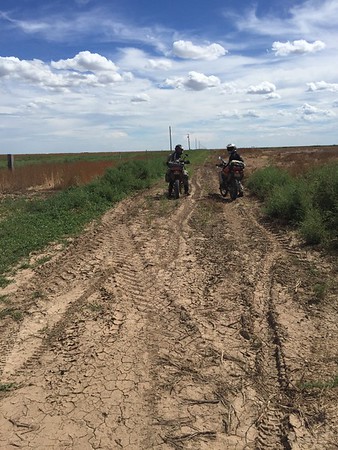 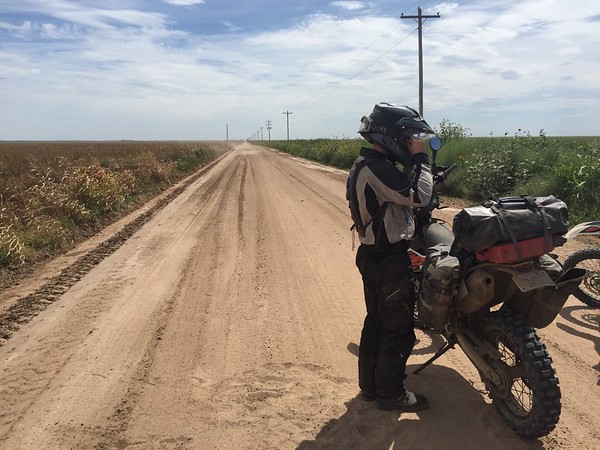 We found that campgrounds are not really common so we have been using a campground App to identify campgrounds along our path. According to the APP, there was one in Felt, OK, just 15 miles from the border in the panhandle. We got there as it was starting to get dark and were looking forward to a good nights rest. Felt, OK is really small, I mean really small. Maybe 20 buildings in the middle of nowhere but they have this little park. When we arrive we saw this sign.

Oh Oh. Day Use Only. Ah Hmmm, seriously there was not another campground for maybe 100 miles much less a tree to camp under. Soooooo, what to do.

We setup behind a row of low trees and hoped for the best. Turned out we were ok, the town is so small only about three cars passed the whole time we were there.

Finally we exited the OK state, were we glad. As soon as we crossed the state line into the corner of New Mexico the terrain changed and the surroundings changed from agriculture to ranching. The roads and weather improved along with our spirits.

We came across this old prison in Branson, NM

We decided to have an early night in Trinidad State Park near Trinidad, CO. The phone app said showers and laundry. This time it was right.

It’s getting dark as I type this at the picnic table and the skiters are getting me so no proof reading today. I hope you enjoy the ride so far.