Oh yea. The challenge of riding the Trans American Trail is not just the ride it’s negotiating the weather and the logistics of camping every night which includes finding food, water and camping places. Tonight’s our third night camping and we are hoping it might be the first night without rain. The forecast says we might be dry but my weather app shows a line of thunder storms heading for us. At least it hasn’t been too hot with temps in the 80s but high humidity.

I’ve had good luck uploading pictures right from my phone so let me get caught up.

Day one riding was mostly paved with some gravel sections and four water crossings. There were only supposed to be three but somehow with all the rain we ended up with four. I only seemed to get one good pictures. I have some good video of Weston almost crashing but he pulled it through. 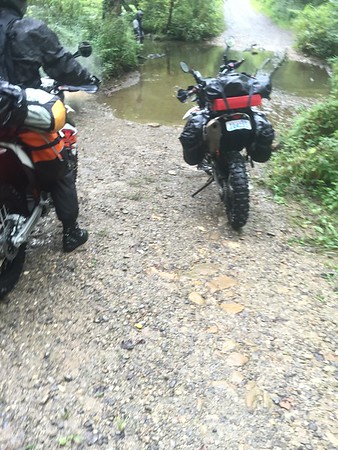 One interesting thing was going over a 5,200 foot pass in fog so thick we could hardly see. I had no idea anything was so high in Tennessee.

Night one Jon and Weston were successful gathering wet wood and managing to get a good fire lit while I prepared dinner. As soon as the fire really took the rains poured down and promptly doused it. 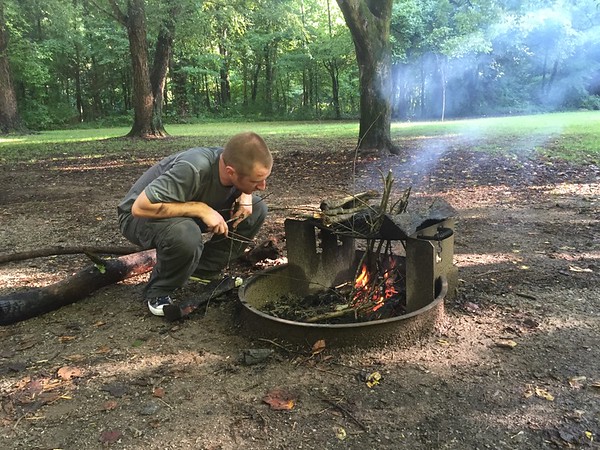 It was a pretty good camp site before the floods started.

We learned a valuable lesson, avoid setting up your tent in the low spots. Jon had a water bed after just one half hour. 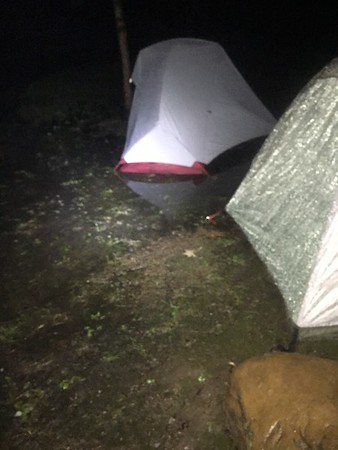 The rain let up slightly and we all moved our tents to higher ground.

Wednesday it threatened rain all day so we rode with our rain gear on. It didn’t start raining until we stopped to set up camp. I didn’t take any pictures since it was mostly paved roads but really nice curvy ones. We stopped for lunch but not dinner, it was getting late and huge rain clouds were forming so we went for the nearest campground on google maps. After a 10 mile detour we arrived outside Elkmont, at the Mill Creek Park RV park. Welcoming us were many signs that said, Private Park, No Trespassing, No camping. Basically, not very welcoming. By this time the rain was starting and as far as we could tell it was about 20 miles to the next campground. On each sign was a phone number so we decided to stop in the long driveway and call. “No, we don’t take campers, you have to go to…..” I couldn’t make out what she said so I asked her to repeat. She asked where we were and I told her at the end of her driveway, cold, wet and on motorcycles. “Well….. ok, come on down”. They ended up being nice enough but you could tell they were wary, they sort of apologized and said if we were from the south we would understand. Hmmm, I wanted to have her explain but decided I would rather get our tents setup instead. The directed us far from the RV spots, Weston thought he heard her say so they wouldn’t see us. Didn’t matter we set up our tents as the rain started coming down stronger.

Notice the shed in the background. We ended up hanging out there during the rain, literally. 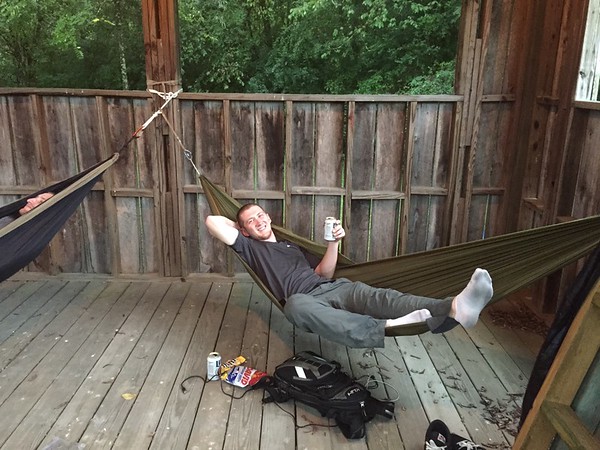 We couldn’t find a place to buy any food but managed to find a 6 pack of beer. That, some chewy bars, sunflower seeds and candy was our dinner.

You can’t tell in this picture but it was raining pretty hard. This shed was way better than spending all evening in our tents.

The next morning the rain let up enough to make coffee in the shed and get the bikes packed. We even managed to get hot showers. Once the bikes were packed and we were about to leave the sky opened up in torrents of rain. We took shelter in the club house, wish they would have mentioned this to us the night before.

Waiting out the rain.

We had coffee but no food for breakfast but we were anxious to get going so we decided to try to ride through the storm.

We managed to stay only sort of dry as no rain gear is 100 percent perfect. Even if it was humidity and sweat started soaking us from the inside.

By noon it mostly stopped raining so we stopped at a Stucky’s restaurant and caught the end of their buffet breakfast. The food was horrendous but we were so hungry it didn’t matter even if we were a little ill feeling as we rode off.

The afternoon has some great gravel sections and more water crossings. We successfully navigated three roads with closed signs. I particularly liked this sign.

The bridge wasn’t really out just not ready for cars. 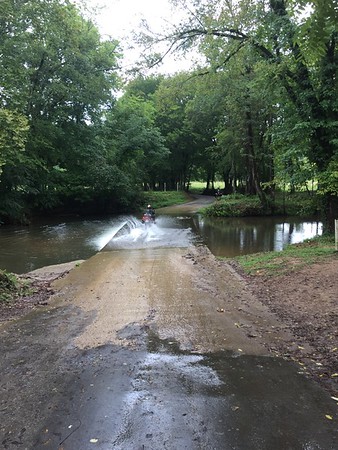 This was a good one. 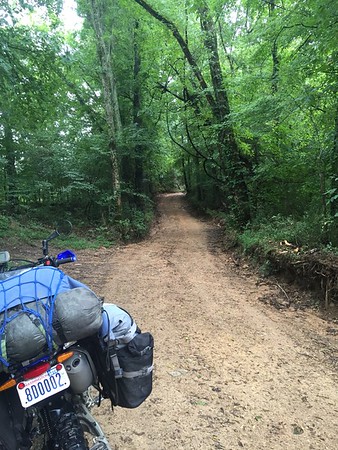 I’ve read about this in other TAT ride reports but I’m still amazed, there are cemeteries everywhere, it seems like every church has one and there are A LOT of churches. All of the cemeteries are full of bright flowers that look brand new. This picture does not do it justice. 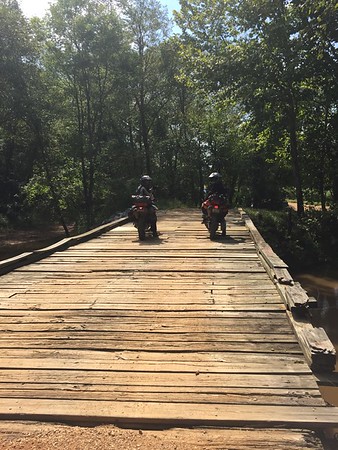 Eventually we crossed into Mississippi and are camping tonight at the Cross City RV Park outside of Corinth, MS. We met the owner Jim Wilkinson who recently opened the park. He wasn’t aware it is exactly on the Trans American Trial. Nice place, it looks like we will have warm showers again in the morning. We stopped at a Dollar General to pick up some food, bad idea. Everything was very expired and we just couldn’t find anything so we rode a few more miles and came across a WalMart where we got the fixens for hamburgers.

So day three is in the bag. We are starting to dry out and are looking for some good riding tomorrow.

Be sure to go to the Follow Us tab above to see where we are in real time.

Thanks for following. Donn, Jon, Weston.

3 thoughts on “Riding in the Rain”