Deby called me a week or so ago and there was a small window of days that would work for a surprise visit on September first if we would be near a big city. She had to coordinate schedules with Jon and Weston’s girlfriends but it might just work out for the three of them to visit. I guesstimated we would be in Colorado about then so I suggested they book a flight to Denver, rent a car and follow my SPOT tracker to our location. We also decided to keep the trip a secret from the boys. Salida, Colorado was the closest city on the TAT to Denver so I worked on a plan to slow down the ride to get the timing to work out. The roads in eastern Colorado were fun but still too fast so we were making too good of time. I came up with an excuse that Deby was sending a care package to Salida and it wouldn’t arrive until Tuesday. We arrived in Salida Sunday night so I declared a day of rest on Monday. We ended up camping in a KOA that was actually pretty good and we took full advantage of the laundry, shower facility and free WiFi.

On the way we came across this sigh, Weston liked it.

Eastern Colorado had some long great roads heading into the mountains. 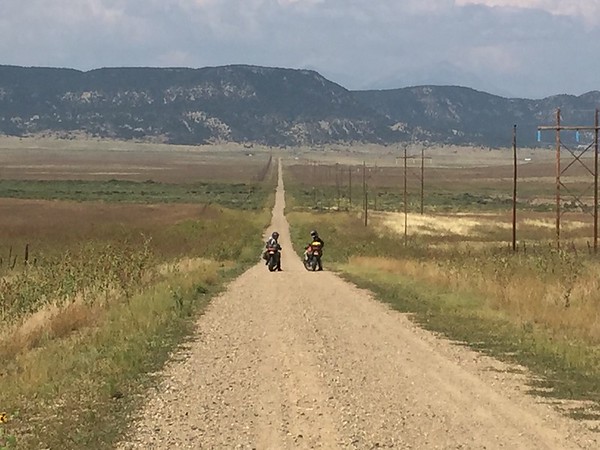 We stopped to check out this cool old church along the road.

On Sunday 8/30 we found a great free campsite at the DeWeese reservoir. The best we could tell camping was allowed anywhere around the lake. There were a number of people with campers who were there for the fishing. 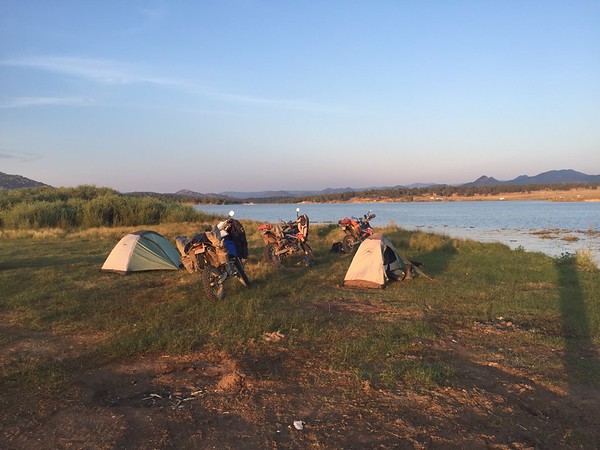 After the sun set a huge full moon rose over the mountains in the distance.

During the night we heard all kinds of wildlife, which might be expected camping in a wildlife refuge. Something woke Weston up and I heard him yelling at a big raccoon that was on the seat of my motorcycle feasting on a can of Pringles I had strapped to my top sack. I got out of my tent to shoo away the camp thief and took time to secure all our provisions. For the rest of the night I could hear the raccoons sniffing around my tent.

When I woke up I discovered we must have camped in a cow pasture. 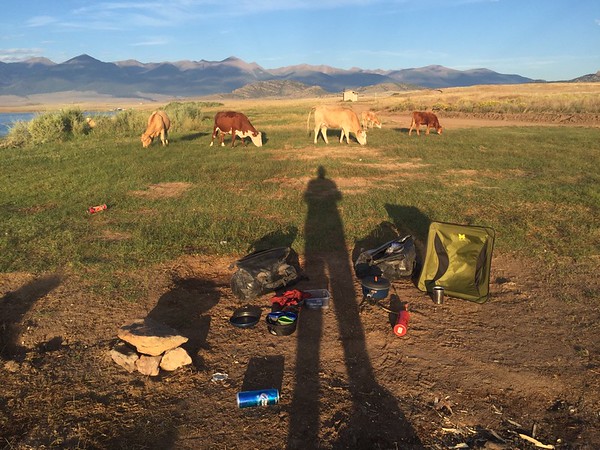 The loud chewing is what actually woke me up. The cows didn’t seem to interested in the raccoon’s discarded Pringles can. 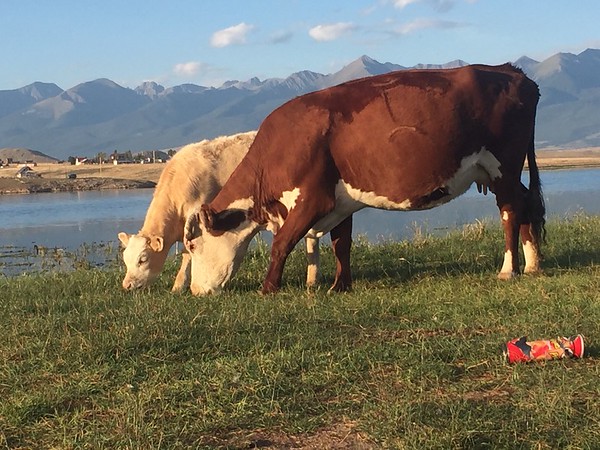 Soon it was back on the road and some fantastic views into Salida.

One thing we noticed as we gained elevation was the nights were getting much cooler. Jon and Weston opted for light weight sleeping bags that were great for the beginning of the trip but were obviously not suitable for the send half. We made a stop at a local camping supply store.

Up on a top shelve on clearance was two 10 degree bags for about $40 each, deal.

Sunday night we opted to ride a few miles north of Salida to the KOA where we booked two nights while waiting for our “package.” It was cheaper for us to get a group site since they only allow two tents per tent site. This worked out great since we got a shade structure and a large spot.

Monday was a free day so of all  crazy things (for me) Weston wanted to take Jon and I golfing! Heck, why not? Jon had never played before and I used to years ago when it was partially required for a previous job.

We had a blast.

Besides golf we hung out at the local brewery, watched movies in the KOA club house, did laundry and I borrowed a book from the lending library. It was nice to have a day off the bikes.

Tuesday was the big day. The girl’s plane was landing at 10:00 and it was about a 3 hour drive from Denver to Salida so I was expecting them to show up about 1:00. Checkout time at the KOA was 11:00 so we had a slow morning of coffee, pancakes and hot showers before we left promptly at 11:10. We found out there was a Yamaha shop near the campground that opened at noon, I needed an oil change and wanted to inspect my sparkplug so we killed an hour at the local coffee shop. While there we struck up a conversation with a guy in his 70’s about motorcycles. After the usual questions about our motorcycles and the TAT he slowly told us about himself. His name was Bruce Brown (not the same as the director of “On Any Sunday”) and he had actually raced the Baja 1000 and 500 multiple times! He was friends with Malcom Smith and had some great stories. We had a great time hanging out and chatting, I wish I would have got a picture.

Still sort of killing time but needing an oil change we got to the Yamaha store shortly after they opened. It was a small one man operation and the guy behind the counter was on the phone constantly, and treated us with the typical dismissive attitude that is sadly typical in many motorcycle shops. Clearly he wouldn’t have time for an oil change to I talked him into letting my use a drain pan and we found a shady spot next to the shop to do it ourselves. I had the oil, filter and spark plug changed in less than a half hour.

We were just buttoning everything up when a black car tore into the gravel parking lot with three hot babes. Horn honking and gravel flying as they skidded to a stop. Weston looked up an said “what the heck?” The three girls jumped out and the TAT riders were reunited with their women.

I declared a pause from the official TAT and that it would be ok not to camp for two nights since we had reservations at the Mountain Goat Lodge a few miles down the road towards Salida.

We spend the day Wednesday kayaking the Arkansas river having fun.

When we got to the end of the river we had to deflate the kayaks and strap them to the top of the rental car. A fun day for all.

Today we say goodbye and resume the TAT, back to camping, camp food and mountain roads. Everyone says the best part of the TAT is just beginning, I can’t wait. It’s been great having a couple of days off with Deby, she wishes she was riding along but is being very gracious and understand about the father and sons experience.

3 thoughts on “The big Surprise!”