What TAT ride report would be complete without a picture like this…….

The official diagnosis is a displaced fracture on the tibia, Jon has a broken leg……..

Of course we didn’t know that as we prepared our bikes for the last day riding the TAT. The forecast was for a beautiful northwest day, sunny and mild temperatures near 70. To make the day even more perfect the three of us unloaded most of our luggage into the trailer so we could ride the last day with lightweight motorcycles.

Did we really carry this much stuff? 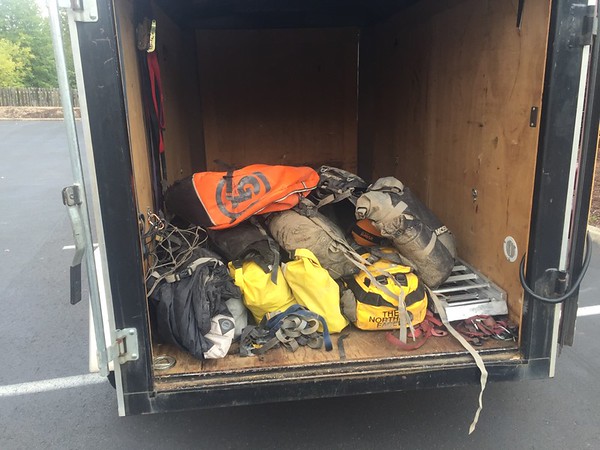 We rode back to the small town of Tiller so we could pick up the TAT trail where we left off. We were extremely proud that except for trying to follow the track onto a road that didn’t exist we had managed to ride nearly every inch of Sam’s tracks. We learned many of the riders we met use Sam’s tracks as a guideline but pick and choose their route. We considered doing that but decided that wouldn’t be riding  the TAT, just traversing the country on some mostly dirt roads. It was the official TAT for us.

A short way out of Tiller we came across this guy.

The road was closed due to a forest fire. He was really nice, even posing for a picture but firm that we weren’t allowed down NF3201. He even got out a map and helped us plot an  alternate route. The route chopped off about 6 miles from the TAT, acceptable considering how far we had gone without a detour.

The roads and riding were fantastic, we were enjoying the lightened bikes and beautiful weather. At one point the track took a turn and suddenly we were going up a steep rocky slope.

Pictures just never show how steep these sections can be. Notice Weston standing in the trail? Look close, is that Jon to the right of him?

Technically I wouldn’t call this a crash, he was literally bouncing up the hill when a rock sent him into the brush. He didn’t tip.

I stopped on the steep slope below, it was so steep my brakes wouldn’t hold the bike, the locked wheels started skidding backwards. Yikes, I managed to turn the bike sideways in the “road” to stop the slide but I couldn’t get off the bike to help Jon. I took this picture behind me to show where we had come up and almost slid back down.

Fortunately Weston had a stopping point and was able to help Jon pull his bike out.

The rest of the ride was rather uneventful and quite enjoyable, I really want to come back and ride this section again since it’s so close to home. Here is a picture from a scenic part in the road. 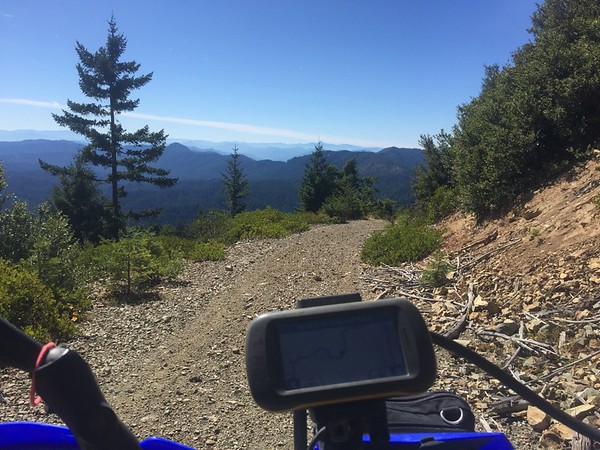 It felt great being back riding in the tall trees of the Pacific Northwest.

At one point we stopped to inspect Jon’s rear tire, the knobs were literally breaking off. I guess we got our moneys worth out of this one. 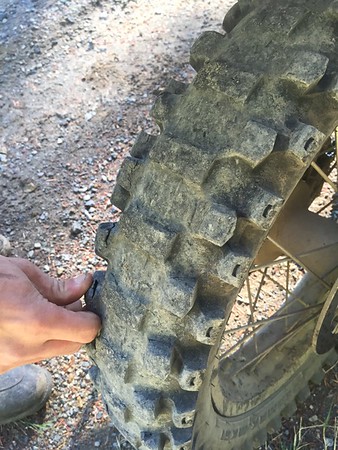 After 217 miles we arrived at our destination for the day, Port Orford, OR on the Pacific Ocean. Someone had this great idea that we should all jump for this picture. Broken leg and all. Woohoo! 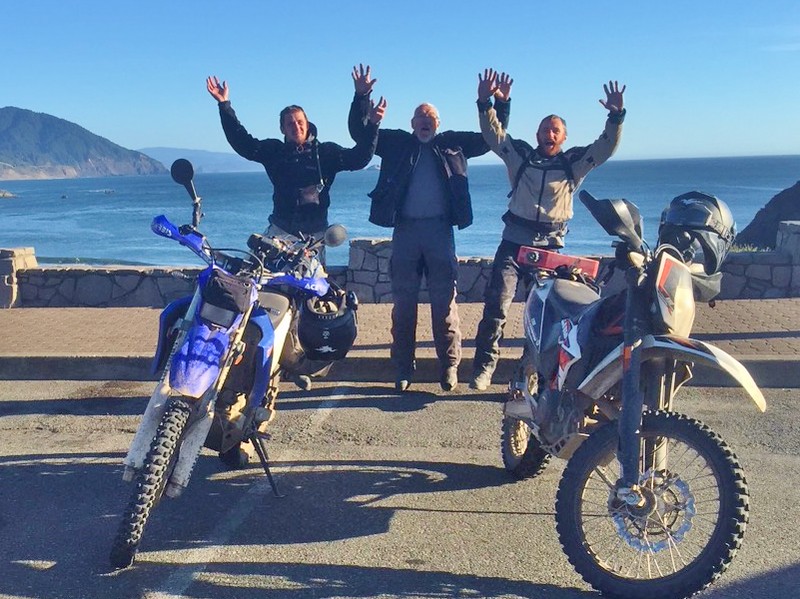 We were especially thankful to Deby, Uncle Richard and his brother Johnny for coming to get us.

So, we did it. By my records we travelled 5,582 miles in 5 weeks and a couple of days. We camped every night except the last two and two nights for a “break” with the girls in Salida, CO. That is a lot of camping.

Jon came back from the doctor today and they told him to wear this boot until he can see a specialist.

I dunno… looks like a motocross boot to me.

Pretty happy to be home.

Spent the day power washing the gear. Some of it may be salvageable.

Thanks again to everyone who encouraged us along the way through comments here, Facebook messages, Weston’s instigram and all the e-mails. We limped into Port Orford literally and figuratively but we made it. I’m sure this is a trip we will all remember for many years. Jon, thanks for having the dream and talking your aging dad and busy brother into doing it with you. Get well soon (and happy birthday).

4 thoughts on “We completed the Trans American Trail!”