The road out of the back side of Mike’s Sky Rancho heading West was tough right out of the parking lot.

We had heard that this was a rough road but it was something I always wanted to attempt and now, on the small bikes, I thought this was my best chance.

The scenery was beautiful and the weather cool and perfect for riding, thankfully because soon we were working up a sweat managing the bikes over the rutty, rocky road over the central mountain range. As far as we could see the trail continued over the hills. 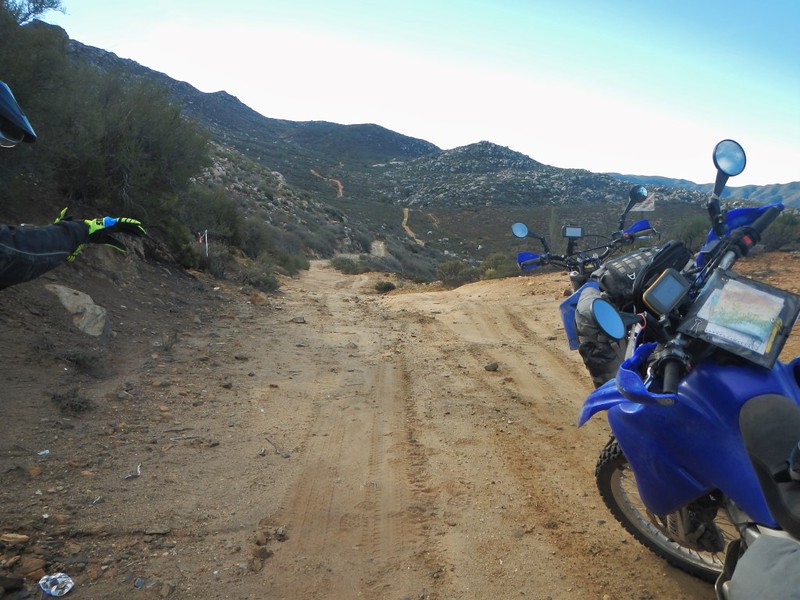 This section was tough but not as bad as some of the steep rocky uphill climbs over boulders and steps. I was too tired to get pictures of some of really bad stuff and in a few places Deby wisely, let me ride her bike over the worst of it. Deby did an amazing job with only a few slow tip overs. 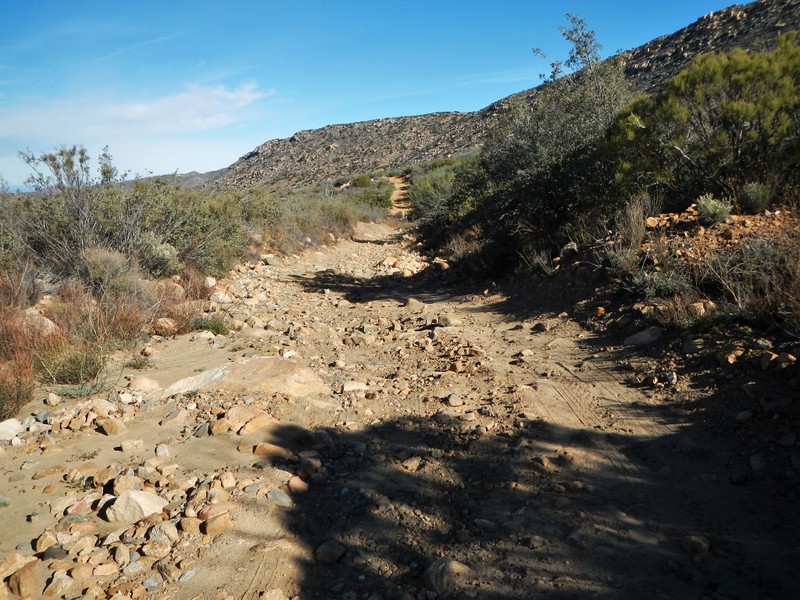 We stopped for frequent rest and water breaks and eventually made it over the mountains to an unexpected surprise…. a paved road. Our route eventually connected with the paved road going to the Observatory south of Mikes. The rest of the ride out to the main highway was as pleasant as the rocky road was a test of our skill and endurance.

By noon we crossed Mex 1 at San Telmo and continued West to the Pacific Ocean.

This section of the beach was lined with miles and miles of Mexican Landscaping rock, the same stuff Deby buys at the garden supply store for $25 a bag. This is where it all comes from – right here. 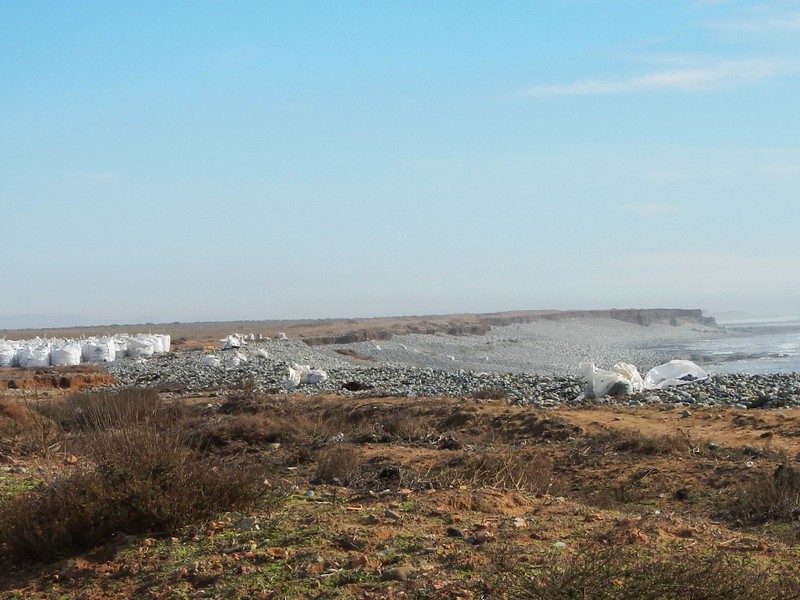 The whole way we saw Mexican laborers picking up these rocks and loading them into huge bags that were then picked up and eventually trucked to the US. Because of this commerce the road was in relatively decent shape. 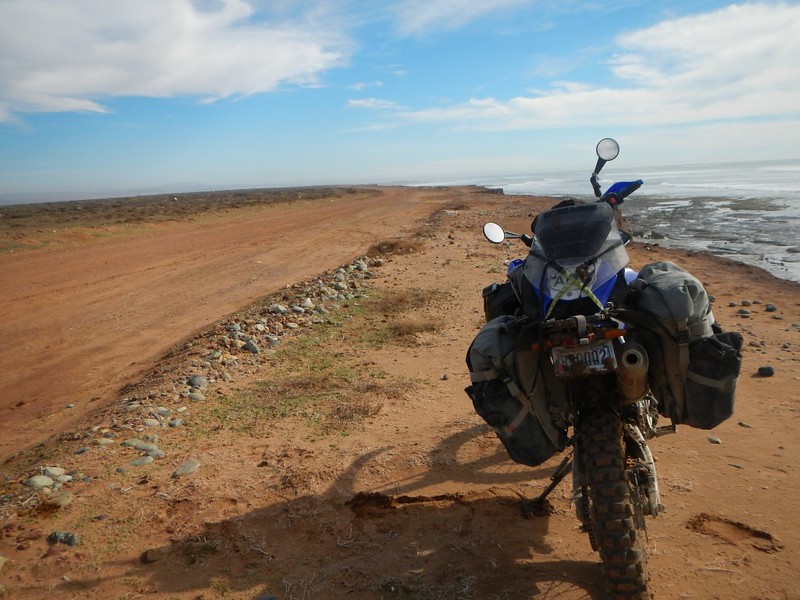 You might notice above that I have an extra windshield strapped on the back of my bike. No, I didn’t bring a spare, that windscreen used to be attached to Deby’s bike but was sacrificed to the rock gods on the back side of Mike’s.

The road was washed out in a few places, this one had a relatively easy go-around section. 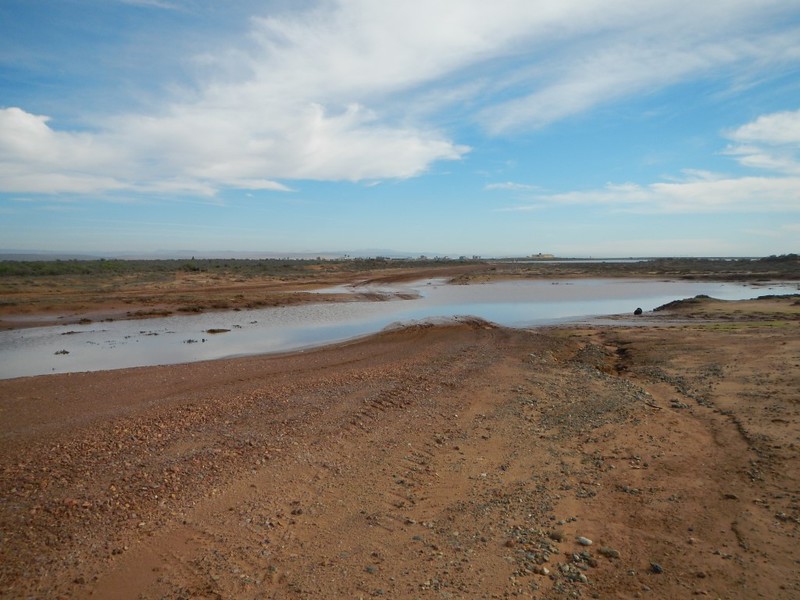 Eventually we came to this sign and decided we had enough for the day and took a detour back to the main highway.

Just as the early sun was going down we rolled into El Rosario in time for dinner at one of our favorite spots, Mama Esponoza’s cafe, famous stopover for the Baja 1000 racers.

Waking up the next day we declared Saturday and easy day and planned on riding pavement to the Bahia de los Angeles one of our regular stops. We had some offroad options but because of low fuel and general tiredness we stayed on the road.

Along the way we stopped at some giant cacti. 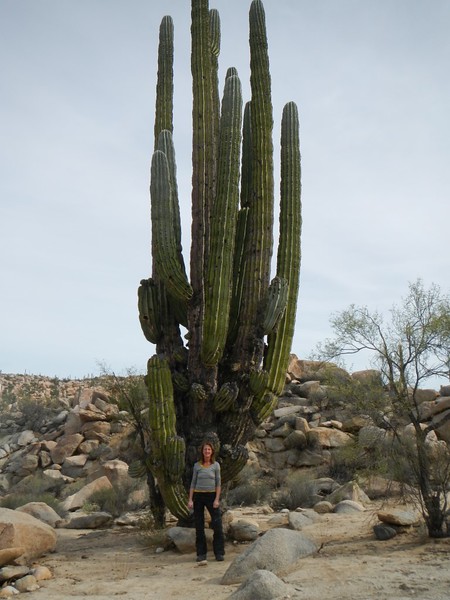 Had lots of fun stopping to admire the rock formations.

And then we came across a stop in the road with a picnic area and a short path to some really cool cave paintings, wow, the best ones I have ever seen. 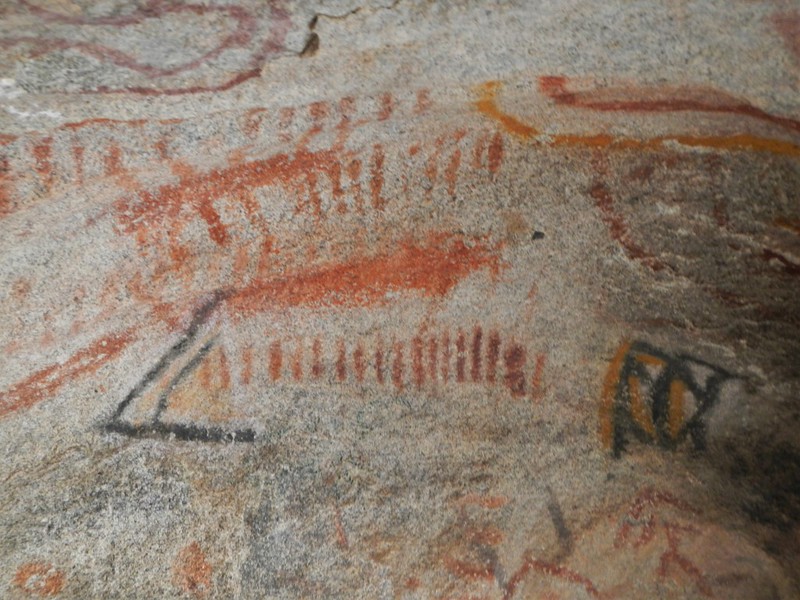 They were everywhere, really awesome.

We saw miles of these kind of cacti, I don’t know what they are called. For some reason we call them Dr. Seuss cactus.

After a very nice day riding and the bikes on fumes we made it to the Bay of LA as the gringos call it an our favorite hotel.

There is always a Great Dane here named Scooby. The old Scooby that used to greet us died so now we have Scooby Two! 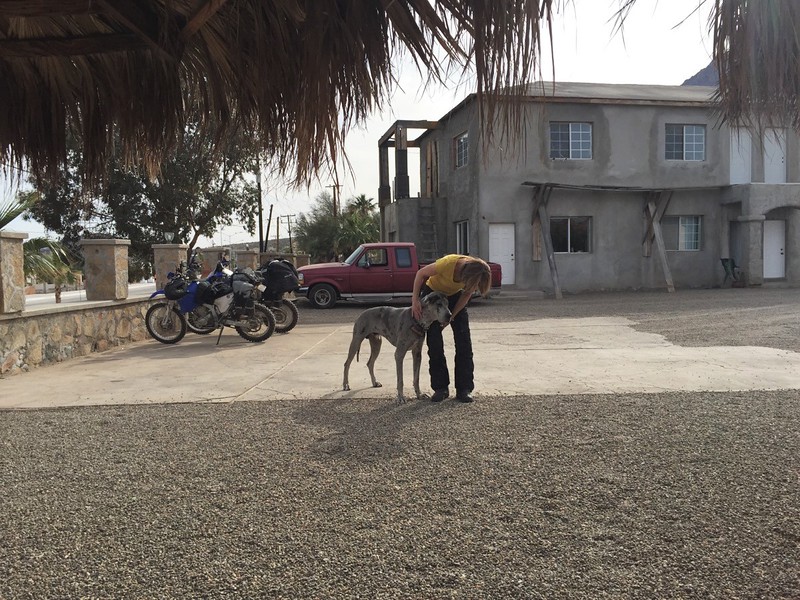 Scooby even visited our room for a snack, how did he know Deby was such a softie for dogs?

Ahhh, another great day in Baja. I can sense our pace is slowing down and we are finally getting to relax. We tuck in and get a good night’s rest for a day of offroad riding coming up. Stay tuned.