Our short stay in Loreto was um, interesting…

When we arrived well after dark, after a hard day of long riding in strong winds we immediately found our way to the hotel restaurant pausing only long enough to swap our smelly motocross boots for more comfortable shoes. Looking bedraggled and somewhat filthy we were led by the host to a table with white linens next to a window. In the center of the room was a long table with about a dozen patrons who were obviously some type of tour group. We didn’t pay much attention other than to notice that they all stopped their conversation and stared at us as we passed by. First order of business; BEER. It was one of those days….. by the time our server returned to take our order we needed more beer. It took a full two beers for the buzzing in our heads, ears, arms and legs to subside. High speeds, high winds and long miles take a toll on the body.

After some time we started to notice the group next to us and started wondering what kind of group it was. This is a little guessing game we play sometime at restaurants often resulting in hilarious stories and scenarios. At least in our minds. This group spoke English but I detected some accents, maybe European, they were all women of about the same age group, early 50’s?   I noticed none of them had any alcoholic drinks and at least the ones closest to us preferred tea. They were dressed nicely, probably more appropriate for this nice restaurant but maybe nicer than the average Mexican tourist?

After some speculation we concluded it was a church group on a missionary project, maybe feeding the orphans of Loreto. I thought about going over to say hello but decided not to which is a little unusual for me.

We went to bed and didn’t give it any thought. In the morning we were loading the bikes outside our room when I saw two of the women exiting from the room next to us. The one with what I thought was the European accent came over to ask about us and the motorcycles. That’s when we got the story.

This woman wasn’t from Europe, I was about to call it Norway when she said she was from northern Minnesota. Ha! I should have known. Yes is was a group but not a church group at all. It was a group from all over the country of Reiki masters. What is Reiki you may ask? This is from www.reiki.org.

Reiki is a Japanese technique for stress reduction and relaxation that also promotes healing. It is administered by “laying on hands” and is based on the idea that an unseen “life force energy” flows through us and is what causes us to be alive. If one’s “life force energy” is low, then we are more likely to get sick or feel stress, and if it is high, we are more capable of being happy and healthy.

Ok…. so, I suppose. I could probably use some Reiki, it might work better than beer after a long ride although I’m not sure. I might have missed my big chance to try it out.

Ok, I’m way off track here so I’ll leave the story there. We did run into them a few more times and almost, I mean, really almost, ended up in the same boat when we got to the bay.

By chance we ended up in another boat with some guys about our age and their wives. We got to talking to them and the conversation turned to motorcycles and our ride. I told them we were sort of pre-running GPSKevin’s tracks for his upcoming Baja ride in March. They busted out laughing… Kevin’s routes!!?? These guys ended up being good friends with Kevin and claim that Kevin was actually using routes that they gave him. So I suppose Deby and I were actually riding their routes. Small world.

Enough of the blah blah, how about some pictures?

On the way to San Ignacio the road passes alongside the beautiful Bahia Concepcion a popular place for camping on the remote and isolated beaches. We stopped at one for a break and short beach ride.

The water was beautiful and the beach pretty empty.

The next day we were off to see the whales. The wind was still strong that the whale watching boats were not leaving from the bay instead passengers were shuttled to a point near the mouth of the bay closer to the whales and reducing the boat ride by about 40 minutes. The road was insane! I only got one picture out of the car window.

All that salt water can’t be good for a car. We were flying about 50mph.

We did see some whales. These are 40 ton Gray whales. It’s calving season so many were with babies.

This one came under our boat and then sprayed us with it’s snot. 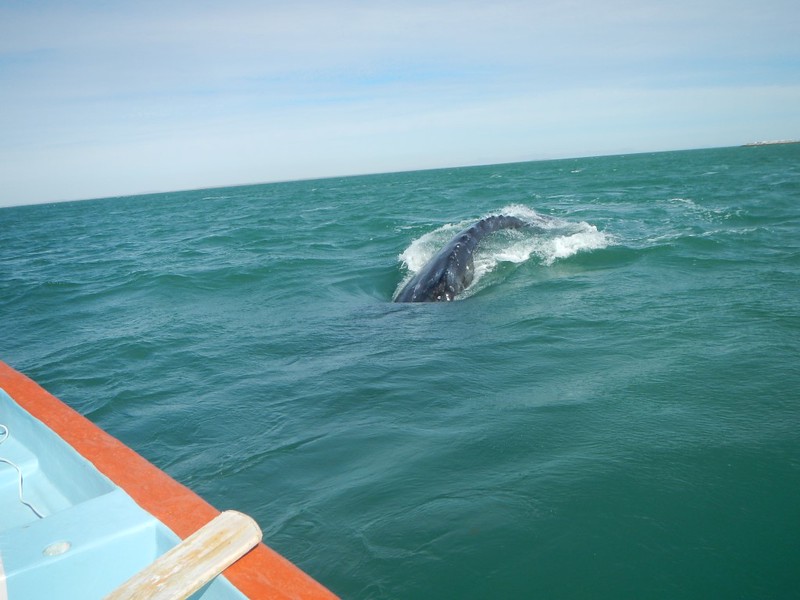 One of the other boats, I think this was some of the Reiki’s. Because of the strong winds there were only a few boats out, maybe four.

We had a great ride back to the resort from the bay, about an hour on a nice gravel road. I managed to get a good picture of this Osprey and nest.

We were stuck behind this guy for a while, not much room to pass.

When we arrived at the Yurts Deby checked her phone and saw a message from Arieta, the caregiver for Deby’s mom. The news was not good. We decided to get up early and ride hard and fast, were were about 500 miles from the border. It would be a test for us and the little WR250’s.

Sunday February 7th we rode 336 miles in continued high winds. Average moving speed 51.7mph with moving time of 6 and a half hours. The shortest and fastest route, especially on motorcycles is the gravel road past Coco’s Corner to Gonzaga Bay and then north to San Felipe. We had gone this route in 2011 and it was very challenging. Since then they are paving more and more of the road. We were amazed to find that now the road is graded the whole way and nearly ready for pavement, a little bit sad actually but it helped us make great time.

For those familiar with the area, here is the road south of Alfonsina’s. 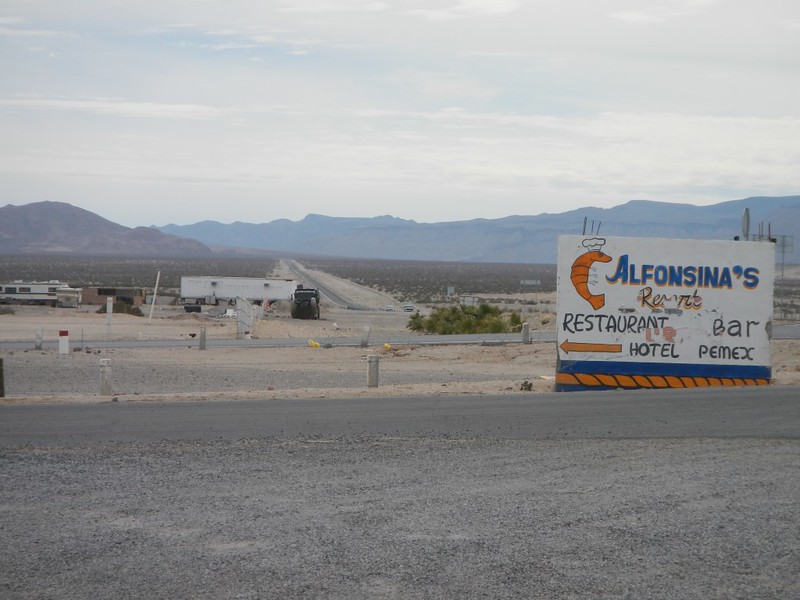 What used to be really challenging deep sand and gravel is paved as far as you can see.

We stopped at Coco’s Corner and were disappointed. Coco wasn’t there and everything was all cleaned up with a new concrete pad.

Even the campers he rents out were spiffed up.

I suppose with the new paved highway Coco’s will become a Harley stop, gone will be the wild dirtbike vagabond days.

One thing about this long stretch of road is the lack of gasolina stations. Fortunately we topped off at this stop along the road.

I calculated that would be enough to Gonzaga Bay where I knew there was a Pemex station. I forget it was Sunday…. the pumps were closed. Hmmm, what to do. We stopped at the pumps, took of our helmets and searched around for some chewy bars in our packs for lunch. With the end of the gravel behind us I pulled up my portable air pump and inflated the tires back to 32psi for high speed pavement travel. I was mentally calculating how much fuel we would need to San Felipe. How much fuel did we buy from the guy in the truck? How far had we gone before that? What kind of mileage did we probably get on the dirt section? That was a lot of mental math for my tired brain. I was about to conclude that we could make it when a pickup truck pulled up to the pump with a guy and a couple of kids. He asked if we needed gas, huh? Yea! Ok. He got a key out of his pocked and unlocked the pumps and filled up both bikes. Wow, he works there? Was just driving by? Happens to be a guy with a key? I didn’t really care, paid with cash and gave him a good tip. How about that… off to San Felipe, full speed ahead.

We arrived at San Felipe late in the afternoon exhausted and tired. As usual we found our way to the bar/restaurant and walked in just as the Superbowl was starting on the big screen TV. We ate and had a few beers but only made it to halftime before giving up and going to our room and calling it a night.

This is the last picture I took. 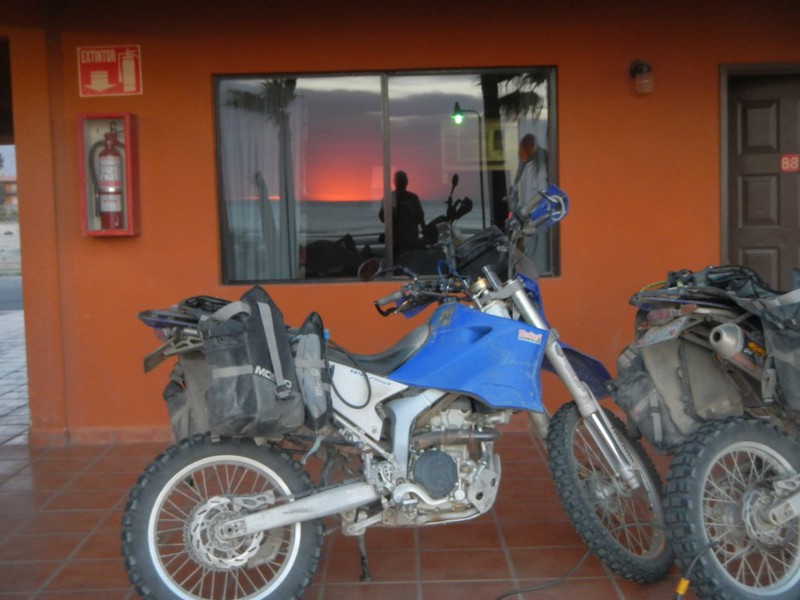 We were up early and the sunrise was reflecting in the hotel window. I thought it made a nice picture with the bikes in the foreground.

After 150 miles of blasting in relentless high wind on Mex 5 and again on Mex 2 we crossed the border at Tecate at almost exactly high noon.

From there it was a short ride to my friends house where the truck was stored. We were offered a place to stay for the night but we decided to push on towards home. Smart? We left San Diego about 2:00 to go north on I-5 through Los Angeles. We timed it perfectly getting stuck in LA rush hour and slogging every inch of I-5 south to north through La La Land. (Note: Jock and Eric – soooo much thanks for the care package of food for the drive north. It was our only sustenance all the way through LA, we might not have made it without your help.)

We arrived home Tuesday evening after putting in a 1,000 mile day in the truck. Deby was able to spend a few last days with her mother which was really nice.

So, that concludes another Donn and Deby Adv ride. What’s next? Hard to say. We’ve been kicking around some ideas both short and long. We would like to get back to South America, maybe soon but we’ll see.

Thanks to everyone for following the blog. It’s fun to write even though I don’t claim to be a writer. Keeping this blog helps me organize our travels in my mind and makes a good reference for me. Deby and I appreciate the comments and encouragement here and on Deby’s Facebook account, it’s really fun to see who likes to follow our adventures. I hope we can encourage others to travel to some of these places, it is possible and doable on just about any type of motorcycle. I try to be specific enough with cities, routes and hotels that this blog can be a reference for anyone interested.

Your friends, Donn and Deby

6 thoughts on “Home after long days on small bikes”