It feels good to be back onto the blog. A million thanks to everyone for all their well wishes. Now – let’s see how this ride wraps up!

On Saturday we decided we had enough luxury at the  La Concha Beach Club and decided to ride south towards Los Barriles for a landing spot while we made a much anticipated stop to visit my buddy Doug. 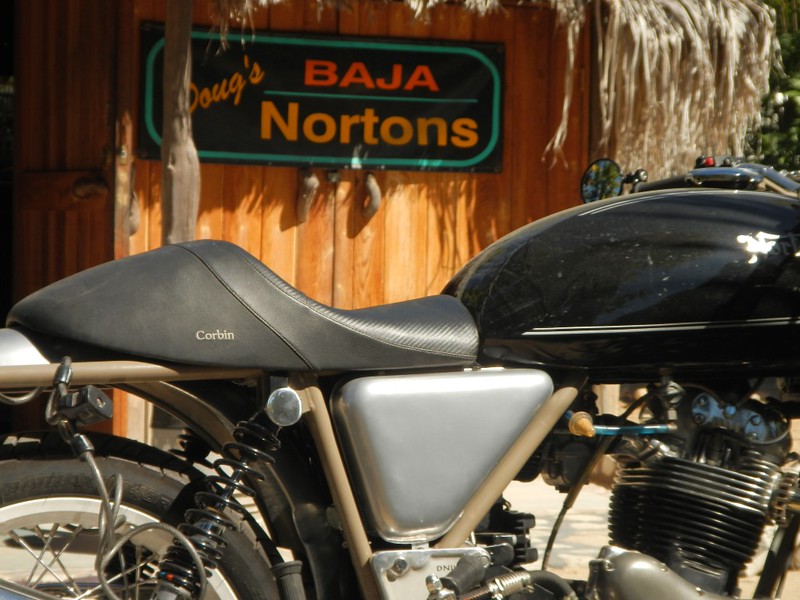 Doug is the proprietor of Doug’s Baja Nortons in the small town of Aqua Caliente about 40 miles from Los Barriles. Doug moved to Baja from Colorado some years ago and now makes it his home where he restores and builds custom Norton motorcycles. Deby and I first met Doug in January of 2012 on our first trip riding motorcycles south of the border. (For a blast from the past check out the ride report on ADVrider Here) Since then we have connected with Doug at the International Norton Owners Rallys and every time we ride to Baja. 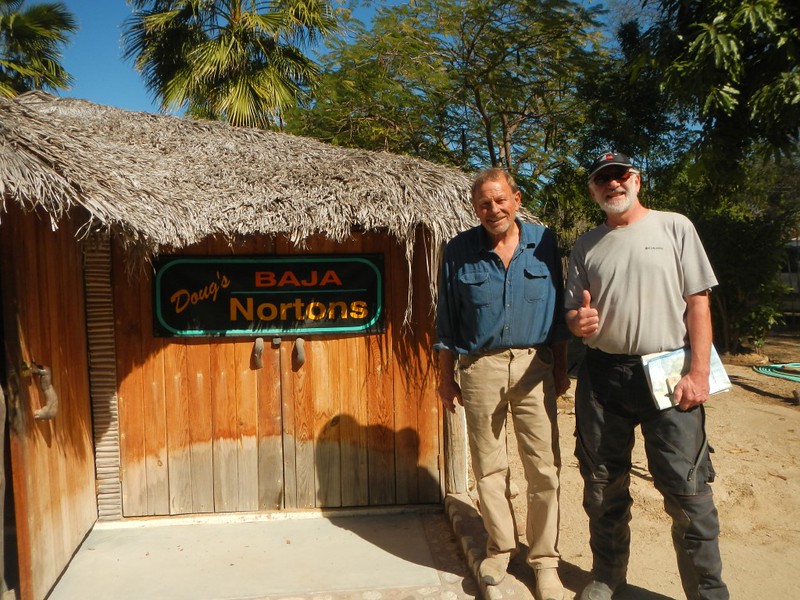 Doug and I spent time in his shop reviewing his latest projects while Deby and Isabel, another Colorado transplant, hung out in the outside bar/kitchen. Doug recently bought a hearse for hauling motorcycles and is getting it ready for the INOA rally this summer. On the bottom of the door it says, “Heaven can wait – gotta ride this Norton.” Always great to see Doug. Check out his web page here: http://dougsbajanortons.com

We managed an extra day in Los Barriles anticipating a long day of offroad riding south towards Cabo.

There are two roads out of the city, one along the beach – literally – ON the beach and the other on the pavement. Of course we started on the beach. 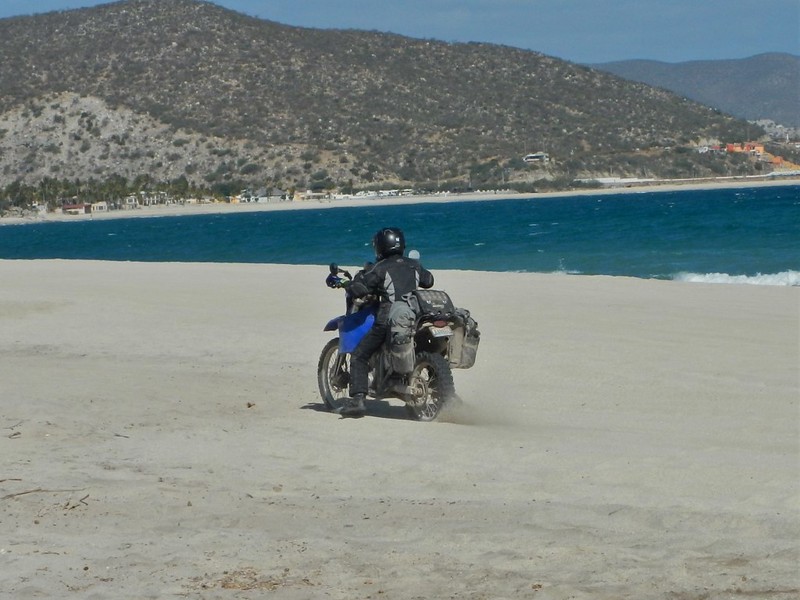 As loaded down as we were we started sinking rapidly as soon as the sand turned soft. Deby did a great job but the little 250s didn’t have enough power to get on top of the sand and power out. Worried about burning out clutch plates we turned back to the main road.

Fortunately, it wasn’t long before the pavement ended and we were treated to a nice graded road along the coast. 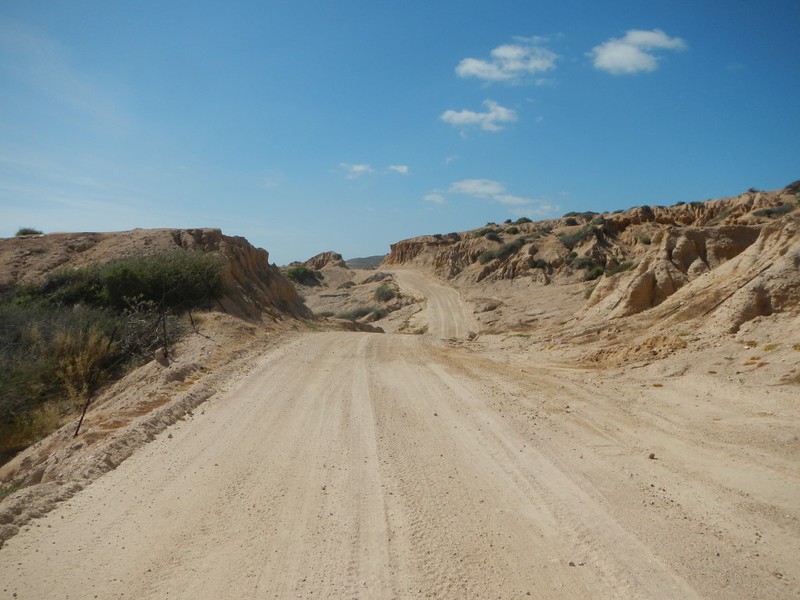 We had ridden part of this section once before on the big bikes and remember struggling in long sections of sand. “Road sand” is a lot different than “beach sand” since it’s usually not more than a few inches deep. The 250s were the perfect bikes for this and we easily traveled over what was a challenge on the big BMWs.

We stopped at a nice viewpoint over the Sea of Cortez and chatted up another motorcycle rider who took our picture. I wish I would have thought of taking pictures before we put our helmets back on….

This guy was pretty funny, he said he was retired in his 70’s and camping a few miles down the road. He was riding two up on a small 250cc Sherpa with a woman who looked to be his same age. He was wearing proper riding pants and jacket but decided sandals would be appropriate for his feet. His girlfriend had a shorty Harley style helmet  jeans and tennis shoes. He said he had been camping for a month in his motorhome and was ready to return to the US when he met this “babe” (his words) and is now spending a few more weeks. Ha, good for him.

The rest of the ride south to Cabo San Lucas along the east side of the cape was fantastic. I hope we can get back to do it again.

We got to Cabo in the middle of the day and had no desire to stay there among the touristas. Doug told me of a new toll road around the city so we ponied up a few pesos and jumped on what could have been a super highway in the United States. We were cruising about 70MPH when I remembered I still had the tires at 15psi for the sand, ooops. Fortunately the new heavy duty tubes I installed before we left held and we made record time to the city of Todos Santos on the Pacific side of the peninsula.

Todos Santos is a sort of touristy town full of art galleries about an hour north of Cabo San Lucas. Because of it’s proximity to the resort city they have daily tour buses visiting and the city is bustling during the day but just about closes up when the last tour bus leaves. We timed it perfectly arriving into town as the last bus left.

We decided to check out the Hotel California http://hotelcaliforniabaja.com. No, not that one but…… they went all out to market it as the hotel in the song. The song plays nonstop all day long in the gift shop, needless to say we didn’t spend much time buying anything.

While asking about a room with my really lousy, but improving, Spanish I think the young woman was impressed enough with my attempts at their language that she gave us a free upgrade to the penthouse suite. Sweet! Here is a picture from our room onto the deck. 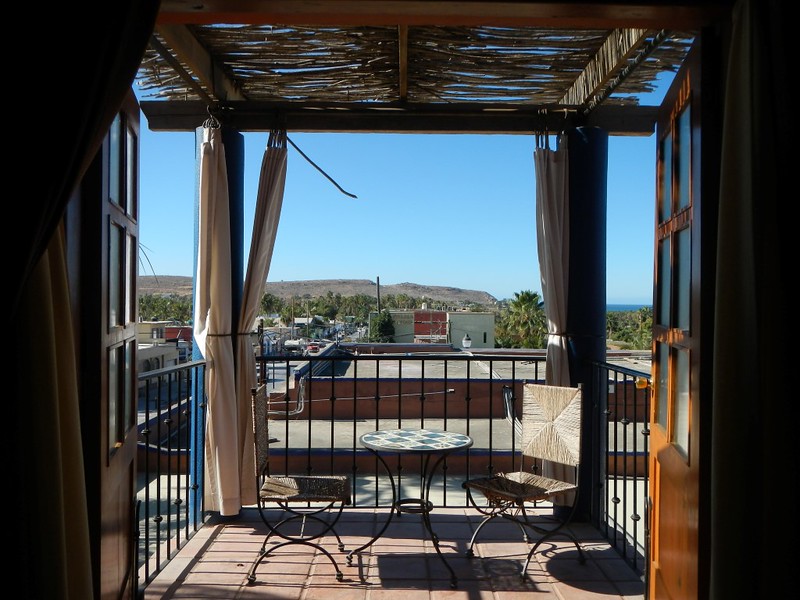 We settled in for a good night sleep, the plan for the next day was back east over the mountains on a track I had from GPS Kevin. Should be fun.

Here is a preview of the route…….

Thanks for following, more to come.

One thought on “The Southern Offroad Reaches”