Who says you have to be on some fancy pants adventure motorcycle to have an adventure ride? How about travelling over 2,000 miles on a vintage Norton Commando motorcycle? Deby and I are back from just such a ride, true grit riding on the most basic of motorcycles. Shift right (1 up 3 down) brake left (It doesn’t really work anyhow). Oh yea, KICK START. That’s right no wussie push button to start this man’s motorcycle. We had a saying back in the day, “If you can’t kick it, don’t ride it.” My daily aerobic exercise was the daily morning starting procedure. This went on for 10 days in a row. What a way to start the day. Suspension? Ha, on the ride home we were in blinding rain on National Forest Road 25 riding through the Gifford Pinchot National Forest and the mighty Norton nearly bucked me off the seat many times as I crashed through unseen potholes. I should have slowed down but what’s fun in that?

Here is a picture of the Norton in touring form. Side bags, top bag, touring screen and if you look close you can see the GPS mounted.

I even got in an actual road race with a Harley off the line at a light in Buckley. Wow did that bring back memories. Never in 30,000 miles of riding that very Norton had I ever lost a race to a hog, Norton’s were king back in the early 70’s. I didn’t know he actually wanted to race but I jumped off the line anyhow and pumped through 1st and 2nd gear. I didn’t see him anywhere (perhaps due to the lack of mirrors that are useful for anything other than being there for legal reasons) so I slowed a little and shifted to 3rd assuming he had backed off. Just then Deby yelled in my helmet radio that he was catching up! Really? Dang, I hit 3rd too soon as he was even and pulling away. I pinned the throttle the caught up and finally passed while shifting into 4th gear. I couldn’t even look at the speedometer because I was hanging on for dear life but I’m sure we were well above the speed limit in the city of Buckley.  Wow, it was a lot easier back in the day of shovel heads or pan head Harleys. I couldn’t tell for sure but I think it was a modern 88 or 95 cubic inch Harley. Still beat him 🙂  The Harley rider turned off with a huge smile and a big thumbs up. It was clear he understood the epic significance of what just occurred.  Ahhh, adventure with a capital “A” the old school way.

So how did get myself into a 2,000 mile ride, in the rain ending up in a race with a Harley? My decision to attend the 2016 International Norton Owners Association rally in Quincy California.

Early on a cold damp July day Deby and I met our group for the ride south. Two other Norton’s beside mine and a vintage 1974 Triumph. Deby was the smart one riding her modern BMW GS650 with heated grips but we won’t be dwelling much on that.

The Norton’s 2.5 gallon tank meant many gas stops for which our aged bodies were thankful.

All three Norton’s ran great and why not? Notice the fuzzy sheepskin seat cover I added? Ahhhhhh. It was really nice until I had to put on my rain pants and then it was so slippery while riding downhill I was sliding into the tank. 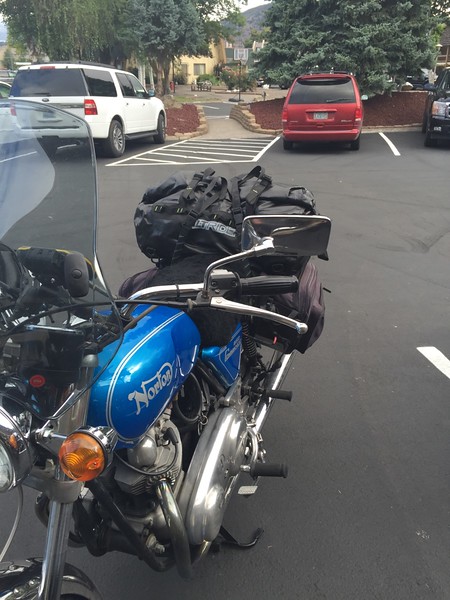 On the way down we rode through Lassen Volcanic National Park.I know, I never heard of it either…. slightly embarrassing. We stopped at the highest point of the road, 8,500 feet for a picture in the snow. Yes, it was cold. 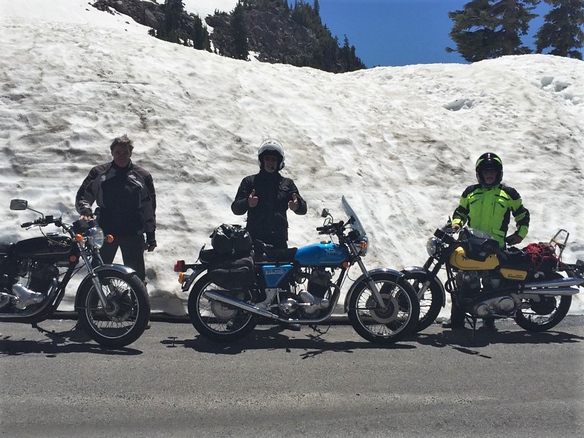 I did connect the controller for my heated liner but on the Norton with old Lucas Electronics it is best not to try to stay warm and have a headlight on at the same time. Fortunately there is a switch to turn off the headlight, something missing on modern motorcycles.

After three days of riding, mostly in the cold and rain, we arrived in Quincy CA for the INOA festivities. Over 300 people attended from around the world on over 200 Norton motorcycles. We were glad to see “Gringo Doug” who we had visited in Baja a number of times and most recently in January. We also got caught up with Art Bone of MotoClassico fame who we visited in San Miguel de Allende Mexico.

The rest was plain buffoonery…..  Members of the Northwest Norton Owners

But wait… let the games begin!

Toss the water balloon over the pole

Put the egg on the cone

Deby with egg in hand. I got style points for my choice of helmets.

Did I mention we took third place in the egg place challenge?

But wait… after the slow race we had motorcycle jousting! How cool is that?

The goal is to get the rings off the “Viking”, it’s not as easy as it sounds.

Besides consuming beer our club was responsible for morning coffee, something that annually earns us the highest respect among INOA members. Here is club member Joe Smith serving his morning “Joe” (get it?).

When it all was over we turned around and rode 1,000 miles home. Except for the last day the weather was perfect. On the way home Deby and I took our own route, avoiding major highways and sticking to the back, back roads that are in no way suitable for a 42 year old motorcycle with a much older rider but we made it.

We stopped at the Lava Beds National Monument to (what else) collect rocks.

Fun climbing around the lava but all the rocks are the same (go figure).

Just the two of us on the way home.

Taking a break along a river.

The mighty Norton still humming along but not as shiny as when we left.

The last night we stayed in the little, really little, town of Maupin Oregon. Literally, a bend in the road. According to Wikipedia there is 418 people and the town is 1.4 square miles. The population is 0.2% Asian. Hmmm, if my math is correct that is a little under one person. I’m pretty sure we saw her working at the restaurant.  We stayed at the “The Oasis” hotel in a small cabin built in the early 1900s, exhausted after 350 miles that day, whew.

At last, home. The Norton was nearly flawless in it’s 2,000 mile trek. It used less than one quart of oil and only required a chain adjustment along the way. Way to go. After the last leg in the rain I was reminded of the phrase “rode hard and put away wet.” That is exactly what I did to this horse.

Some of you might not know that Deby and I had our first date on this very motorcycle over 36 years ago. in the 70’s I rode it nearly coast to coast and usually made it home…. eventually. Yes, a true adventure motorcycle in my book.

Finally, here is the route we took. Fun roads. I have the .gpx files if anyone is interested in the details of the route. Send me a message.

Once again, thanks for following our humble blog. It’s fun to document where we’ve been and I try to be accurate enough that others could visit some of these same places. This post should prove it’s not about the motorcycle but about the ride and the adventure.

12 thoughts on “Adventure on a Norton!”