I received word that after even more problems with customs the bikes were finally released. Somehow, the crates were delivered to the air freight company but the original titles were in an envelope with the Miami shipping company. Do I need those to import the bikes into Argentina? After a couple of frantic calls and e-mails the response was an emphatic “maybe.” Our Seattle agent said not to worry and said they would send it overnight by FedEx to our hotel. When I got the tracking number the expected delivery date said December 30th, which happens to be today as I write this. Sure enough I just got a notice on my phone that the package was delivered today. Obviously I ended up not needing the original titles and I’m now far away from Buenos Aires.

The bikes were scheduled to fly on Christmas Day with Atlas Air, a freight only company that I learned has maybe less than a stellar reputation making on time deliveries. I was told by one person that if they don’t have enough freight on the plane they just wait until the next scheduled trip. They fly to BA every Wednesday and Sunday. I was hoping the Sunday flight took off.

It took some time but I found out the flight number and used my cell phone flight tracking App to check on Atlas Air’s progress. Here is what I saw: 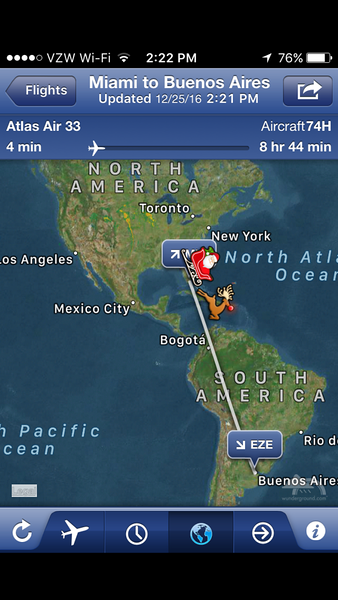 Hey, how about that! Not only was the flight on it’s way but it was being delivered by Santa himself. I suppose I really was good all year.

In preparation for the imminent arrival of the bikes we moved from our San Telmo hotel back to the international airport Holiday Inn. We had been there off and on for what seems like many days and while it was nice spending time at the pool reading books we were restless and starting to get a little depressed every time we thought about the situation. The whole time this billboard was staring down at us. I took this picture out our hotel room window, but it was just as visible from the pool. 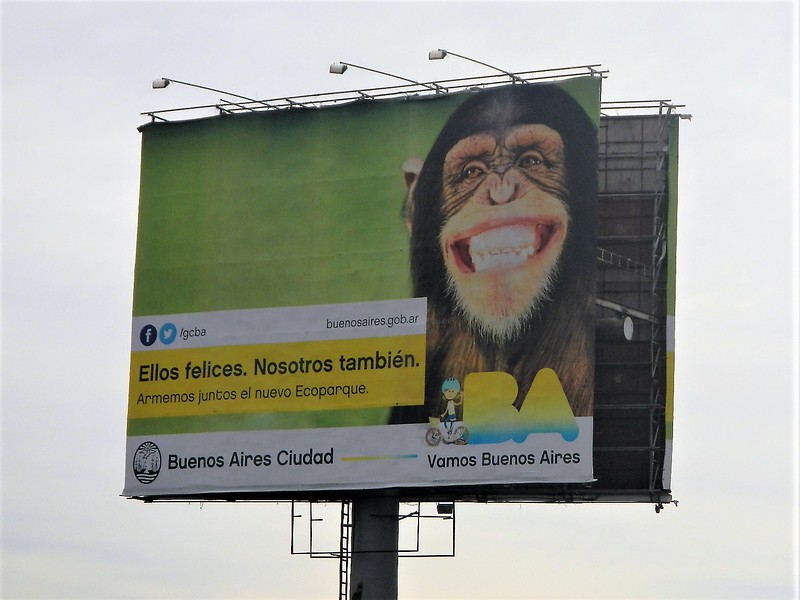 It cheered us up every time we looked up. Basically it says “They’re happy so should you.” I love it, yes we should be happy.

Before I finish about the motorcycles I want to share a little bit about our time back in the San Telmo district of Buenos Aires. We spent a few days at a soccer themed hotel The Hotel Boca. It was just ok so we went online and found another hotel a few blocks away, The Babel Suites. We liked that place better because it had a rooftop pool and bar for snacks, a good place to spend some time. 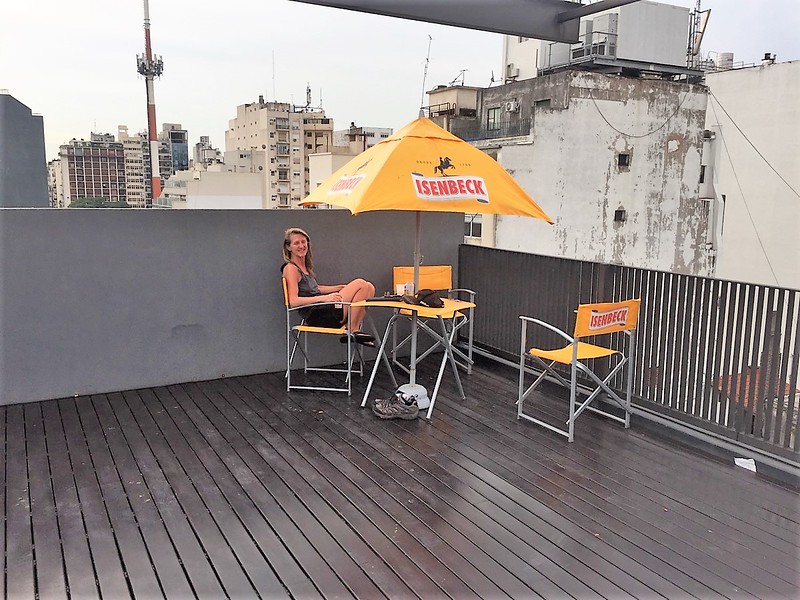 Great views of the area. 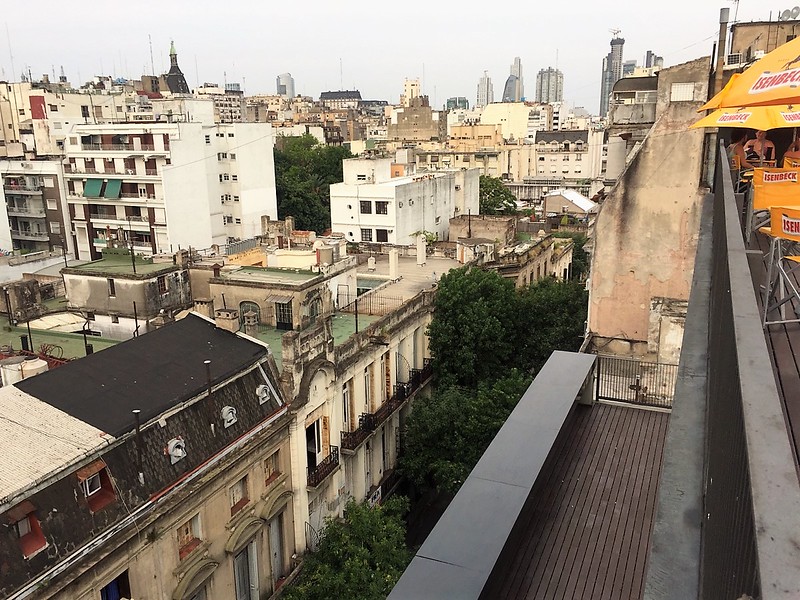 By 7:00 as the temperatures started to moderate people started coming out to their rooftop decks, cooking food and children playing, it was a small glimpse into the private lives of these Pprtenos (what they call residents of BA).

We did another really fun thing. Hache who we had beers with in the last post invited us to a wine tasting at a local wine store. Sure, why not? Of course like most things here, as in Europe, it started at 10:00 PM. Easy for me but a little past the normal shut eye time for Deby. Still, looking forward to a diversion, some fun and a little wine we gladly accepted the invitation. Wine is a really big deal in Argentina and we wanted to check it out.

Hache and Marrana met us at our hotel and we shared a cab to a more upscale part of town. By 10:30 we found ourselves in the wine store cellar with about 30 other people. It all started very orderly. 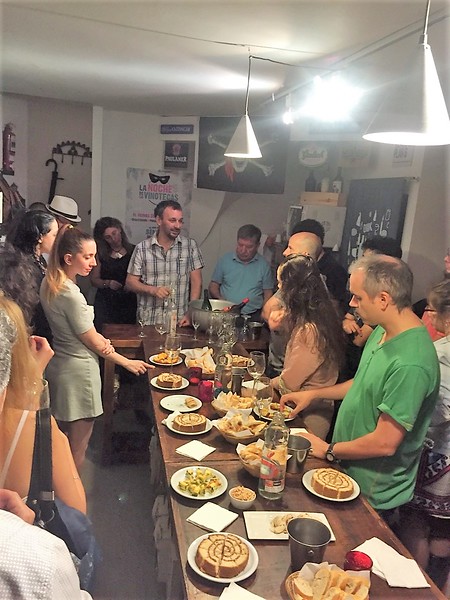 Everyone was on the best wine tasting behavior sampling little bits of food. Then our hostess started explaining in rapid Spanish about the wines for the night…. 36 bottles would be sampled. Yes, even with sips that is a lot of wine. Hache did a fantastic job helping with bits of interpreting but as we sampled more and more wine my Spanish suddenly started improving and I knew the general vibe of what was going on. Amazing how that works. Most of the wine was variations of Malbecs, I didn’t know you can have white and rose Malbec but yes you can in Argentina. 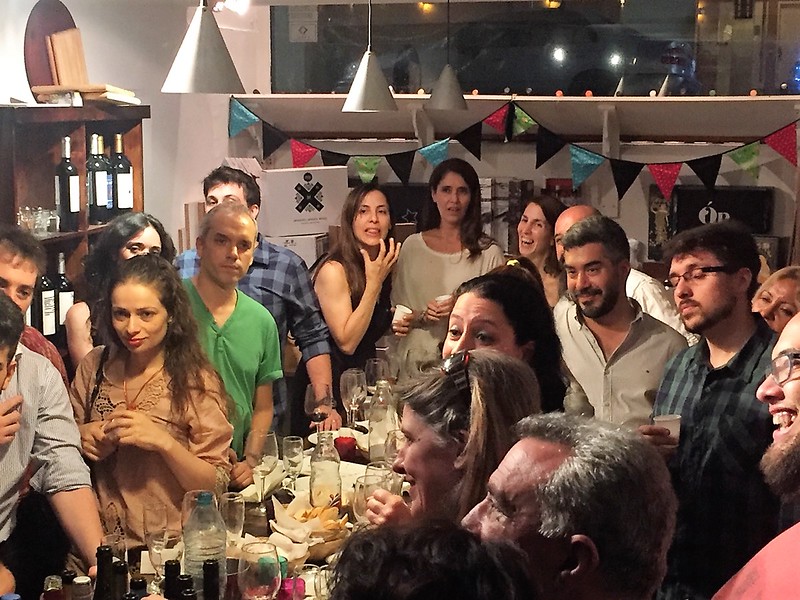 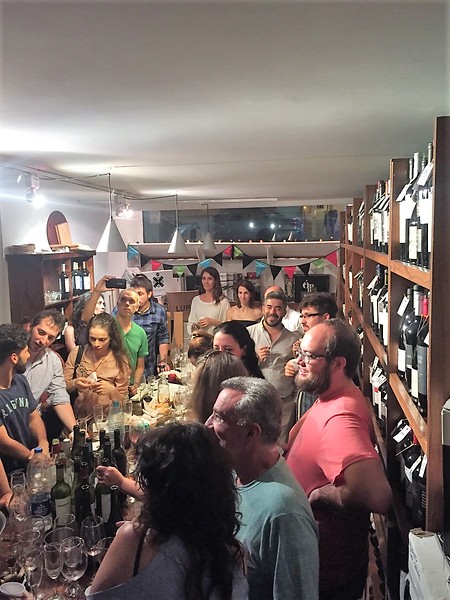 Here is a picture of me and Hache with a bottle of wine called Demento. It means in Spanish just what you would think. 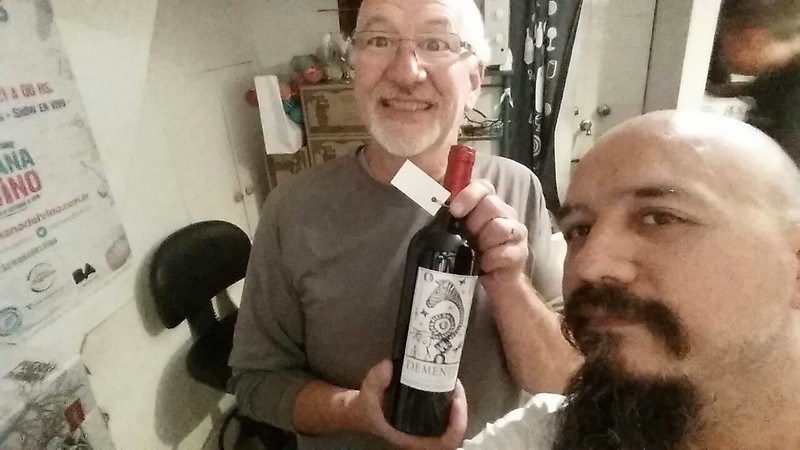 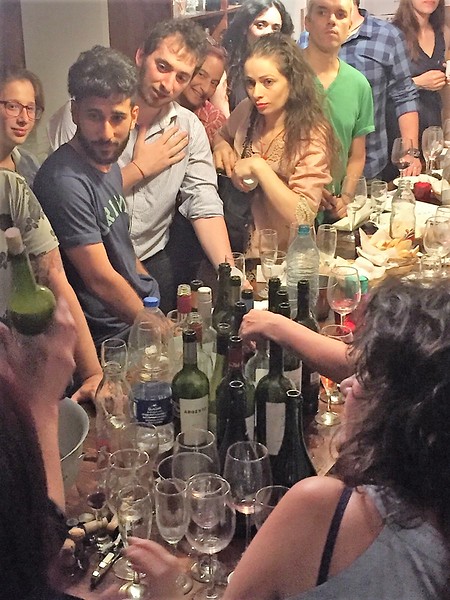 So… you probably get the idea how that night turned out. It was going on 2:00 AM when we finally made it back to the hotel. Thanks Hache… we owe you.

One more thing and I promise to get back to the bikes….. really, this is a motorcycle blog isn’t it?

We had one more day in San Telmo so, as we usually do, went for a walk. Deby is interested in the birds here so she got a few pictures. I like this guy with the red beak and green legs. 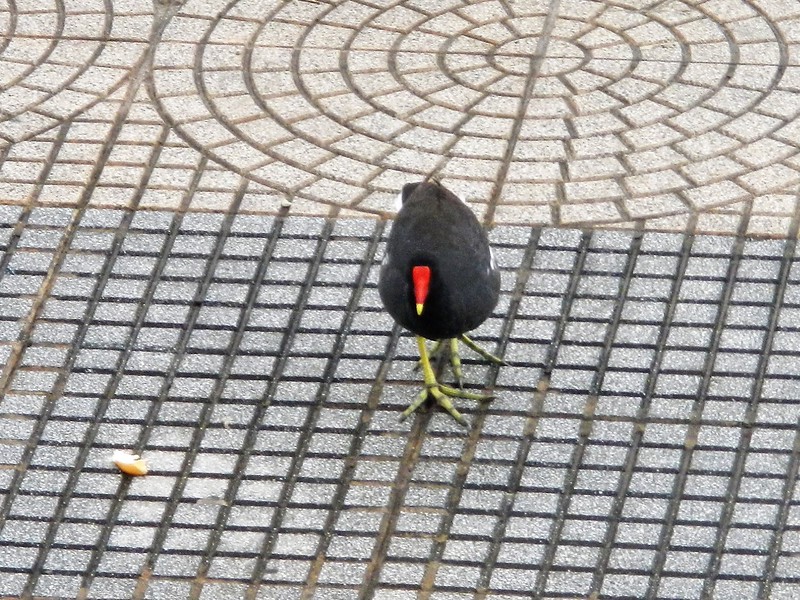 Here is a mean looking pigeon. Not afraid of people at all, he was really this close.

I really like this picture, how many ducklings can you count? 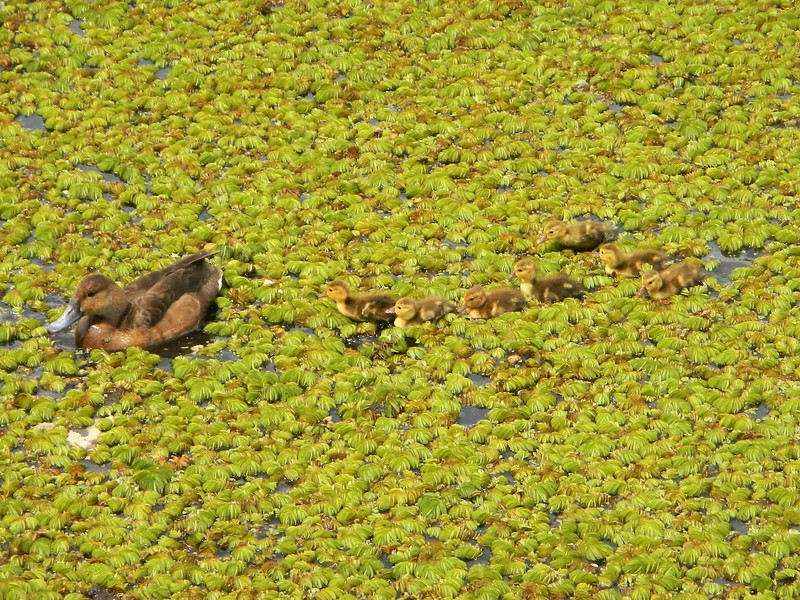 These green parrots were everywhere. 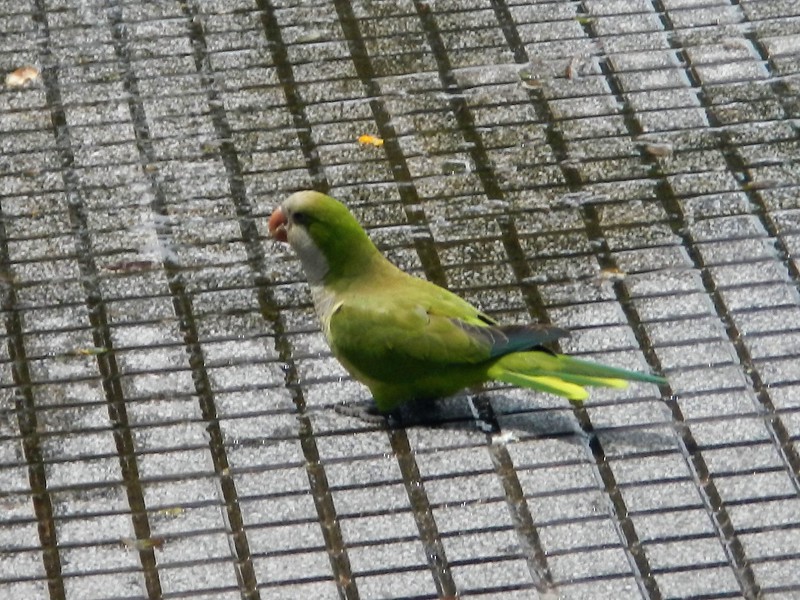 We don’t really know the proper names of any of these so I’ll make stuff up. Here is the red headed black bird. 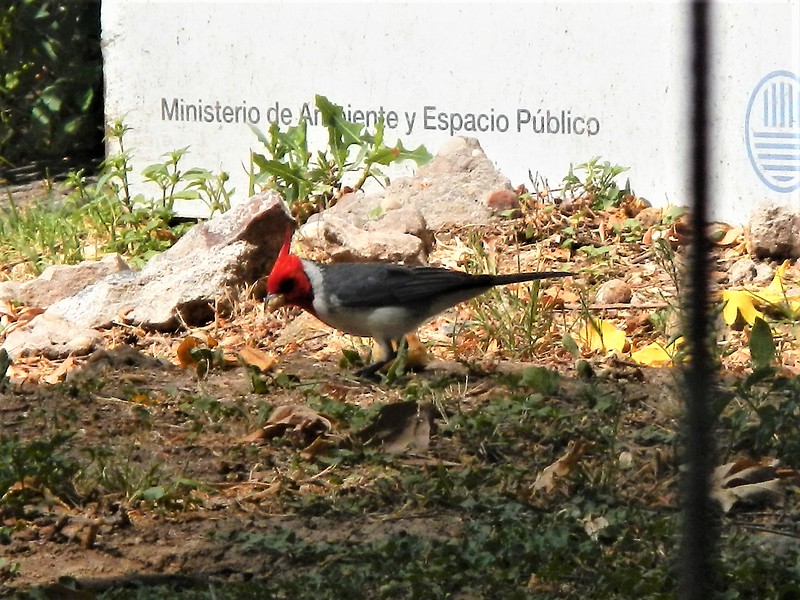 And finally the brown bird with orange wings or Orange Winged Brown Bird.

While Deby was taking bird pictures I took a picture of this motorcycle. Makes sense to me. I love the headlight that seems to have the purpose of illuminating the tree tops.

Here is a tree with pointy stuff….. don’t run into one of these.

Oh, and here is a bug picture for my niece Sophia.

And back to the bikes……

So, the day after Christmas we met Sandra and Javier at the airport at 9:00 sharp. Along with our bikes was a motorcycle from Germany for a woman that was also just starting her trip in South America. In typical fashion we started going from building to building collection documents, here, making payments there, collecting more documents somewhere else, getting copies somewhere else and then more payments at another place. Some places only took cash, other credit cards. Eventually we were ushered into the secure cargo area of the airport. First we needed pictures taken, passports checked and official name badges made.

Interspersed with all this was a lot of waiting. Here is Leah from Germany and Deby.

Lea is riding for a year solo on a great big Triumph Tiger. She is a journalist and has traveled through much of Europe and Asia already. More about her here on Facebook: https://www.facebook.com/got2go.de/?ref=br_rs Nice to meet you Lea.

Once we were in the secure area we weren’t supposed to take pictures but I snuck  a few anyhow (sorry Santa). Here is Lea’s motorcycle crate, notice the size and lightweight construction? 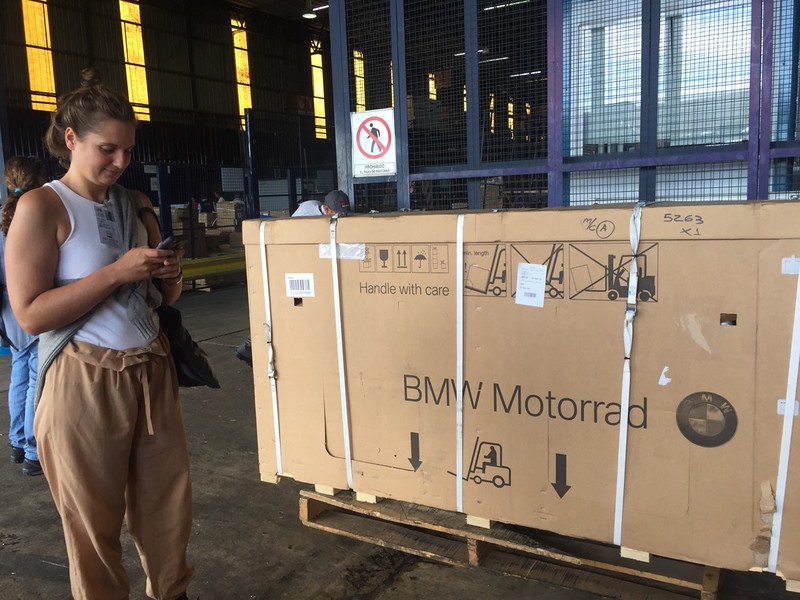 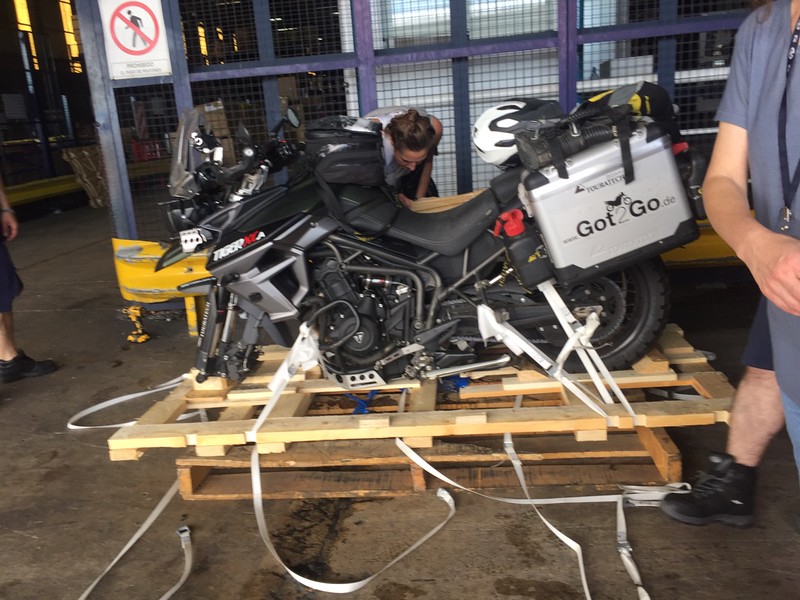 Us? A little different! 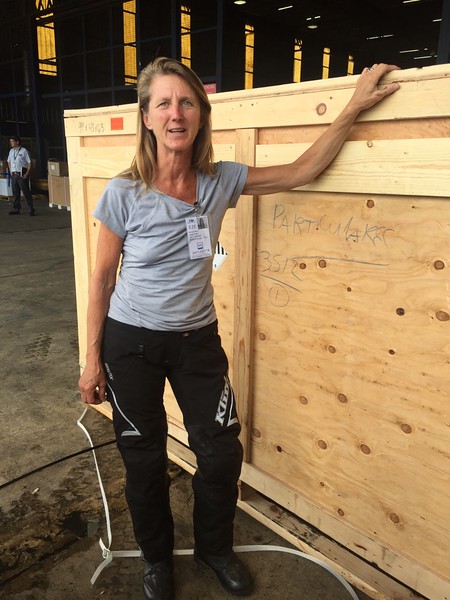 Geesh! Really! A big part of the delay is because the crates were 6 inches too tall. Nobody thought to tell me that, would have been nice to know. Think we could have squeezed out 6 inches here?

Deby’s had even more room.

So we learned a lesson and had a great time exploring Buenos Aires and the area. Six hours after we arrived we were riding out of the airport back to the hotel to gather our things. By 4:00 we were on the road. There was a chance of rain, we didn’t care we just wanted to ride as far as we could get as fast as we could get there. 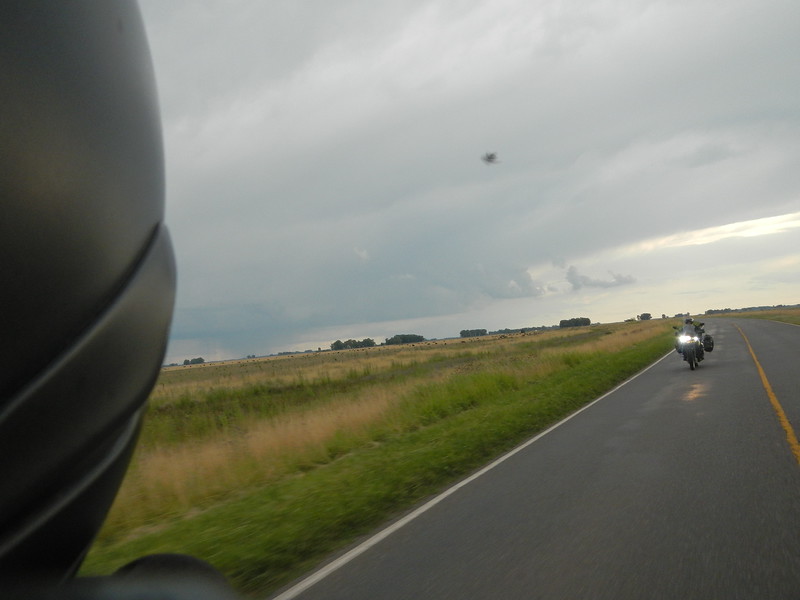 Here’s how far we are, it’s been hot and long days. Tomorrow we hope to get to the mountains where it’s cooler and a little more scenic. 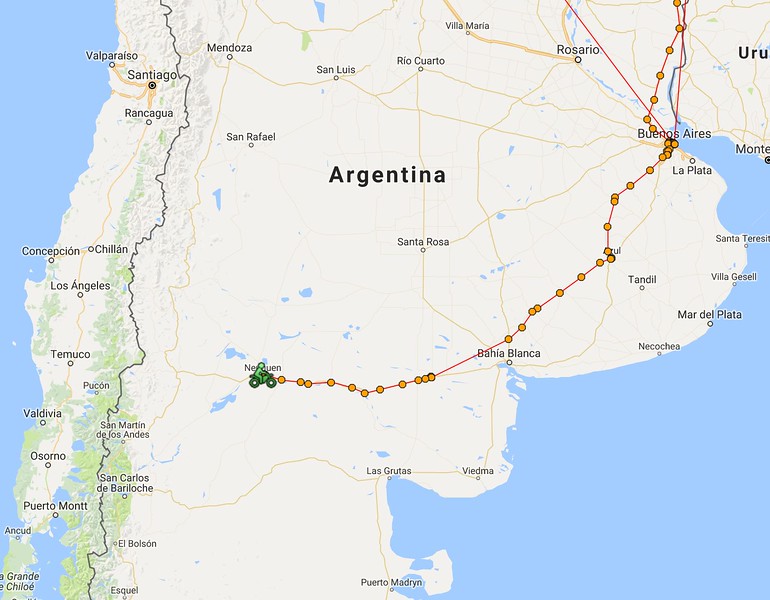 Ok, there you go. Sorry for the delay for this one. I had hoped to get it out yesterday but there was an internet outage throughout this whole part of town for most of the day yesterday into this morning. Ahh, no worries was the general attitude about it. Mine too.

15 thoughts on “We have Motorcycles! On with the ride.”