We wanted to be on the bikes by 8:30 AM to make the first ferry north. We were told it left at 11:00 and to be there an hour early. We knew we had an hour on questionable gravel roads and looking out the window confirmed the weather report, rain. The only problem to this plan….. the hotel only started serving breakfast at 8:30. Huh? Most of the people at the hotel were going to the same ferry and planning to leave at the same time. I checked – 8:15, no coffee. Come back later. I spent some more time loading the bikes and getting my boots and riding gear on returning at 8:35. The place was swamped, the food was gone and I got the last drop of coffee. I eventually managed a piece of bread and a second cup but decided that would have to be enough for the day. Into the rain.

Here was the route for the day.

We arrived plenty early and the roads weren’t all that bad, not much different than the hundreds of miles of similar roads in the wet Washington back-country.  So once again we found ourselves standing in the rain with our helmets and full riding gear keeping us warm and dry. 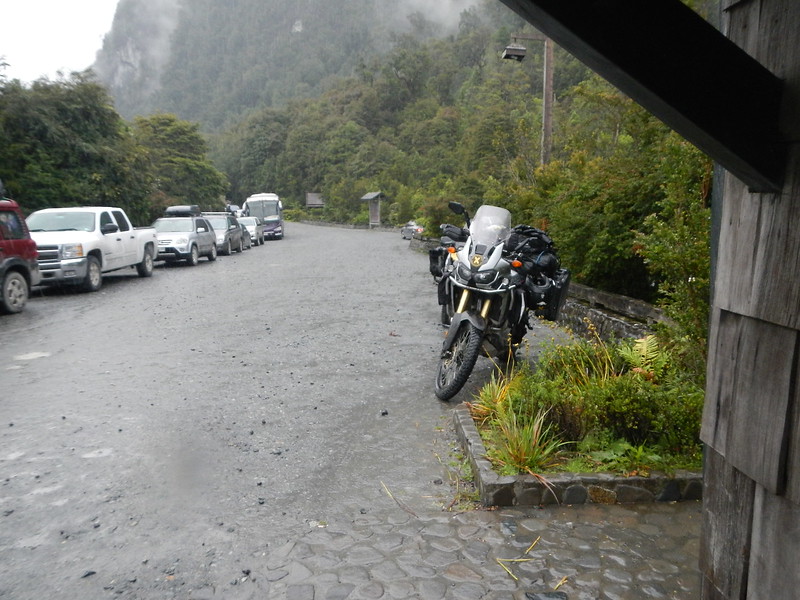 Similar to the Washington State Ferries bikes go to the front. That’s pretty much where the similarities ended. We found the bikes actually load last, oh well.

The boat loads and blasts off full steam ahead. I’m adding a few extra pictures for my friend Greg who recently retired as a Captain on the WA Ferry System. With the ship moving these guys are raising the platform and when it got all the way up they climb to the top and secure a big bolt. 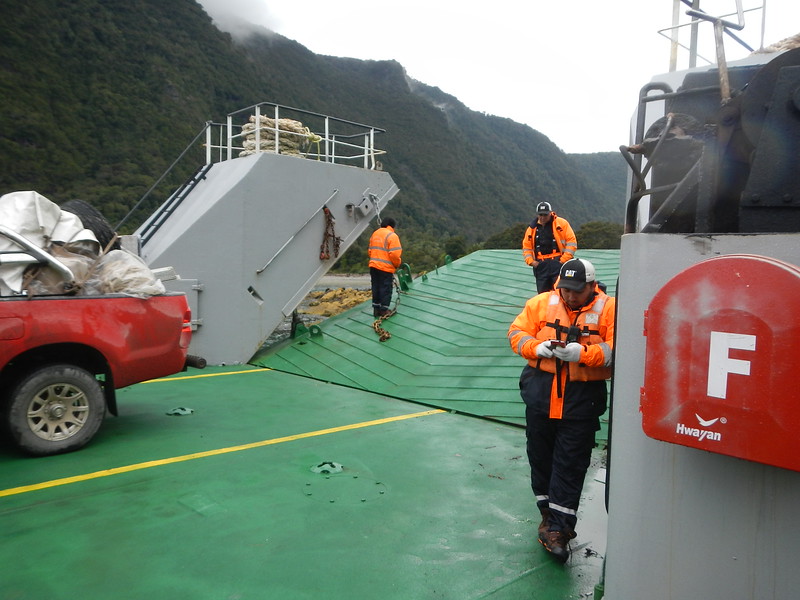 The first leg was only one half hour so we soon found ourselves back on another gravel road to the next ferry crossing. Being on the back of the ferry meant we were the last off the boat so we had a line of slow moving cars to pass on the slick mud/gravel road.

It was only about 10 miles to the next crossing at Vodudahue where we had about an hour wait. By now the rain had lightened up and we had a pleasant wait. An enterprising local showed up with fresh empanadas, yum.   Here is another thing different about the ferry system here, and this happened every time. The nice looking ramp goes straight down which seems right. The ferry however, “docks” at a 90 degree angle to the ramp making for a silly angle for loading and unloading. 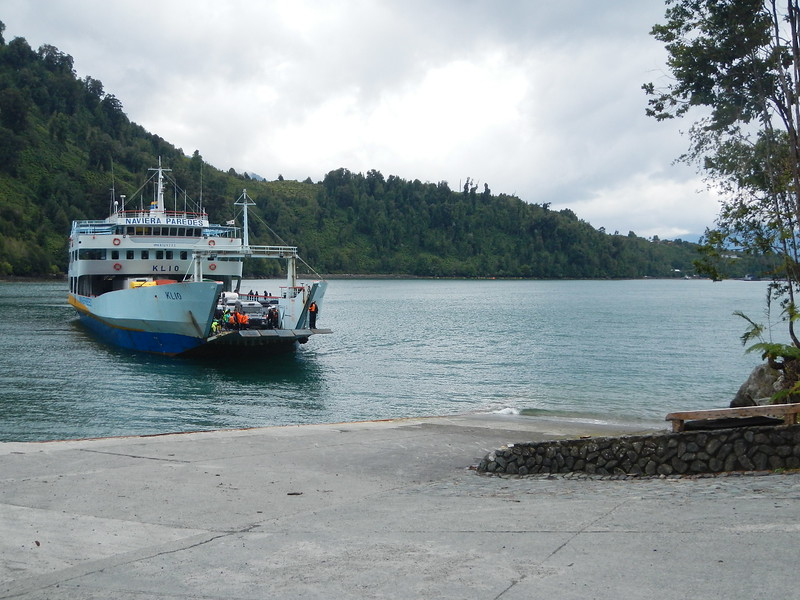 Which makes for some interesting loading and unloading. This guy below is standing on the edge directing the captain where to dock.

They have these big wooden planks they use to help things out. 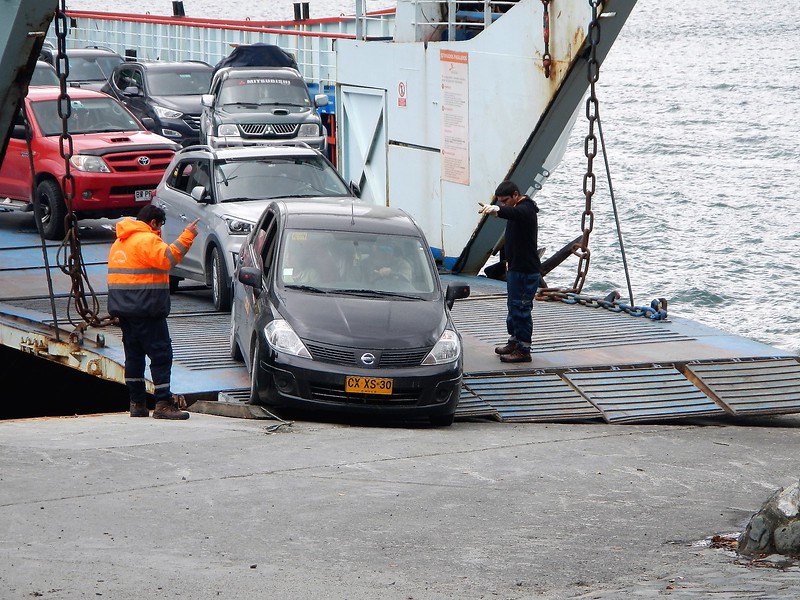 The wooden planks help with the tour buses.

The second leg was on a bigger ship and would last about 4 hours. This ship only had loading on one end so they had everyone turn around and back in. Since we loaded last that put us in the front of the boat. 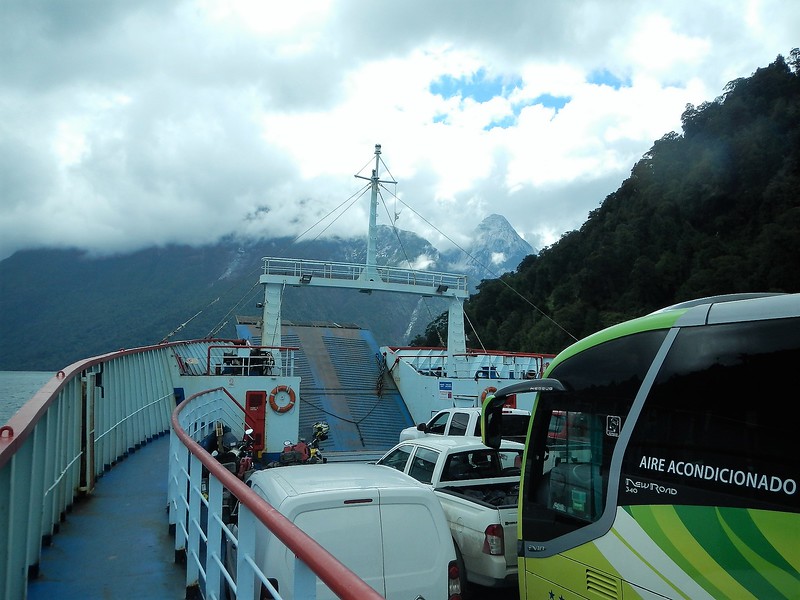 Great views along the way. 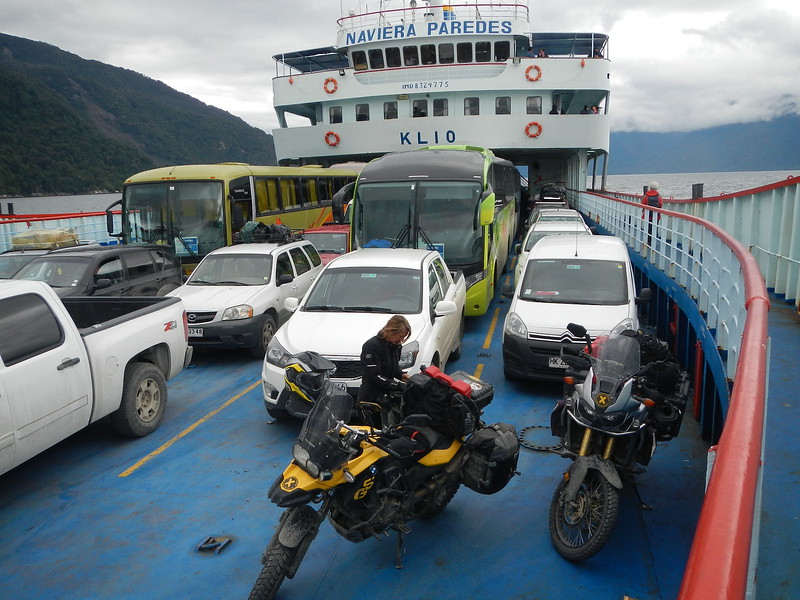 We got a look at the technical part of the ship, cool!

Here’s another thing different about the Chilean Ferry System…..

Finally we dock and make another mad dash to the next ferry which loads similar to the others. You could tell we were getting closer to a big city. The ferry was full of tour buses and even a cement truck? Can they do that? I know it was full because the thing was spinning away.

Finally finished with the last ferry we blast north on ruta 7 and decide to bypass the big city of Puerto Montt for the smaller city of Puerto Varas. It was 8:30 PM and although we hadn’t ridden very far the 12 hours was taking it’s toll. We missed the turnoff for the city on the toll road and circling back missed it again so we just pulled over to decide what to do. I looked up and saw a sign for what looked for a nice hotel 400 meters away with a big arrow so off we went. The hotel was average at best and didn’t have a restaurant.  The only staff person took pity on these haggard stragglers and made us (what else) some ham and cheese sandwiches. As absolutely sick as we were of those things by now we were glad for something to eat and especially loved the cold beer to wash it down. Only later did we find out we missed one of the gems of Chile by not visiting the city of Puerto Varas. Oh well, maybe next time……

A few logistical things. You may have noticed that I am getting further and further behind on the blog. It’s crazy how difficult it is to get internet access. All the hotels have free WiFi but once connected we learn it comes and goes at random times which means it’s mostly gone. When it does come on it’s very slow. Most times we have to pay for hotels with cash because the internet is not working for the credit card machine. This is a problem because since everyone needs to use cash the ATMs run out so that is hit and miss. Well I suppose I should be slowing down and enjoying being unplugged…

Here is the link for our live satellite tracker in case you want to make sure we are still moving.

Hopefully we can find a place where I can get caught up a little. Thanks for not giving up! And thanks for the comments.

7 thoughts on “A Three Ferry Day”