Ha… have a burst of internet so let’s rock!

Heading north from Puerto Varas we blasted to the city of Valdivia that was recommended to us. We made a quick stop in Orsorno to get a part for Deby’s bike that had worked it’s way loose. No problem quick stop at Motoaventura and we were on our way. The route is basically a 4 lane interstate with tolls at what seemed like every 10 miles. No free lane for motorcycles like Argentina. As we rode north the warmer it was getting, soon it was in the 90’s and we were sweltering in our riding gear we kept on for safety. We arrived in Valdivia late on the Saturday afternoon and checked into what turned out to be an excellent hotel. I set up in a spacious patio with large open doors with views of the river and managed a couple of blog posts. As the sun set Deby and I went for a walk along the malecon. As is typical after dark the city came alive, especially on a weekend. There was almost a full blown festival going on, street performers, vendors, nighttime dinner cruises and all the streets were full of food trucks and roadside restaurants. At one point while walking along the water we heard loud grunting sounds coming from the rocks along the water below the walkway. Did someone fall over? Someone hurt? Chilean passion? No, in the dark we saw giant elephant seals. Wow, these things were huge. Sure enough we wandered off the path and down a boat ramp to get closer. We were really close watching these huge animals and saw a few had babies. They were absolutely oblivious to the raucous carnival atmosphere only feet away. A contrast you would never see in the U.S. Of course I didn’t have my camera or phone for pictures.

We walked and took in the action late into the evening ending up at an excellent food truck near our hotel for some of the best sandwiches on the trip. The only thing I didn’t like about Valdivia is that we only stayed one day.

We wanted to ride over to the coast so we spotted a road on the map that cut west from the grueling interstate highway and looked to promise a nice ride where we could view the Pacific ocean and hopefully enjoy some cooler temperatures…. it turned out to be none of the above. Turning west from Temuco the road was fine but as soon as we twisted north the pavement turned to really bad gravel. Not loose but a bone jarring, teeth rattling, screw loosening rough road. The route was actually about a half mile from the coastline and lined with tall trees, no views of the ocean at all. No pictures…. boring, nothing.

Well, something interesting happened. We went online to Trip Advisor and found this gem of a hotel right on the coast. Looks nice right? That’s we we thought so we clicked on the Book Now button, received an e-mail confirmation and programmed the location into my GPS. Presto, we had lodging for the night.

Until we actually showed up, the place was basically abandoned and looked like the Bates Hotel.

Bravely we went inside and found two young women in what looked like a never used restaurant. I pulled out my cell phone and showed them the picture and reservation confirmation and they burst out laughing. Really? They couldn’t believe it. First that it was being advertised on the internet and secondly that someone would be stupid enough to pay $75 to stay at this dump. Realizing this wasn’t a place to stay we jumped on the bikes and got outa there.

Turned out to be a good thing. We rode to the next city where I had decent cell reception and I burned up some data off my international plan to find a place on Booking.com. This was much better. We ended up at the Complejo Pehuen Lago Lanalhue. Ahhh, what a nice place. Cabanas right on a large lake surrounded by pine trees.

Tired and spotting a nice location we decided to stay an extra night to recharge our batteries, figuratively and literally. Yes, they had WiFi, No, it didn’t work. Forget it, we sat around and read books. It’s vacation right? My dad has a friend who lives near him in Mequon WI who is from this area and he thought she would be here. Through e-mail communication and an actual phone call we found out she was still in Wisconsin but her Uncle has a cabin on the same lake and he would like to visit us. Hey, fine with me! So on Monday night he drove to our cabana and we sat in the restaurant drinking tea and having a great conversation. His English was about as good as my Spanish, it was a fantastic evening. Nice to meet you Carlos!

Finally Tuesday January 24th it was time to leave. After two days we got to be friends with the family that owns and runs the resort. They mentioned if we ride north along the coast some more there were some caves we should check out. Caves? Sounded good to us so off we went.

Yes, there were caves, cool.

The caves open to a fantastic secluded beach

Lots of rocks to climb around on.

But soon it was back to the interstate. 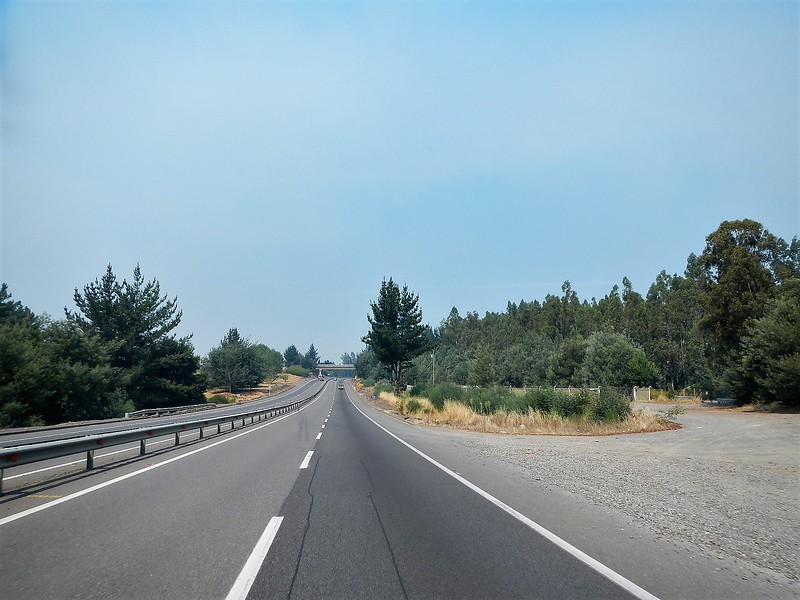 We were warned of huge fires to the north and not to try our planned route along the coast to re-create this portion of the ride we did in 2013. I thought about going anyhow to see just how closed the roads really were but after checking the news and seeing billowing smoke all around us I decided it would be best to head back to the boring, hot interstate. More about the fires here: 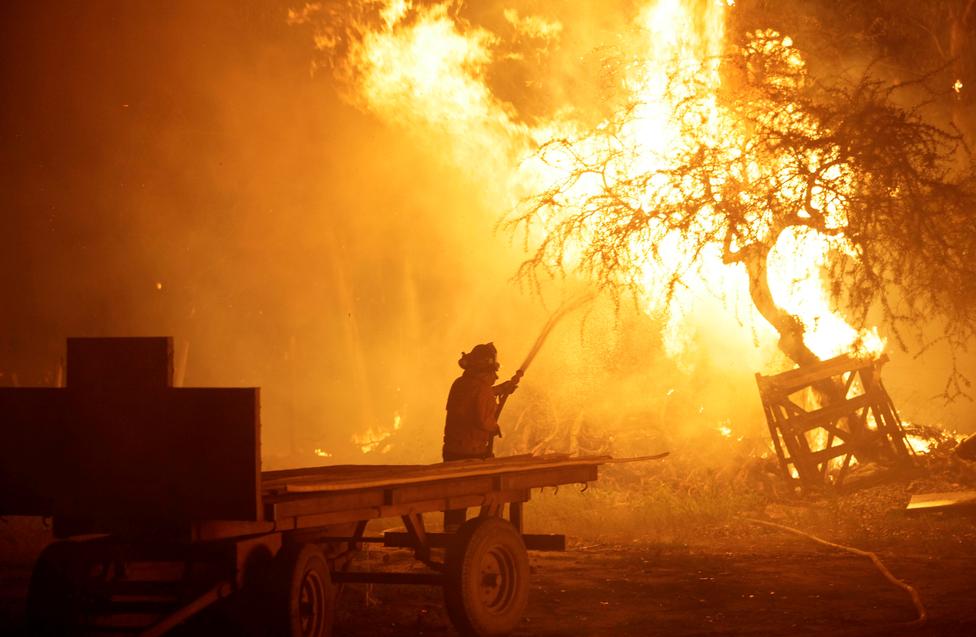 We ended up at the town of Chillan, nothing of a town but we stayed at a nice hotel with a restaurant. It was hot all day, in the 90’s and we were just glad to be of the bikes.

It was occurring to me that at least on this trip there was nothing that great about or ride through Chile. The roads, were mostly clogged with traffic, the tolls were expensive and for us it was hot and the sky was full of smoke. We were thinking it is time to jump over the Andes and get back to Argentina where we had been for most of the last two months. The one good thing about Chile is the economy was better and for some reason, maybe due to tariffs we were told everyone from Argentina goes to Chile to buy motorcycle parts, especially tires which I had someone tell me were $600 US dollars each in Argentina. Yikes! I e-mailed our friends at Motoaventura, the same place we visited in Orsorno and they had a shop in Santiago and would have tires waiting. So we blasted on the interstate choosing the fastest route on the GPS to the motorcycle shop.

One interesting thing along the interstate was the Copec gas stations, nice, modern with free Wifi and fast food restaurants. This one had a living wall. Interesting.

Hot, fast, long we just blasted along. When we arrived at the shop they said they could also change the oil on Deby’s bike but recommended I take my bike to the Honda dealer around the corner. They called the dealer for me and they said they could get me right in for fresh oil. Nice, well almost. When I arrived they had only one of the two required filters and no air filters. I had them change the oil anyhow. Interesting that they had a half dozen motorcycles just like mine for sale in the dealership but no spare parts. I hope nobody buys one and needs the 1,000 mile service any time soon.

By the time the bikes were done it was late so we checked into the closed hotel, a Radisson, the most expensive yet but we didn’t care. Once again we were hot and tired. This was the headline of the newspaper in the hotel.

Even my Spanish was good enough to know what it meant: Record heat. I could have figured that. .. Here is the “heatmap” from my phone app, we are at the blue dot…

On the road early to beat the heat we need to head east over the Andes mountains where we hope it will be cooler. At least crossing the pass we know it will be better at 8,000 feet. It was, ahhhh. Trying to stay cool we stop at a roadside gas station for “lunch” Gatorade and ice cream.

A ways down the road we came across this guy along the road waving us down. Of course we had to stop for a fellow motorcyclist in need. With his limited English and my slowly improving Spanish I figured out he was out of gas and could he buy some of ours? Of course I filled his little tank with one of our 5 liter containers.  His name was Mauricio and he was a lawyer from Buenos Aires. He is on a huge trip around southern South America on this scooter. Crazy! That is true adventure. When we got to the border crossing he pulled in only a few minutes behind us so we got to chat during our 2 hour wait. His scooter is a Honda 650cc. Amazing.

I took this picture as we passed him on the road. Nice riding gear.

Ok, so now the internet is failing so I’m going to wrap up this last section of Chile.

We made it across the border and back into Argentina. Together we breathed a sigh of relief, I can’t exactly explain why. It’s still HOT and even hotter here but that will be for the next post.

One side note. We were hoping to meet up with our friends Paul and his son Max who live in Issaquah WA. They are riding south and we had planned to meet somewhere along the way. We had been in contact using our SPOT trackers and WhatsApp but due to spotty internet connections couldn’t actually make contact. I knew their location from their tracker and suspected we would cross paths somewhere during the day. Sure enough just before we crossed the  border with Argentina I saw two giant ADV bikes screaming towards us at high speed on the twisty mountain road. It must be them! I flashed my lights, we waved our hands and pulled over to the side of the road. They waved and passed by. Was it them? I wasn’t sure, should we turn around and chase them? We waited for a minute and decided we wanted to get to the border before it was too late so we kept going.

That night I got a WhatsApp message from them, yes it was them. I took a few minutes for them to realize it was us so they turned around and chased after us but couldn’t catch us before the border. So finally connected, we found ourselves not far away but on opposite sides of the border. Bummer…. sorry we missed you guys. Paul and Maxx’s blog is here: https://motorcycletheamericas.com/

Ok, I hope this uploads and the internet gods are with me. Stay tuned for more exciting riding in Northern Argentina, more spectacular roads, HOT HOT HOT temperatures and cool sights.