Ok, it’s been a few days without internet so I will try to get caught up. We are truly in the remote parts of southern Patagonia. It seems like Alaska with long stretches of nothing at all. We need to carefully plan out fuel stops and we are glad to now be carrying extra fuel containers. When I left off we recovered Deby’s bag and were in the city of Gobernador Gregores. Bag in hand (on bike) and full fuel we got an early start back to the most difficult part of the route, now for the third time. It seemed like the third time was a charm. The wind wasn’t too bad, the weather was nice and when we arrived at Tres Lagos there was actually fuel. All was well with the world. In Tres Lagos we met these two local guys on their way back from Ushuaia, they were amazing, I wish I would have thought to take their picture. They were both easily in their 70’s, were riding 250cc motorcycles and camping the whole way. Neither spoke a word of English but as is typical lately we had an enthusiastic conversation looking at maps and discussing he best routes south. I did get a few pictures of their bikes.

I love the pannier system, really neat and tidy. This is one of the Honda Tornado bikes that we see a lot of here.

The other guy had some cool cases attached to his bike.

Who needs all that fancy Touratech stuff??? These guys were just fine.

We were just in a hurry to finally get to El Calafate so I didn’t take many pictures but managed to stop for this green lake full of glacier water along the road.

We arrived early in El Calafate and treated ourselves to a really nice hotel. Hotel Imago. It is an expensive tourist city with many people flying in to check out the nearby National Park, Los Glaciares (The Glaciers). You can probably guess what’s there. We ended getting a really good rate off the internet so we booked two nights. Yea.

We arranged to park the bikes and be tourists for a day. The hotel arranged a bus to pick us up at 9:00 and go on an all day tour, first to an estancia (ranch) for a tour and lunch and then to the Los Glaciares where we would catch a boat to see the glacier close up and finally a walking tour.

Read this next part carefully – pretty amazing. First I have to backtrack to the lost bag…..

After we noticed the bag was lost, it was getting late and we were low on fuel we were riding north on the loose gravel road. I decided that if I saw any motorcycles I would wave them down and ask if they saw a motorcycle bag. We saw exactly three motorcycles, one guy on a Honda 250 (of course) and a father son duo on bigger bikes. I stopped them and asked in my lousy Spanish if they saw a bag, nothing, nada, no-go.

Now jump forward two days to our all day tour of the Glacier. At 9:00 the tour bus showed up at the hotel and the guide stepped out and asked if we were Donn and Deby. Yes…… Then he asked if we ever found our bag!!!??? What? HE was the guy on the Honda 250 we randomly stopped in the middle of nowhere. He was on his way back from a two week motorcycle vacation. We spent the next 9 hours having a great time with our new best friend Pablo.

On to the tour, I’ll keep it shout since this is a blog about motorcycle travel not touristy stuff. You can click on any of the pictures to jump to my SmugMug account where there are even more pictures if you really want to see them.

First we stopped at the estancia where we watched them sheer a sheep (which as it turns out is really difficult for someone with English as a second language to say).

This was done by a real gaucho, or at least one for the tourists with the authentic gaucho hat. Interesting thing…. driving along the road on the tour bus we saw a real gaucho stopped along the road, not the romantic image you might think. This one was tending his heard while sitting on a motorcycle, at least he had the traditional hat. Pablo pointed out the modern gaucho sin horse. As we got closer we noticed the reason he was stopped is he was busy texting on his cell phone. Ahhhh, the wonders of the modern world and the end of an era for the lonely gaucho of the Patagonia pampa.

Guess what we had for lunch…..

At the glacier we all loaded onto this boat.

And off for a close up look at the glaciers. This park has over 350 glaciers and they are HUGE. 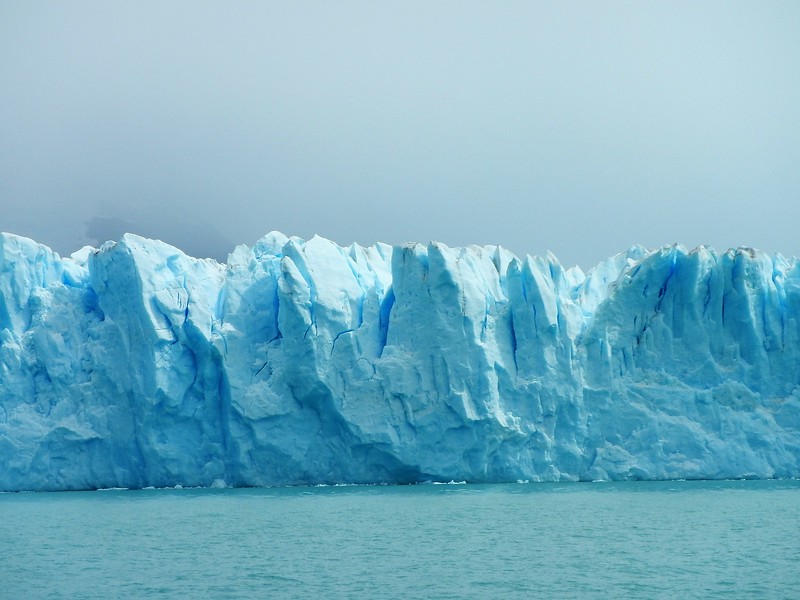 Of course the pictures don’t come close to doing them justice. The color was amazing. 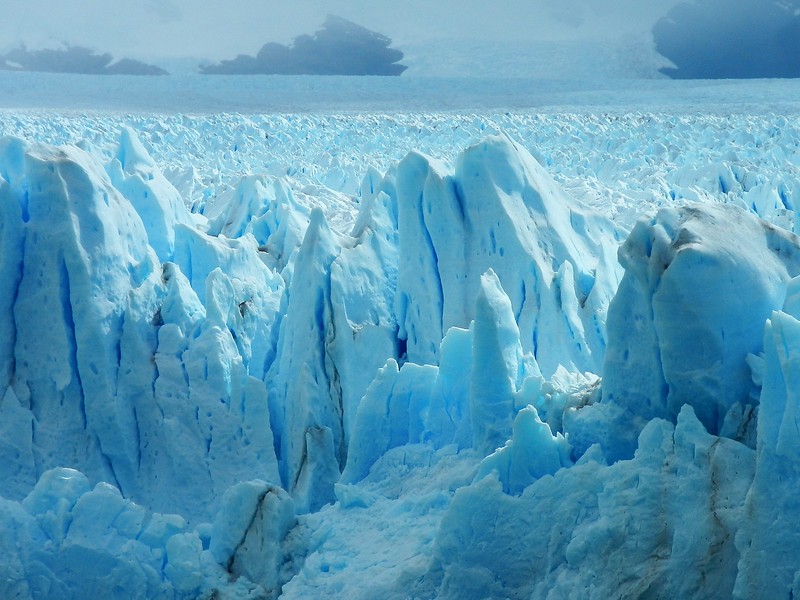 The boat tour was nice but we both enjoyed walking on boardwalks along the shore. These gave a better view and without the noise of the boat motors we could hear the creaking, groaning and loud cracking sounds the glaciers made. Some were so loud they sounded like gun shots going off.

The best thing was to just stay put and listen and watch, we saw some really big hunks of ice fall into the lake, awesome!

Next to where the boat loads was this rather large iceberg. I was surprised it was that close to the loading area, I thought maybe they push it in at night for the tourists.

You can see the ramp to the boat ramp. When we returned we were just off the ramp and the whole thing tipped over crashing into the water and sending rather large waves towards the boat and ramp. Here is an after picture, I was standing in almost the exact same spot.

Safety third I guess, people were a little freaked out to say the least.

Here is your bird picture of the day. The elusive black winged greater  grate clinger.

A nice lady on the boat took this picture of us. Cheese! 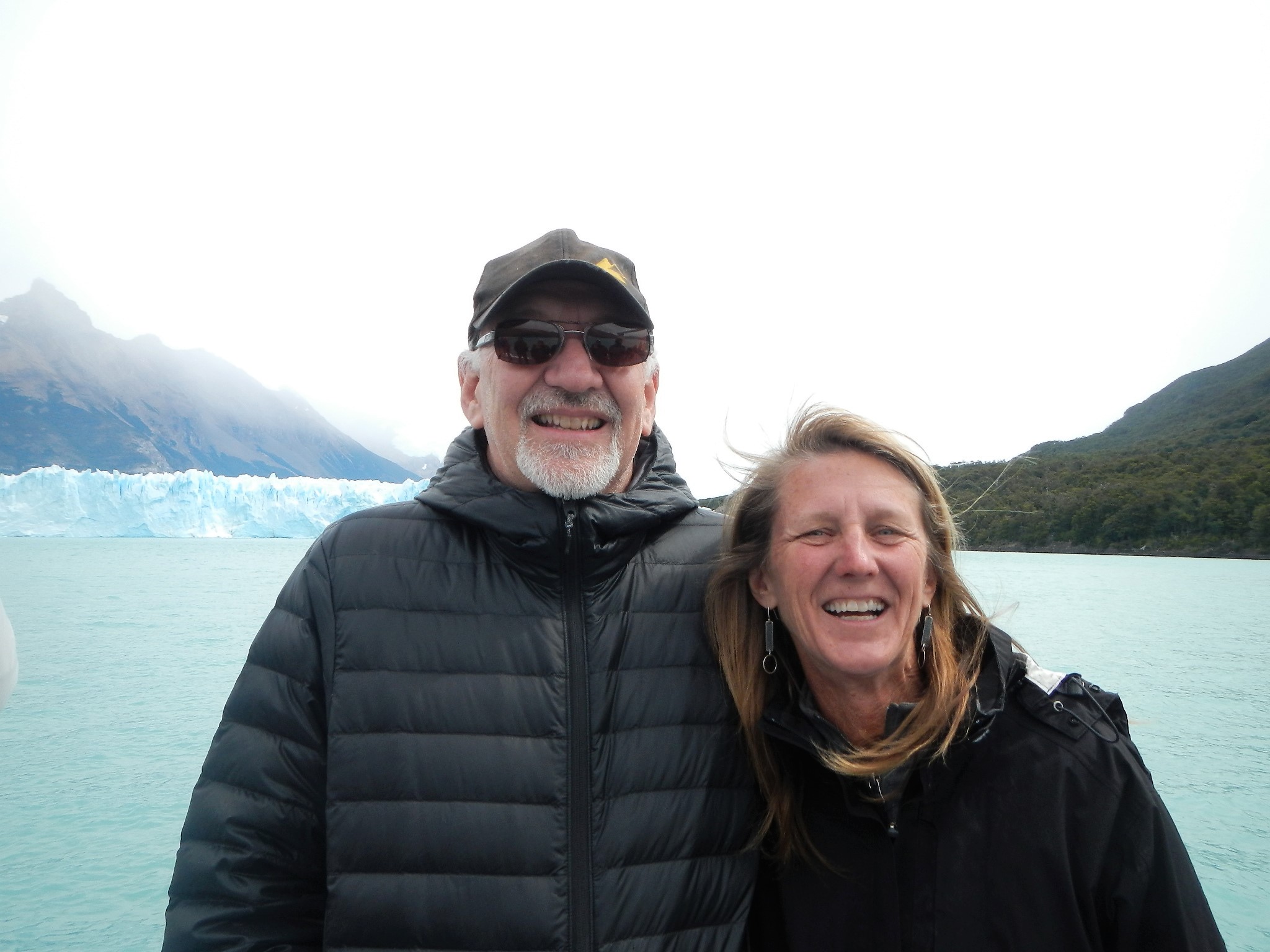 More to come as we attempt to make the final leg to the most southern point in the world.