We are slowly making our way west and south, the first few days after leaving Buenos Aires it was just HOT, near 100 degrees F. The terrain is flat and not much to really see or do except put on some miles.

I do like that motorcycles pass through the toll booths for free, just go around to the right and there is usually a small track for bikes. Obviously, they are made for smaller motos but we squeeze through. 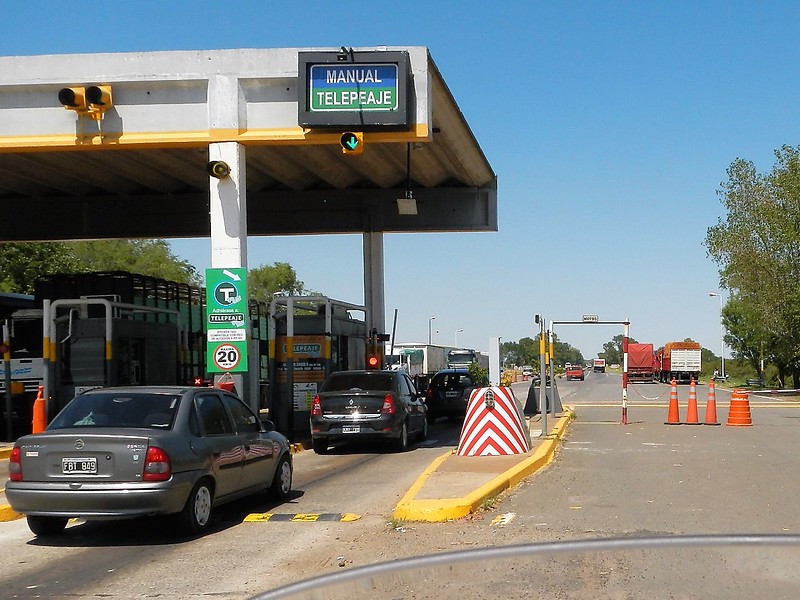 In true MotoRaid form we stopped at a gas station for lunch, this picture is for Dave, Keith, Michael and Jim. Yes, that is freezer ice-cream. Brought back memories…. 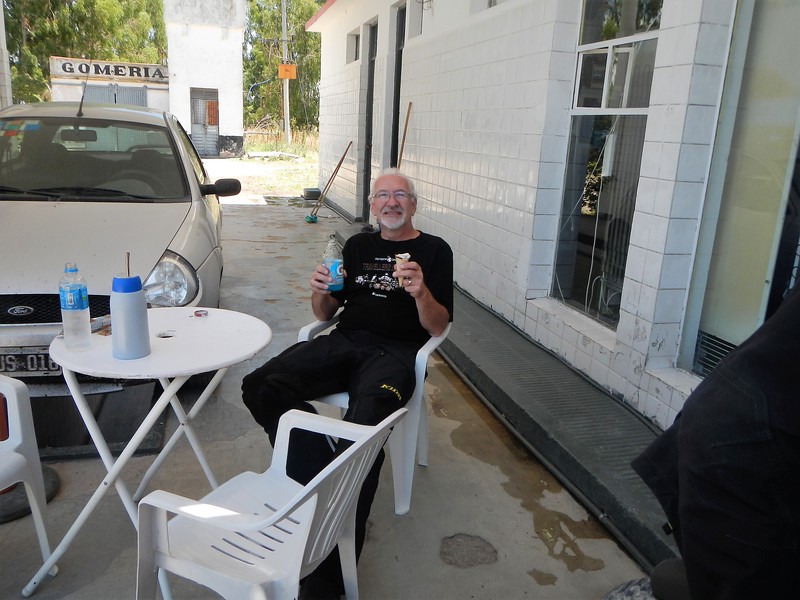 After a stay over in Azul we continued to Rio Colorado where we found a great B&B, La Maison. We had a great couple of days with our host.

Our Spanish was good enough to learn about her family (8 children) and the history of the place. Nice stay. She took a picture of us before leaving.

Did I mention it was hot? This was in the shade during a short water stop. 111 degrees, wow.

We met this woman at a gas stop, Gabby. She is yet another woman travelling solo in South America on a G650GS. This is the third woman solo motorcycle traveler we have come across. Now that I think of it – so far, it’s only been women travelers we have come across. 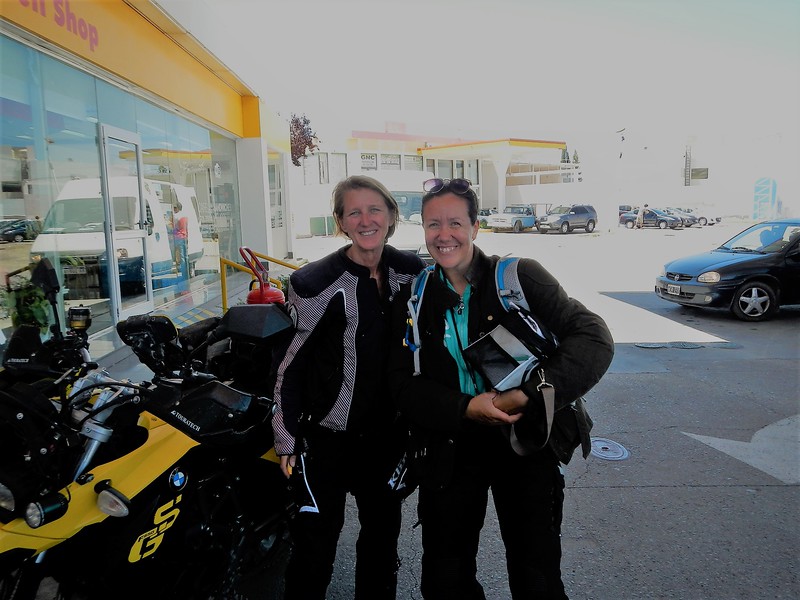 On the outskirts of Neuquen we came across this guy, juggling for spare change. It’s actually a nice change that people down here don’t just beg for money, they either entertain or try to sell something. So far we have supported people selling bandages, pens, flowers and yes, the juggler.

Nothing but the great wide open here….

Interesting; wide road and then a long narrow bridge. 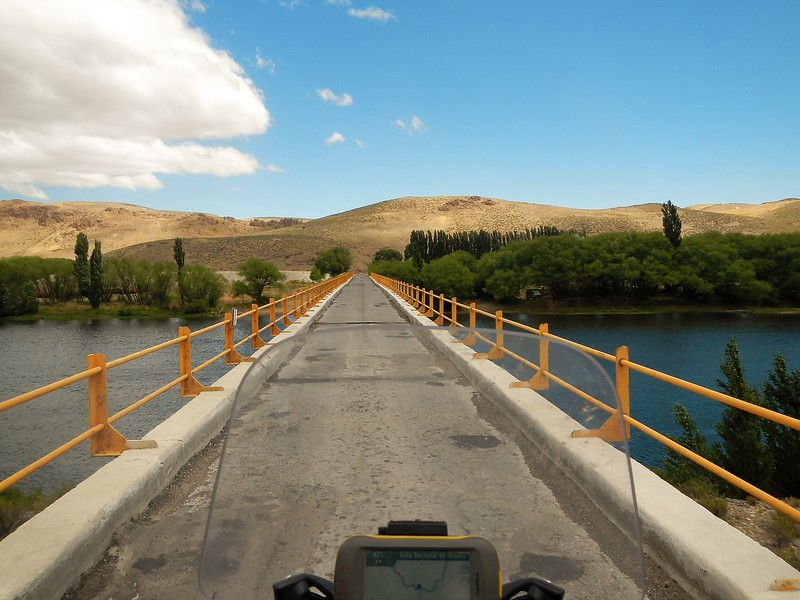 The further west the famous Patagonia wind started picking up. Had to hang on for most of the afternoon with 35 mph crosswinds. Yikes.

Finally we arrived in the resort/ski town of San Martin de los Andes. With the wind and elevation the temperatures finally dropped into the 70’s. Ahhhh, even cooler in the evenings. 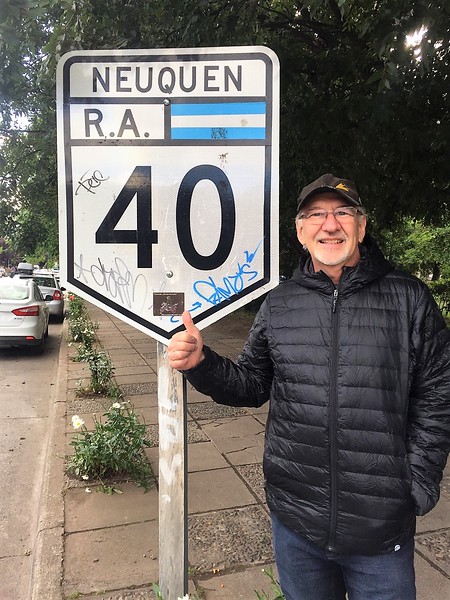 We checked into the Plaza Mayor Inn where we decided to hang out for a few days and explore the area. The owners are motorcycle people and we were given the private tour of their collection of newer and vintage motorcycles. Thanks Abel, Maxi, Mercedes and Lucas for all your hospitality.

Since we arrived on New Year’s eve we set out on our usual walkabout exploring the town. We came across something that smelled really good so we walked through a gate behind a building to find this.

We talked to the guy tending the fire in our broken Spanish and found out this was for a big party in the adjoining restaurant. Deby and I walked in to see if we could get a reservation. I’m pretty sure the answer was no, they were full for the night. Of course, Deby didn’t want to take no for an answer so she went into a really long explanation in her best Spanish as to why they should let us join them. After some time and discussions among the staff about what to do with the crazy gringo lady the told us to return at 9:00. At least I’m pretty sure that’s what they said.

We returned and sure enough they had a table for us…. ok, it was outside in the courtyard and everyone else was inside but there was a table. After a few minutes a couple other outside tables filled up so we weren’t the only ones who didn’t plan ahead for the big New Years Eve fiesta.  The courses started coming at 9:15 and continued all night, salad, meat, cheese, sweets, wine, …. on and on. They had it timed out perfect at midnight they brought out the desert plate and glasses of champagne. It took some time after that to decline the final pastries and ask for our bill. That was probably the longest I ever sat at a dinner table but it was fun.

For those who want to know the details we saw this on the window of the restaurant as we walked by the next day.

Yes, that says $850 per person. Wow! (Except that is in pesos… ) The restaurant was El Bodegon de los Andes.

We heard there was going to be a party in the main square so we walked over there at 1:00 in the morning, a really late night for us. People were just starting to arrive, I assume because all the restaurants were just finishing up their meals. 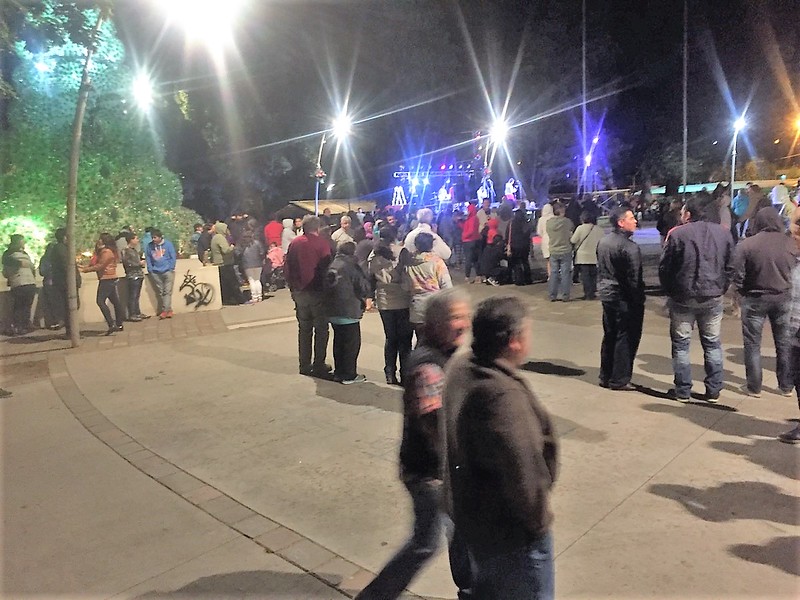 There was a stage and when we walked over we saw the drummer just starting to carry his drums to the stage. Not even a sign of the bass player so I knew there wasn’t going to be any music for a while. Deby and I walked around for a while checking out the festive atmosphere but by 1:30 decided to make the trek back to the hotel, our old age catching up with us.

The next day we went for a hike in the mountains and saw some of these birds. 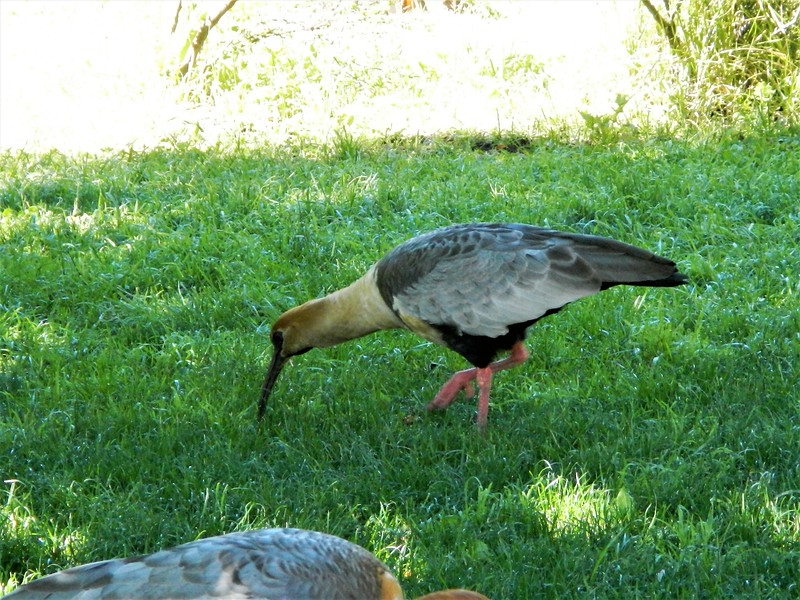 They must be popular here because later we came across this mural.

The hike was about 5 miles to a series of miradors’s, or viewpoints. I didn’t realize the most of the hike was steep climbing, but it was worth it.

Here is the view looking back into the valley that holds San Martin. 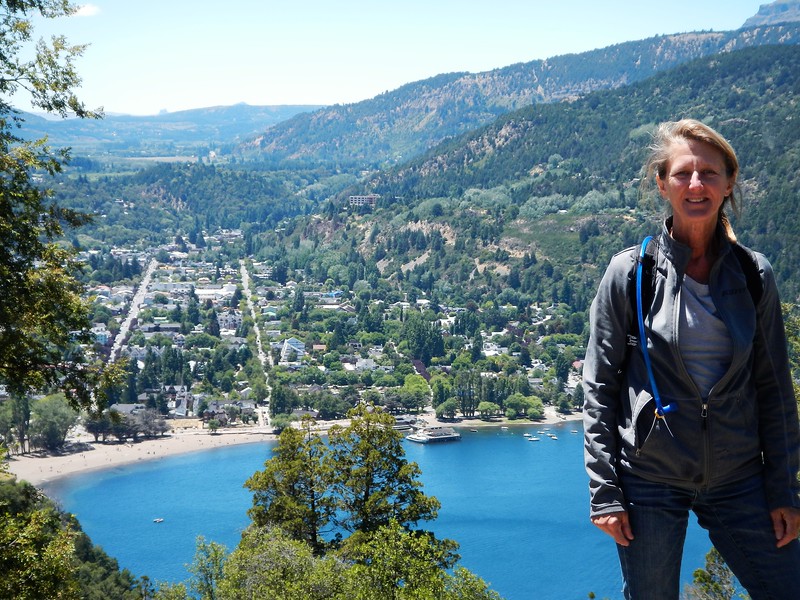 The land is actually on property belonging to the native people who live there. We had to pay 20 pesos at a gate to a most friendly person who seemed genuinely glad to have us there. The best two bucks yet on this trip. The native people are known for raising horses, we came across a few loose ones on the trail. 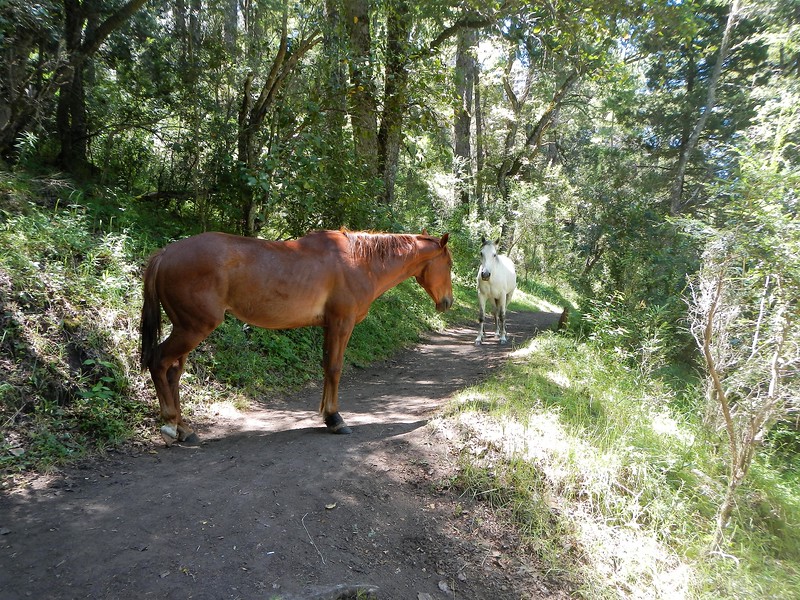 The next day we decided to go for a day ride into the Lanin National Park.  Click on the link, it’s pretty cool. This was our chance to get back our rusty off road riding skills. The roads were easy gravel.

This is one of my favorite pictures, nice switchbacks and pretty girl in my rear view mirror. 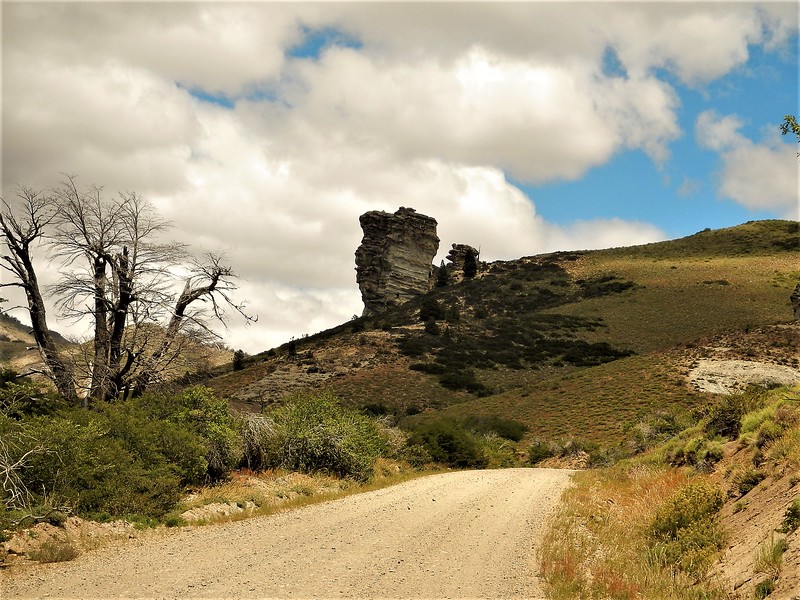 I think that most people that visit this part of Argentina just blast down ruta 40 and skip this park. Too bad because the route we took actually parallels the 7 lakes route and makes a nice side trip. Because it was a day trip for us we could make a loop and ride both roads.

We stopped at this place for lunch and learned it is owned by a gringo from Seattle. He wasn’t there but they told us he was a long haired musician and left the rat race to move here in the middle of nowhere. 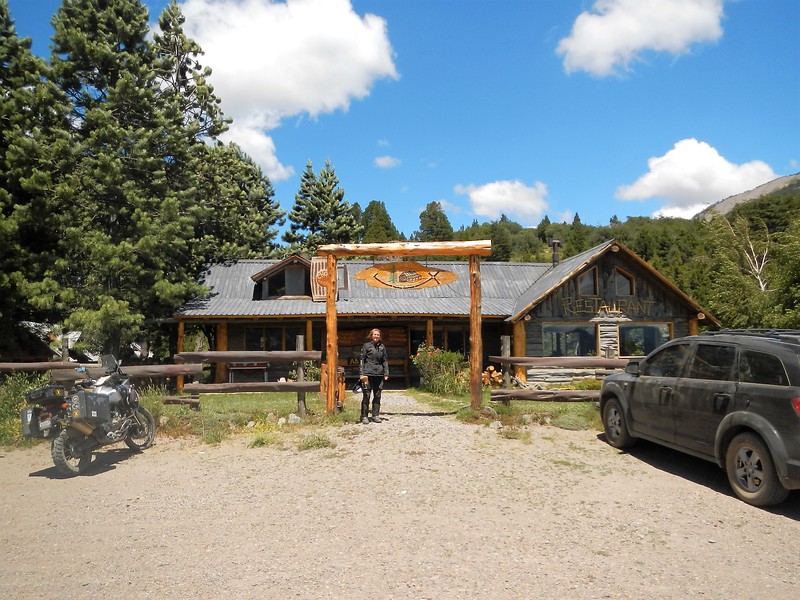 The lunch was good, cured ham and cheese on homemade bread. Deby wanted a picture of our “plates” which were wood planks. 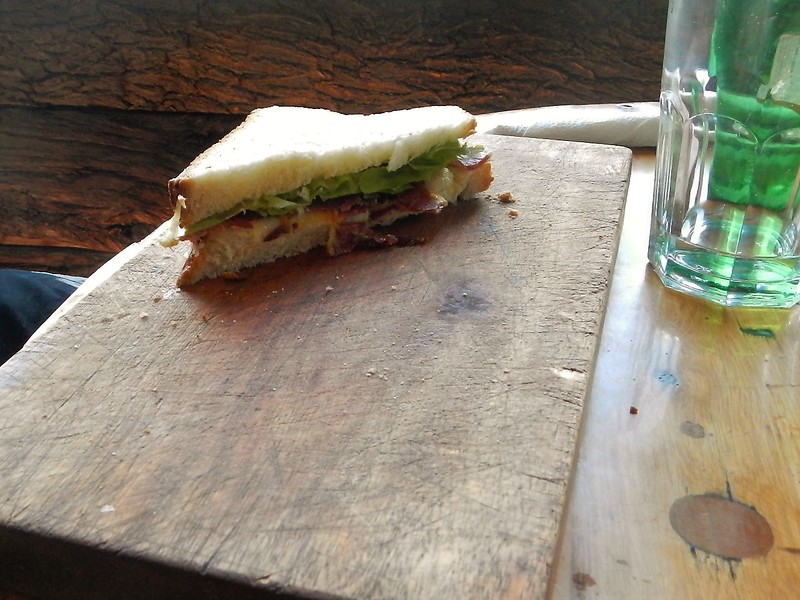 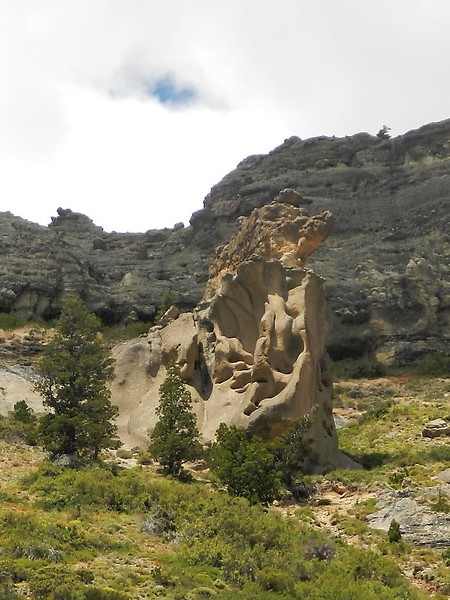 I like this picture. It was nice riding the bikes when they were not so loaded down.

I love the winding road in the distance, what a fun day. 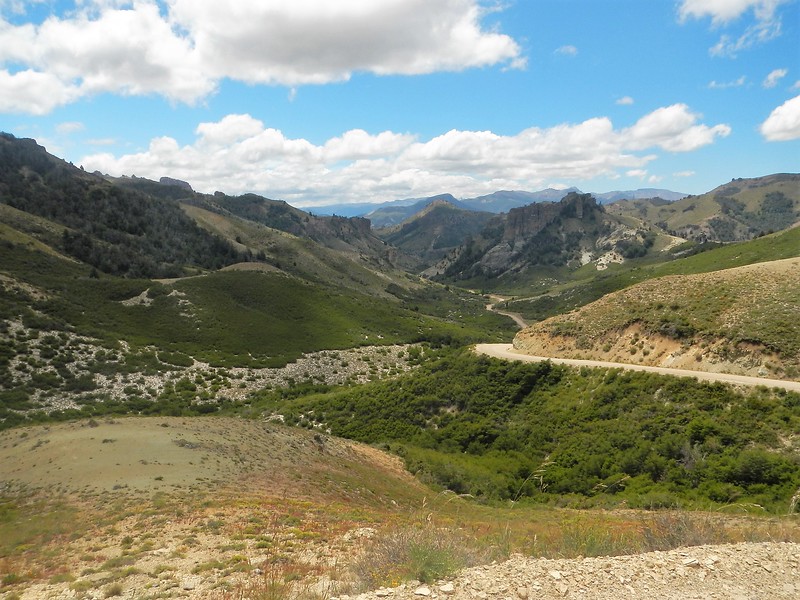 We probably crossed a half dozen of these bridges, some better and some worse than this one. 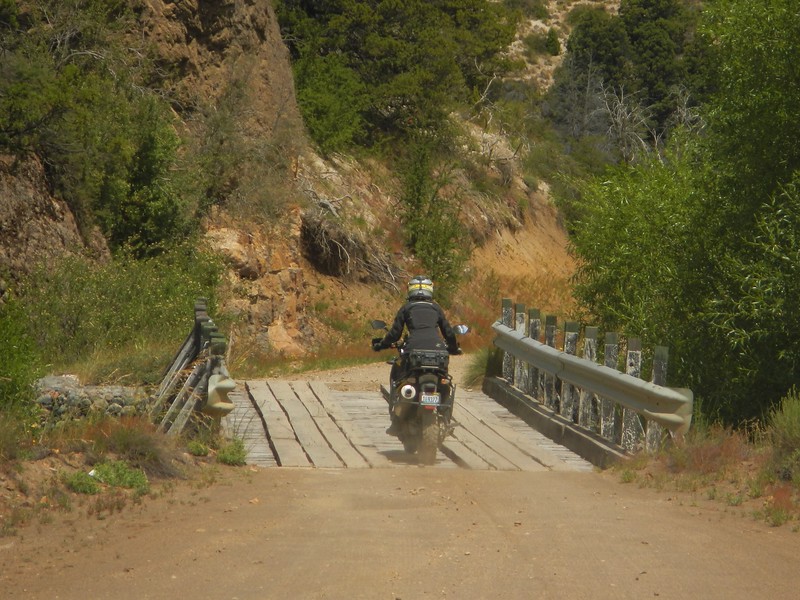 So we are still in San Martin, we thought about leaving today but the forecast called for rain all day so we decided to stay put. Yes, the weather is changing and getting much cooler. Here is a snapshot of the temperatures. 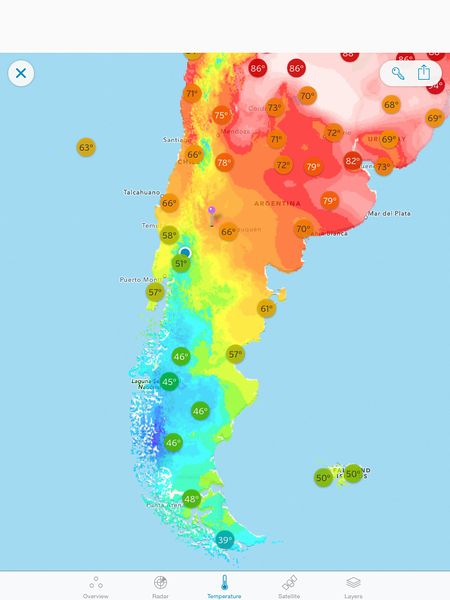 Our location on the map is the blue dot about in the middle f the map. Cooler to the south for sure, still hot in the upper right.

Hopefully I can get some more frequent updates.

Having fun: Donn and Deby