I’ve learned that in the remote southern reaches of Patagonia access to the internet is a luxury and certainly not a necessity.  We’ve just spent a series of nights in hotels that claim to have internet access only to find it’s actually not existent or very limited. Finally we are in a a bigger city with good access for uploading pictures and getting caught up. Thanks for not giving up on us!

Ushuaia is an interesting place, more in a curious way than an actual place of interest. It’s a city still finding itself and growing faster than the infrastructure can keep up. New construction is everywhere, hotels tend to full up and are expensive and except for the few main roads the side roads are all gravel resulting in a constant haze of dust over the cities neighborhoods. Ushuaia is the launch point for antarctic expeditions, a stop for a number of cruise ships, a destination for endless youth hitchhiking through Patagonia, a destination for long distance bicycle riders (those guys are crazy) and finally, sort of a bucket list stop for Adventure Motorcycle Riders. That would be us.

Thanks to Booking.com we found a last minute hotel and booked two nights at an inflated rate but competitive for the area and time of year. So long as we came all this way we learned that the most touristy thing to do is an all day cruise to go see the penguins. It was way cheaper than a cruise to the antarctic and probably we would get the general idea of being at a storm tossed ship for hours on end, we did.

Needless to say we eventually arrived at the penguins after a few hours navigating the Beagle Channel. Click on the link to read more about the Beagle Channel, interesting stuff that I don’t need to repeat here. I know you are dying to see pictures of these cute little guys so I’ll show a few here.

The boat was a large catamaran that I assume was used for stability in the usually rough seas of the Beagle Channel. I was wondering how close the boat would get to the island with the penguins and was surprised when they just rammed the beach! The penguins went scattering but soon came back with curious looks for the tourists. Hey… is that you taking my picture??

You can tell these are smaller than the ones in antarctic, I’m sure there is a good reason for that and since Darwin himself has visited here it’s probably in some of his writings. 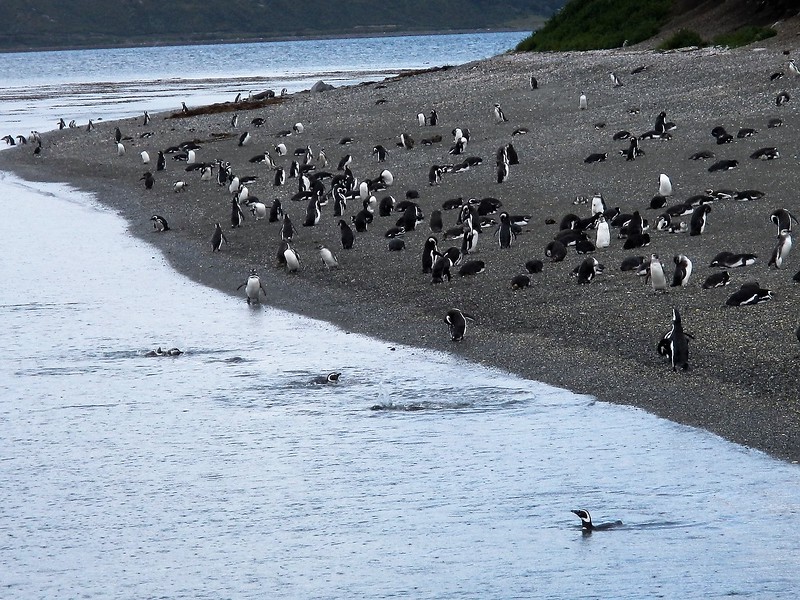 They were everywhere.  About the time we were getting ready to go some dark clouds were forming.

And sure enough after bit the tiny ship was tossed… if not for the courage of the fearless crew….. geesh, did I really just type that?

We had almost two hours in high seas back to port. Amazingly Deby slept through it while I watched the second story forward window getting sprayed. Crazy.

Friday the 13th hummm, worried. No, tried not to think about it. We were up early and riding north. The day started out sunny with temps in the 40’s, cool but dry. That didn’t last long by the time we reached Rio Grande it was raining and the wind was picking up. Buy the time we reached the first boarder crossing into the little corner of Chile we needed to traverse it was getting so cold I thought for sure I saw snow flakes, I’m pretty sure I did. We were expecting a relatively quick border crossing like we had on our way down. Not to be this time.

We got in line behind about 100 people when the lights went out. What the? Eventually word got around in English that the Chilean workers had called for a work stoppage, a strike. When would we get going? Nobody knew. Thankfully we had progressed up the line enough  to be out of the rain that I thought for sure felt like snow, so we waited.

Good news, after an hour the strike was over and we made our way through the line. At three o’clock in the after noon we crossed the boarder, in the rain onto a long gravel section with 200 miles to our destination.

By 4:30 we’re at the ferry crossing at the Straights of Magellan, remember that from a few blog posts back? We were stuck by high winds? Well, I didn’t expect a problem this time. We were told the ferry ran every half hour so we arrived and saw we just missed one of the ferries we didn’t worry to much, we could see the other one coming. Until it stopped. What? We waited and nothing, it just sat in the channel. No word, no workers nothing. There was about 10 motorcycles waiting with us and we all struck up conversations in various languages. Eventually we learned the tide was too low. We would have to wait for the tide to come in, maybe a few hours.

It was cold and wet….. eventually we gave up sitting on our bikes and searched somewhere warm from the rain. The tour bus was blocking the increasing wind and most of the rain so we stood next to it. I suppose it would have been neighborly if they would have invited the muddy, wet bikers IN the bus but no….

The engine was running to keep the passengers warm and dry, we took turns near the engine which gave off some warmth.

It also gave off some nasty fumes so whenever we got too lightheaded we rotated out.  We met this guy who was from Poland. Super interesting.

He spoke English with a British accent and sounded and looked like Bert Monroe, the guy from the World’s Fastest Indian movie. Amazing. He said he’s been travelling all over the world for decades. We had a great time chatting. Finally, he was sick of it and said he was riding back 30 KM to a hostel he saw so we waved goodbye. A few minutes later he was back. Did we know there was a restaurant just a KM back?  What? We’ve been standing in the rain for hours and there was food and warmth just around the corner? All the bikers jumped on their bikes and we were gone.

Here we are with Deby next to the wood fire! We had the best cheese sandwiches ever. Around 8:00 PM we looked out the window and saw the ferry moving, we paid our bills and ran into the rain to beat the line of traffic onto the ferry. Just as we were getting ready to load this guy pulled up. I was miffed that he didn’t have to wait and a little amazed that a Harley made it on the rough gravel road. Impressive…. I suppose.

At least it was a smoother crossing this time.

Seriously, is this Burt Munro  (well actually Anthony Hopkins who played him) or what?

Well, enough of all that….

Past the second border crossing at 9:30 PM, still raining, and into Rio Gallegos at 10:30, with my low gas light burning brightly. Hotel 1 – no, hotel – 2 Yes! Exhausted we checked into the Patagonia Hotel like a couple of wet muddy rats. It’s amazing they let us into these nice places. Although, the other day we were asked (nicely) not to put our stuff on the white linens. 🙂

Ok, this is good place to stop. Much more to come.

4 thoughts on “Penguins – Then the start of the ride home”