Fin del Mundo. Not a political statement, not the second coming, no, just Fin del Mundo, is what they call it here. The end of the world. The most southern most road in the world and we made it to the end. It is a loooonnnng way down, trust me.

Fresh from a day off the bikes we headed south from El Calafate to the end of the world. I knew it would be two days, I didn’t know how long those days would be. Good thing it stays light out until 10:30PM.

Right away it was windy, a strong cross wind from the right had our bikes tilted over on what seemed like a 45 degree angle. I will say it was beautiful scenery see the wind in this picture? 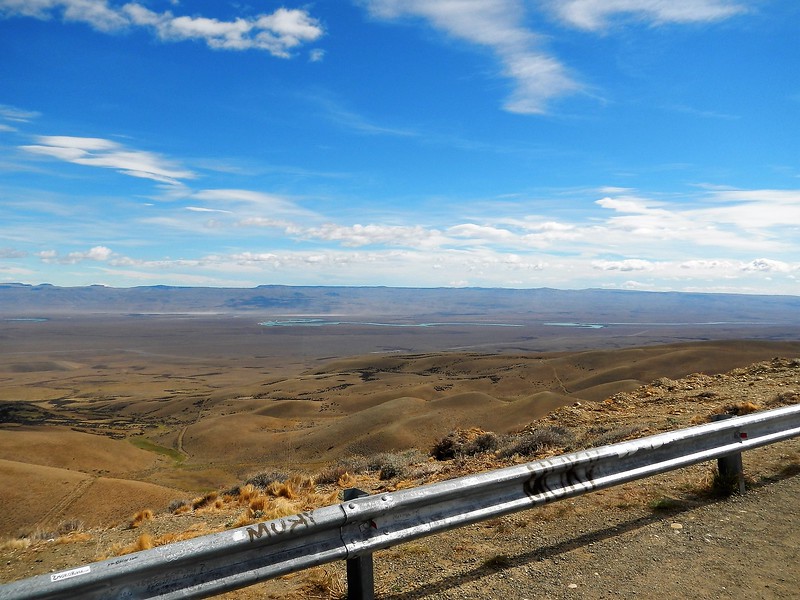 Maybe a turn to the right will give the idea…. 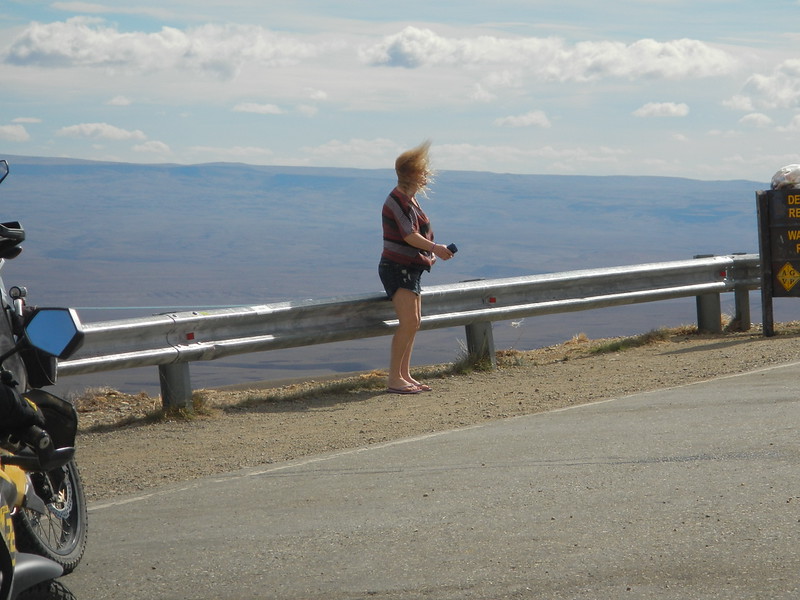 Nothing to do about it so we rode. Seriously, the wind was so strong we couldn’t stop along the road without getting blown over, it was that bad. Pee stop? Forget it, need to plan ahead because it is impossible to get off the bikes.

Here is a map of our route, according to my GPS is was 431 miles with an elapsed time of 14 hours and 37 minutes. Hmmm, didn’t expect that but here is the story…

It’s a little hard to see on this map but as the road cuts south the route cuts through a little section of Chile and then crosses an inlet. All of that took some time. The boarder crossings here are much more organized than in Central America but still take some time. All was well until we got to the ferry crossing the Straights of Magellan. Cool, the famous southern most passage from the Atlantic to Pacific sometimes known as “The Dragon’s Tail.” Click on the link to read more, interesting stuff. When we arrived the dragon was breathing in full force, the wind was so strong that guess what…. even in this part of the world where strong winds are normal the wind was too strong for the ferries to run. We arrived at 3:00 and just waited. Fortunately motorcycles always skip to the front of the line and after passing a mile or so of parked cars we parked in with a group of about 20 motorcycles experiencing the same fate.

Glad to be in the front of the line. 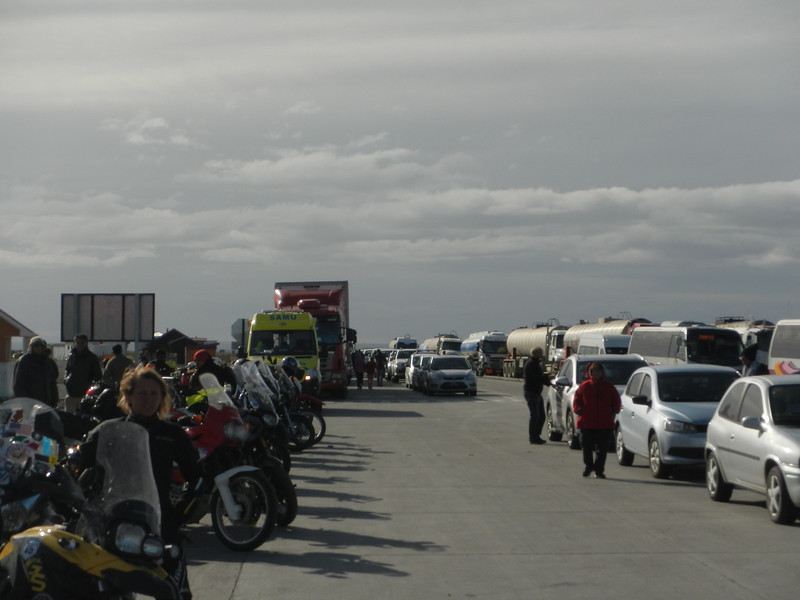 This guy was in line with his ubiquitous Honda 250, he had the best points for pannier style with these handmade leather bags. 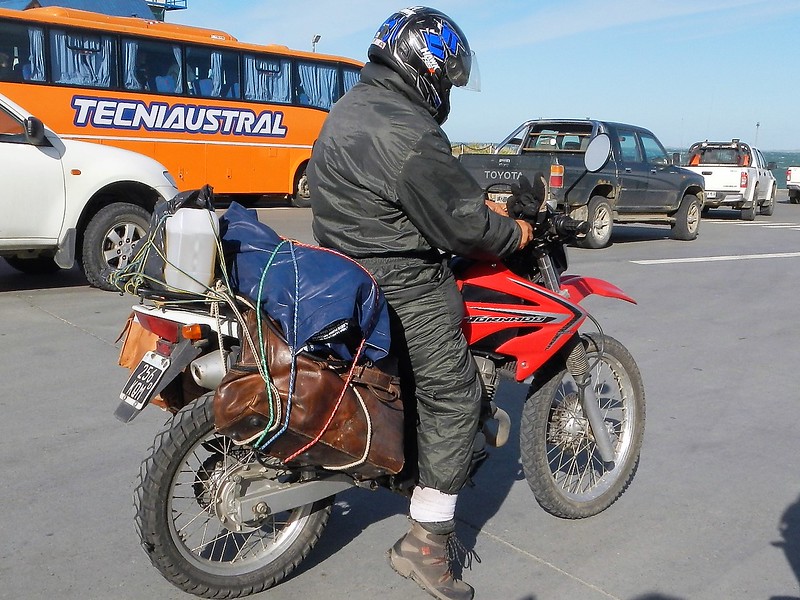 Our new best friends for Mexico on the loaded V-Strom! 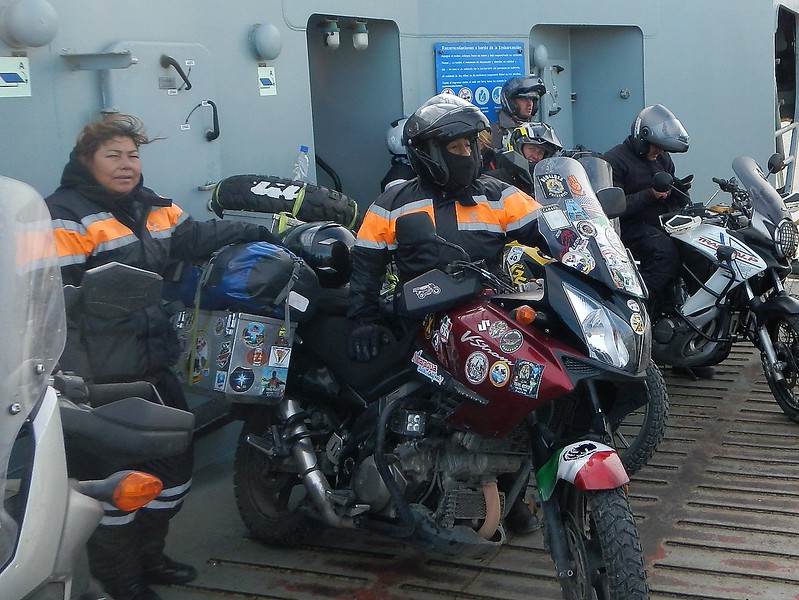 Finally after about 4 hours, at 7:00 PM the ferry arrived, as far as I could tell the wind hand not let up at all but it seemed like we were going for it. 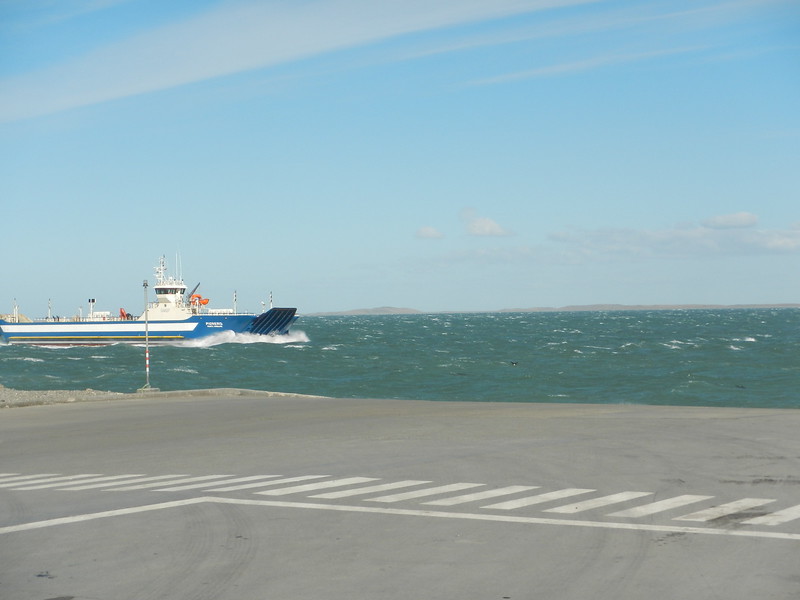 We loaded and started our crossing, the waves were insane. It was imperative that we held onto our bikes or they would just crash over. At one point I had to go inside to pay our passage and had to enlist two guys to hold on to my bike, they thought it was hilarious. 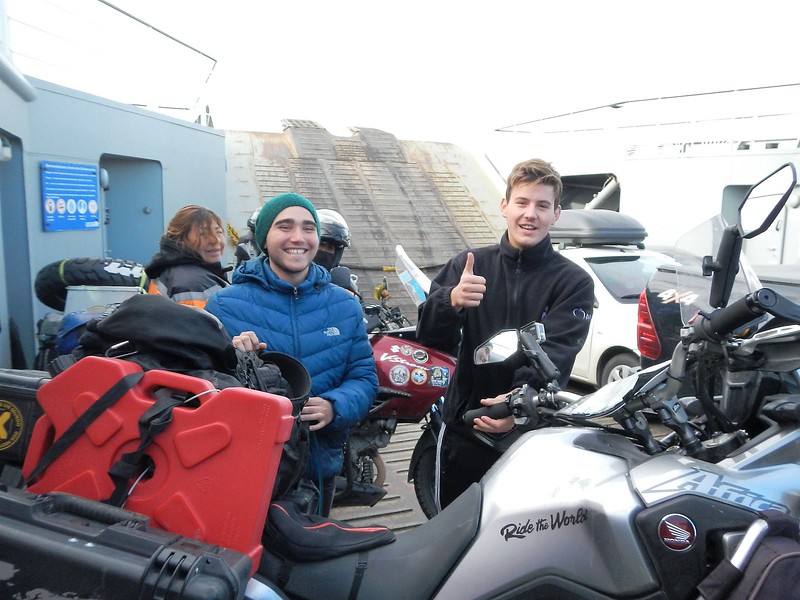 Took this picture out the window when I went to pay. 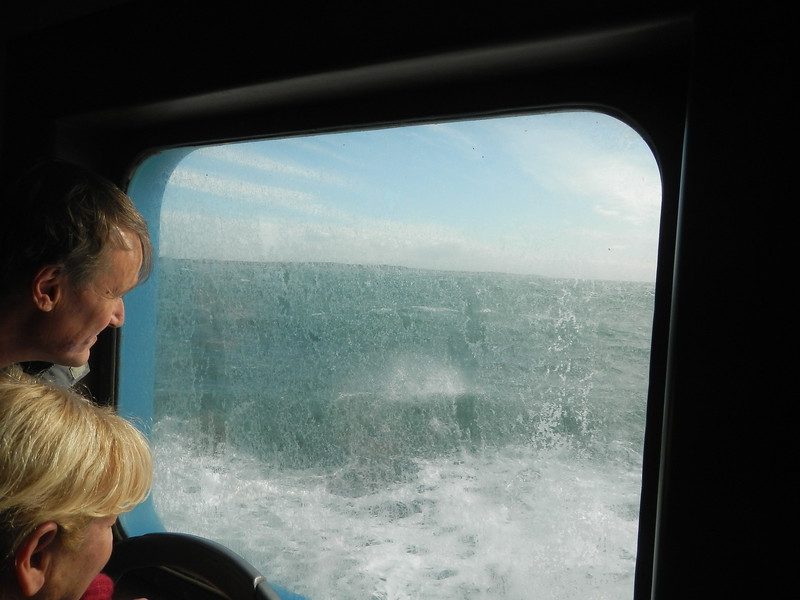 Here is a short video, sort of gives some perspective. The hallway is where I had to wait in the tossing ship to pay our fare.

Once across we just hit it for the border crossing, after about another 2 hours of high wind riding the road cut due east and the pavement ended. Now it was getting late, my gas light came on and we were back on the loose gravel. Finally as it was getting dark we came to the second border crossing. Thankfully there was a gas station just beyond the crossing. 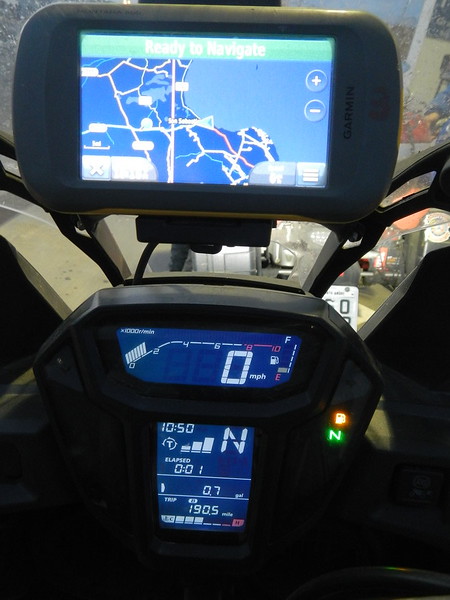 I took this picture, 10:50 PM, 190 miles since gas, the gas gauge at empty and the gas light on. This was starting to get to be the normal routine. An hour later we were into the city of Rio Grande, exhausted and looking for a hotel. Same deal, hotel 1- full, hotel – 2 full, finally sent to hotel 3, the Grand Hotel and they had a room. Expensive but didn’t care, nice to have a good bed after a long day.

Not too early we were off for the final push to the end of the world. The road started out flat and boring  with wind but more normal (maybe we are getting used to riding sideways). Closer to Ushuaia we come into a mountain range and the road get’s interesting.

Still too windy to stop we keep riding until we get to the famous Ushuaia sign and the entrance o the city. Burrr, cold and sideways wind but we made it! 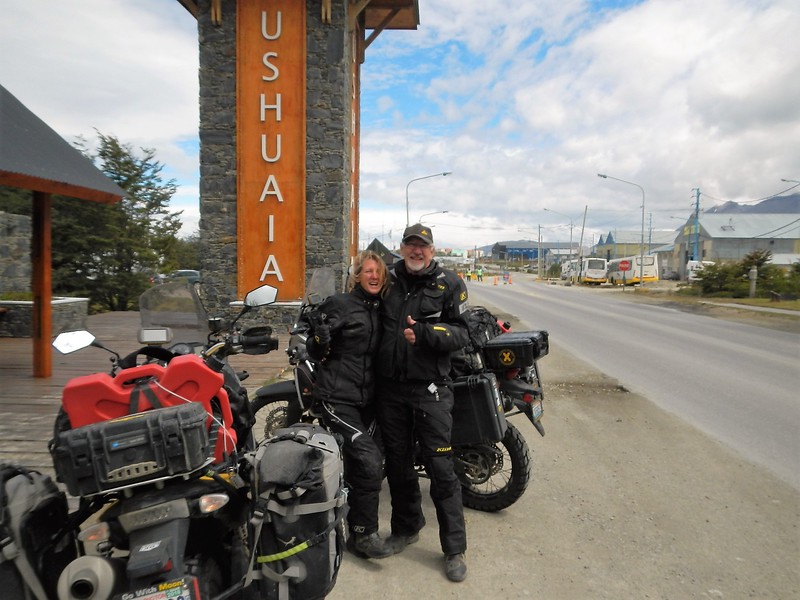 Whooo hoooo. Off we went to check into our hotel, Hosteria Mi Vida. A nice place we found online. Hotels are expensive and in short supply so we were glad to find this place on the edge of town.

We still had some hours of daylight and since we are used to riding into the night we decided to get back on the bikes. We had one more thing to do….. The road continues and we wanted to ride the famous Ruta 3 all the way to the true end, the farthest south someone can go on a motor vehicle. It was only about 20Km more so off we went.

We rode into the national park and meet two riders from Poland, nice guys. I gave them my camera and asked one of them to take our picture at the end of the end of the road. My Polish must not very good because the other guy thought I wanted him in the picture, oh well. Good photo bomb.

A momentous occasion for sure. I expected some kind of landmark, sign, something significant but alas, only the small sign you see next to me…. don’t sit on the fence.

I turned to Deby and said, “that’s it – I’ve had enough with trip, I’m turning around and going home!”

13 thoughts on “The End of the World”