We were told it would happen when we cross into Chile, we trade the windy dry plains of Argentina for the damp drippy lush forests of southern Chile. On Wednesday January 18th we left Puerto Tranquilo to venture north on the famed Ruta 7 the Carretera Austral or Southern Road. I realize now I didn’t really take many pictures. In a lot of ways it really reminded me of the Mountain Loop Highway in Washington. My WA friends are all familiar with that ride, well maintained gravel through woods of tall trees, with the dust held down by the typical damp northwest misty rain. That’s what it was like. One main difference was these HUGE Gunnera plants that were everywhere along the road.

Sometime in mid day we came to a construction stop. In typical form down here we rode to the front of the line. We were in the middle of nowhere and this road is closed. If you look close at the sign on the left it says closed from 13:00 to 17:00. That would be from 1PM to 5PM. Wow, the line of cars had been waiting that long, all perfectly normal. Fortunately we arrived about 3:30 and only waited for about one and a half hours. It was raining but not really very hard and it was cool but not really very cool. We stood around with our helmets and jackets on and had on and off conversations with the people in cars. They all want to know the same things: Where are we from, where are we going and how big is the motor in the motorcycle. Now whenever we get asked a question we don’t understand in Spanish we just reply with those answers one at a time and it works great! 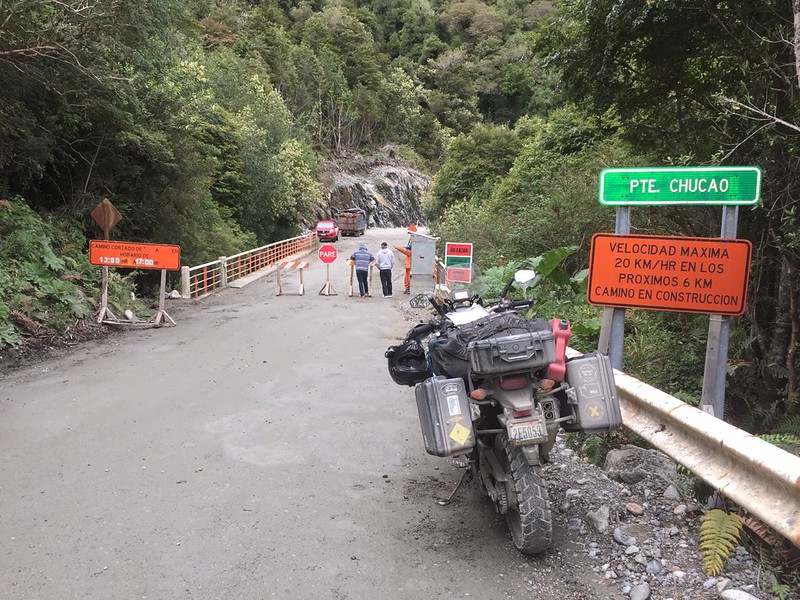 It ended up being good riding but lots of construction stops and dodging big construction vehicles. The thing down here is that they let you go one lane at a time but you are totally responsible to avoid all the machinery in the road. At one check point we came to a line of cars and rode to the front to talk the the flagger guy. He looked at the bikes and told us we could go ahead because we could dodge the excavators and bull dozers easier than a car, I’m pretty sure that’s what he said so we went while the cars stayed behind. By this point it had been raining all day and the construction zone was mostly mud which can be very slippery on motorcycles. We were on our pegs and at full attention as we weaved around the various construction vehicles, trucks, people and the occasional cow. Now I remember why I didn’t stop to take pictures or attempt any while riding.

According to my GPS is was 282 miles and almost 10 hours later when we found a place to stop for the night. Not that we were trying to make good time but seriously, there just wasn’t many places to stop. Out of the corner of my eye I saw a sign for a lodge so slowing down as fast as I dared in the mud we made the turnoff into some random place. This happens a lot, we never know what we are getting ourselves into and hope for the best. We lucked out biggly this time. The narrow gravel driveway took us past some nice looking cabins and then to the main lodge. I’m thinking this has potential.

I keep asking myself…. are we back in Oregon or Washington? This could easily be the Olympic Peninsula. Tired, wet and hungry we approach the lobby, we hope they have room because the thought of putting on our wet helmets and going who knows how much further is not very appealing. A German fellow with pretty decent English greets us and says YES they have one cabin left if we don’t mind two single beds. We jumped on it. I figured our marriage could survive one night of sleeping apart if we’ve managed this trip so far. It is called the El Pangue Lodge, click on the name for the website.

The restaurant opened at 8:30 and wow was it fantastic. Of course, we were so hungry anything would have tasted good. I had smoked Salmon, they smoke it themselves at the lodge. All the food was local and fresh. I snuck a picture.

We were pretty happy people oh yea. We went for a short stroll in the morning and took another picture of the huge gunnera plants.

Free range sheep wandered around the cabins, Deby wanted to pet them but we couldn’t get close.

Thursday January 19th we purposely had a late start after enjoying a great breakfast with homemade bread and jams. Knowing that Americans want their eggs, someone in the kitchen whipped up some scrambled ones for us. Nice.

Finally back on the bikes in the damp and light rain. At least it wasn’t too cold, just like typical Seattle weather, 50’s and 60’s. It was actually quite nice. It ended up being a short day, only 100 miles. At the last minute I thought to ask our German host about the ferries we would need to take on our route north. He informed we needed to stop at the small town of Chaiten to by the ferry tickets and then ride 50 more kilometers to the ferry. Good thing I asked or we would have been at the ferry without tickets. We arrived at Chaiten about 2:30 and stumbled around town looking for the ferry ticket office. When we got there after some waiting we had an animated conversation with the ticket lady about our needs. Eventually with hand waving, terrible Spanish and map pointing we found out the ferry didn’t leave until 11:00 AM the next day and we needed to be at the dock an hour early. I bought tickets and got back on the bikes looking for lodging.

The city seemed just a little strange, very small with what seemed like a lot of building projects. Most of the lodging was questionable looking hostels that catered to the backpacking/hitchhiking crowd that were ubiquitous along the road. Eventually I looked up at the top of a hill was a huge sign HOTEL so we rode a steep loose gravel road to check it out, once again wondering what we would find. It wasn’t as good as the lodge the previous night but adequate….. It did have a nice view from the patio of the city.

One thing that was odd was the waterfront. The water was way, way, way out. It seemed further out than would be reasonable for a low tide. It just seemed strange. Checking into our room they gave us a WiFi password but it was not to be. The WiFi was down, a common thing in this area. We were told of a restaurant nearby so ended up there for a early dinner and a friend of the owner came over to chat in pretty good English. A little concerned that we would be spending a long evening in this town with nothing to do I asked about the city and what was up with the waterfront? That’s when it got interesting….

Little did we know but the nearby volcano had a major eruption in 2008 and besides causing major damage totally rerouted the river and pushed it away from the city. Wow. And 2008 was not that long ago. Oh, the volcano was still smoking! It’s worth it to read about it HERE on Wikipedia.  But wait there’s more……. there was a part of town only a few blocks away where the debris covered some houses that were left as a memorial to the event. And…. in the piles of rocks spewed from the mountain were obsidian rocks. What?? Deby was suddenly 100% attentive. You mean we can go there and just pick up obsidian? Yes. Ten minutes later we were hoofing it to the re-routed river and rock piles. We were not disappointed. 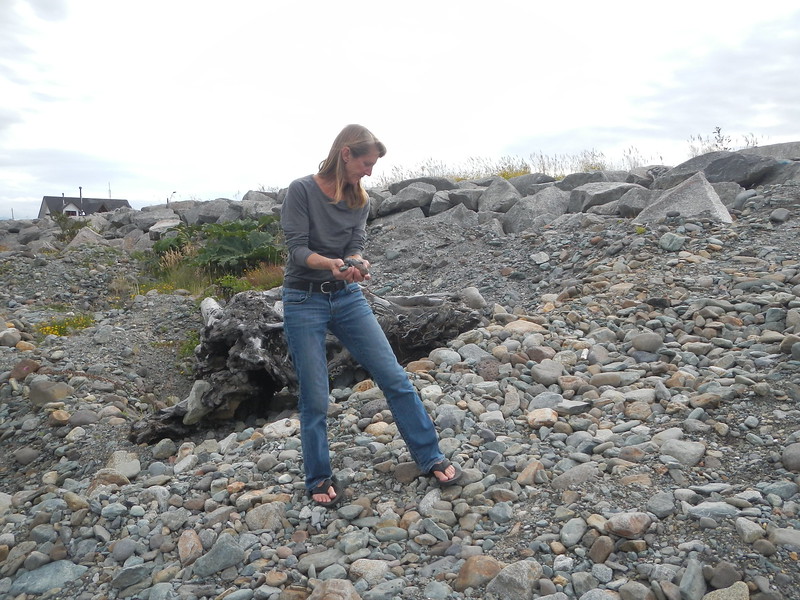 Now we have even more rocks in Deby’s panniers. (Donn… why is my bike so heavy?)

Here is a picture of one of the destroyed houses.

And of all crazy things one of the buildings was an old prison.

I felt like I was reliving my youth exploring the cells and hallways of the abandoned prison.

It ended up being a great stay in the small town of Chaiten.

I’m going to stop this one here and get going on the next. Off and on the Chilean ferry system. Thanks for following and for all the comments. Sorry we don’t always have good enough internet to reply but we love reading them. I do hope to get some reply’s in soon.

6 thoughts on “Trading Wind for Rain”