We knew it was going to be another hot one so we worked on getting an early start to our day. Fortunately the Posada del Olivia had breakfast waiting in the restaurant, coffee check…. bread, check… umm ham, check… cheese, check. Ok, whatever ham and cheese again. Anxious to go we were on the bikes by 9:10 AM and the plan was to follow the exact route we had ridden in 2013 on the MotoRaid II trip going from North to South. Certainly some nice roads.

And the further north we went we started seeing these giant cacti. We thought it was strange to be seeing so many cacti in areas surrounded by green vegetation. I didn’t get any pictures but further north a number of them were in full bloom. Weird seeing a big white flower on top of a cactus.

Our log for the day was 303 miles over 9 hours. Nice, pleasant but nothing spectacular to report on Ruta 40. We were climbing ever higher into the foothills of the Andes, the highest point on the route was 7,000 feet and Calafayte is at 5,000. A good place to acclimate to the elevation.

Ready for a rest I found what again looked like a good hotel on booking.com and booked two nights. We hoped to cool down, recharge and maybe get a blog post out after days without any internet access. This time we struck pay dirt with the Hotel Villa Vicuna. Nice place with an inner courtyard next to our room, and the motorcycles securely parked about 20 feet away in a covered driveway. A good place for some R&R, which turned out to be true…. except the internet wasn’t working. No reason why. And for some strange reason the data connection on my phone didn’t work in the city either. Darn, what to do? Nothing… chill, read a book, eat a cow.

Here is Deby outside our room cooling off with a cold cerveza. Oh, ohhh, is that a Budweiser? The horror, but you take what you can get. So long as I’m on the subject we are also becoming accustomed to instant coffee. It seems to go well with ham and cheese. 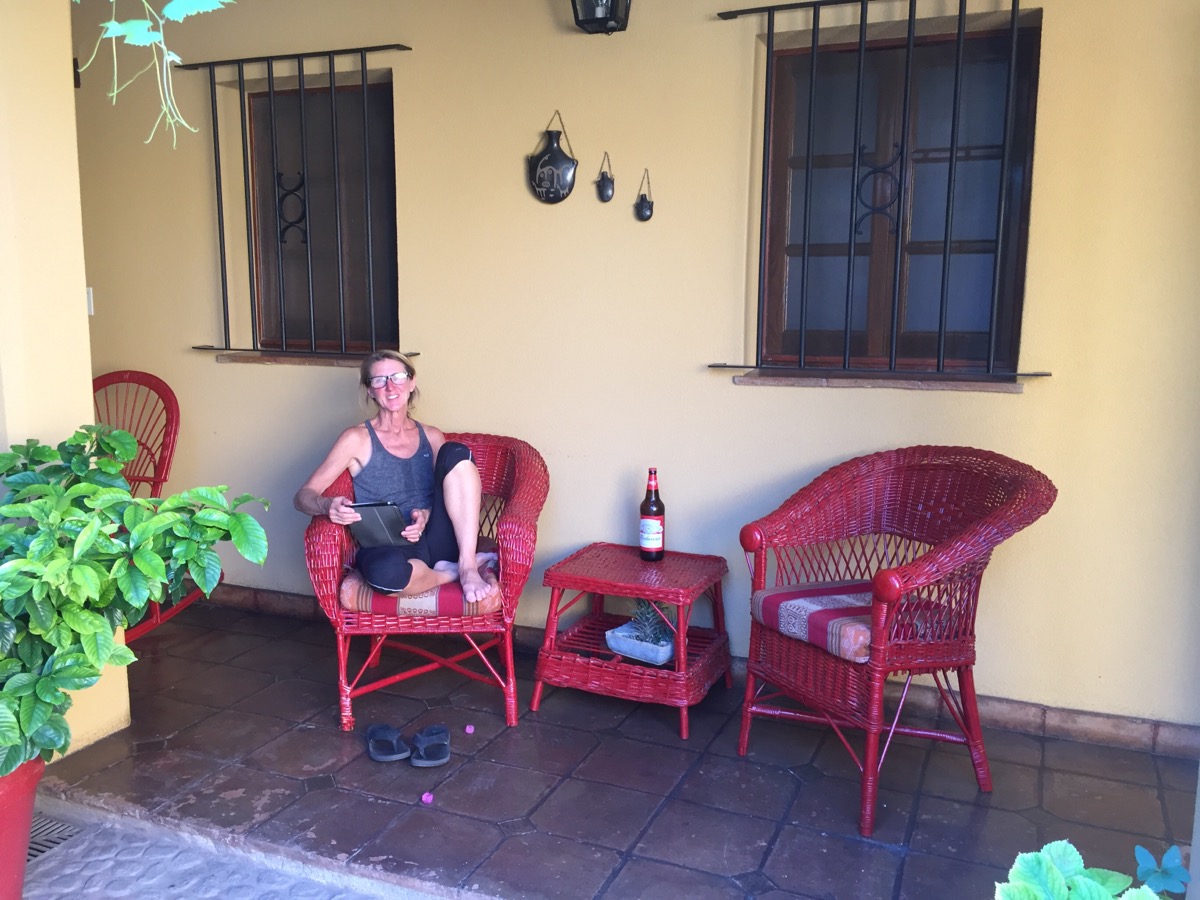 Nothing all day but this did happen……um, in case you can’t tell, that’s not Deby.

It started with this.

You get your money’s worth of red wine in Calafayte.

We were at an outdoor cafe on the main square a short walk from the hotel where we waited until a fashionably late enough time to grab a table. We were still early but at least there were some other people there, turns out they were tourists from France. Halfway through our meal a guitar player started entertaining the increasing patrons and next some traditional Argentinian dancers came out to perform a dance that involved really a lot of fancy footwork and quite entertaining. Below is a clip from YouTube as an example.

Next thing I know it’s audience participation time. All in Spanish I concluded that they told the crowd this was actually quite easy and they could teach anybody. Were there any volunteers? Of course, they quite possibly said this is so easy that they could teach even a dumb gringo who doesn’t even know the language.  Either way the result was the same, before I knew it I was in front of an every larger audience learning this foot stomping traditional dance while Deby was laughing and taking pictures.

The whole time the Frank Zappa lyrics to Dancing Fool are running through my mind. I think I was getting the moves!

Finally the big finale and thunderous applause. When I get home I’ll be taking the show to a Argentinian bar near you.

That’s all I remember from Monday other than I seemed to have a certain notoriety as we walked across the square to our hotel.

We woke up feeling just fine, and to prove it we were on the road by 8:30. The plan was to head north again, this time on Ruta 68 and again exactly tracing the track from 2013. My memory hadn’t deceived me, this was a great stretch of road. Almost immediately dropping into a fantastic valley near Mirador tres cruces. My silly camera doesn’t even come close to capturing the beauty and all my pictures pretty much sucked. Here is one I stole from the internet.

Here are some of mine.

You never know what is around any corner, fences don’t really mean anything.

Came across these guys in one of the towns, waving and loving the space people on big motorcycles.

One of our favorite parts of the ride last time we were here was Ruta 9, we were excited to do it again. This is Argentina’s version of Deals Gap.

This narrow twisty section went for 50 miles, whew, talk about turn practice! Too dangerous for pictures while riding so here is one at a break point. 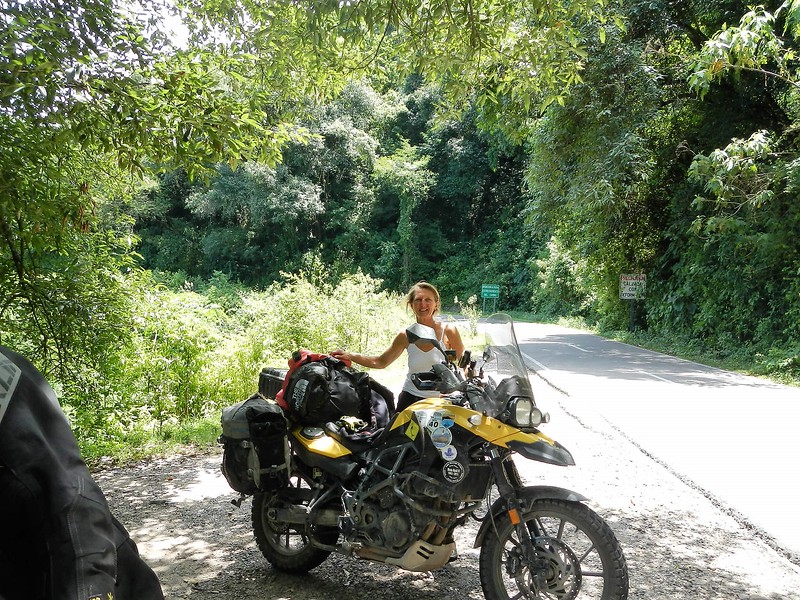 Eventually the road straightened out and we successfully skirted the large city of Salta to continue north. It is here that I must digress….

On January 15 Deby and I were eating dinner at the hotel in Perito Moreto, as is typical there was a TV on the wall blasting away. This time it caught our attention, terrible flooding in Jujuy Provence. Here was the headline. Click on the headline to read the article.

About 1000 people have been evacuated in the northern Argentine province of Jujuy after intense rains caused a mudslide that killed two women and injured at least five other people. The town of Volcan and Tumbaya were the communities most heavily affected by the mudslide caused by a downpour on Tuesday.Two stretches of Highway 9, one of the main roads through the region, were washed out.

Our route for the day took us right through the down, only a little more than two weeks since the disaster. I took a few photos of the aftermath.

Fortunately they had bulldozed out the road.

The “mud” slide completely covered the highway. There was plenty of mud I’m sure but very thick rocks along with it.

Yes, that’s a telephone pole…. wow, what a disaster.

Whew…. is all I can say, these people don’t really have anything and now even less. If there is any good news it looked like a world class response by the Argentina government to help the community, we saw many tents, and portable shelters.

By 5:30 we arrived in the nearby city of Purmamarca, a small dusty town at the base of a fantastically colored mountain that is the main tourist draw. Again, pictures do not do it justice. We checked into the same hotel we stayed in last time that had a rock and metal theme. We were a little disappointed  that it seemed to be under new owners and had not been very well maintained, oh well, you can never truly go back. I remember a wonderful time there with our riding companion Michael H.

Here is picture I found on Google.

You can see the little town nestled in the crook of the colored mountain. We spent some time climbing around the base of the hills.

I managed this picture on my iPhone of a lower hill near our hotel. 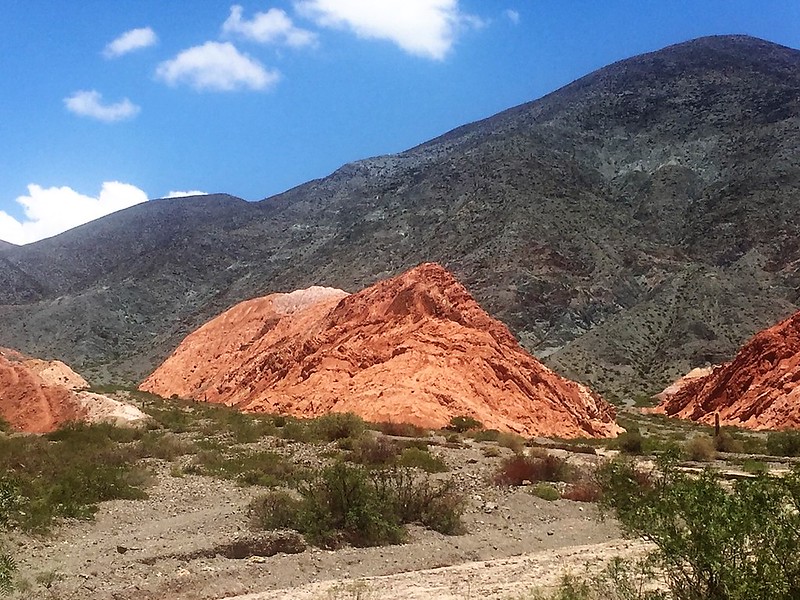 We decided to spend an extra day to explore. We were now above 7,000 feet and we knew we would soon be heading to even higher elevations. Another day to acclimate would be welcome. We could feel the thin air climbing about on the rocks.

Did I mention a lot of restaurants have dogs? This seemed to be expecially true in Purmamarca. This particular restaurant had a dog named Heineken, after the beer. He was a big black lab mix that really reminded us of our old dog Buddy. Heineken had his gimmick… he walked around with an old baseball had hoping people would put scraps of food into it. At one point I looked out the window next to our table and there was Heineken, he put his hat on the window sill and was ever so hopefully waiting for his treat.  I can’t believe I got a picture of it.

Since Deby happened to be having steak, he was well rewarded for his effort.

The next day we had this lovable dog at our table.

We came across these guys building with mud blocks. This was typical construction for most of the buildings here, it must somehow work for them.

Here is a typical street scene in Purmamarca, the only pavement is around the main square.

Most main squares have a statue or gazebo or something representing the city. The tiny town of Purmarcara had neither, just a pile of rocks.

Hmmmm, time to leave Purmamarca and Argentina. Tomorrow off for Bolivia, a country we have never visited. A visa is required and we don’t have one of those either, how hard can that be at the border? I think it’s fair to say Bolivia and the US are not best friends, that always becomes a factor when travelling in a city, we’ll see.

Here is the big picture of where we are so far….. 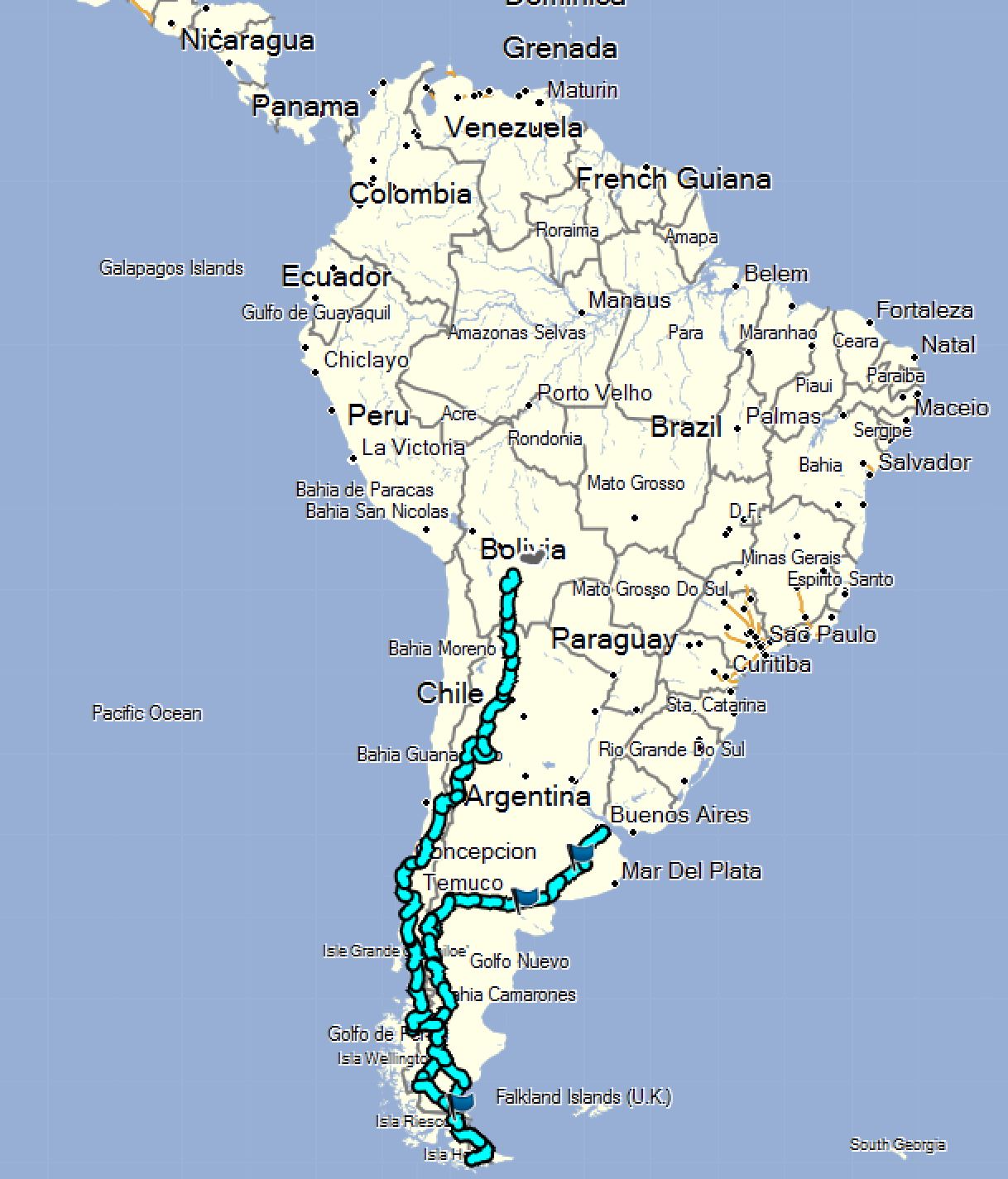 Making progress. For sure we are on “The Long Way Home”.

5 thoughts on “The last of Argentina”