The song was recorded by Barry Manilow in 1978 about a night club in New York City. There is also the famous Copacabana beach in Rio de Janeiro, Brasil. As fate would have it there is also a city in Bolivia called Copacabana and it is on the shore of Lago Titicaca where there is also a beach, of sorts. Any similarities to Copacabana, Bolivia and the other famous namesakes end in name only.

We did have a nice hotel with a third floor view overlooking the lake, a nice reprieve after a day or riding in the cold and rain. Hotel Rosario.

We arrived early enough to have time to explore the town. Carnival celebrations were going on which was fun to watch. Part of Carnival celebrating involves fights with super soakers and full out war with silly string and cans of soap spray. We were briefly caught up in a full on war between these kids at ground level and some others on a balcony dropping water balloons.

There was also the blessing of the fleet of taxis and collectivos. The best I could put together from observing and talking to a few people is that it involves a lot of drinking and then pouring beer on your vehicle, more drinking, decorating your vehicle with flowers and colored streamers, more drinking and a blessing by a priest followed up with …. your guessed it. 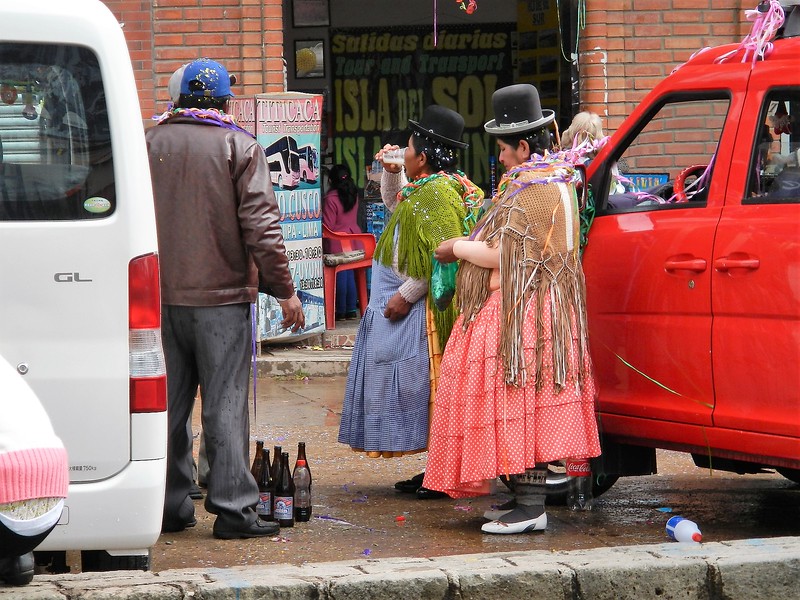 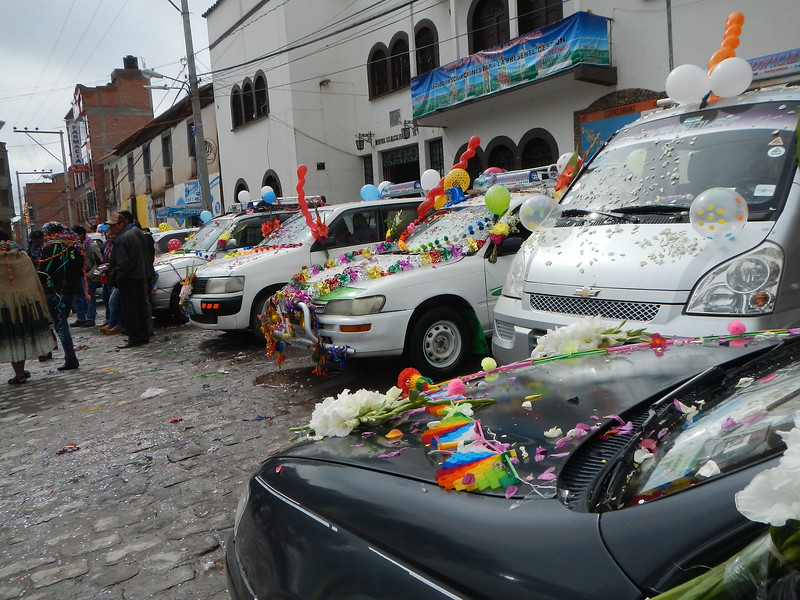 Whew, after all that we decided to visit the local church which was, as expected, beautiful.

I took my proper seat, I won’t translate the Spanish but you can probably figure it out.

Lake Titicaca is the largest lake in South America at 3,232 square miles. It is claimed to be the “highest navigable lake” in the world, with a surface elevation of 12,507 feet. It looks big, you can’t see across and according to Wikipedia it’s 118 miles long and 50 miles wide. We decided to spend a day exploring and booked an all day boat trip to Isla del Sol, Island of the Sun to visit some ancient ruins. More about it can be read HERE if you are interested in actual facts. If you want my interpenetration and to see a few pictures read on.

We bought tickets at a booth on the “beach” and were soon lead to a boat with about 20 other people for the island. No English was spoken and I was pretty sure we were going to the right place but evidently there were a few options for stops. No worries, we decided to follow the crowd. It was a long boat ride, not because it was really that far but mostly because the tour boat with twin 75hp Yamaha’s just wasn’t that fast. Here is our skipper, I think he was half asleep and steering with his feet.

On the island these guys greeted us playing music. I don’t think it was as much for the tourists as a continuation of the Carnival celebration that overflowed onto the island.

The women were over here in a circle drinking beer. 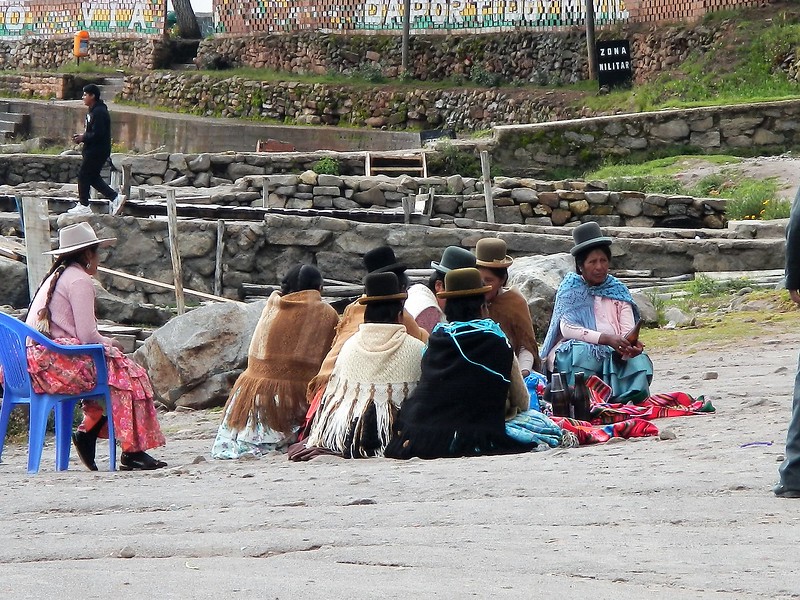 The group from the boat seemed to be following a tour guide who showed up from somewhere. II asked him if any of the tour would be in English? No. Well, no worries, we tagged along and picked up what we could in Spanish.

Along the way these women were keeping the dirt path clean for the tourists.

Actually it was pretty nice, we were walking through their flocks of sheep and pigs and they used branches to sweep up the poo.

Nothing was fenced in so we mingled with the animals along the way. Here is a baby cow with an itch.

Little piggies going to the market.

Most of the island was terraced for agriculture. There were literally hundreds of terraced hills just like this on the island and surrounding Copacabana. Most of these rock walls predated the Incas. 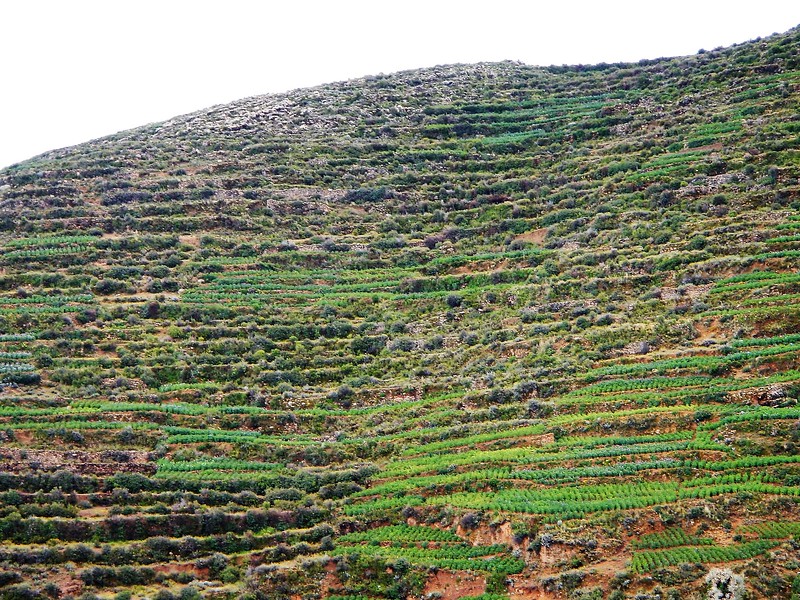 As the path climbed up you can see the little city in the distance. 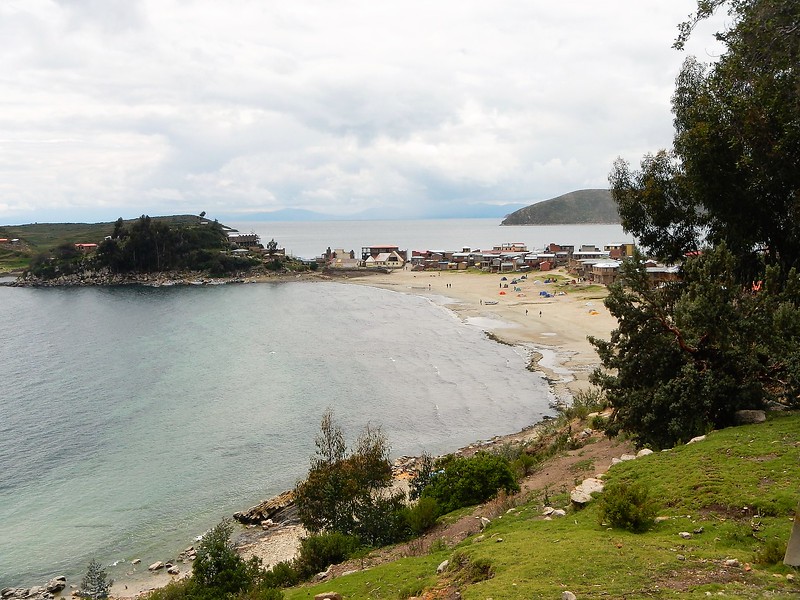 A nice rock path for us to walk on up to the ancient ruins. Deby loved it. 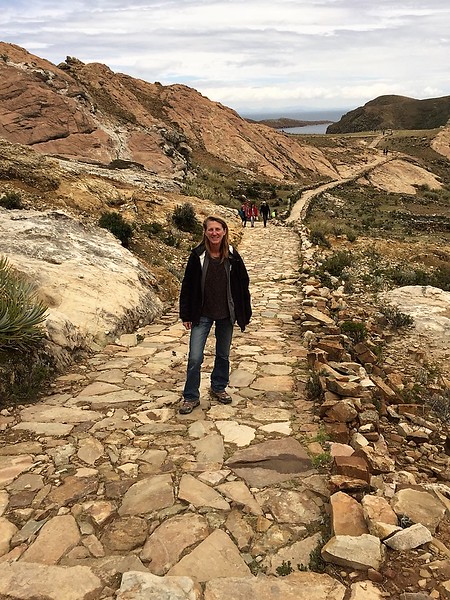 After about an hour we reached the sacred site of the Incas and some pretty impressive ruins.

There was a long explanation by our tour guide in Spanish but we eventually skipped it and walked ahead of the group to climb around the ruins for ourselves.

We met some kids backpacking from Canada who were asking about the significance of the place. Deby and I made up all kinds of things and I think they believed us. There was a maze of rock corridors, fun stuff. 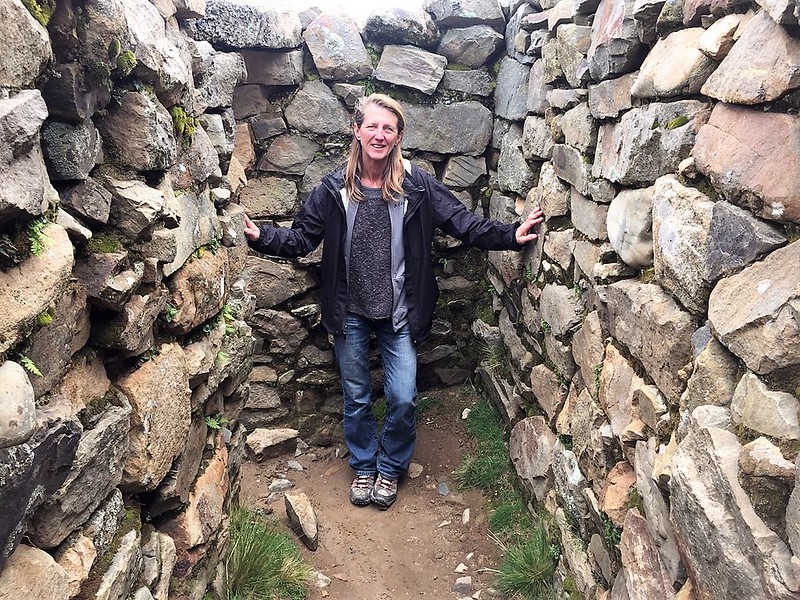 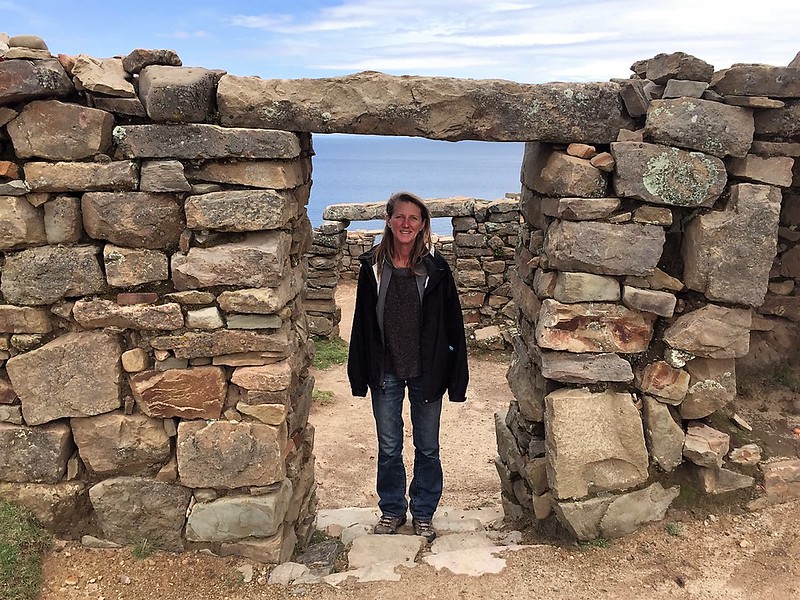 There was this table where they held ancient sacrifices, I thought it wouldn’t be a good idea to stand on it for a photo.

It was a fun afternoon. On the way down we met a couple from England and we chatted the whole walk back. They wanted to discuss world politics including our President and Brexit. Interesting to hear their viewpoints.

Lake Titicaca has the distinction of being the birthplace of the INCA gods of the sun and moon who rose out of the lake to form the Inca empire. (I’m summarizing quite a bit, you probably should fact check for yourself as these may be alternative facts.)

There are a number of statues including two on the island that we posed with. See the similarity?

A little better with Deby.

One last picture on the island. 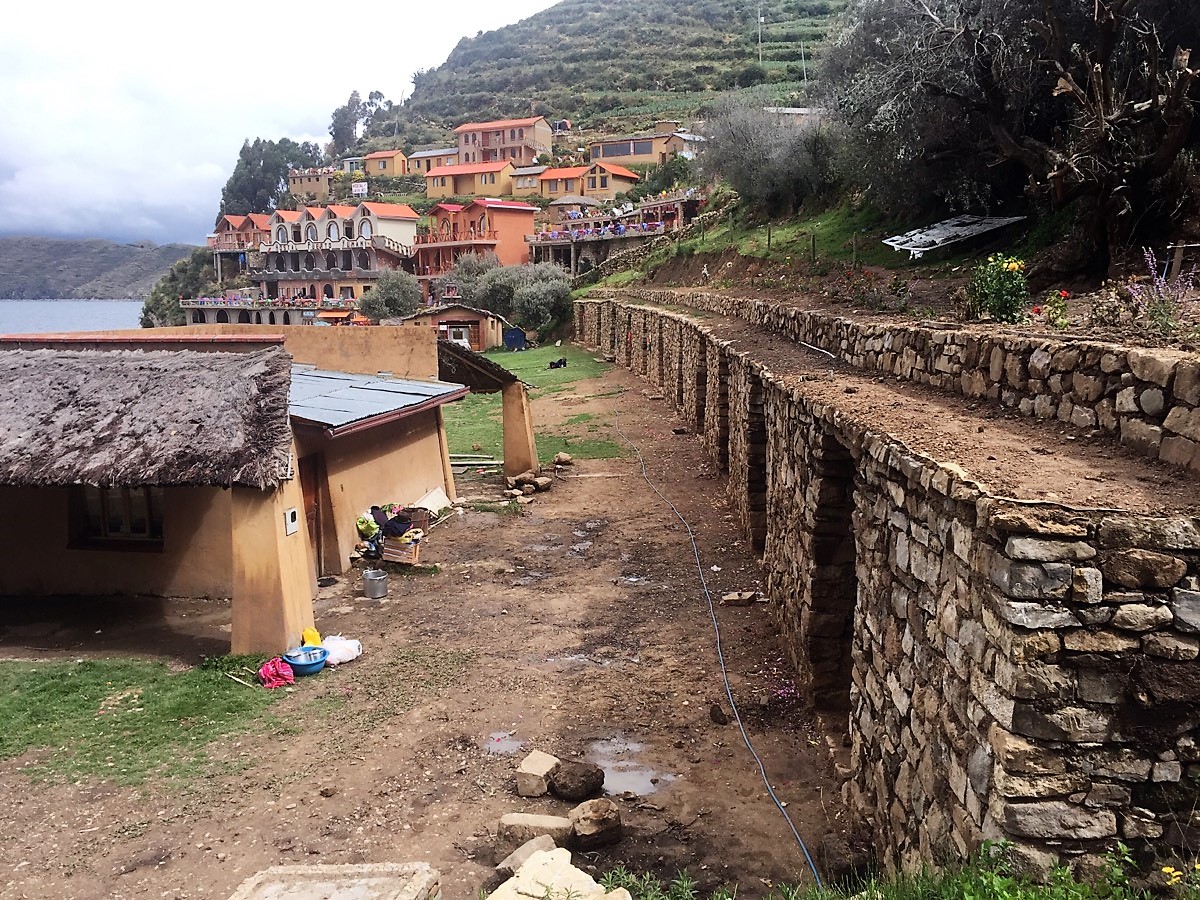 So we wrapped up our tour of the island and napped on the two hour slow boat ride back.

This was our last day on Bolivia. We originally thought we would just spend a week, maybe two in this country, it ended up being almost exactly a month. We were both amazed at how much we liked the country and how few Americans we saw here, almost none. In retrospect we really enjoyed the Salar del Uyuni and our 4 days with the Koreans, the wonderful city of Sucre and a week of Spanish Immersion class, the days riding into the mountains in search of Che with the French couple, surviving the Bolivian Road of Death, surviving the LaPaz city road of death and finally Copacabana and Lake Titicaca. Here is a map of our route.

Really, just a corner of the country since we decided to avoid the Amazon basin jungle part of Bolivia. Would I recommend it? Yes. Fun motorcycle roads, beautiful mountains, really nice people and not too expensive compared to Argentina and Chile. We left Bolivia early on March 2nd at a small border crossing, of course it was raining.

Next Peru, more mud and the Honda breaks down and gets a ride in the back of a pickup truck.

4 thoughts on “At the Copacabana”