Ahhh, what to say. The Bolivian Road of Death is the place of legend and, well, um probably some hype. I feel obligated to insert this YouTube clip of the Top Gear episode, a true classic. It’s 7 minutes long and sets the stage for our ride.

We were so close so we just had to go see for ourselves what it was all about. The whole “Death Road” section is only about 30 miles out of the 130 mile loop from our hotel on the SW corner of LaPaz. We rode in a clockwise direction starting from the bottom left corner to the upper right where the actual “Death Road” starts. You can see there is no shortage of curves along this route.

The elevation plot is just as exciting, up to 14,000 feet then a 10,000 foot drop to the start of the death road. I was glad for gasps of “thick” air. We hadn’t been below 10,000 feet for weeks and it was strange to be able to actually get a good lung full of air.

So let’s see what it was like. The parallel road down the valley is new and has taken most of the commercial traffic off of the gravel death road. In itself it’s a great motorcycle road. Climbing towards 15,000 feet there is snow on the mountains in the not so distance.

It’s a great road with stunning views as we climb to a level where the clouds are hugging the mountain cliffs. 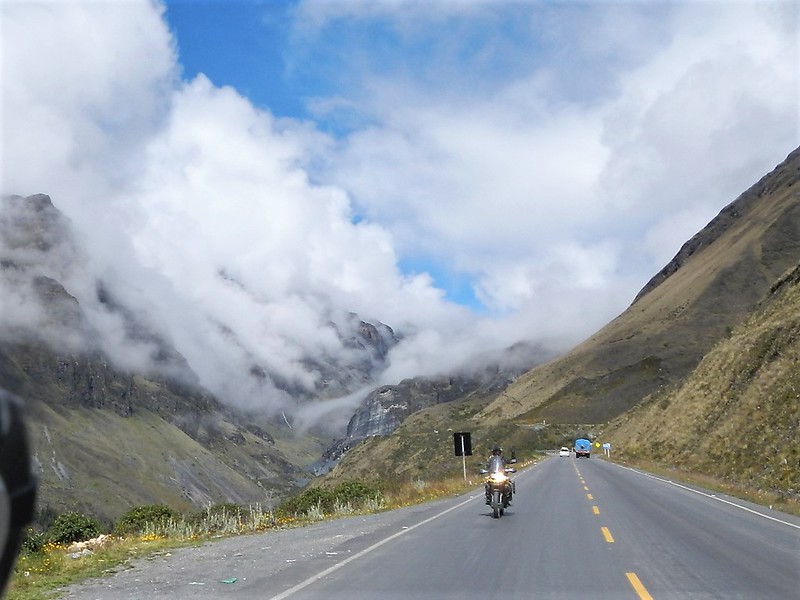 We get to the low spot, take some breaths of dense air and take a break at the little village that only exists to support the convergence of these two roads.

Soon we find ourselves climbing on the legendary death road, it starts to rain….and get colder. Visibility was getting worse so I didn’t get as many really good pictures as can be found online but I got a few. Here is the road looking back at one of the switchbacks.

There were a few places where the waterfalls literally fell over the road.

Here it is from around the switchback.

The higher we got the darker, foggier, wetter and colder it became.

Almost to the end I took a picture of Deby, yes, we were there.

When we popped out on the main highway we took a picture by this low key sign.

Yes, helmets and gloves on, it was raining pretty good. We rode the rest of the way back to the hotel in dense rain and fog. No chance of a picture and the vistas were all obscured by the weather. So the famous death road was a little ho-hum, we were through it in less than an hour, there were some wet rocky sections but nothing too tricky. The most dangerous thing was one misstep and it was a long way down, that’s true with many places we ride. I think we had more danger on the next day….

Time to leave LaPaz for Copacabana on lake Titicaca. Doesn’t every pre-adolescent teen want to visit Lake Titicaca? At least saying it is kind of fun, but I’m getting ahead of myself.

Our hotel on the outskirts of LaPaz was built into a cliff overlooking the water, pretty cool.

Rock walls on the “corridor” to the restaurant.

The surrounding mountains were amazing. LaPaz and vicinity is built into a crook of the mountains with steep slopes all around.

We left relatively early knowing we had a long day ahead of us and we had to traverse the width of the city of 2.7 million people. What happened next defies description, but I’ll try.

About halfway the road just ended and was blocked due to construction. No warning, no signs, nothing. Suddenly all the collectivos (small buses) just stopped and started letting everyone out. End of the line I guess.

We stopped and waited for a while when Deby had an idea…. follow me she said in our helmet communicators. She cut behind a large bus and just started riding through the throngs of people, we might as well have been riding on the sidewalk, it was crazy!

Wow, we followed my GPS to some back roads looking for a detour. Eventually we found ourselves crossing a muddy field with trenches cut into it to keep people from crossing over the muddy field. It was pretty dicey as we jumped the ditches the best we could with our big bikes. Of course it was raining and everything was mud. Our shortcut saved us some time but eventually we got in line with everyone else trying to get through town on the muddy bypass. 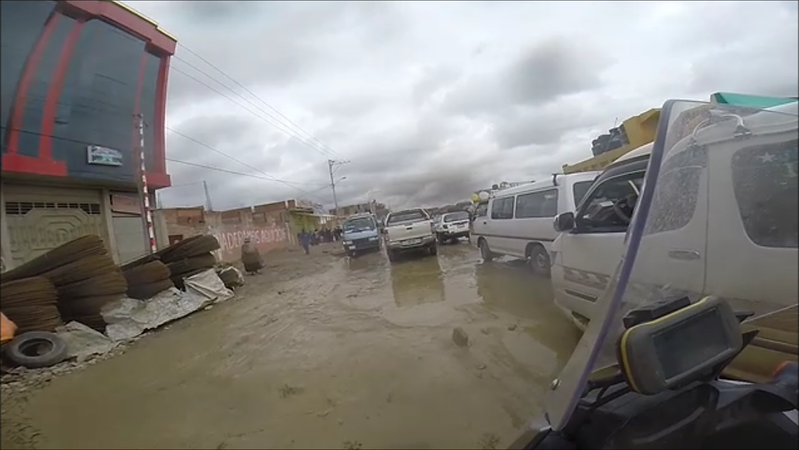 The whole thing was a muddy free for all with cars, trucks and buses going every which way…. in the rain.

After about an hour (yes 1 hour) of this madness the traffic lightened up but the detour or rain didn’t improve so we spent ANOTHER hour navigating muddy streets.

According to my GPS it took us 2 hours to go 25 miles, in the mud, in the rain, dodging trucks, cars and buses. fun?

For the next 50 miles it was good travel on paved roads although cool and rainy, we didn’t mind until we came to this….

The road ended at a ferry crossing for the last leg of the trip. Now this was exciting…. safety not only third but probably eighth. We rode onto the rickety ferry, watch where you put your kickstand.

Shove off with a big stick.

But wait there’s more. This isn’t a pull through ferry, no… it backs into the “dock” on the other side and we have to back the heavy motorcycles off using a piece of wood for a ramp. Sorry, we were both busy getting the bikes off the ramp without falling in so there are no pictures. Suffice to say we stayed upright and dry but it wasn’t easy. This guy wasn’t so lucky.

When backing off the ferry his wheel slipped between the ferry and the ramp. These guys were trying to get it out by slipping logs under the wheel. Good luck with that.

From there it was only about another 20 miles to our destination over a small mountain pass. The rain came down harder as we climbed in elevation. Then it was hail, bigger hail, finally the really big stuff that hurts when it lands, makes it impossible to see and makes the road slick. Arrrg, but we made it. Total distance for the day 104 miles. Shorter than the 130 mile loop for the death road but we ended the day exhausted after the hours of traffic, mud, mud, mud rain and hail.

So what was more dangerous? The “Death Road” or crazy driving getting out of LaPaz, the capitol of Bolivia. Ummm I know what I’m going with.

Next “At The Copacabana”.

7 thoughts on “Bolivian Road of Death”