I don’t have first had experience with some of the big disasters in the US like Katrina in New Orleans but now we are sure in the middle of this one in Peru and it’s a mess. A large part of the Peruvian coast is severely impacted by the rain and flooding. It’s not just flooding, it’s ugly stinky mud flows through these cities.  The blue line below is the 200 mile trek we managed to make yesterday. For scale that is only a small portion of the disaster zone that basically extends from the capital of Lima to the Ecuador border. As far as I can tell from the news large parts of Lima are still without water… big problema. Oh, it’s hot here… in the 90’s and humid. Not the best time to be without water.

We made it to Chimbote by passing long lines of trucks on muddy and underwater shoulders, dodging other traffic on bridges with one lane washed away, jumping the median on the four-lane sections of highway to get around sections covered with mud and just some good luck. I managed a few pictures but was mostly just hanging on!

The towns we rode through were deep in mud. 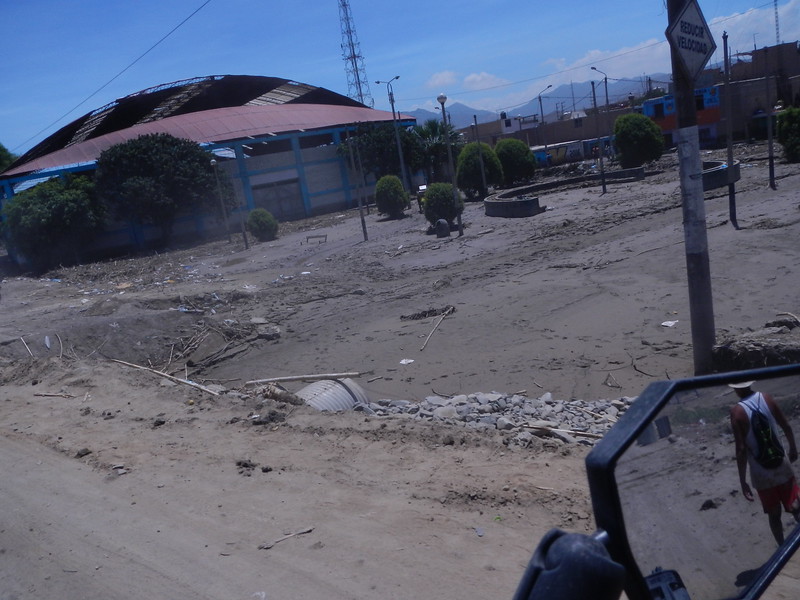 This picture is looking down the main street of Huarmey, the city where we were turned around a couple of days earlier. 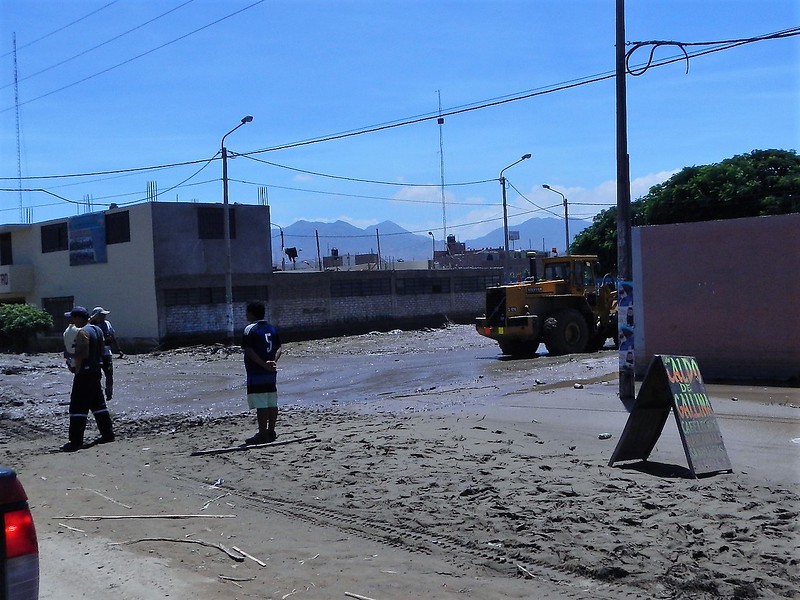 Through multiple small towns this was a common scene.

We needed to get through Casma which was just about as bad.

There were long lines of trucks, the lifeline of Peru, transporting goods from north to south. 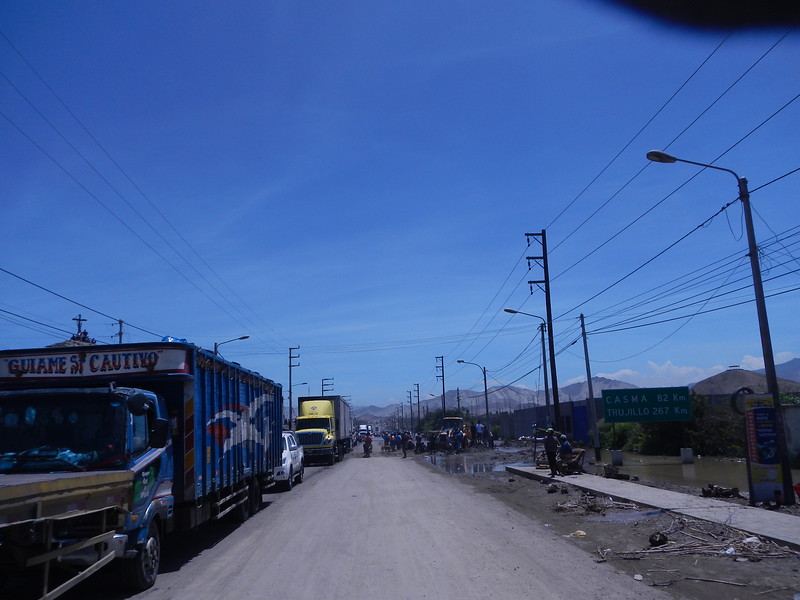 We were really glad we could pass on the right… but carefully, is there really a road under that water? Some water crossings went for a long way. 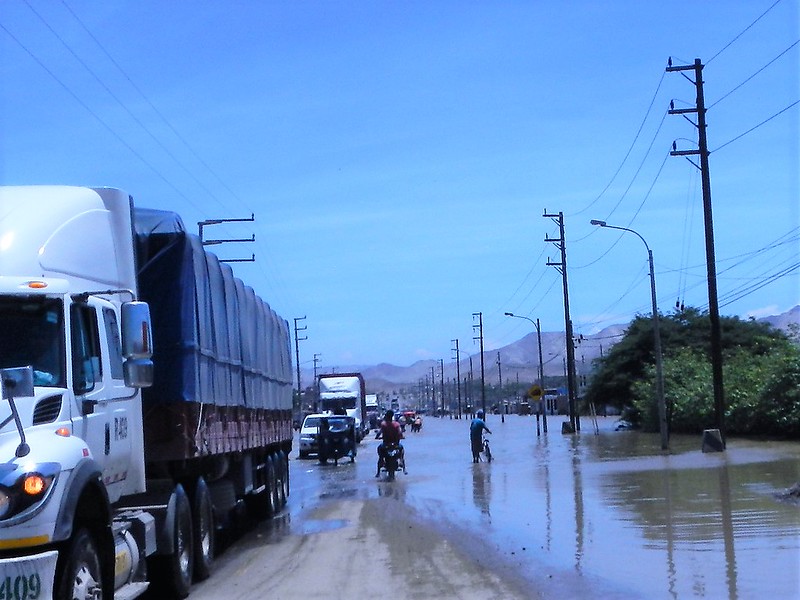 Some sections away from the cities were nicely paved 4 lane highway.

Until suddenly, around any corner, it wasn’t. Here was one of many times we jumped the median and rode on the “wrong” side of the highway. The picture is of both southbound lanes.

You can see the northbound lane ending on the right.

We were riding northbound on the southbound lanes and was hoping the truckers saw us coming!

We arrived relatively early in Chimbote and checked into the Gran Chimu Hotel along the water front. We stayed at this same place four years ago with Dave, Keith, Jim and Michael. This picture is for old times sake and to report absolutely nothing has changed with the place. 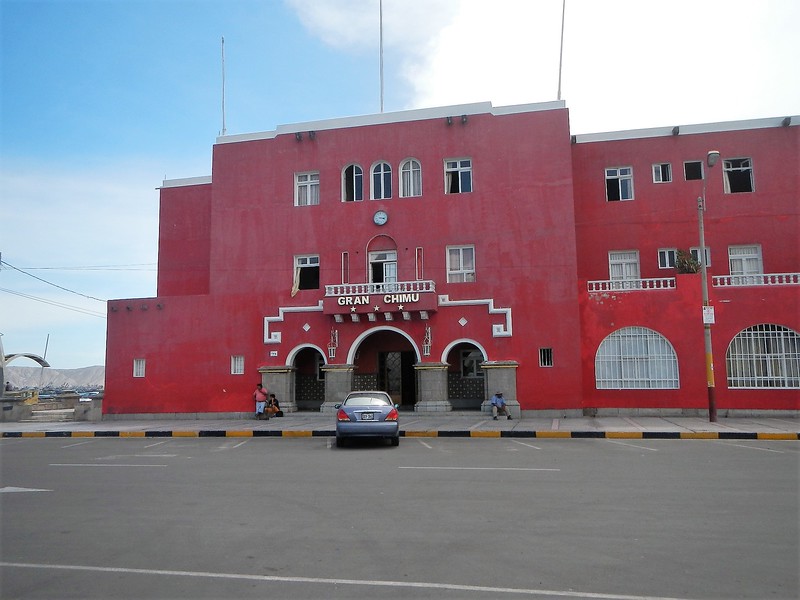 I learned the hotel was built in 1949 and it seems like it was a nice place at the time. The pool is just as empty as it was four years ago…

Oh… and no air conditioner.

I have to show a couple of other pictures… we went for a walk around the city and saw this guy with a crowd around him. 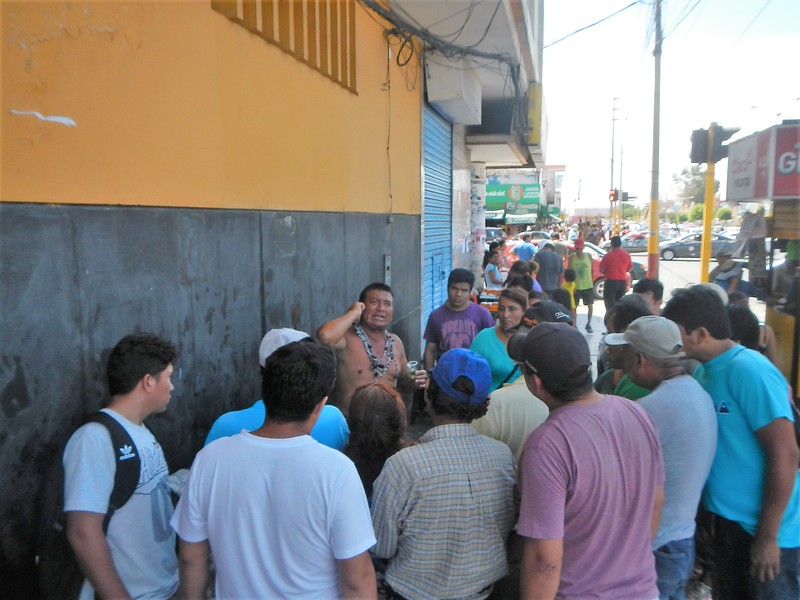 He was going on very adamantly about something so we stopped to check it out.

On the ground was a pile of dead snakes, some alive ones and a giant iguana. 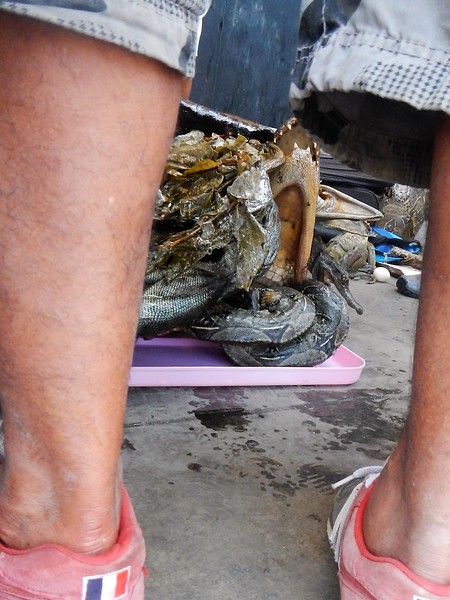 In a tupperware bucket was more… mostly alive swimming in some kind of green slime. 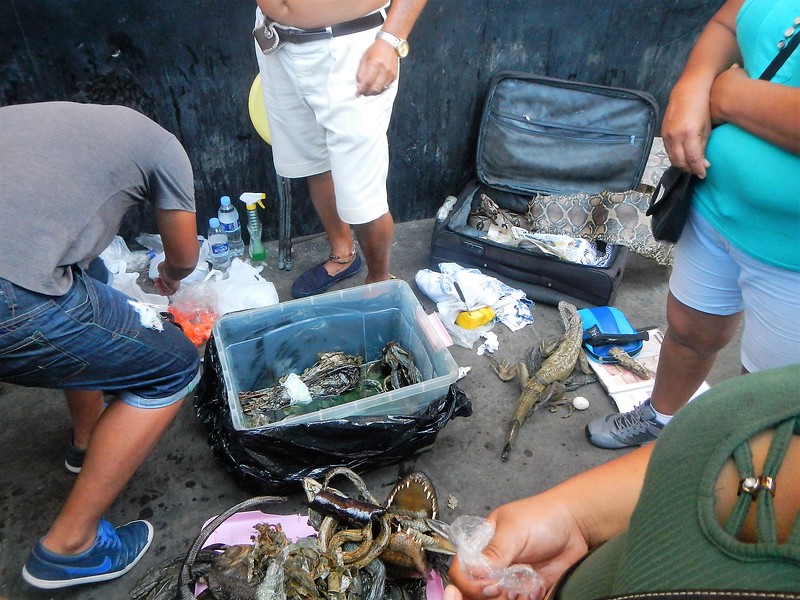 They guy on the left is scooping the green slime into little bottles and they are selling them to the crowd. What the? I listened to the man extolling the virtues of this serum.  He rubbed some on his face and then took a taste of it… wow! People were buying it like crazy. One guy turned around and told me I should get some with a huge grin. For the first time in my life I witnessed a literal “Snake Oil Salesman” right here in Peru. There was a certain temptation to buy some…

Nicholas, the guy from Colombia we rode with yesterday did a scouting mission this morning and only 10Km north the road is closed and police are not letting anyone through. They said it might be open by tonight? The president of Peru was on TV two days ago stating that opening the Panamerican Highway was a priority and it would be open in 48 hours. I guess we missed that deadline.

At any rate we decided to leave early tomorrow morning (Thursday) and try to get further north. Believe it or not we are riding into the hardest hit areas and I’m especially worried about the cities of Trujillo and then Piura. Click on the link to see the devistatation in Trujillo: Drone footage shows widespread flooding in Peru

From there we need to get to Piura… even worse. Click on this link, I’m not sure how much is making it to the US media…. (Oh, by the way… I’ve verified this is not fake news). Videos show the devastating effects of rain and floods as thousands are left homeless in Peru

In short we are doing ok, and managing with social media and contacts we’ve made here. The situation is dynamic and roads that are open now might be washed out tomorrow. We could end up somewhere where we can’t get a hotel and wait on the side of the road. Crossing flooded roads isn’t always the most safe but there isn’t really much choice, we’re pretty careful.

10 thoughts on “Disaster in Peru”