Ummm, so we are OK but stuck. We can’t go north and we can’t go south. Lot’s of pictures of devastation in the news and online. Here are a few I took yesterday.

This is why we can’t go north… it’s worse than it looks. This is the PanAmerican Highway, the main north – south route in the country. The only other way north or south is through the mountains and we were strongly advised not to even attempt that road. 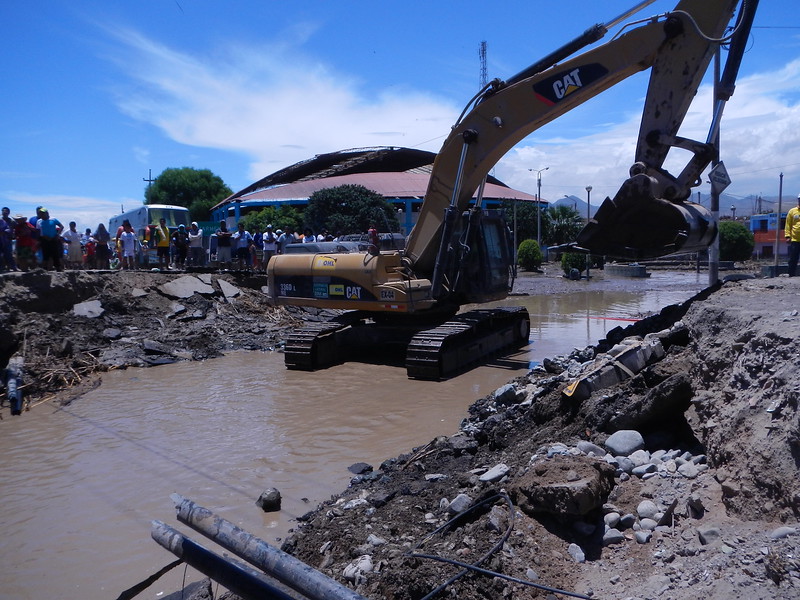 Here is where the road was washed out.

There has been a lot of complaining about the government response to the crisis. Deby and I watched for a while as the locals were gathering together to fix the road themselves.

We parked next to a pickup truck and talked to a woman from Lima who heard about the disaster and drove up with a truck load of water and food for the people. She told us the same thing we heard from a few others, that the situation was getting dangerous with angry people and increasing crime in the city and little government help.

Some people were getting across by actually dodging the active track-hoe working in the river. They were carrying supplies from trucks to load on trucks across the river. Others were obviously from the buses carrying suitcases hoping to find a bus or car on the other side to take them to their destination. This crossing looks easy but it was rocky with deep holes and full of muddy water.

Sooo, what to do. We decided it would be best to not add to the problems here and turn around and ride south. We were lucky, we had enough gas to go the 100 miles to the next somewhat large city with a hotel. We found out that many of these people had been waiting in the nearly 100 degree heat for three days.

It took us a couple of hours to get to the town of Huacho where I am now. We lucked out and found a nice hotel with a pool and an air conditioned room, a luxury we hadn’t had for a number of days.

There were plenty of places where the highway was covered with mud and it was clear that it was totally impassable only days before.

Other places with beautiful 4 lane highway with no traffic… I wonder why.

So here we are on our second day in Huacho, waiting….

Here is a good time to back up a few days…

On Monday March 13th we reconnected with Steffen from Germany and left Cusco for the coast. We were looking forward to leaving the cool mountain weather and getting some warm sun. The first day we rode just under 200 miles from Cusco over a 14,000 foot pass and then down 8,000 feet of switchbacks to Abancay where we climbed again to over 14,000 feet and then back down to the city of Chalhuanca where we found a hotel for the night. The riding was nice with off and on cool rain in the mountain peaks and warmer in the valleys.

After a few false tries at hotels we settled into the luxurious Hotel Zegarra. Steffen decided it was a good time to replace his rear brake pads.

As is usual we checked his wheel bearings and ouch… one was showing some signs of wear. Bummer. We put the bike together and made plans to get the bike fixed in Lima.

Tuesday March 14 was more great mountain riding. I managed a few pictures because it was warm and dry enough for me to take off my winter gloves. I love the winding road pictures, we twisted and turned again for a second day up and down the mountains and valleys.

Here is a valley we had just ridden through from near the top of the pass.

Fun mountain roads and it would have been perfect if not for the clouds we were climbing into.

Lots of cool rock formations along the way. 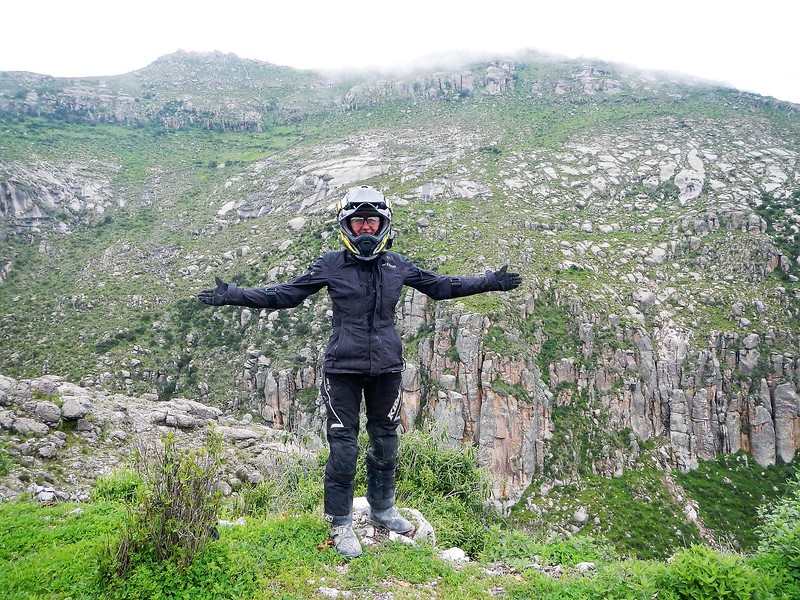 We knew from the last time we were here that the road drops from over 12,000 feet to just under 2,000 feet in a 60 mile span. That’s just where the rain hit. Really? We were dropping into the Nasca desert, one of the driest places on earth and we were getting rained on. Not only that… we were in the thickest fog/clouds I’ve ever ridden in. We were blind on a crazy winding mountain road. I tried to follow a car (without tail lights of course) but couldn’t even see it from what I thought should be a safe distance. We inched down the mountain, all three of us in first gear and just did the best we could for two hours.

Finally around 2PM we dropped out of the rain and it started to get hot, we were entering the desert. We only stopped briefly in Nasca for gas and then rode out of town and the rain returned off and on. About 10 miles north of Nasca is a tower that is a viewing platform for the “Nasca Lines”. An interesting thing in the desert that is sometimes attributed to space aliens. You decide… but here is a picture.

Our destination was an “Oasis” Deby had read about near the town of Ica so we only stayed a few minutes to view the lines and continued on.

Ok, this place is crazy. A true Oasis in the middle of huge sand dunes. Here is a picture I took from one of the dunes.

We had heard about flooding in Peru to the north and decided to spend a few days here riding out the storm. I could think of worse places…..

We found a decent hotel near the lake (aren’t they all?). The main activity seems to be going for dune buggy rides in the sand dunes so we signed up for a tour.

This was our machine…

I know a few things about vehicles and this was a total junker. A totally old school, chevy big block V8 with nearly straight pipes. He kept overheating but managed to add enough water (in the picture) to keep the thing running. Somehow we survived a two hour tour and returned to tell about it. It was two crazy hours of insane driving up and down steep dunes, wow. 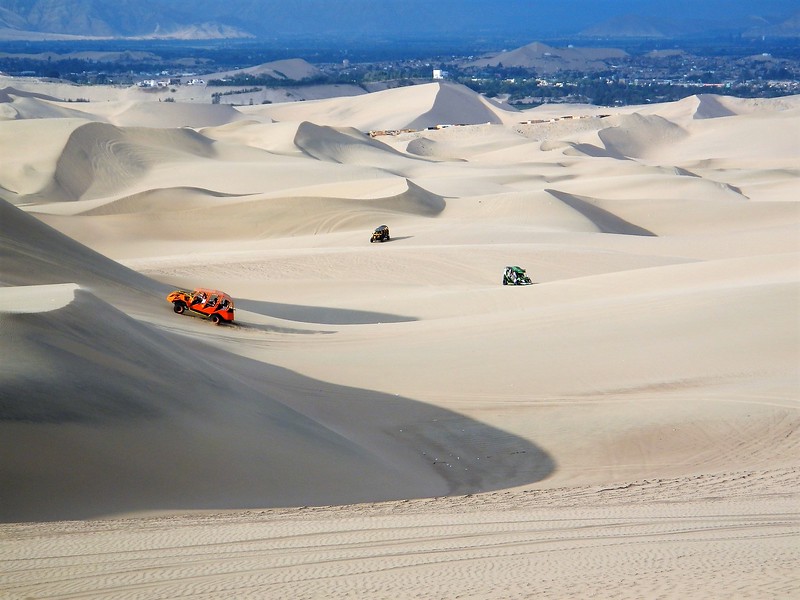 Steffen took a picture of us…. notice the rain in the mountains behind us? Not good.

We stopped for some sand boarding about mid way. Figures.. Steffen is a pro…

Me? Well, I thought I would take the safe route…. (Sorry Jon and Weston, I wish you could have been there for a lesson). 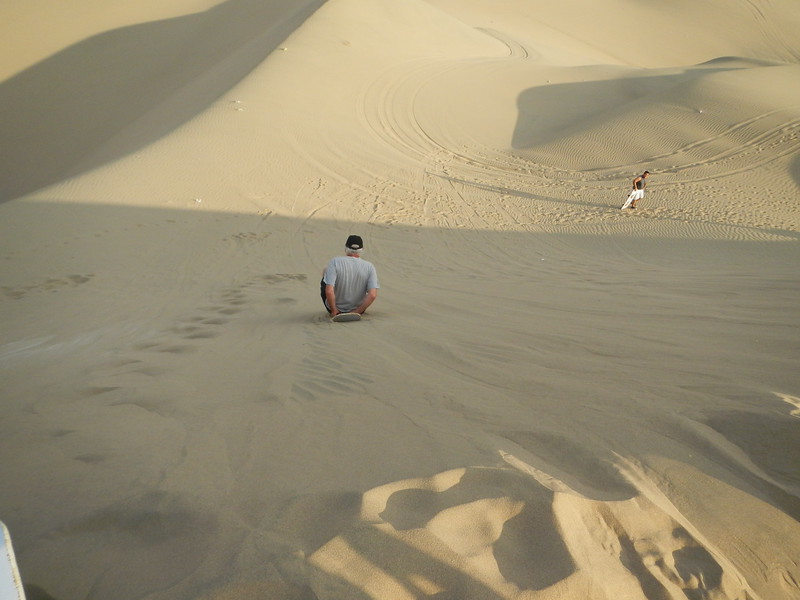 Our driver had other ideas for Deby….

Just go like this…. then a complete safety briefing in Spanish. Deby just kept saying si, si and that was it.

Wow, it was a long way to the second drop off and she kept going.

Yes that little spec in the middle his her.

Then walk up and join the others. They walked over the next ridge for another drop down. I couldn’t believe this dune buggy was climbing up the steep slope.

Here she is at the bottom, a real survivor.

They timed it to end just as the sun was setting… nice.

Ok, so we killed a couple of days sitting around the pool and reading books in the warm sun but on Friday we hoped that the roads to the north were better and the three of us ventured onward. Deby and I had already been to Lima and decided it would be best to avoid the big city all together but Steffen needed to get his wheel bearing fixed so we rode as far as Lima together and he stopped in the city while Deby and I continued on to the city of Chancay. Chancay was a city we visited on our last trip in 2013. We stayed at the same hotel near the main square.

Steffen met us here after a rough couple of days in Lima. The city of roughly 10 million people doesn’t have water! He said the city is a mess, people are near revolt  and the army has been called out to keep the peace. He managed to get his wheel fixed but couldn’t wait to leave. No shower.. no toilet flushing… nothing.

So where to go? Can’t go south.. Lima is a mess. If we manage to get past the one washout we came to we will only ride into the northern part of the country that has even worse flooding. No trucks are travelling on the only highway so how long will food supplies hold out here? Bottled water? Who knows. The news if full of dire stories of flooding, looting and price gouging. People are upset at the government response and tensions are rising. There is little online about road conditions and nobody really knows what is going on or if the roads are open. The language barrier is not helping either but we are managing. At the moment this city seems OK and actually has more and more refugees from Lima arriving everyday. I’m glad we have a room.