An easy day’s ride from what we now call the “Waterfalls” hotel near San Pedro Sula Honduras to the small tourist town next to the Copan Ruins. I think the town is actually called Copan Ruins but it might be called Nueva Esperanza. Either way most people just refer to the city as “Copan”.

After 135 miles in the increasing heat, nearing 95 degrees, we arrived at the town and checked into a fantastic hotel right in el centro, Hotel Mariana Copan. Air conditioned room and nice looking pool. That would wait because the front desk offers to arrange a tour of the ruins with an English speaking guide if we could leave in an hour. Sure, why not? So we change into touristy attire and load into a van with our guide for a private tour.

Our guide, as it turned out, just came back from visiting Oregon for some weeks on a bird watching expedition. He is somewhat of an expert on all things birds, nice for us as he brought his field glasses and we spent as much time getting a bird tour as we did of the ruins.

Greeting us at the park entrance was a flock of McCaws, these awesome, big and brightly colored birds.

But the real reason for the visit was the Mayan city of Copan. Here is a brief paragraph from an online website. To read the whole thing click HERE.

Discovered in 1570 by Diego García de Palacio, the ruins of Copán, one of the most important sites of the Mayan civilization, were not excavated until the 19th century. The ruined citadel and imposing public squares reveal the three main stages of development before the city was abandoned in the early 10th century.

We had been to other ruins before but it’s always interesting to me that they are “discovered” buried in the jungle and then excavated to reveal these amazing structures.

In this next picture look at the stairs in the foreground, we went in there. 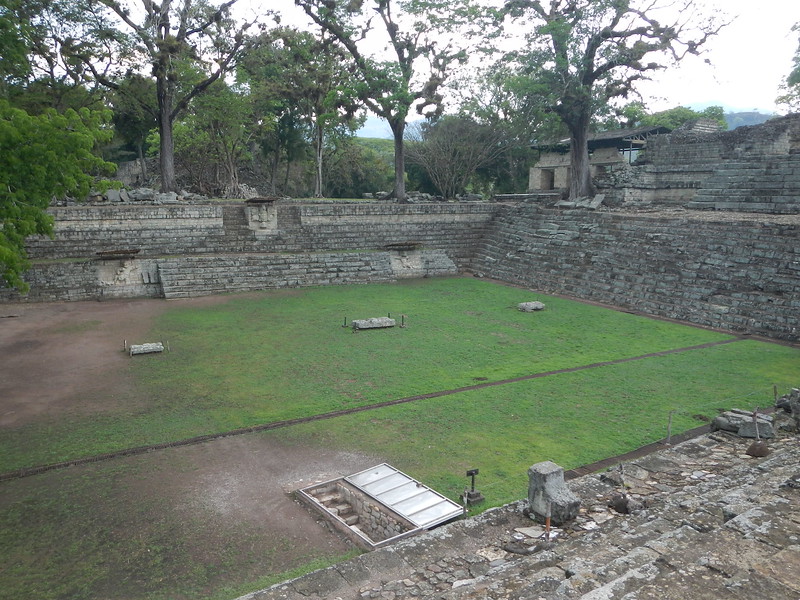 The Mayans would build a temple and then build a completely new temple surrounding the old one. We were able to visit some of the inner temples via a series of tunnels in the ground. Our guide timed it so we entered the tunnels just as the afternoon thunder storm hit.

The walls of one of the inner temples.

This is a stairway with each block having hieroglyphics describing the history of the city and it’s kings.

There were a lot of carvings of heads and animals, our guide said over 30,000 all together. I didn’t take pictures of them all.

Lots of skulls. Does this one remind you of Homer Simpson? 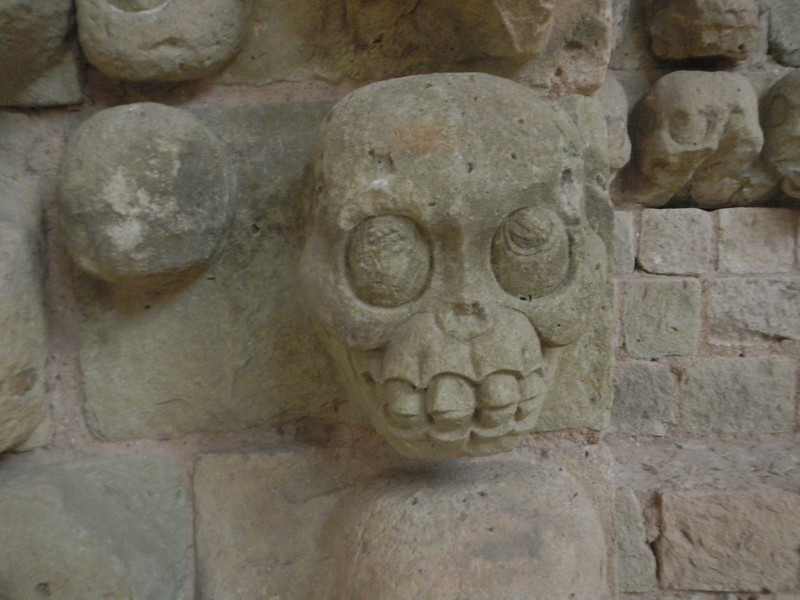 I kind of liked the dancing Puma.

This was a famous spot where the kings would come out to address the people.

It was a nice visit which ended up in a new museum with even more carved things. It was worthwhile to pay a few bucks for the guide.

Another good reason to visit Copan is it’s proximity to a very small border crossing onto Guatemala and would allow us to avoid the madness at the Panamerican crossing. We got an early start to avoid the heat and had just turned from the hotel parking lot onto the cobblestone street when I heard Deby in our helmet communicators telling me something was wrong. Great. We pulled over and I immediately noticed she had a front flat tire. How did that happen? As usual whenever we stop in a city setting we were surrounded by people who want to watch, help or ask questions. Without saying much I got out my portable pump and started airing up the tire. When that was done I inspected for leaks but didn’t see anything obvious so we continued on. I would be adding air twice a day for the next 10 days….

As expected the border crossing was somewhat quiet without the normal hustlers. Checking out of Honduras was easy and then we rode down the road a bit to get accepted into Guatemala. There was a slow moving line and we needed to walk to a bank to pay a fee and return with the receipt. When we returned the office was closed… we found out later it was for a staff meeting. Since we were returning we were allowed to the front of the long growing line. When the aduana lady came back she inspected our bikes and needed copies of the registrations and passports. Uggg, she looked at us standing in almost 100 degree heat and noticed the long line behind us and just went and used her own copy machine. Hey, that was nice!  Stamp, stamp, stamp and a sticker on our windscreens and we were through.

Our goal for the day in Guatemala was the colonial city of Antigua about 150 miles away. The shortest route took us through the capital city of Guatemala City where we honed our lane splitting skills through the midday traffic and heat.

Once through Guatemala City the road became a really nice 4 lane highway… ahhhh when suddenly………. with no warning……….. SLAM ON THE BRAKES. With no warning the highway just ended and turned onto a narrow colonial cobblestone street. Geesh, good thing we’ve learned to be prepared for anything, but still, this was something new.

Antigua is one of those places anyone visiting Central America should visit. We took some time to explore the easily walk able touristy city and took a few pictures. 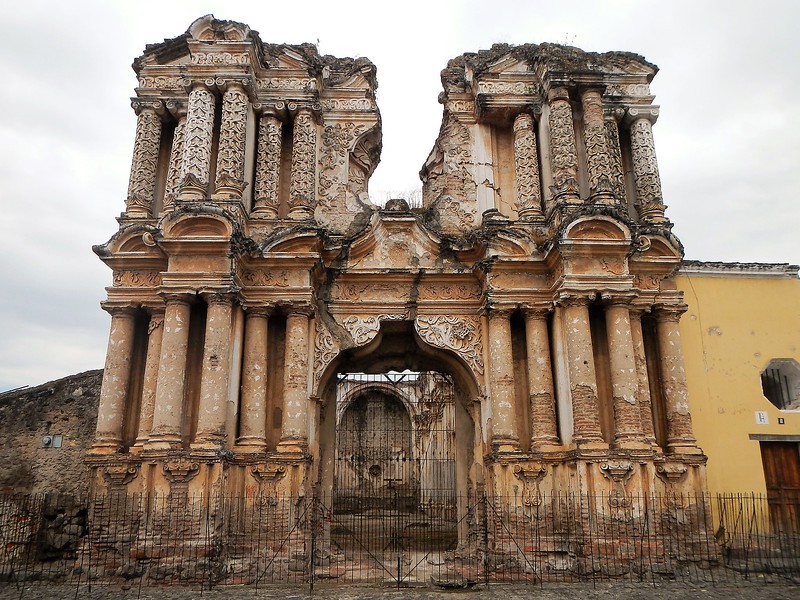 The city is full of ruins from an earthquake in 1773 that are still standing. 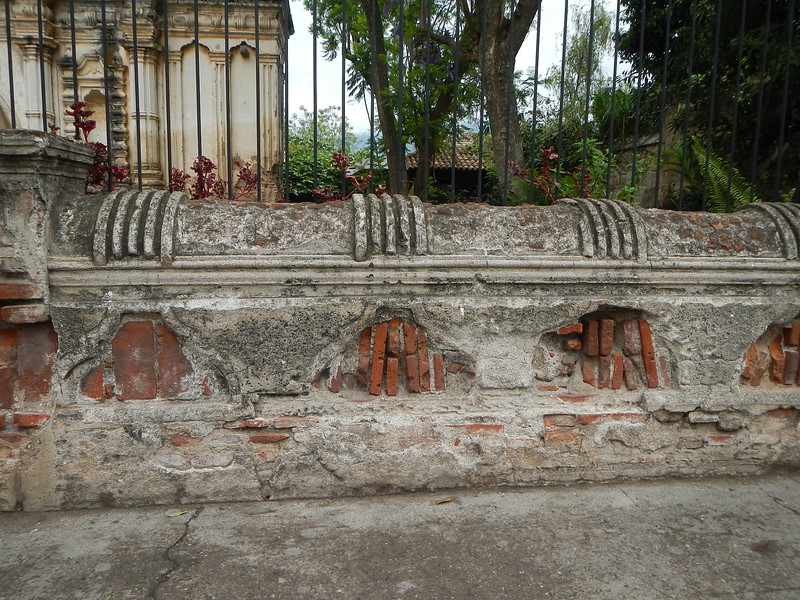 As much as we like Antigua we had the opportunity to ride to the city of Chichicastenago and be there for the famed Thursday market. Since it was only 70 miles away we had a leisurely start and where in Chichi (as they call it for short) by early afternoon. The road climbed from 5,000 feet in Antigua to just under 7,000 feet in Chichi which brought much welcome relief from the heat, ahhh. We checked into a really nice hotel, The Mayan Inn. The whole hotel is also a museum and every piece of furniture has some historic significance. Best yet it was only about 50 feet from the edge of the market.

According to Wikipedia  98.5% of the municipality’s population is indigenous Mayan K’iche and 92% of the municipality’s population speaks the K’iche language. The market is one of the largest indigenous markets in Central America. It was great getting there a day early to walk around and watch the setup and check out the booths before the crowds arrived.

Everything was hand-carried in. The lucky vendors had hand trucks. 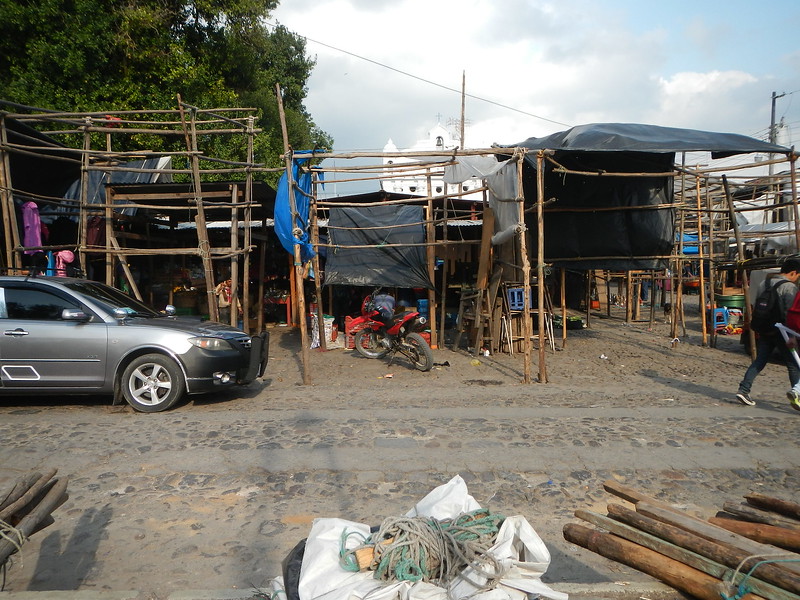 The food vendors were getting ready. 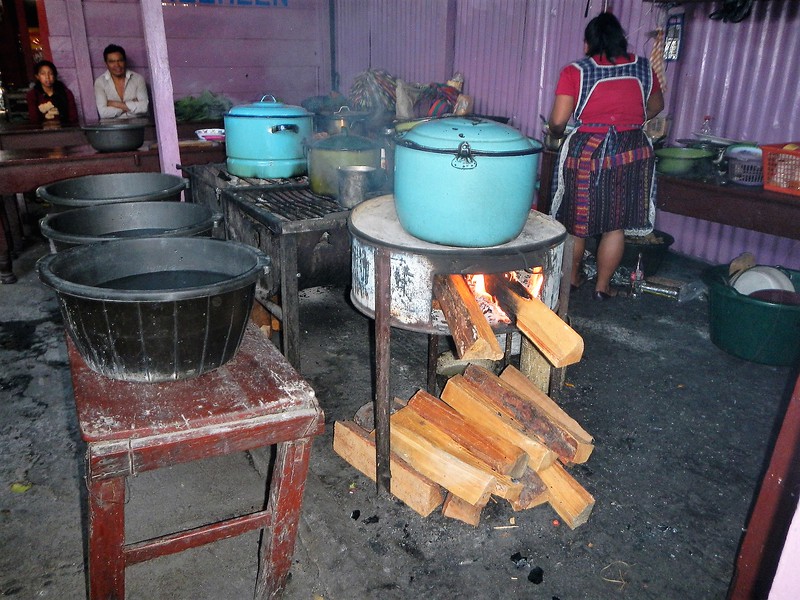 But the next day is when the real fun began. We had a ton of fun exploring the maze of booths selling just about anything you could imagine.

We had fun hanging out and taking pictures. Click on any of the pictures to see more….

Lots of color and excitement, loved watching the locals buying and selling. There were a few gringo tourists but I don’t think I saw more than 10 or so. We were the outsiders for sure.

We took a walk to the colorful cemetery on the edge of town. 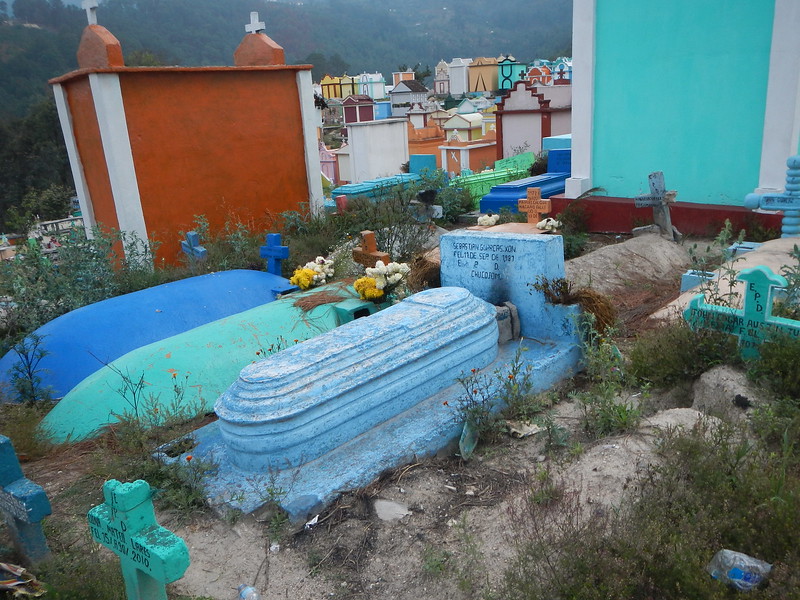 Back in town for a few more pictures… not sure why I liked this one. Glad I don’t need any dental work here…

Saw this TV repair shop… that’s something you don’t see in the states anymore.

Need a mask for you shaman ritual?

I still can’t figure this one out. He was selling rocks by the pound. I asked in Spanish Que es? and I think he said Lime. He had a stream of people buying these rocks though. Got Deby’s attention.

Looked like a good place for a rest from the mayhem of the market.

It was a nice couple of days in Chichi but we were anxious to get an early start to our final border crossing in Central America (yeah!). This was the outside of our hotel, they were getting a new window after a car ran into the wall causing some damage the previous week.

Then on the way out of town we had to stop on a steep slope while this truck did a 10 point turn trying to turn right.

It wasn’t far to the Mexico border and everything was very easy. No hustlers, nothing except the usual going down the street for copies of passport, registration and drivers license and then back for the final stamp, stamp, stamp and we were on our way.

So, I’m going to stop here for now except to say southern Mexico is great. It’s a little warm but we’re dealing with it fine. We’ve been to Mexico so many times now it seems familiar. Stay tuned for the next post as we make our way through Mexico to one last border crossing!