The trip so far:

We decided to take an off day to explore the palaya Tamarindo near Santa Cruz Costa Rica today so it’s giving me a chance to catch up on the blog while in the comfort of the hotel “living room” with a nice breeze, the sound of exotic birds and a cool drink. Monday morning Deby and I woke up early enough for a walk around Leon to take a few pictures.
Our hotel, the Best Western in the heart of Leon. 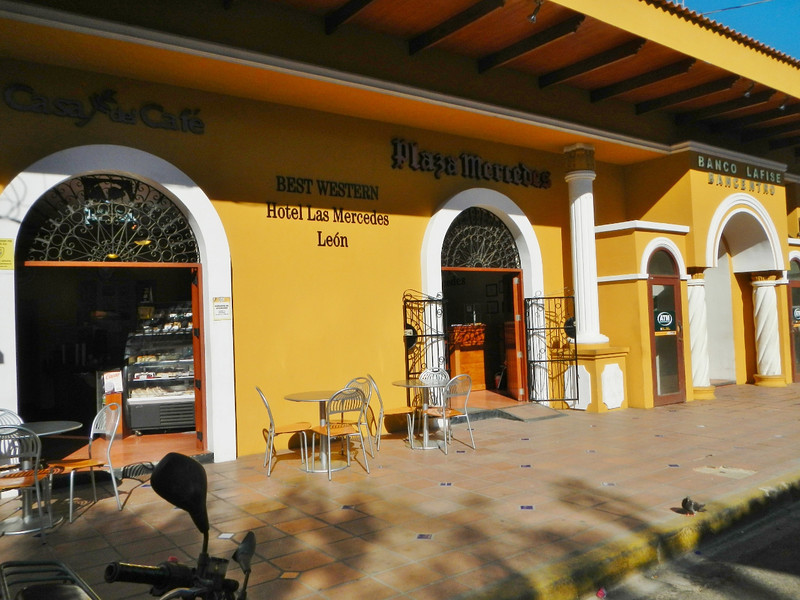 Typical roads we were riding around “lost” trying to find the group and the hotel.

No problem riding down these roads, check out the volcano in the background.

Retail along the way. 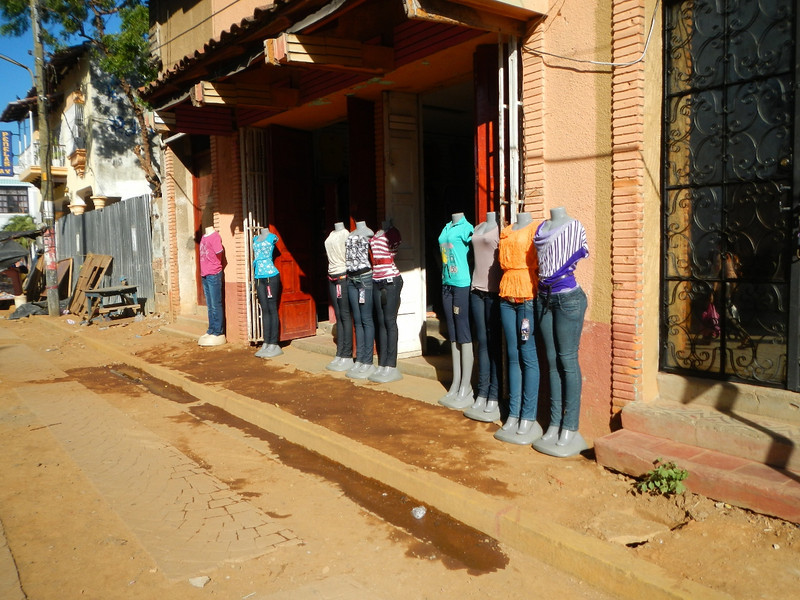 This church was across from the hotel, not much to see on the outside. 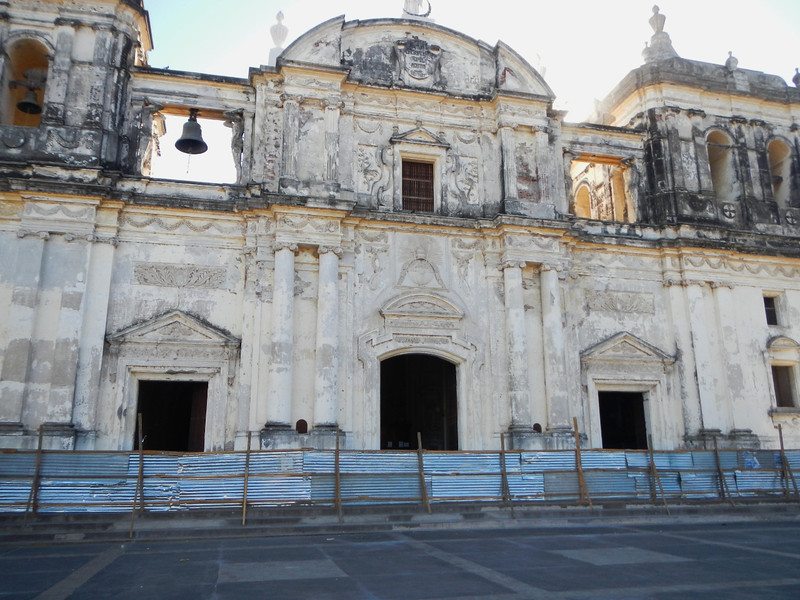 Beautiful on the inside.

Destination for Monday was Granada, an easy 109 miles (ha). We took a detour off the Pan American Highway onto CA-3. I would say it’s not as well maintained.

Plenty of sections where the pavement was non-existent.

Being off the main highway, traffic was light and didn’t move very fast.

Keith took a nice picture of me and Deby. 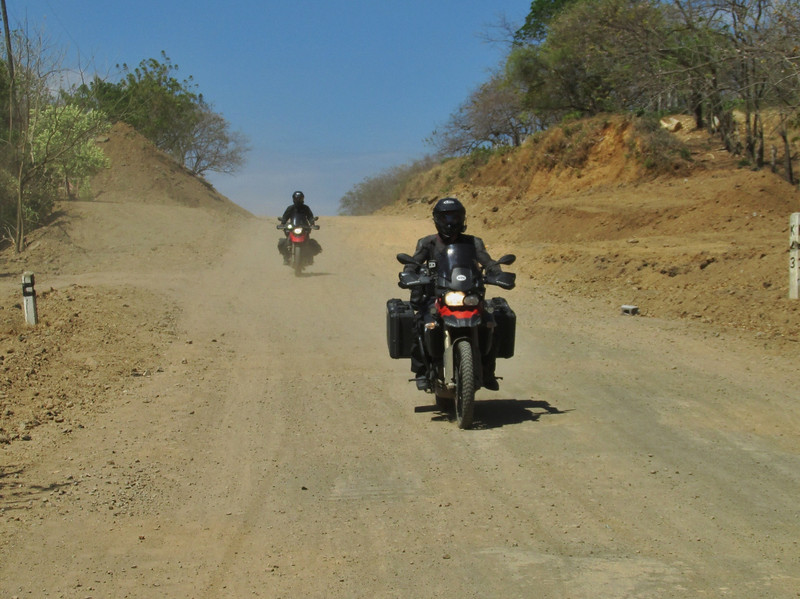 Keith’s bike took a short nap…. no damage to bike or rider.

Finally, the road reconnected with CA-1 near Managua, we missed the turn south towards Granada and had to turn around. As just after we turned south on the correct road we noticed two additional Adventure bikes falling in behind us. It was our friends, Tad and Gaila! (Their blog is Overland Now)  Wow, good thing we missed the turn or they wouldn’t have caught us. We pulled over for a short reunion meeting, introductions and a few pictures. 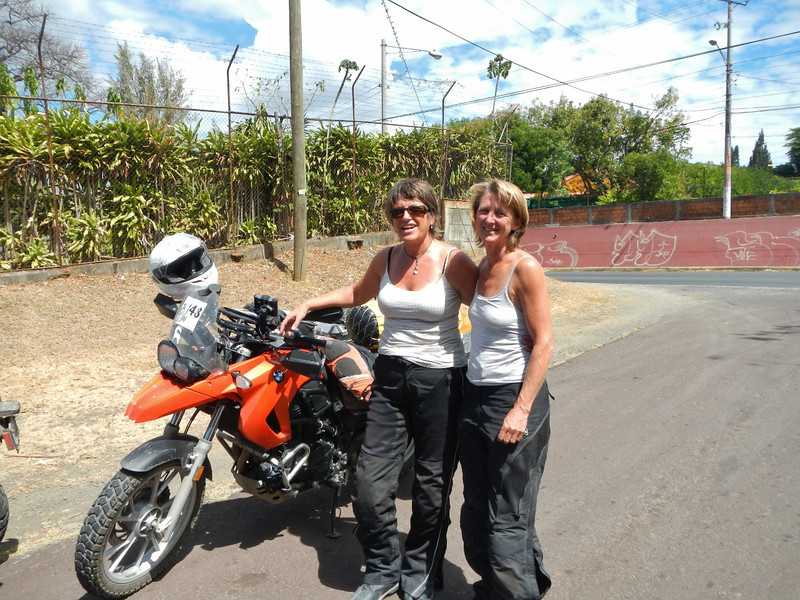 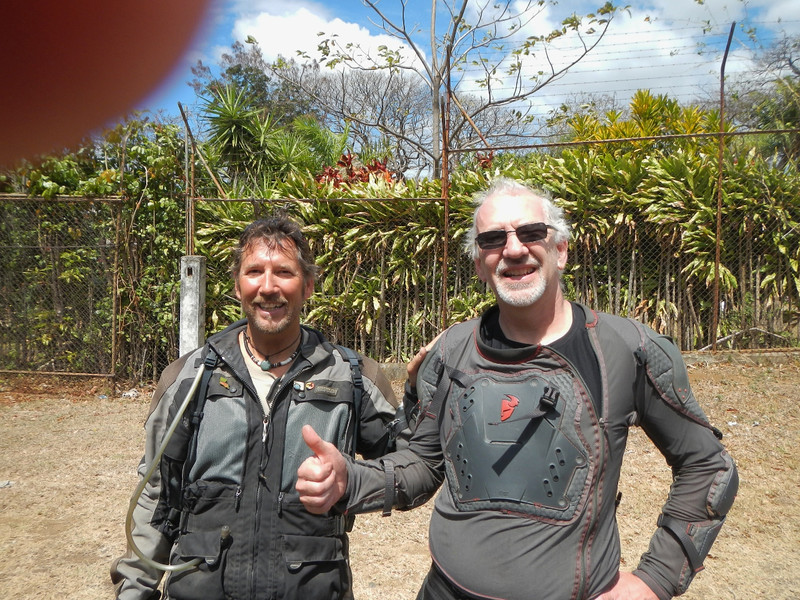 They rode with us to Granada where we had a great stay at the Hotel Granada The four of us went in for a horse drawn carriage tour of the city.

Our guide even let Gaila take the reigns for a while… you think motorcycle riding is dangerous, yikes. The horses took off at a near gallop on a wild ride down a one way street before our guide showed Gaila how to control all that horsepower.

On the way back our guide stopped at a small cigar factory where we had an in person demonstration of cigar rolling. They let Gaila roll one of her own (hmmm, she has all the fun).

After rolling they go in this thing. 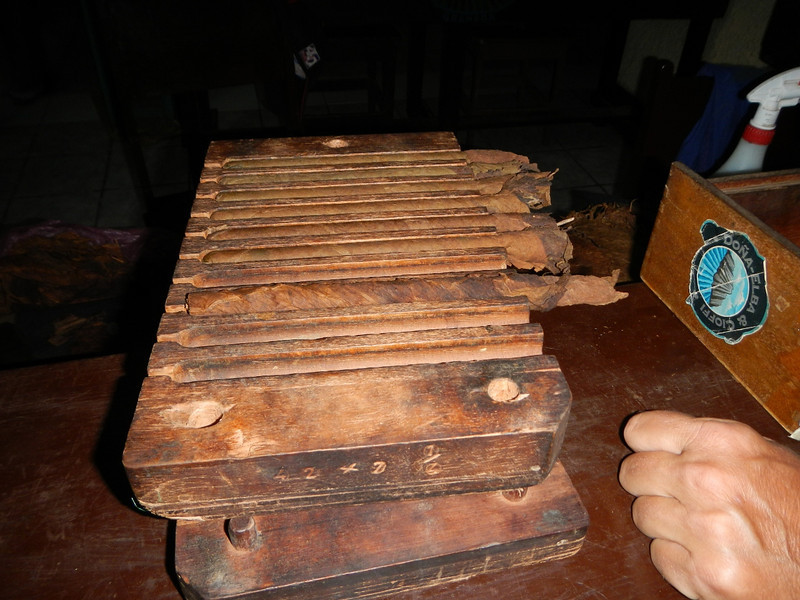 And then into a press. 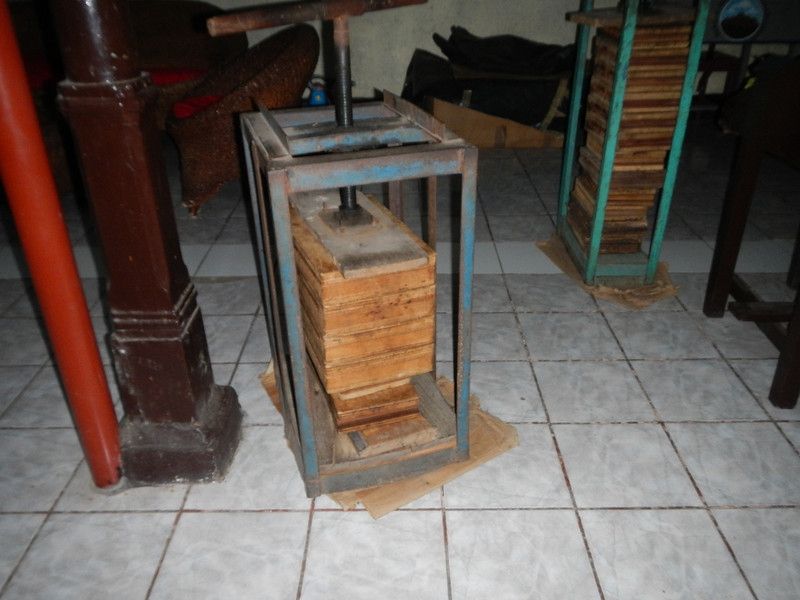 Then we sampled the product.

We ended the night with a nice dinner with the whole group and a walk about town. 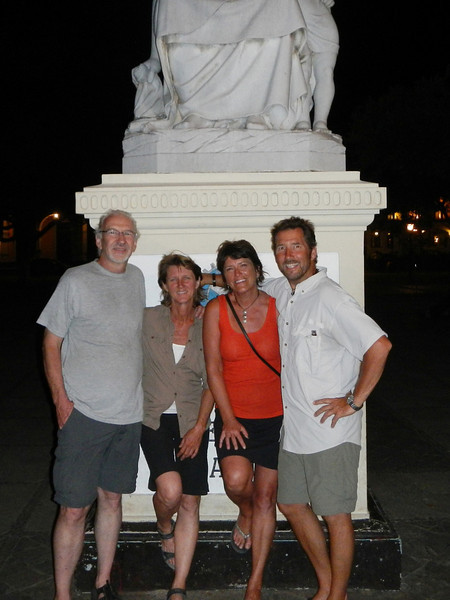 We took a staged photo for the Issaquah Press.

Tuesday morning we decided to continue on to Costa Rica and Tad and Gaila decided to hang back and do some more exploring in and around Nicaragua. From Granda, it was a 60 mile ride to the Costa Rica border and another crazy crossing. This time we broke our record, over 4 hours standing around in blazing heat to cross the border.

There were two Costa Rica bike clubs crossing into Nicaragua. 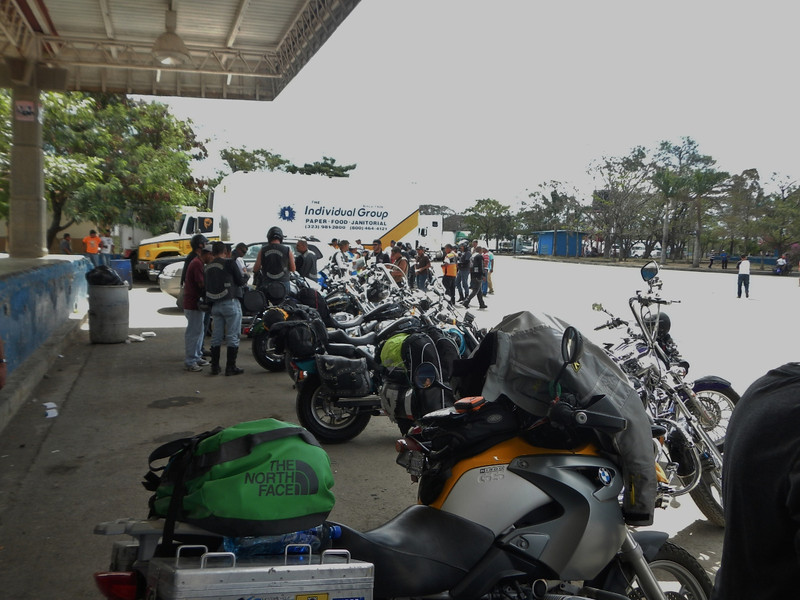 Most of the bikes were Honda’s decked out to look like Harleys but the club president, who looked every bit as bad-ass as a serious club rider in the US, had a 2006 Street Glide FLHX, almost the same bike as my old Harley. We struck up a conversation about the bike, it was brand new to him and it was clear he had the best bike of the bunch by far and he was extremely proud of it. One, problem, he didn’t know how to work the radio! Ha! I was an expert so I gave him a short tutorial and soon he had the music blasting.

There were two girls with the group, one of them was the president’s girl. They had riding boots with impossibly tall heals. 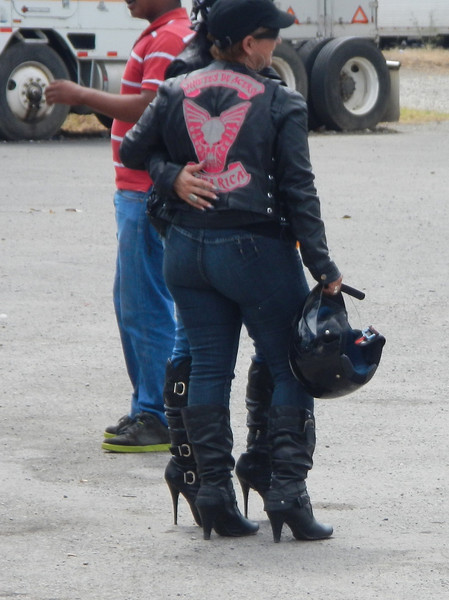 Ok,,,, I’m not making this up, and I know it’s true because they had their names on their vests… their names were Ginger and Mary Ann! Oh my, the age old question was on all our minds… 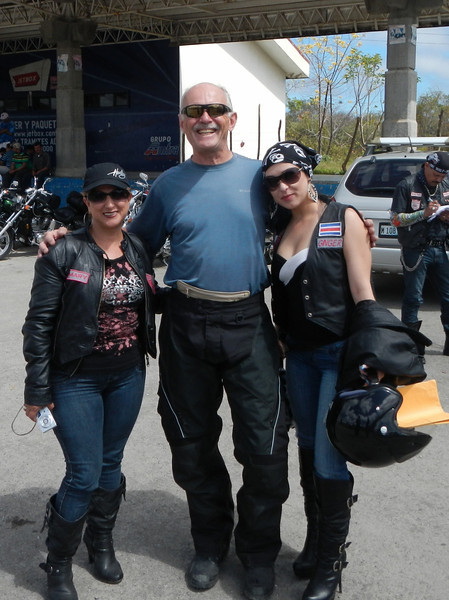 Chatting with the other bikers added some entertainment to the wait. I left the president a Harley 105th Anniversary sticker I had in my bag. He was pretty happy about that.

The rest of the border crossing was almost too painful to recount but it involved many trips back and forth to various windows, photocopies, stamps, more stamps and purchasing of insurance. Eventually we got through and blasted to the beach arriving well after dark.

Time to go, the beach is calling and we have a river tour scheduled for this afternoon. Tomorrow we’re riding up into the mountains to check out the local volcano!

Another border crossing today after a short ride from our hotel in Choluteca Honduras. We were in a pretty nice place that was recommended called the Hacienda Gauliqueme. 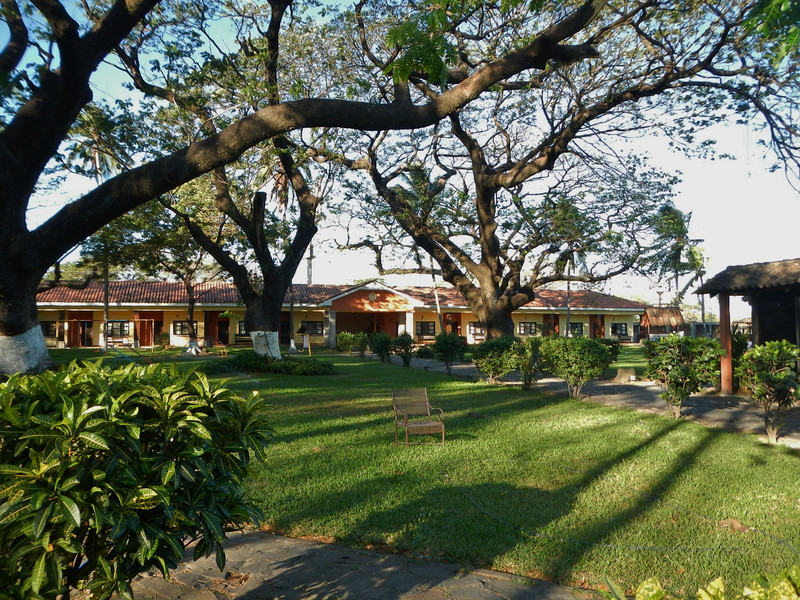 $80 USD included a full breakfast. After a HOT day riding we ended up directly in the pool.

The goal for today was Leon, Nicaragua, a short 116 mile run but it included a border crossing so we decided to leave at 9:30 to leave plenty of time.

The road, CA-3 was full of huge pot hole craters, all of the cars and trucks looked like they were being driven by drunkards as they swerved from side to side on the road. I passed one semi on the right because he thought there were fewer pot holes in the oncoming traffic side of the road. The danger, of course, is that he could swerve at any moment back to the right as I was passing. Strangely enough, this all seemed perfectly normal. Deby and I did pretty good avoiding the craters when BAM I hit one hard enough that I thought I should pull over and check my front wheel. Since it was nearly 100 degrees I spotted a tree and headed for it. As I got closer I saw some kids were standing there with something in their arms. I took a few pictures. 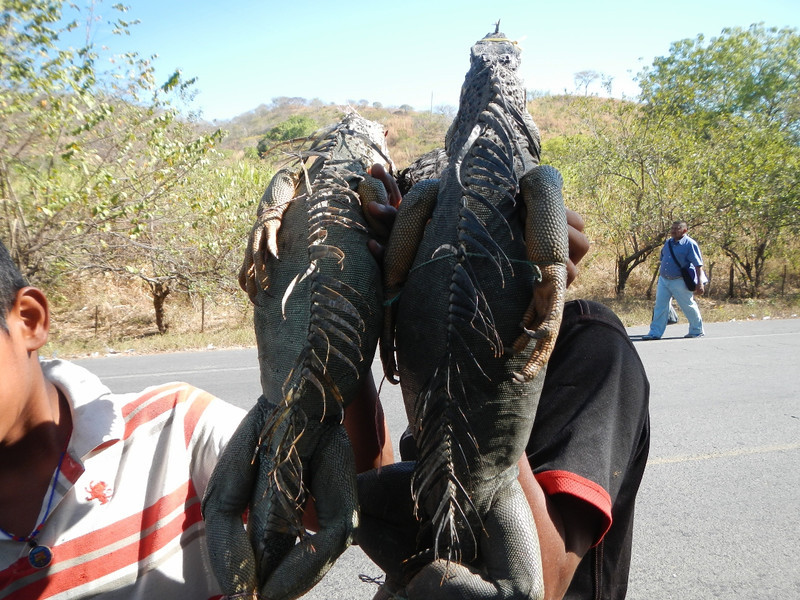 Huge Iguanas! What is that about? They were very proud of them and loved showing them off but I couldn’t figure what they were doing with them. Planning on selling them? Eating them? Who knows?

Thanks to my reinforced Excel rim from Woody’s Wheel Works my rim and most of the bike seemed to be intact. When we got to the border I took inventory of all our rims, Dave’s didn’t fare as well.

Hmmm, probably OK for now but we’ll have to keep an eye on it.

The border crossing was slightly easier today and we were through in only about 2 hours. This crossing is off the PanAmerican Highway so I think it was a little lower key. I took a couple of pictures.

At the first stop to get our exit stamp a crowd forms around the bikes as usual. 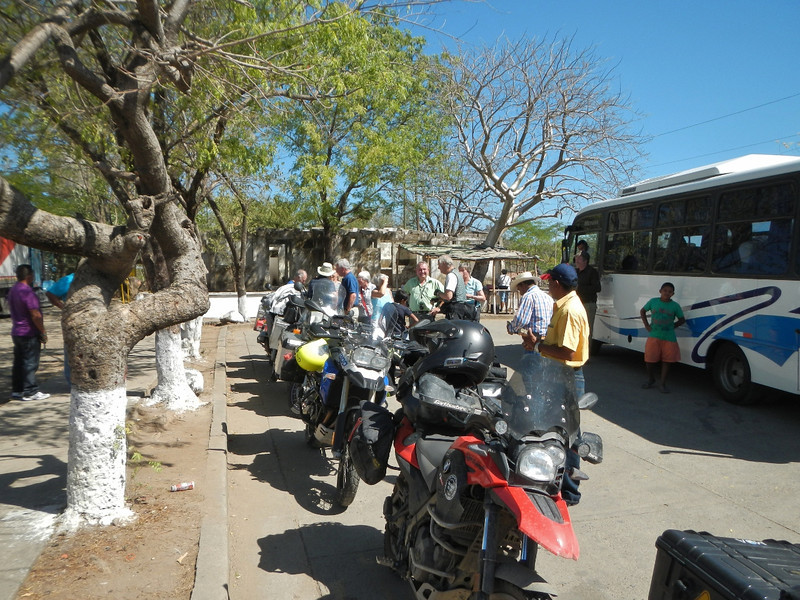 Passports were processed at a folding table out on the deck, nothing formal here. 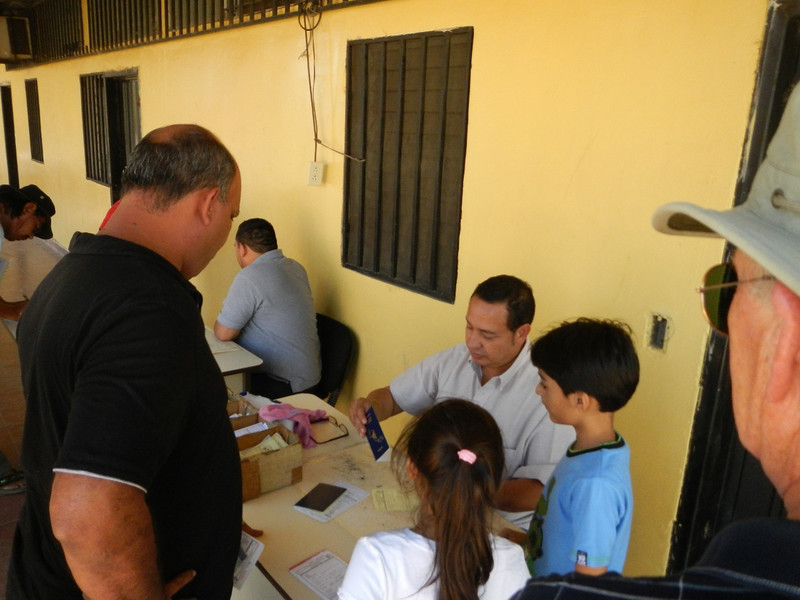 At the second stop to import the bikes Deby was surrounded by kids amazed by the great white gringo woman moto bike rider.

In Nicaragua the road improved enough that I took out my camera for a few drive by pictures. This little kid was driving his herd all by himself, when he saw us he gave me a big wave. 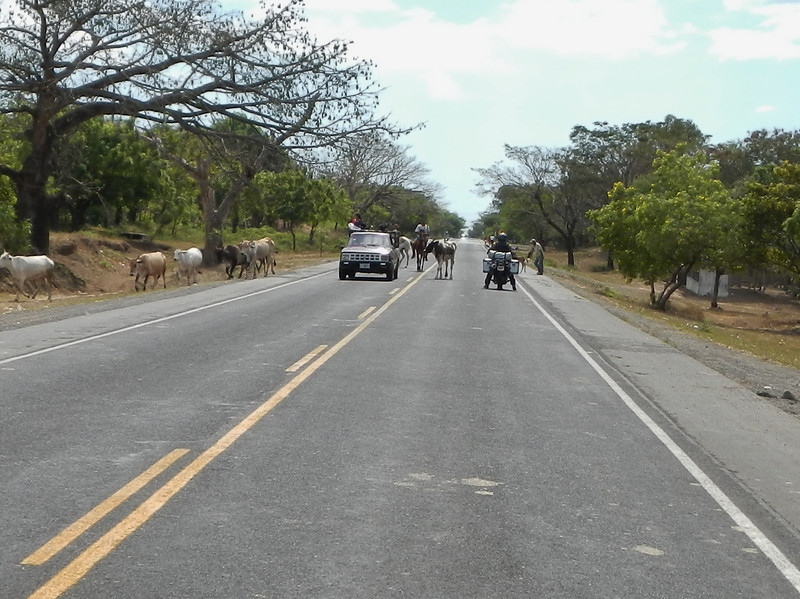 All this is perfectly normal to us now.

We got to Leon in the early afternoon and somehow we all managed to get split up. Deby, Michael and I were together and Dave was on his own and Keith and Jim were somewhere looking for Dave. The three of us were stopped at a hotel and Deby saw Dave ride past a side street, she ran full speed after him in her riding boots and caught him a few blocks away. Next Michael and I went to look for Keith and Jim and found them a few km’s south of the main part of town. By 4:00 we were settled in the Best Western Hotel and had time to get to a nearby bar to watch the kickoff of the Superbowl.

My GPS records a detailed track of my path. Here is my tour of Leon while looking for the hotel and lost riders.

What the track doesn’t show is how many times I circled those blocks. Keep in mind, it was killer hot and this is a crazy busy city with narrow one way streets packed with traffic, people, bikes…. and well, you get it.

After dinner Deby and I skipped part of the Superbowl (we missed the power outage) and went for a walkabout around town. There must have been some kind of festival because there were bands on playing on the streets, people were everywhere, booths and vendors were selling in full swing. It was a hot night of people, music, food, traffic and general craziness every where – we loved it. I only wish I would have brought my camera.

Tomorrow we are going to have a short day riding to Granada and hope to meet up with our friends Tad and Gaila who are on a 1 year motorcycle journey. You can read their blog HERE.

You can see more pictures of Nicaragua HERE, and don’t forget you can track our progress real time on SpotWalla HERE. Thanks for following and we love the comments.